Architect Fokke van Dijk on the EMA building: ‘Not an everyday experience’

The EMA’s new building was completed on 15 November 2019, meaning it was realised within 18 months, which is exceptionally fast. We spoke with the architect Fokke van Dijk, from the Central Government Real Estate Agency, to look back on this very special project where ‘all the pieces fell into place’.

The EMA is the European Medicines Agency, and in May 2017, their gigantic office, previously based in London, had to find a new headquarters in Europe because of the UK’s departure from the EU. So this time, the project to design the new office did not begin with an architect’s pitch, but a pitch from European countries. The EU member states – in whose hands lay the decision – opted for the Netherlands, and specifically for a completely new building in Zuidas.

‘It was a really exciting project’, says Van Dijk. ‘When we learned about the relocation of the EMA, we immediately started to sketch out a design. Of course, you have to be able to show them something to make your pitch. An existing building would also have been an option, but would have made it more difficult to meet all the requirements. For example, the building had to be easily accessible, have enough space for large conference rooms, and there had to be housing and facilities for (international) employees within a reasonable distance. There also needed to be enough hotel capacity in the area. So, in cooperation with the Ministry of Health and the City of Amsterdam, we got started. We made a joint decision in favour of this plot, and a new building in Zuidas, so that we would be able to satisfy all the requirements. And – another important requirement – we had to incorporate the 18-month delivery time into our design, so that the EMA would be able to move in and start operating quickly.’

Official start of construction, May 2018

‘Because of that short construction period, we had to approach the design process from a different angle’, continues Van Dijk. ‘We certainly made no concessions, but we did take that rapid delivery time into account in the design by, for example, including a lot of prefab solutions and opting for a steel construction.’ And because the team knew in advance what the time constraints were and the high standards that they had to meet, they were ultra focused. ‘Of course you have to make certain choices: a complicated design like the Valley project could simply not be realised within 18 months, and that kind of design would not have suited the EMA anyway. At the Government Real Estate Agency, we looked primarily at how we could set up an office of this size as efficiently as possible, meet all of today’s standards, and finish the job within 18 months.’

Ready to move in

The building was completed two months ago. ‘It was a wonderful project to work on’, says Van Dijk. ‘Precisely because of the short turn-around time, everyone was entirely committed. They were even working 24/7 towards the end. There was no room for mistakes. It was very clear to us, and to the contractor partnership of Dura Vermeer and Heijmans – we were determined to finish the building properly and on time, but above all safely. The project got underway in mid-2018, and 18 months later – in November 2019 – it was ready. Meeting that deadline took a lot of investment in collaboration. For example, we immediately installed a cabin on the site where all the parties could come together, so that the communication lines were kept short.’

Timelapse: EMA from bottom to top 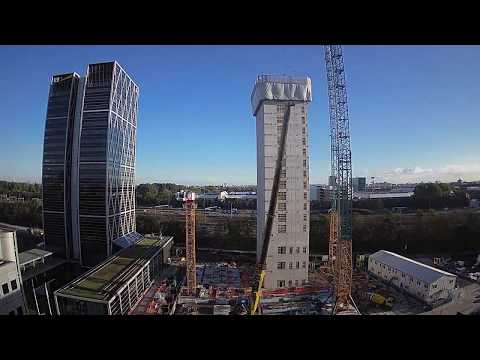 The way all the parties worked together was exactly what impressed Van Dijk the most. ‘I know that might sound like a cliché, but when you’ve managed to finish such a unique project in the Netherlands, I think you’re allowed to use a few clichés. What made this project possible was our commitment to professionalism on all fronts, and our focus on solutions.’ So did everything really go without a hitch? ‘Of course there’s always something, but in those cases, we just kept focusing on finding solutions. Everyone had their own specialty, which meant that we didn’t get in each other’s way, and there was a lot of mutual respect. Sometimes you work on a project where everything just falls into place, and that was the case here.’

‘A project that is so intense, and with this degree of time pressure – that’s not something you experience every day’, continues Van Dijk. ‘And yes, going back to normal life takes some getting used to. But I’m very satisfied with the result. The building is a good fit for the EMA, and I think the interior is really very special. The layout and that impressive green wall along the office floors – it’s very distinctive. It gives the building real character, and it also contributes to a more healthy building. And it’s really satisfying to think that over 900 employees are now working for the EMA inside the building. But if you ask me, it won’t be completely finished until the end of March 2020 when the artwork is installed on the forecourt. I hope you’ll come and report on that too!’

From drainage ditch to luxury hotel

Where once there was just a small drainage ditch, now a Van der Valk hotel has risen up from the ground – a ‘Valk Exclusive’, no less. Adriaan van der Valk tells us the story of how the new hotel in Amsterdam’s Zuidas has come to grace our skyline. And also whether they will be welcoming any ‘trial guests’ anytime soon.

Work on and near A. Vivaldistraat

We are planning to install the underground infrastructure needed to provide the future European Medicines Agency offices and the Van der Valk hotel with water, heat and power. This work is scheduled to commence in the second half of November. It will be completed at the beginning of May 2019.