First keys handed over for The George

The George is almost finished, and the first residents have already been given the keys. But it’s not yet completely ready. Head foreman Michel Zondag: ‘A completion like this is always hectic, because everything comes together.’ 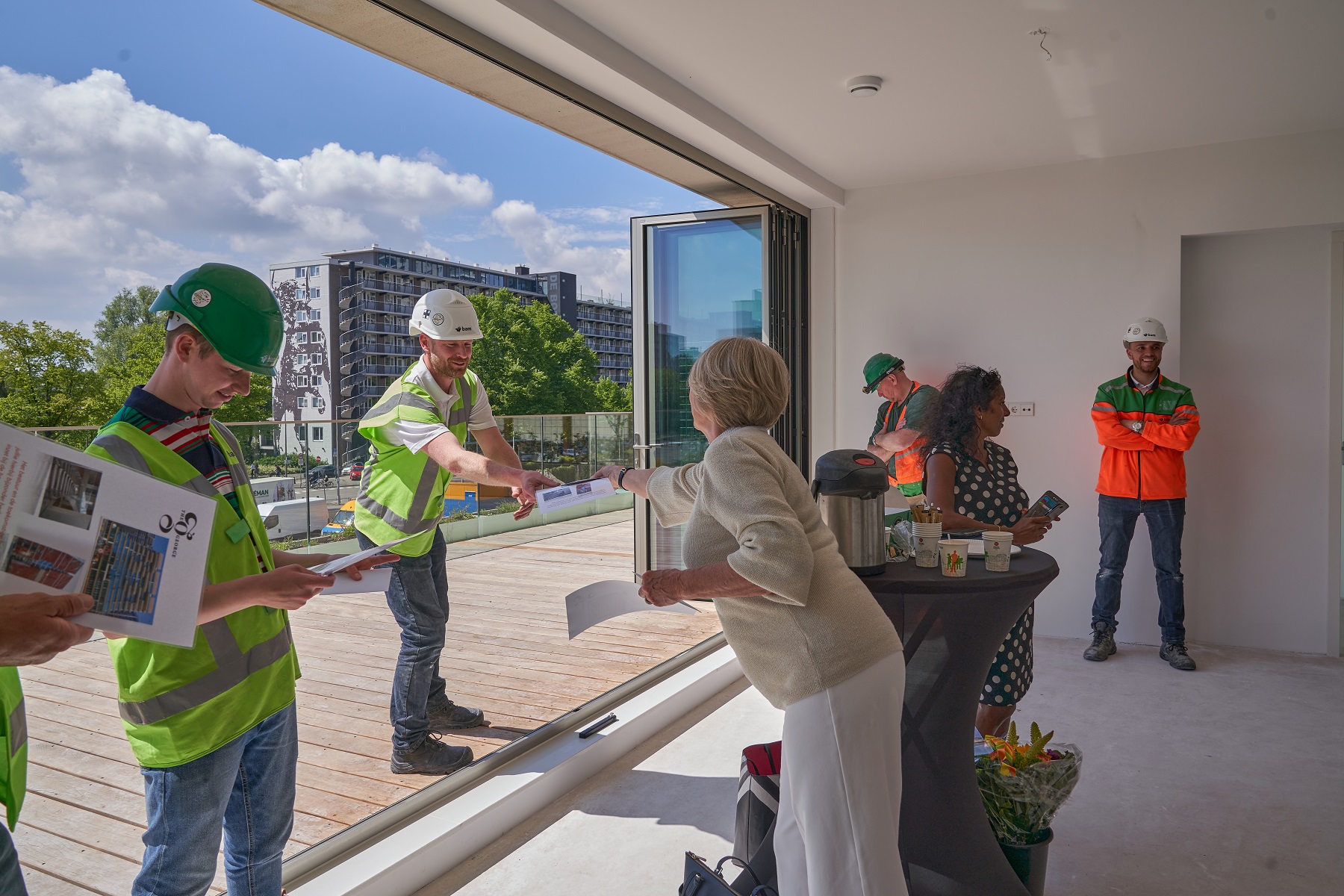 The handover of the keys for the 47 luxury apartments is being done in phases: residents in the lower floors already have their keys, but the transfer of the final, uppermost apartments will happen in early July. But this doesn’t mean that Michel Zondag’s team from contractor BAM Wonen is already taking it easy. ‘The period just before completion is actually extremely busy. It’s the time of the final inspection for safety and functionality purposes, everything needs to be clean, and the gardeners are hard at work finalising the landscaping plan.’ Jobs are being ticked off on a daily basis, but there are always more things to be done. ‘That’s normal in this phase. There are always further minor surprises. It’s not a problem, but it needs to be sorted.’ 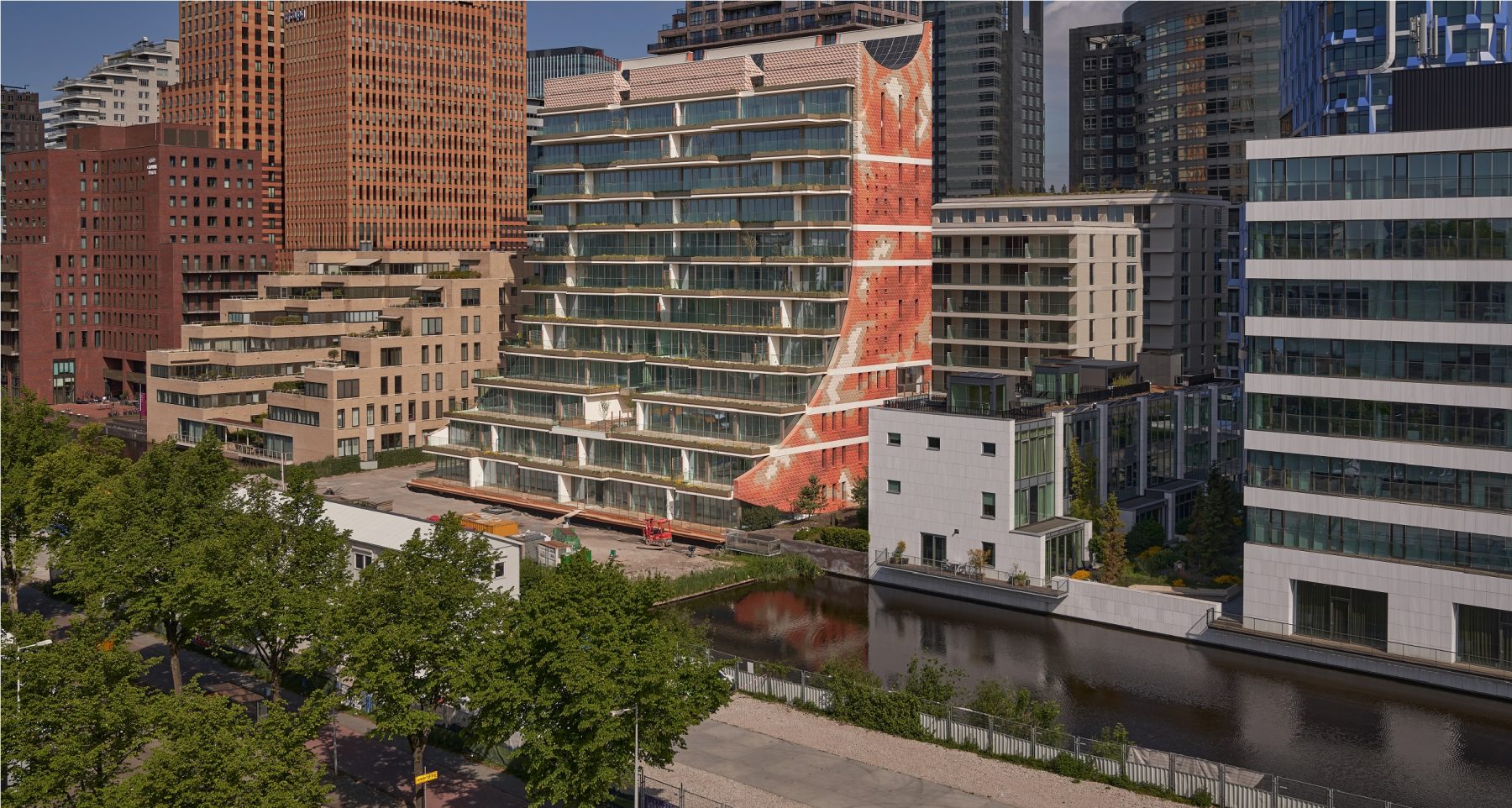 Coronavirus was a slightly bigger surprise. Zondag: ‘Obviously, it came as a shock, but that applies to everyone. We also had a few people ill, but fortunately they recovered. In terms of construction, the main thing we noticed was the delay in the supply of certain materials, such as the large planters that had to come from Poland. We made up for lost time by moving other work forward and using more people to install the planters when they eventually arrived. Of course, everything was done according to the national coronavirus guidelines.’ The building site now also looks slightly different: there is line-marking everywhere and no more than two people are allowed in the lift at any one time. ‘In spite of everything, we managed to work through and achieved the first key handover on time.’ 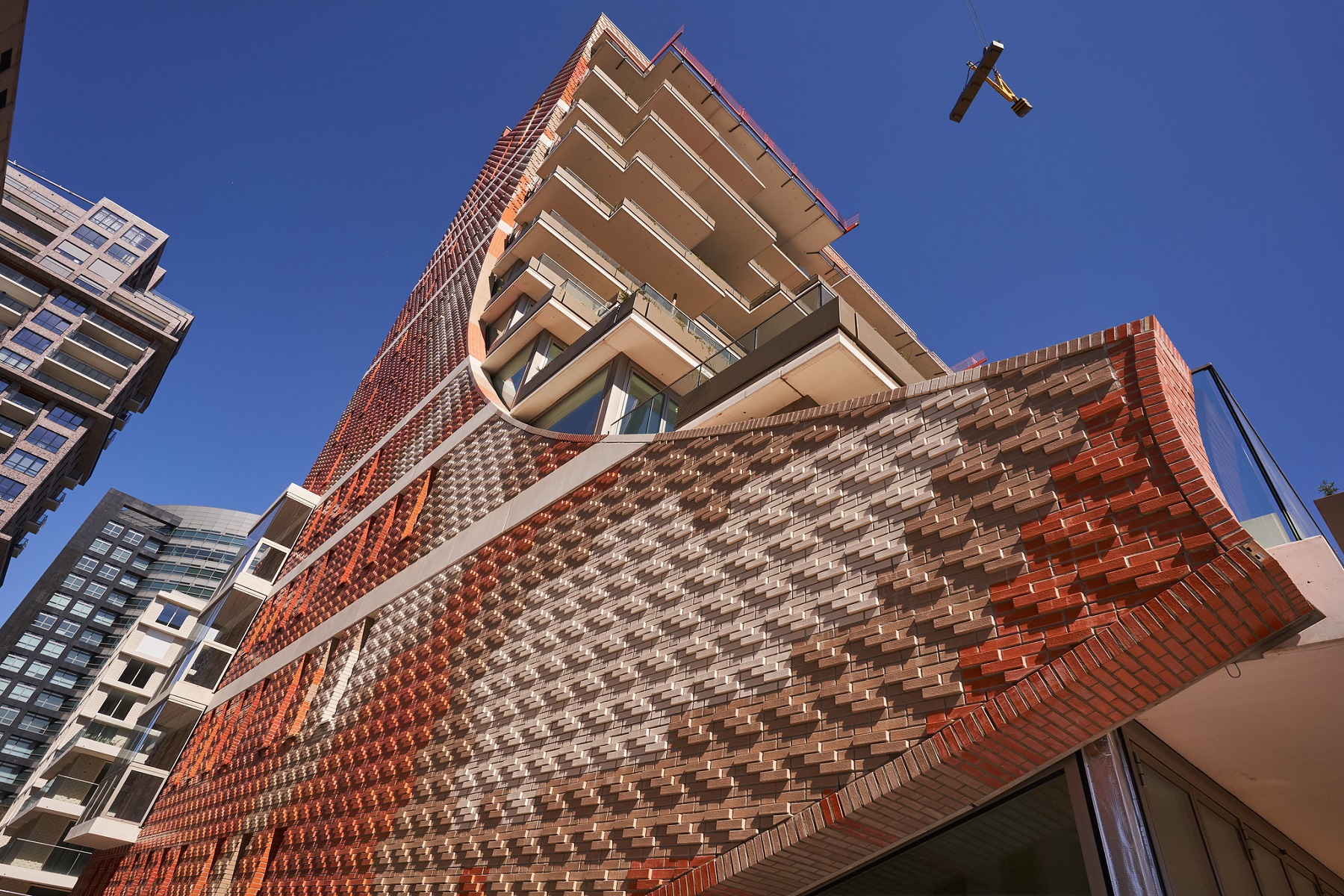 Is a key handover like this a particularly special moment? Zondag: ‘It is. We’ve been involved in the construction since the pile-driving started in January 2018. So, it’s like watching the building grow. You also get to know some of the residents, because they’ve regularly visited to check out progress on their apartment. That makes the completion more personal.’ Besides, before the key handover, there’s always a preview, two weeks in advance. ‘Residents then take a final look to check that the tiles in the bathrooms are the right ones, for example. Fortunately, that actually always goes well. This year, we completed the two residential complexes that make up The Gustav, next to this. There were virtually no issues there either. Above all, people are glad to be able to move into their apartments. ‘

All materials are of a high spec
Marcel Steinbach 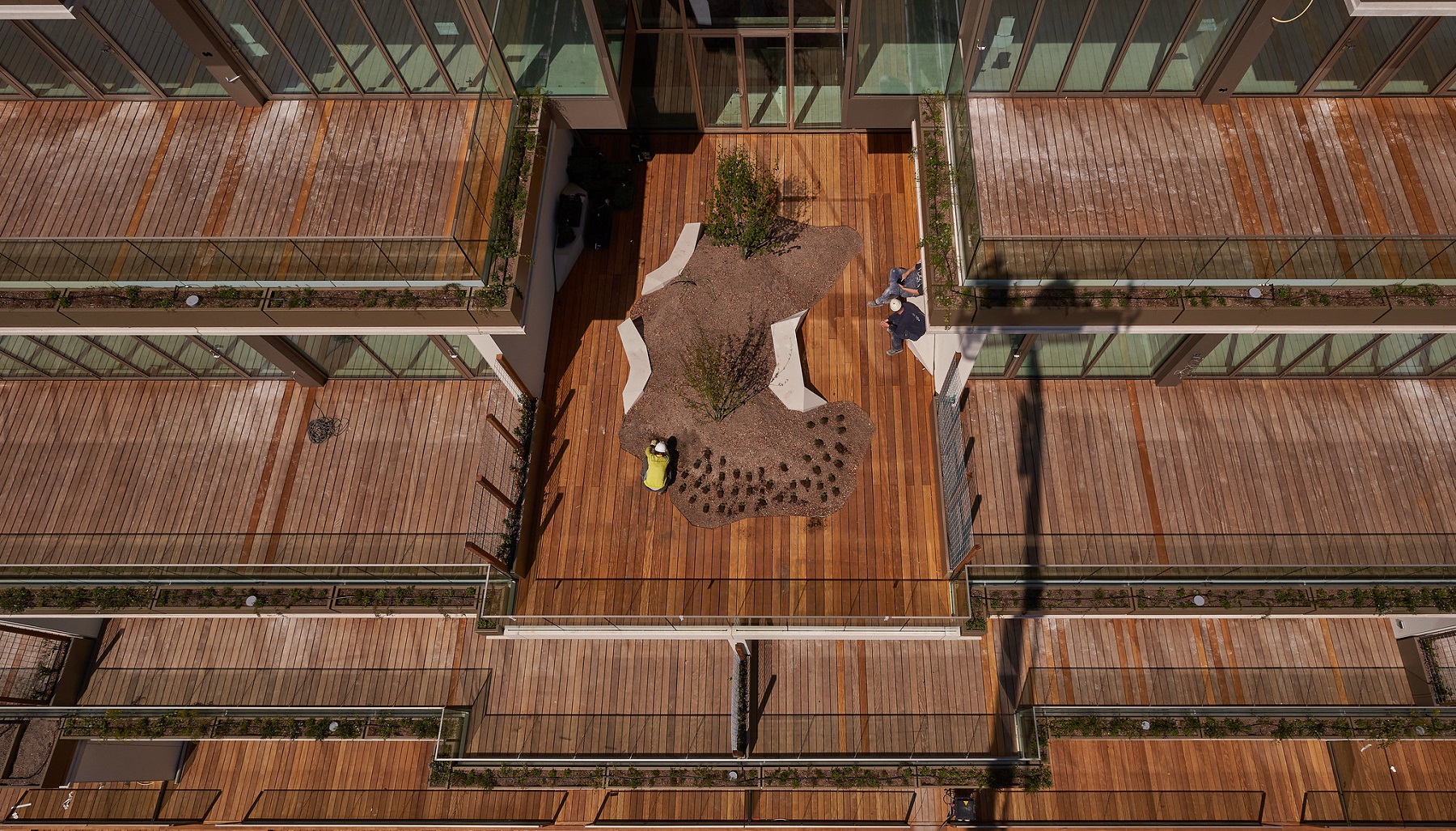 The future residents’ excitement is easy to understand. The George, designed by Liesbeth van der Pol from architects’ firm Dok Architecten, is spectacular. This is not only because of the unusual shapes, but also the amount of greenery and special finishing, both inside and out. Zondag: ‘This is no ordinary building. It was obvious to me from all the people involved in its construction – all of them were specialists in their fields. Take the landscaping plan, for example. It’s not just an addition, but a real part of the total picture.’ The same applies to the façade made using special bricks placed in a complex colour sequence. ‘That’s highly detailed work, where it’s easy to make mistakes.’ The interior is extraordinary as well, with the communal staircase as the highlight. ‘The finishing is also very high spec. Then there are the outdoor areas that place real demands on the structure. The biggest balcony weighs around 20 tonnes, for example.’ 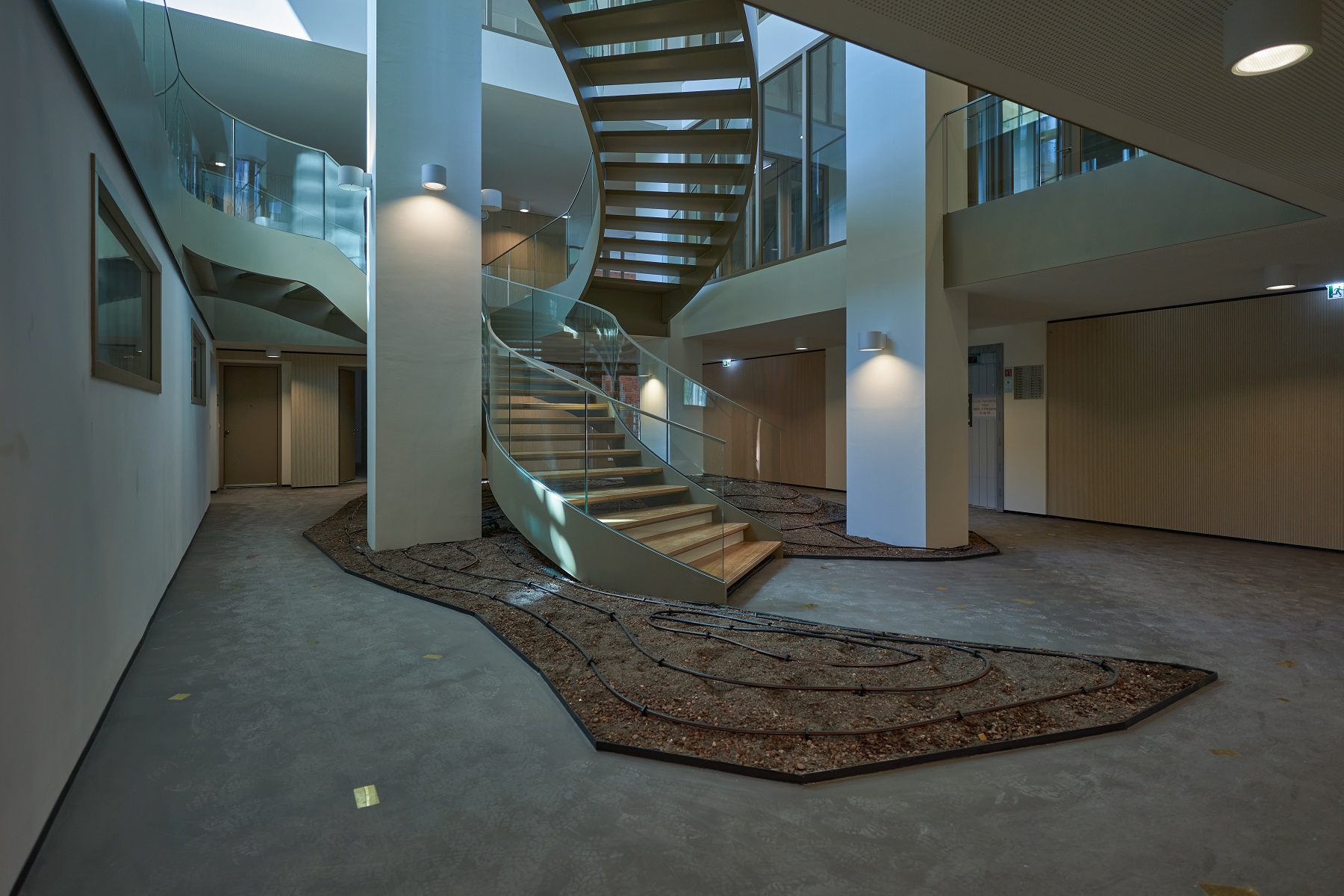 It will not be long before Zondag moves onto another project, just nearby: Crossover, in Kop Zuidas, the most northern part of Zuidas. In the area around The George, there is plenty of work for the City of Amsterdam to do. Zuidas will be working on the quay wall between Op Zuid and The George next to the new residential complex and widening De Boelegracht.

Plan for Art Bridge across De Boelegracht open for consultation

It has taken a while, but the plan for the new Art Bridge (‘De Kunstbrug’) across De Boelegracht is now open for consultation. A briefing for local residents about the design was held on 12 April 2022. Interested parties now have until 14 May 2022 to submit their opinions.
April 6, 2022

The Conservatorium van Amsterdam music academy will not be setting up an annex in the monumental buildings known as Kapel & Convict in Beatrixpark after all. Prices on the construction and energy markets have increased so explosively that the financial risks are too great.
April 4, 2022

The former main building of the Amsterdam British School in Fred. Roeskestraat is being demolished. The school moved to new accommodation in Havenstraat last year. The location will now be used for social housing.
More posts