The new Amsterdam Zuid station is being designed around pedestrians

The new Amsterdam Zuid station will provide access to trains, trams, buses, the metro and bicycle storage facilities. But none of these modes of transport will take centre stage, because the new-look transport hub is being designed around pedestrians. 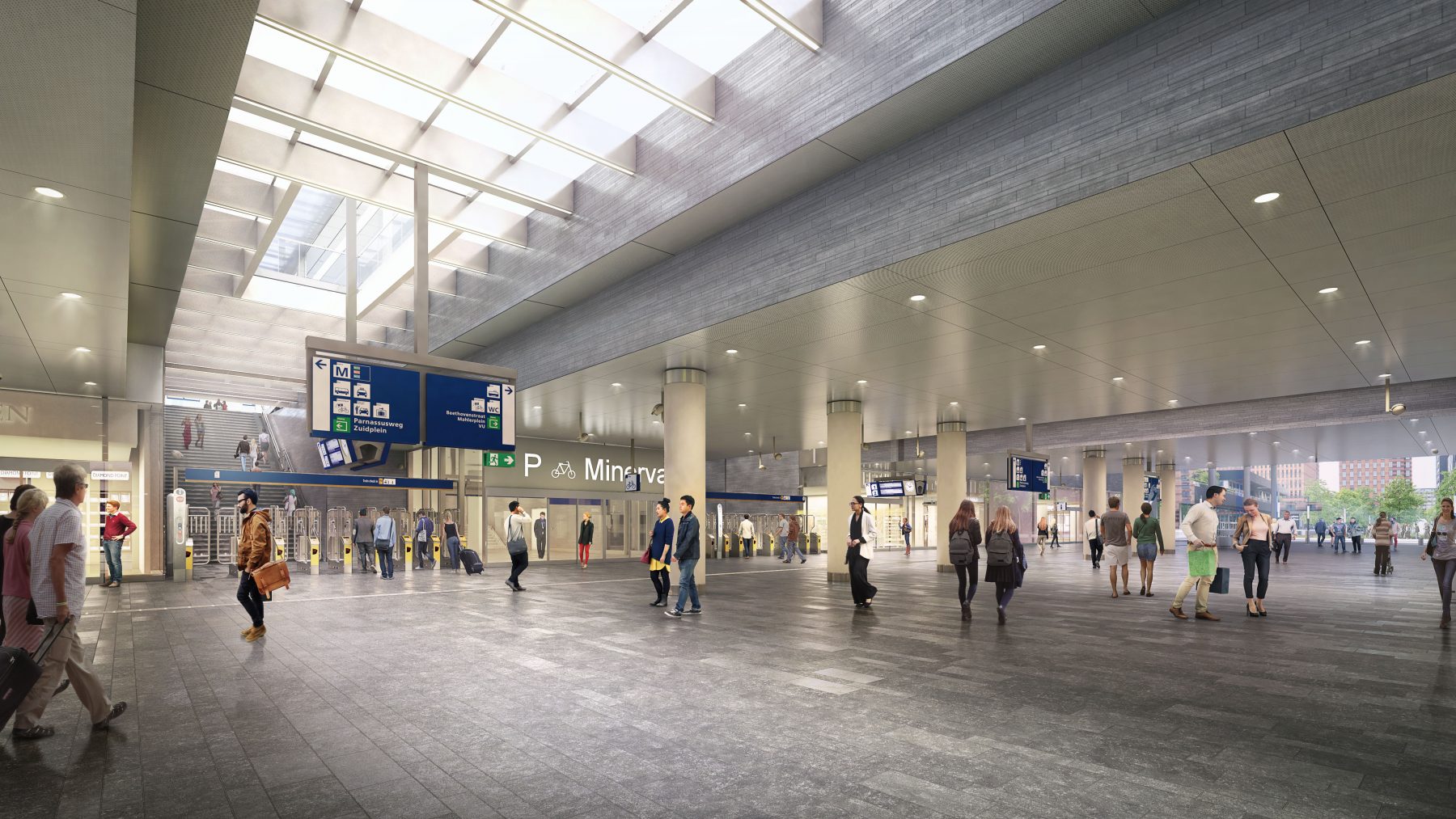 Inside the new station, pedestrians will be able to walk from one passageway to another, protected from the rain and elements. Outdoor walkways will also be covered, to make walking to and from bus and tram stops more pleasant. Bus and tram connections will also be located much closer to the station than at present. In addition to these pedestrian routes, there will also be a route for cyclists to and from the station’s bicycle storage facilities, which will be located to the west of the second station pedestrian passage which is currently being built (the Brittenpassage) and to the east of the existing entrance (the Minervapassage). That means that pedestrians and cyclists will not need to cross paths. That might seem like a minor detail, but it’s actually crucial. Designing a public transport hub so that people intuitively know the best route to take as a pedestrian so that people don’t bump into each other and so that there’s enough space on the stairways and platforms, that is a fine art. Traffic expert Jeroen Stegeman and pedestrian flow specialist Vivian Scheepers have spent years working hard on the design for the new station. 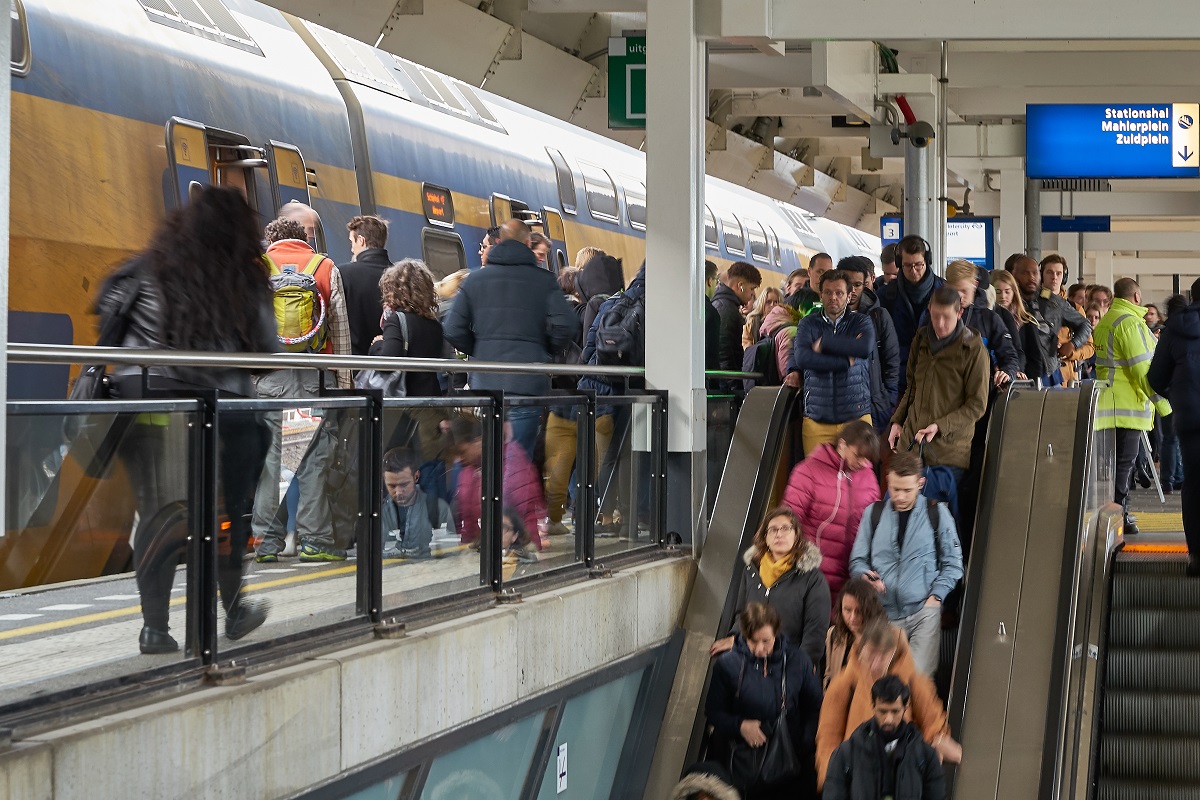 ‘Whenever you work on a design or plan for a public transportation hub, you always have to ask yourself what will the effect on pedestrians be?’, says Stegeman. ‘How many pedestrians will there be? How will they get to and from the platforms? And what about bus stops, tram stops, the metro or bicycle storage facilities? How will you ensure that they can move around safely and comfortably?’ So, pedestrians were an important – often decisive – part of designing the new Amsterdam Zuid station. ‘When our simulations revealed that there was congestion or that pedestrians were getting in each other’s way, we went back to the drawing board’, says Scheepers.

As early as 2013, Stegeman was involved in the question of what this public transportation hub should look like and how wide the platforms, stairways and passageways should be. ‘The process starts with transportation models at the national and local levels. The Dutch national railway companies provided an estimate of the expected number of train passengers, while the municipality of Amsterdam made forecasts of the number of users of urban public transport and cyclists. That gave us an initial picture of the number of people who would be travelling to and from the station, changing between transportation modes at or near the station, what means of transport they would be using and how frequent those services would then be.’

But that is just the start. The next step is designing a public transportation hub that can handle those pedestrian flows with ease. We use computer simulations to make further refinements. The simulations can show you the difference between the morning and evening rush hours for example, explains Stegeman. ‘In the morning rush hour, the emphasis is on people arriving and leaving the station at the same time. The width of stairways and escalators needs to be calculated accordingly. In the evening rush hour, people arrive on the platforms more gradually and the main question is how much space you need to keep everyone waiting safely and comfortably.’

See an example of a simulation

At the same time, there are certain constraints on what you can do, of course. In terms of its physical location, Amsterdam Zuid station is wedged between the two carriageways of the A10 motorway. To create more space, the motorway will be diverted through a tunnel underneath the station, but the nearby buildings (ABN AMRO on the south side and the WTC to the north) will still be there. In addition, Amsterdam Zuid is going to be expanded with the addition of an extra island platform with tracks on both sides. All these factors limit the space available for travellers, so that meant some creative solutions were needed during the design phase. One of those solutions was a second pedestrian passageway running under the station – that became the Brittenpassage, which is currently being constructed. In addition, the existing Minervapassage will be made considerably wider. Another solution was to separate the pedestrian zone from cyclists wherever possible, both inside and outside the station, as this would also give everybody more space. 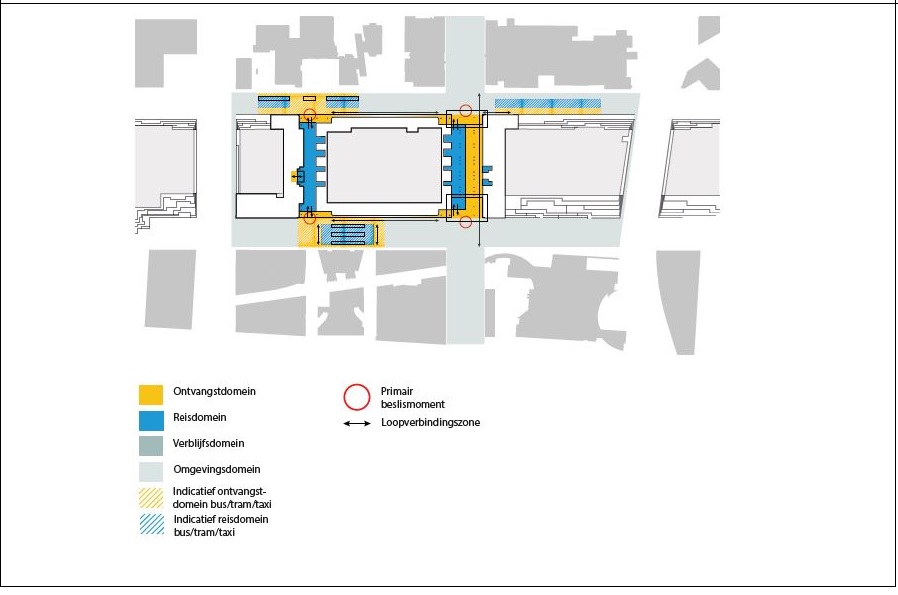 Going with the flow

But there were still improvements to be made to the design, says Scheepers. ‘In one of our first designs, cyclists had to go outside after leaving their bicycle in order to check in for their train or metro journey. But in the improved design, they will be able to walk straight from the bicycle parking facility into one of the pedestrian passages.’ Other design improvements included making the Minervapassage even wider (it will now be almost as wide as Zuidplein itself) and improved positioning of the check-in and check-out gates and passenger information boards, in order to minimize congestion at important points in the station. ‘There are a few important rules when it comes to pedestrian flows: think carefully about when travellers will need to choose a specific direction, entrance or platform entrance. Because that is where you will need to determine the main flow directions. Think about the key locations and make sure there are absolutely no obstacles there – such as a pillar, for example. And try to avoid flows of pedestrians having to cross – people walking from the train to the tram, for example. The decisions we made about all these things during the design phase will determine whether the new-look Amsterdam Zuid station will be a safe, efficient and pleasant place for travellers.’

This is the first episode in a series about the work going on behind the scenes on the renovation of Amsterdam Zuid station. The station will become the country’s fifth busiest station, after Amsterdam Centraal, Utrecht Centraal, Rotterdam Centraal and Schiphol Airport. How do you turn a mainly local station into a true public transportation hub?

In the weekend of 18 and 19 December 2021, we installed the final two switches in the metro tracks. At the same time, 1,000 sq. m. of floor was replaced from the removable railway platform for tracks 1 and 2. The work went smoothly.
reizen-en
December 14, 2021

On 2 December 2021, the North Sea Canal Area Environmental Service (‘Omgevingsdienst Noordzeekanaalgebied’) granted the environmental permit for the renovation work on Amsterdam Zuid station. The permit will be open for consultation until 14 January 2022.
reizen-en
December 6, 2021

Next to Beethovenstraat, a new switch was added to the metro tracks during the weekend of 4 and 5 December 2021. This was the third weekend in which we have been installing new switches. We also replaced the temporary platform that serves railway tracks 3 and 4.
More posts