The transformation of Tripolis Park has reached an important phase. A year and a half after the start of construction, work is now underway on the exterior. It is turning out to be quite a puzzle. ‘The original complex has more than 1,700 different window frames, all of which we had replicated.’ 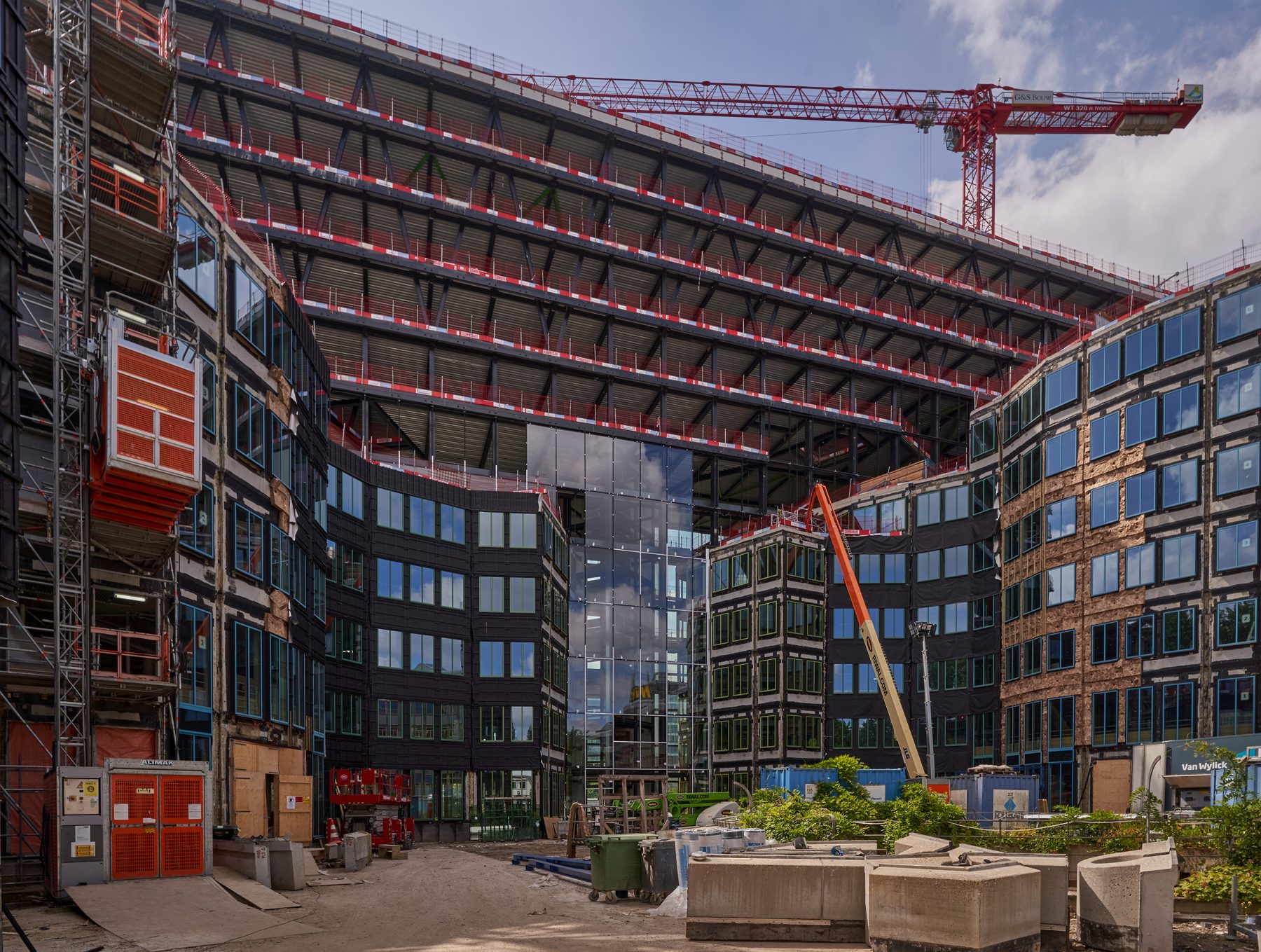 René den Braber squints as he looks up at what appears to be a gigantic wall of glass. The planning engineer from G&S Bouw has actually been working towards this for the last eighteen months. ‘The frame is complete and you can now see how everything is coming together nicely’, he says proudly. The so-called ‘landscraper’ – the massive structure being built across part of the existing Tripolis towers – has had glass sheeting fitted in recent weeks. If you carefully look through it, you can just make out the contours of one of the three original Tripolis buildings. ‘That’s exactly what we intended. Soon, when there are tenants in it and the lights are on, you’ll have an even better view of the existing building.’

The renovation of Tripolis Park on the edge of Zuidas can certainly be called an ambitious project. The three existing towers in the iconic complex need to stay intact and a completely new building – the spectacular landscraper, a horizontal skyscraper – will form a bridge between two of the three towers. This will ensure that architect Aldo van Eyck’s design philosophy is preserved, while also creating more office space. The third tower is currently let to Nikon and work will be done on that at a later stage. There will be apartments in it.

Integrating an existing building within an ultramodern complex presents a real challenge, says Den Braber. His colleague Niels Beentjes, also a planning engineer for G&S Bouw, completely agrees. Together, they guide us around the site. ‘I’ve mainly been involved in the foundations and concrete cores’, explains Beentjes. ‘Building over the existing towers was a complex process. We had to put the foundations for the landscraper in the basement of the existing Tripolis complex.’ Den Braber continues: ‘After all that, it’s my job to make it look attractive’, he laughs. ‘In other words, the exterior. That means the façade, roofs, window frames.’

And that is far from easy, as soon became obvious. Den Braber: ‘We replaced all the original window frames, but soon realised that they were all slightly different dimensions. And they were also all different colours. In the end, we had to order more than 1,700 different sizes.’ It certainly sounds like quite a challenge. But Den Braber shrugs his shoulders. ‘It’s all part of the job. And it’s particularly satisfying when it all comes together nicely.’ His colleague Beentjes adds: ‘We have the good fortune that G&S Bouw was also the contractor that worked on the original Tripolis back in the 1990s. That meant that all the construction drawings have been preserved. There are even people still working here who were on that original building site.’ 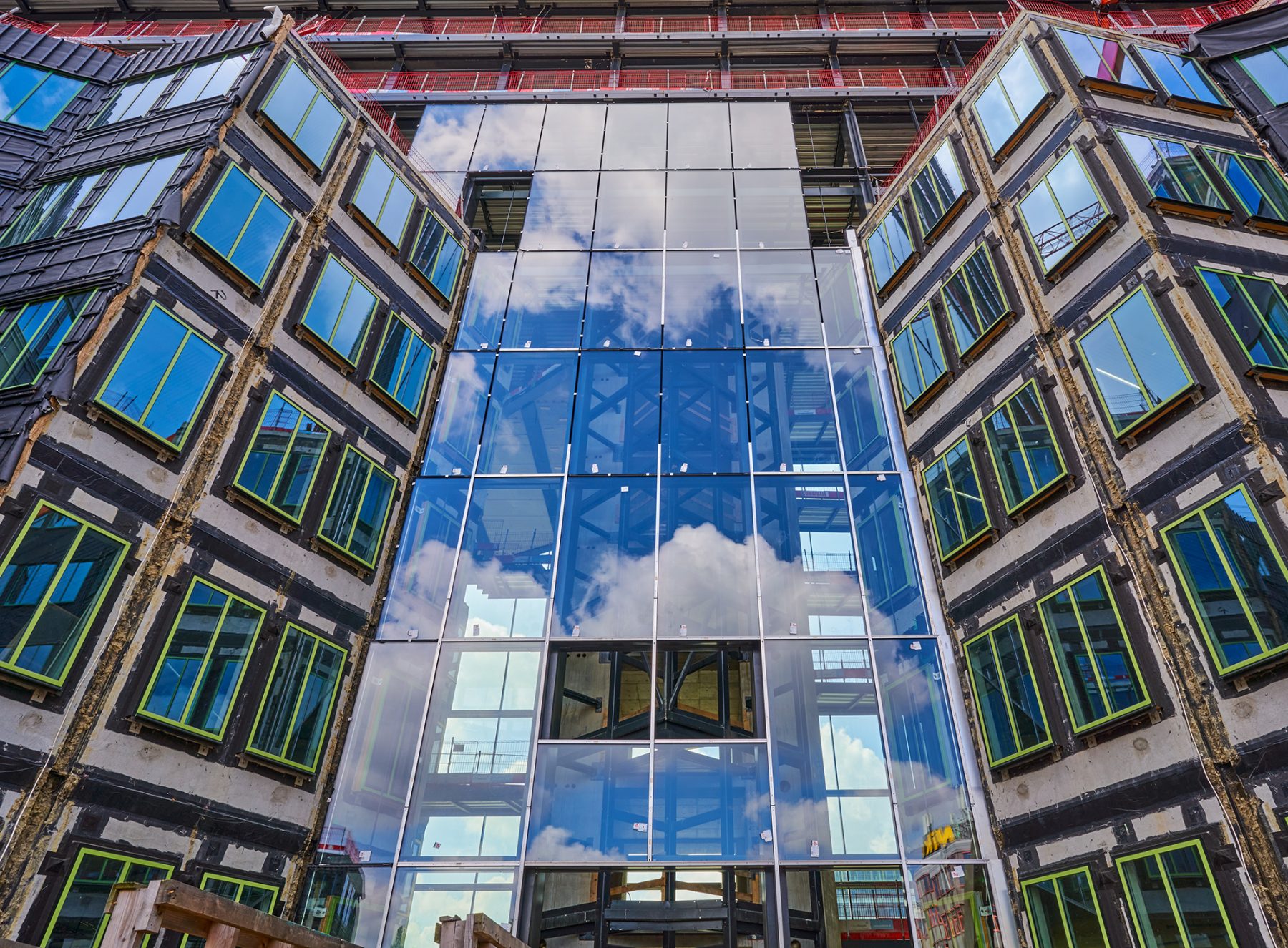 Den Braber takes us to what is known as a mock-up. It is a customised replica of a small piece of façade from one of the Tripolis towers. ‘We wanted to keep the look and feel of the old façade, but the original material is no longer available’, he explains. He rubs his fingers across the slats of wood on the mock-up. ‘So, we carried on searching until we found a modern, high-quality version. We opted for Western Red Cedar Wood, which comes from Canada. It’s impregnated in the United Kingdom and then comes to the Netherlands.’ And even then, you’re still not finished, he adds. ‘We spent a year working on this mock-up. Each time making minor adjustments. We constructed it and dismantled it three times, until we were able to say: Yes, that’s the way it should be.’

All of the exterior façades for Tripolis Park should have been completed by the end of the summer, says Den Braber. After the walls, ceilings and roofs, work will start on the internal systems. A natural stone floor will then be laid. And that will be followed by the landscaping, adds Beentjes. ‘That will connect the whole thing together. It will be a park-like environment, with lots of plants, seating, hospitality and a gym. We’re already halfway there and making good progress. In a year’s time, we’ll be finished and deliver the shell building.’

Tech giant Uber will soon be one of the tenants at Tripolis Park. It will have its international headquarters based on the business campus. Beentjes: ‘From the very start, it was always the plan to create a campus for innovative companies. It’s great that it looks like that’s now going to happen.’

This week, the trees were hoisted up onto the roof gardens on Terrace Tower. The additional greenery will make Zuidas more attractive to new businesses, boosting the City Council’s ambition to make the area more sustainable and greener.
wonen-en
July 16, 2021

The City of Amsterdam municipal council wants to build homes on the site of the Oldschool building in Gaasterlandstraat, Kop Zuidas. To make room for the new homes, the Oldschool building will need to be demolished. Bond Heemschut, a heritage association, wants the building to be preserved because of its distinctive features, and therefore applied for the status of protected monument for the building. However, the municipality decided not to designate the building as a protected monument. The Bond Heemschut then appealed against this decision but on 9 July 2021, the courts ruled that the appeal was unfounded.
More posts