Tripolis Park completed on the outside as work continues inside

A milestone for Tripolis Park: the exterior of the building is now more or less completed and all square metres of office accommodation have been let. The contractor is now working on the interior. In this, sustainability is a very important factor. 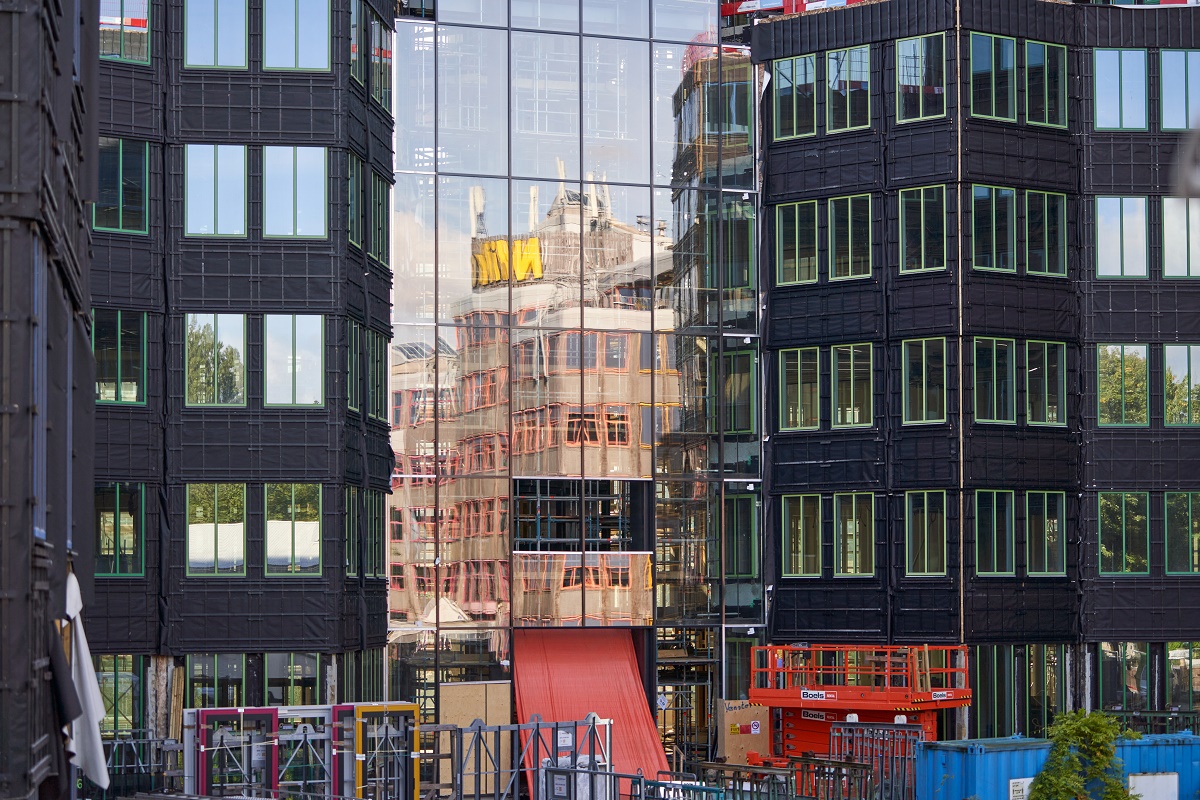 ‘The first toilet blocks are now in place. These are for ladies, these ones for gents and we’ve put gender-neutral toilets here’, explains planning engineer Chris Pitstra from G&S bouw, as he shows us around one of the Tripolis Park towers. Now that the exterior is more or less complete, they are hard at work on the interior. This involves finishing the floors and walls and putting installations and systems in place. ‘It was Uber who requested the gender-neutral toilets, since they’ll be renting one of the two existing towers’, explains Pitstra.

’The Netherlands largest lawyers’ firm De Brauw Blackstone Westbroek will soon be moving into the other existing tower. That means all of the square metres in the complex have been let. The spectacular ‘landscraper’ is suspended across the two towers and is the new building that connects two of the three iconic Tripolis towers to each other. This creates an open space that forms a natural division between the two towers. ‘That’s the atrium’, says head foreman Arnold Hilders, who has now joined us on our tour. The third tower of the complex is currently still let to Nikon. That will be worked on at a later stage. 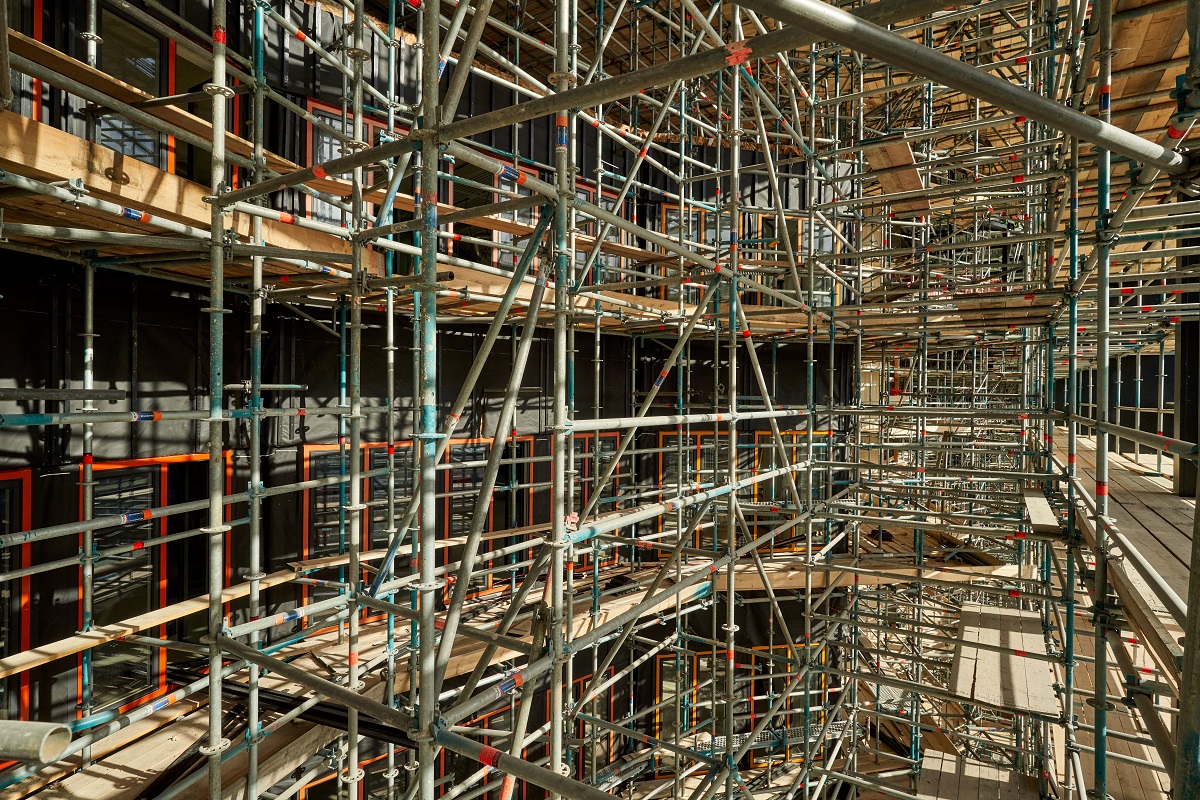 Building over the monuments designed by Aldo van Eyck 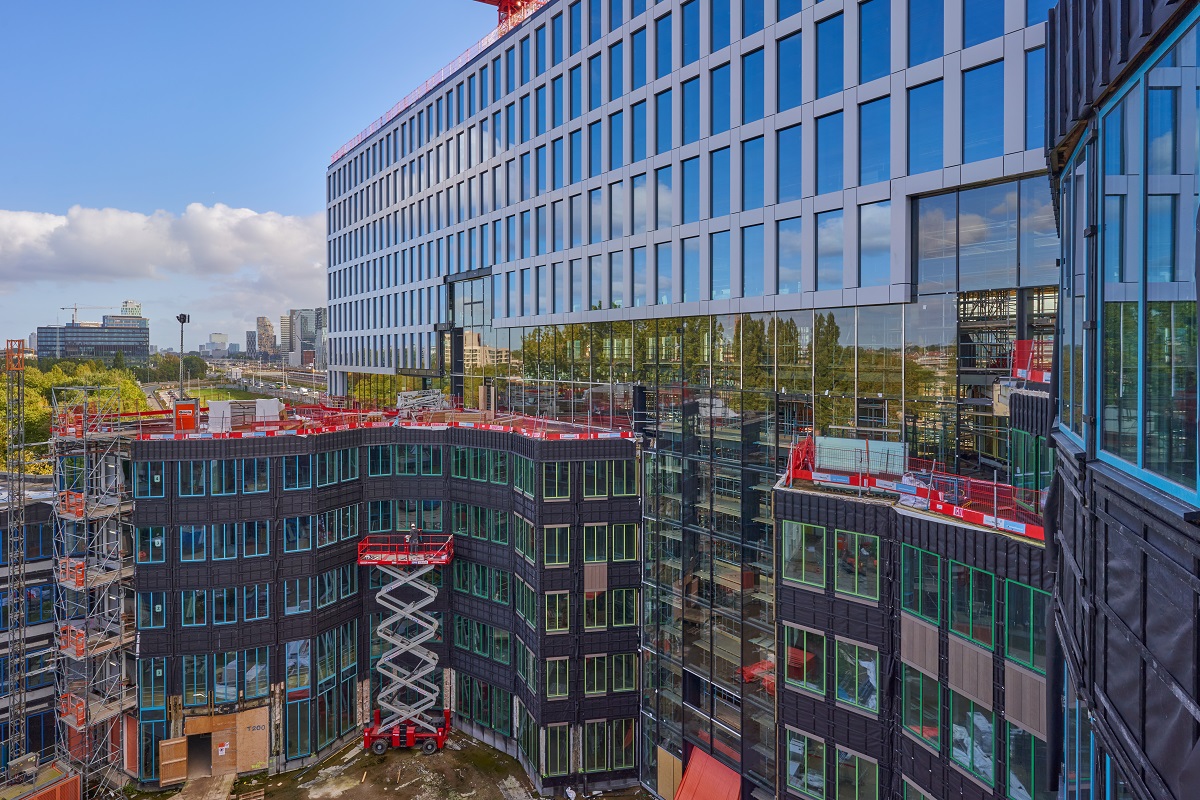 The work inside continues 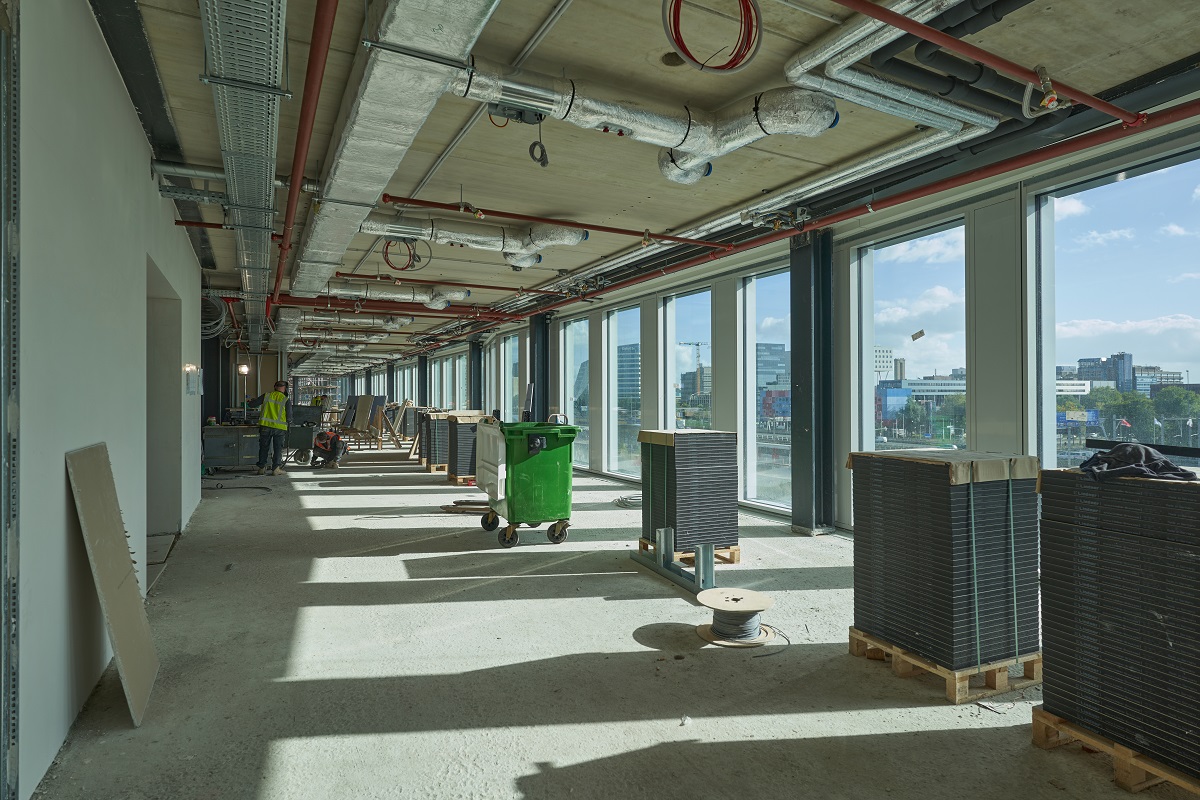 Currently still a puddle of water, soon a living roof 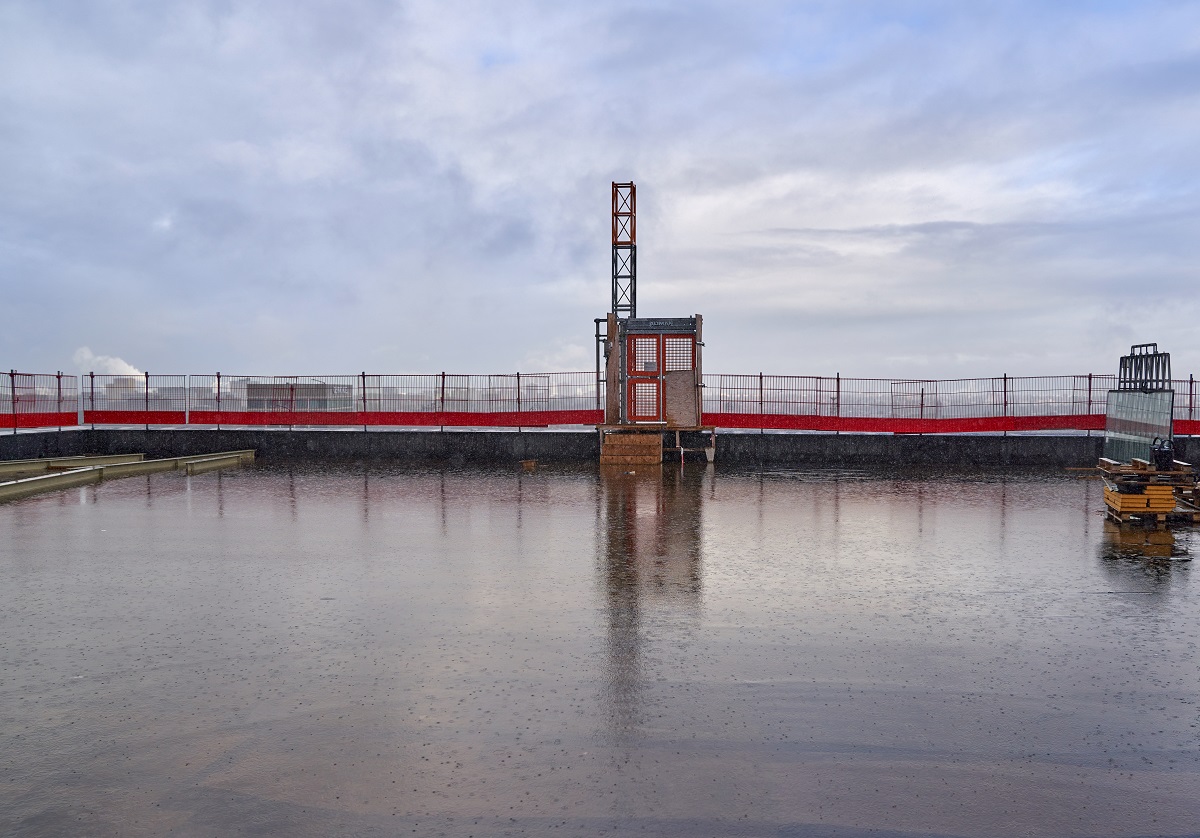 Rectangular on the outside, playful inside

The atrium is currently still full of scaffolding. ‘Setting up that scaffolding proved quite a challenge’, says Hilders. ‘The existing complex is anything but straight, with staggered floors and corners everywhere. This will soon be a light and airy room, connected here and there by stairways. Quite playful actually. Although the building looks rectangular from the outside, it’s set to be very interesting inside.’ This is exactly what architect Aldo van Eyck envisaged with his design for Tripolis in the 1990s: office floors full of open spaces with the focus on enabling people to meet. That vision was not particularly popular at the time, but has now been embraced by businesses. Developer FLOW Development is breathing new life into the vision. ‘Van Eyck was obviously ahead of his time’, laughs Hilders. 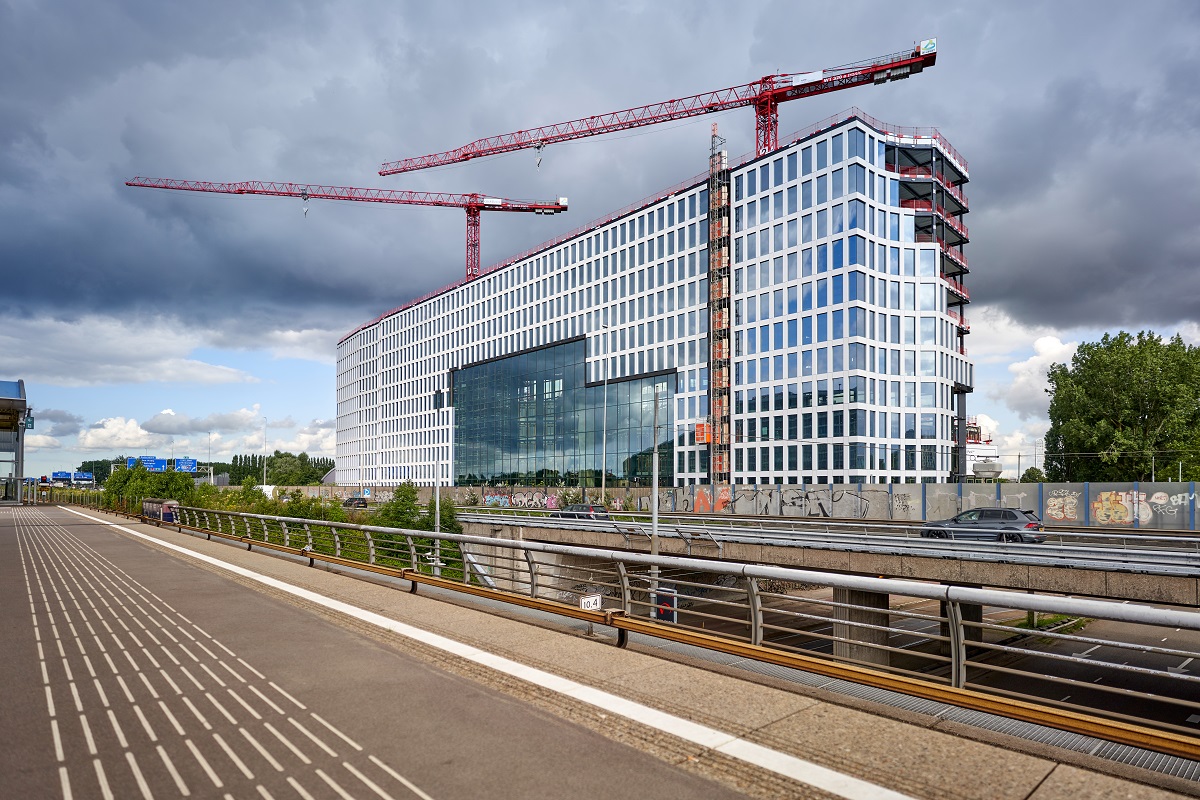 Van Eyck’s design philosophy is still being respected and the inside of the monumental Tripolis is gradually transforming into an ultramodern office building. During the tour, Pitstra, who was involved in the construction as a BREEAM expert, points out various details that are intended to make the building as sustainable as possible. ‘Look at the packs here of pulp from recycled newspapers and other paper. That will soon be used as sound insulation material between the floors. Tripolis Park is aiming to achieve the highest possible sustainability rating: five-star BREEAM certification, also referred to as ‘outstanding’. Pitstra: ‘This is a challenge, because part of what we’re dealing with is an existing building. One advantage is that we’ve stripped down the existing towers almost completely. All that remains is the concrete and we’ll obviously be reusing that.’ In a later stage, the office areas will be fitted out with completely controllable climate ceilings, operated via a smartphone app. ‘Instead of setting the temperature and light for the whole floor or even the whole building, an employee can do that for his or her own workspace. That saves a considerable amount of energy’, says Hilders. Pitstra: ‘What you’re actually doing is creating climate islands, each measuring four square metres, in which the temperature and light can be controlled. That enables us to meet one of the BREEAM requirements.’

Building with a view across the Olympic Stadium
Marcel Steinbach 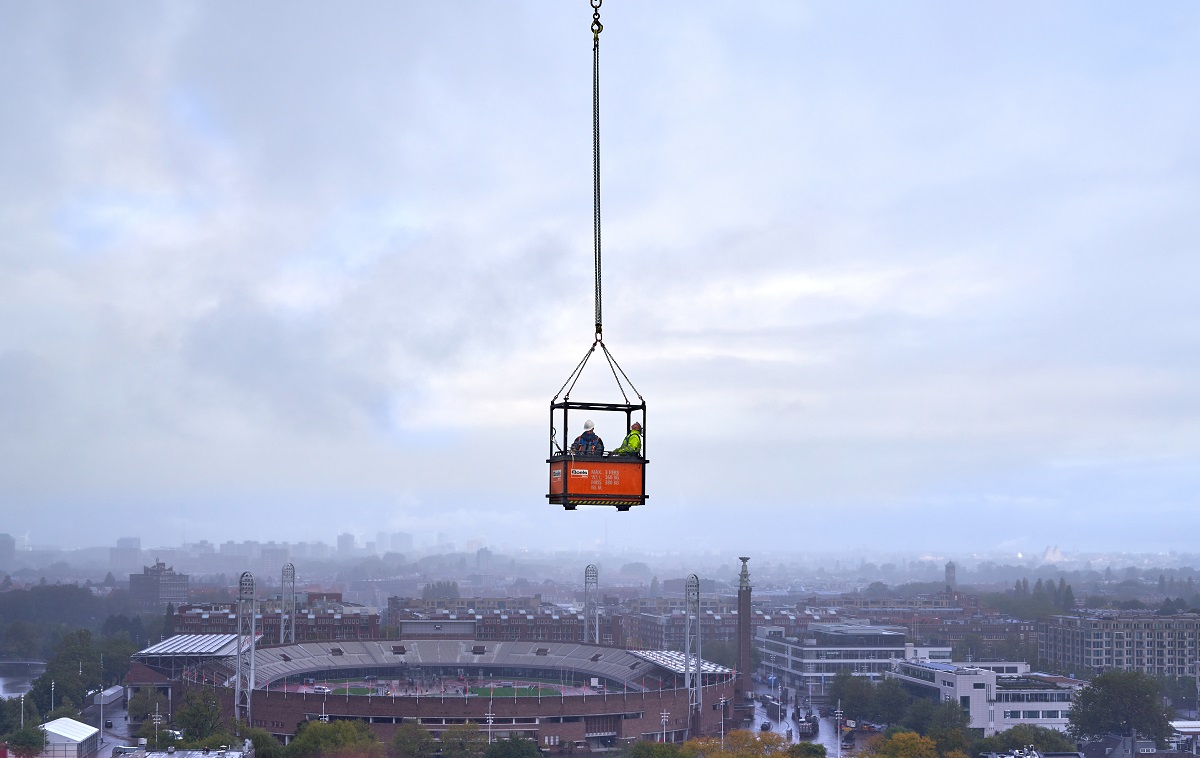 One of the lift systems is already working, but in order to access the roof of the eleven-storey landscraper, we have to use an old-fashioned builder’s ladder for the final section. The grey sky and drizzle do nothing to spoil the amazing view. Toward the city you can see the Olympic Stadium and, on the other side of the A10, the impressive towers of Zuidas fill the horizon. The roof of the landscraper already has the first waterproof layer added to it, explains Hilders. Much of this will later have sedum placed on it, which retains rainwater temporarily. ‘That means, in the event of a big storm or heavy rainfall, the rainwater is stopped from flowing straight into the sewer’, explains Pitstra. ‘We call that a retention roof. Water drains away slowly to prevent the sewers flooding. It could also be reused, for example as water for the toilets.’ Hilders looks on with interest as he listens to his colleague. ‘Even I learn something new every day’, he jokes. He then focuses on the view. ‘If I was lucky enough to work in an office here, I’d definitely opt for the view of Zuidas. Aren’t all those tall buildings just amazing? And this is also the side where the sun rises and sets.’

How will Verdi become greener?

On Tuesday, 28 September, Amsterdam Zuidas organised the Green Walk through Verdi. With around 45 local residents, we took a walk through the area and discussed the Verdi Green Plan ('Groenplan Verdi').
wonen-en
werken-en
November 13, 2021

From start to finish: Valley in images

Valley is now virtually complete. Developer EDGE and the Valley construction consortium have successfully built a multifunctional building that will give Zuidas a new look. Hundreds of construction workers have spent around three and a half years working on it. Below is a visual retrospective.
wonen-en
November 2, 2021

The renovation work on Europaplein-Oost, opposite the RAI, will be starting on 8 November 2021. Before it can be relandscaped, some things will need to be removed. By the summer of 2022, the neighbourhood will have a new green area to enjoy.
More posts