The invisible heart of Zuidas

Less digging, reduced noise nuisance and public spaces of the highest quality. This was the rationale behind the construction, in 2005, of the integrated cable and pipeline tunnel (‘integrale leidingentunnel’ or ILT). This gigantic cable trench, half a kilometre in length, now has a new municipal manager. 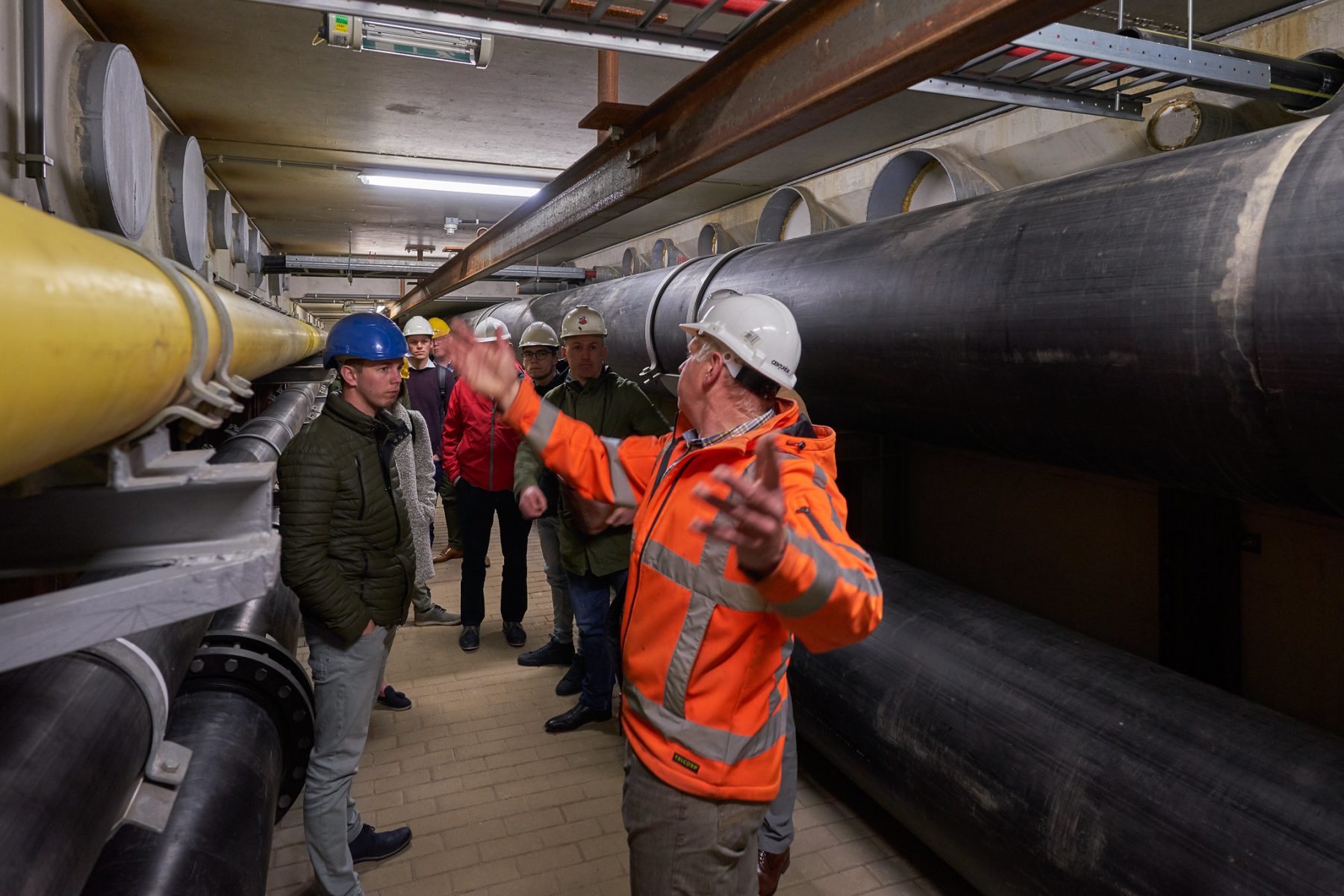 Zuidas Director David van Traa still has strong memories of the day he was able to take a look inside it. ‘I was taken to a traffic bollard in the middle of the street that was opened using a key. Another bollard then rose up, which had a different key and then a trapdoor suddenly appeared. It was as if an underground secret world was being opened. It was just magical.’

The trapdoor to the ILT
Marcel Steinbach 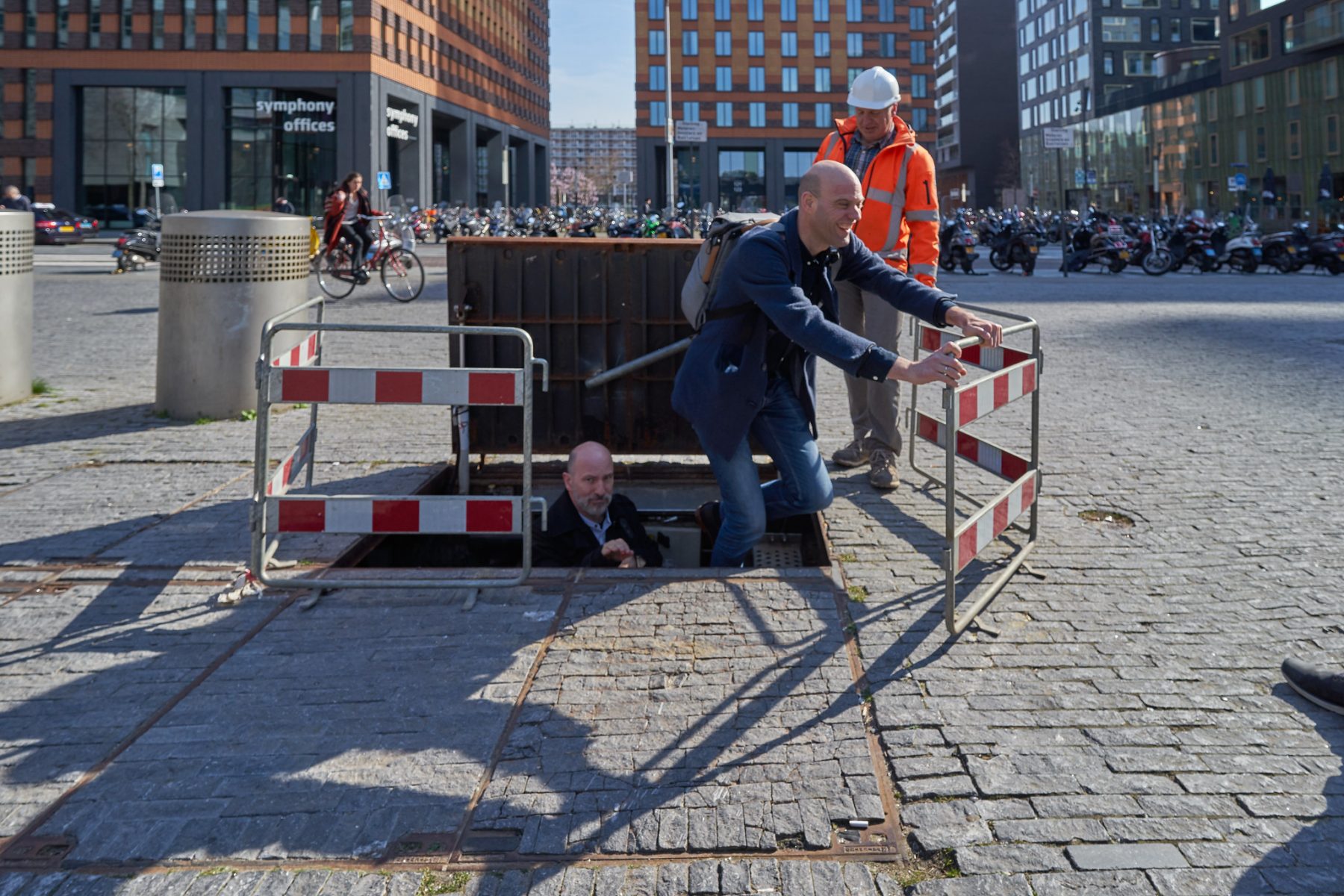 Underneath Gustav Mahlerlaan, in the section between Parnassusweg and Beethovenstraat, lies the ILT: the integrated cable and pipeline tunnel. A staircase leads to 3,250 sq. m. of subterranean Amsterdam. The ILT, almost 500 m in length, contains cables and pipelines that supply 600,000 sq. m. of offices and homes with water, electricity, gas and data. The tunnel became Amsterdam’s pride and joy and the subterranean heart of Zuidas. Almost two years later, this exotic creature has a new manager: The Transport and Public Space department of the City of Amsterdam (Verkeer en Openbare Ruimte, V&OR).

Built in 2005, the tunnel is owned by the City of Amsterdam. Throughout that time, Zuidas was responsible for its management. Since 1 January 2022, this ‘vital artery’ has had a new owner: the City asset managers, V&OR, together with the City Works unit will take care of the tunnel’s management and maintenance. 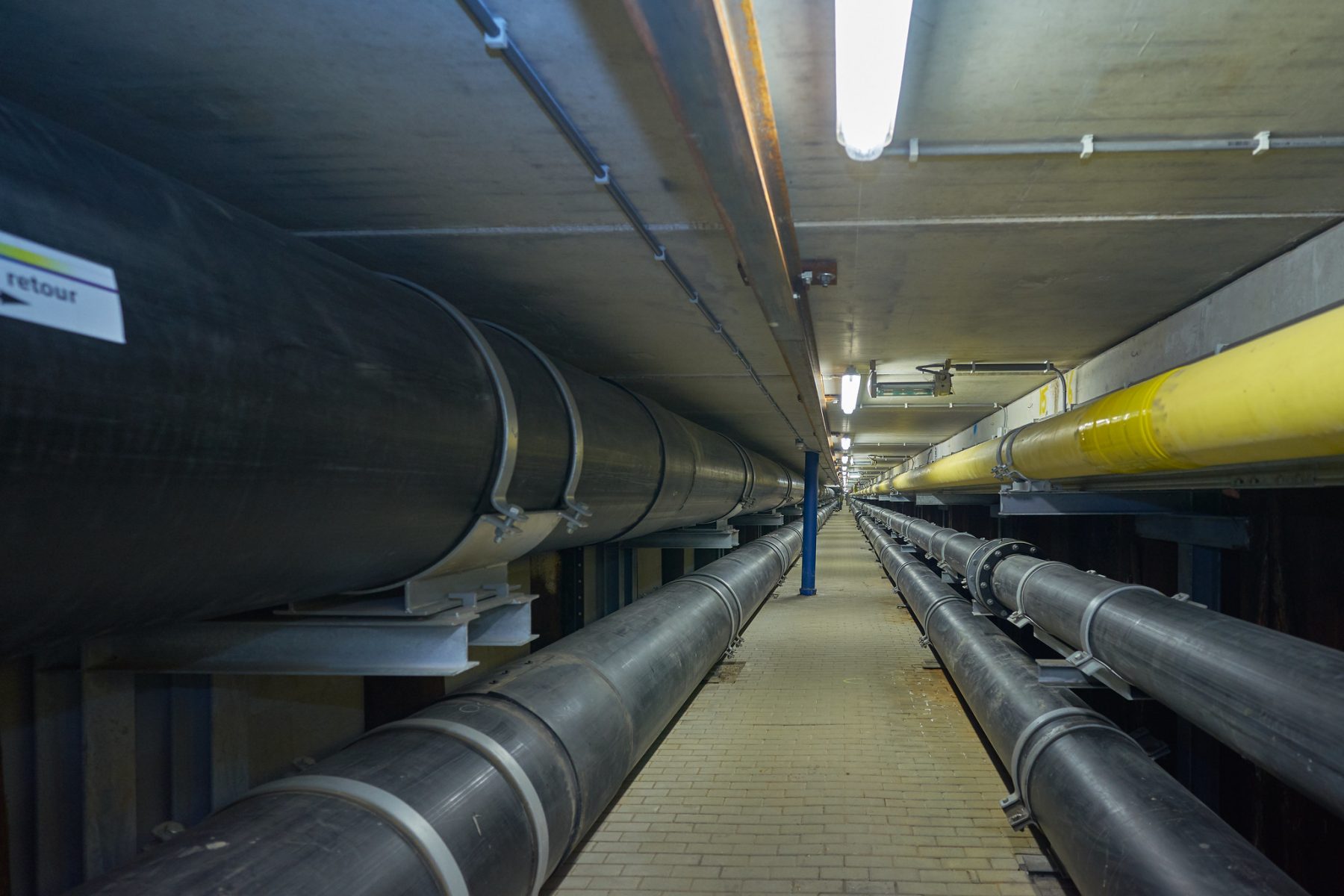 The ILT is part of the Zuidas Energy and Utilities Master Plan (MENZ in Dutch) launched in 1998. Within forty years, the aim was to make Zuidas a prime international office location and an attractive neighbourhood in which to live. Combined with extremely dense construction, this development placed great demands on the area, including for the associated cables and pipelines. For every new office building and apartment block completed, the street needed to be opened up in order to connect water, electricity, gas and data cables. There was soon a realisation that this would undermine the area’s accessibility. It would also result in a wide street profile, with negative repercussions in terms of the quality of public spaces and land values. The City of Amsterdam saw this as unacceptable. The idea was that the ILT would provide the solution.

Preparations for construction began in the first quarter of 2002 and the tunnel was completed in the second quarter of 2005. The cable and pipework tunnel underneath Gustav Mahlerlaan was one of the first ILT structures in the metropolitan Netherlands. It is approximately 3 m in height, 6.5 m wide and 500 m long and consists of two lines of steel piling, a partition wall in the centre and a concrete roof panel on top. The various cables and pipes for the transport and distribution of water, energy and telecommunications are divided across two corridors: a South corridor with hot pipes and a North corridor with cold pipes. For risk management reasons, the gas is separated from the electricity, the drinking water pipe is located beneath the tunnel paving and the telecom cables are divided across two corridors. The tunnel initially attracted a lot of attention: with everyone from ministries, journalists, scientists and others wanting to take a look at this amazing ‘underground’ world. 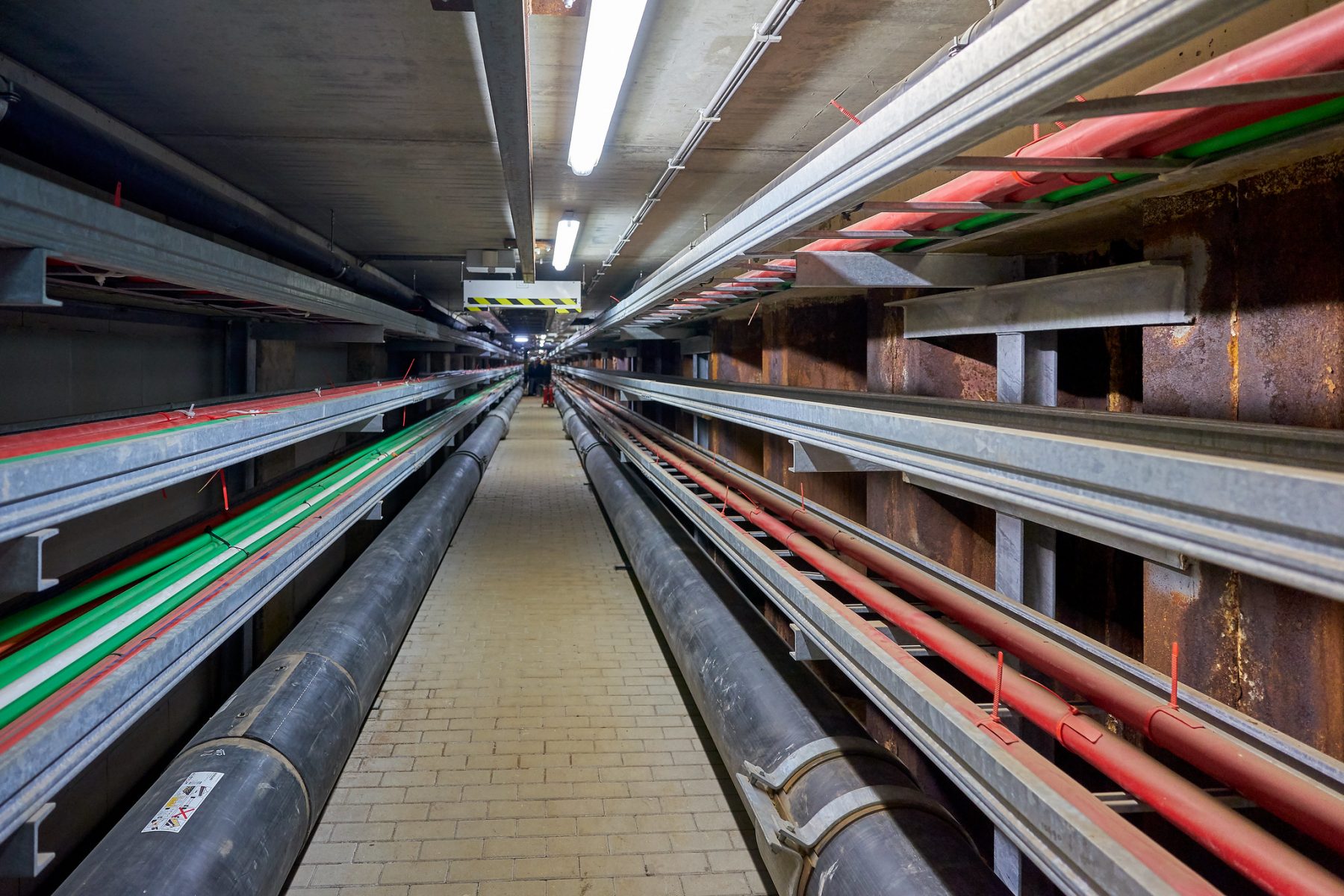 Some 16 years later, it was time to assess it success. Was the ILT doing the job it was intended to do? What about the finances? The City of Amsterdam carried out an analysis. It had a positive conclusion. Thanks to the ILT, the organisation of public space has been made more attractive. Trees have been planted on Gustav Mahlerlaan and are thriving. Since the street no longer needs to be opened up, land values have increased: the real estate value in this area is 1% higher than in other areas. It has also proved an attractive area for hospitality and retail outlets. In summary, the ILT has lived up to the original expectations, making it a model project that provides inspiration to municipalities and utility companies.

The cost-benefit analysis also proved positive. The construction of the ILT cost between 10 and 12 million euros (2021 price level: 15.4 million). That represents an increase in real estate values totalling 78 million euros. Frans Taselaar, energy and utilities consultant in Zuidas and responsible for the Masterplan at that time, is satisfied. ‘It was the right plan at the right time and we can look back at it with satisfaction.’ Jorrit Meijer, project manager responsible for Realisation, is also happy. ‘We’re now more than two decades on. The Gershwin neighbourhood is virtually complete and the Ravel neighbourhood is also soon to follow. Yet the ILT is still unique to this day. It serves as a source of inspiration for tunnels that still need to be built.’

But the question of whether a similar ILT will be built elsewhere in the city remains open. ‘The decision-making process itself, the way in which the pipes and cables are bundled and the management all need to be carefully scrutinised’, says Eric van den Beuken, who coordinates the City Management underground team at V&OR. ‘I’m certain that, in the future, V&OR will set more exacting demands in terms of what any new tunnel should look like. The structure really can be much more secure and tidier.’ Despite this, V&OR, which is also responsible for managing five car tunnels in Amsterdam, relishes the prospect of caring for the newcomer. ‘The job of managing the ILT will be a challenge. It’s a useful product for the city, so we will do our very best’, says Jeroen Schrijver, the new tunnel manager at V&OR. Director Zuidas David van Traa has every confidence. ‘Our exotic creature has found a new home. The circle is complete.’

While we were closed because of coronavirus, model builder Adam Doyce Transue was able to work to his heart’s content updating the model in the Amsterdam Zuidas Information Centre. Why not take a look? You can also drop by in person. Because, the good news is that we have reopened again.
December 31, 2021

Another year of restrictions, but the work never stopped

More homes, more local services, more beautiful public spaces and major progress on the new transit hub... The work at Zuidas never stopped for a moment! And all this despite a second year of working from home. With our thanks to all the people who worked on all those construction sites, here’s a look back on all the progress we made in 2021.
August 2, 2021

Anyone looking east beyond Gustav Mahlerlaan will see a trench, 10 m wide and 5 m deep, running alongside Valley. It is a new link in the planned loop system around Zuidas. ‘We’ll be creating some lasagne here.’
More posts