The stunning new courthouse building is home to an extensive art collection that is also accessible to the public. It serves a very special purpose. ‘The art has a comforting effect in a place where very serious things happen.’ 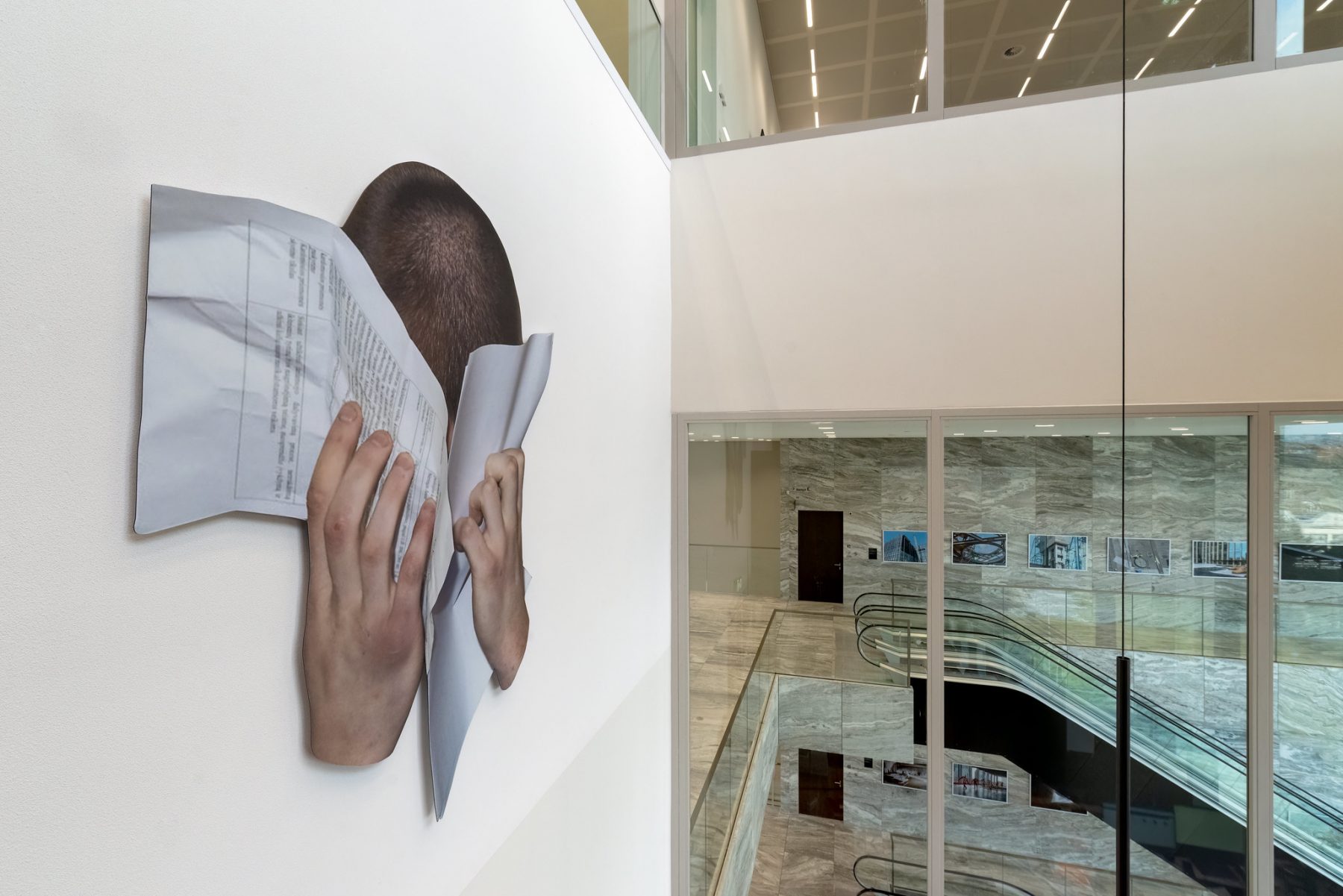 An arm seems to be growing out of one of the walls in the main court room. It is made from Carrara marble, a special type from northern Italy. Directly opposite, on the other wall, we can see some kind of pastel-coloured circles. ‘The refuge’, is what the judge Tjepco van Voorst Vader calls the art in the court rooms, where he so often sits. He is part of the committee that selects and acquires the art for the new courthouse. It’s not difficult to understand why he uses the metaphor of a hiding place. ‘The sessions in the court can be heavy-going. Both for people in the court and for the judges, it’s important to have something to distract. Something that calms us, provides a fresh view or a new perspective.’

Not behind but alongside the judges

In the old courthouse, the artworks were often behind the judges, preventing them from ever viewing them during court sessions. ‘That was a shame’, says Van Voorst Vader. ‘The staff felt it was a good idea to move the art to the sides, where it can be seen by everyone.’ And that’s what happened. The work in seven court rooms in the new courthouse – where the major criminal court cases happen – is by artist Femmy Otten. The sculptures are wide-ranging: in addition to the arm, you can also see a flying carpet in one of the court rooms or a face protruding from the wall. In order to come up with her designs, Otten sat in on numerous cases. Van Voorst Vader: ‘That led her to the conclusion that she wanted her art to provide comfort.’

Comforting art in the court rooms 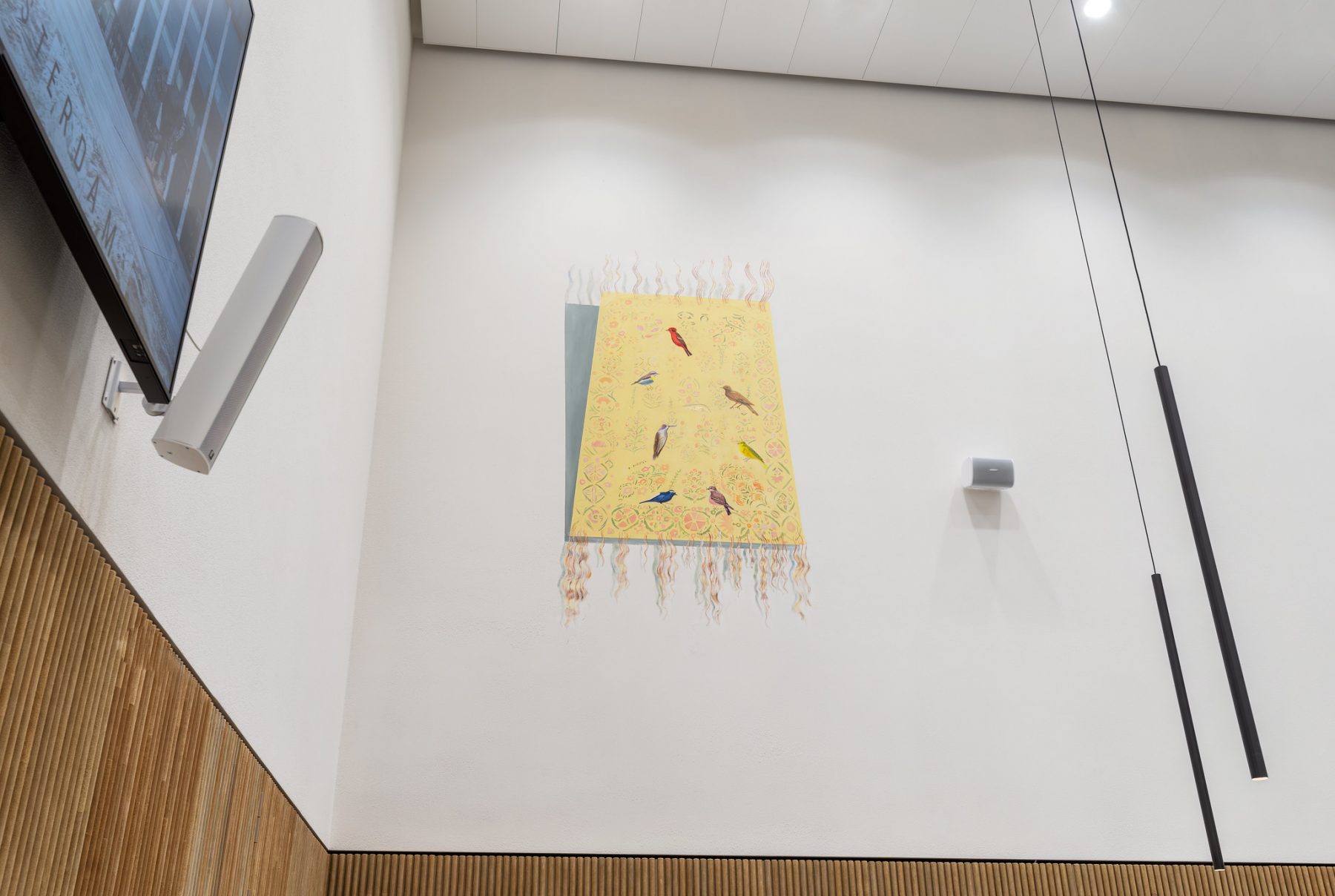 Gender-fluid figure at the entrance

Comfort, distraction, consolation, offering an alternative perspective – the art in the new courthouse serves all of these purposes. Not only for staff, but also for the numerous visitors who enter and leave the building every day, almost never for happy reasons. That’s also the purpose of the 5 m high artwork ‘Love or Generosity’ by Nicole Eisenman, in front of the building’s entrance. This now famous sculpture of a soft, gender-fluid figure marks a stark contrast with the austere courthouse behind it. ‘We wanted to relieve some of the stress that people feel when they come to court’, says Van Voorst Vader. ‘That’s why the whole art committee soon realised that it needed to be a figurative sculpture. Art consultant Esther Vonk was involved in the acquisition. We had to choose from around 60 artists, but we were immediately drawn to Eisenman’s work. Everyone knew as soon as they saw the draft design: this is the one.’ 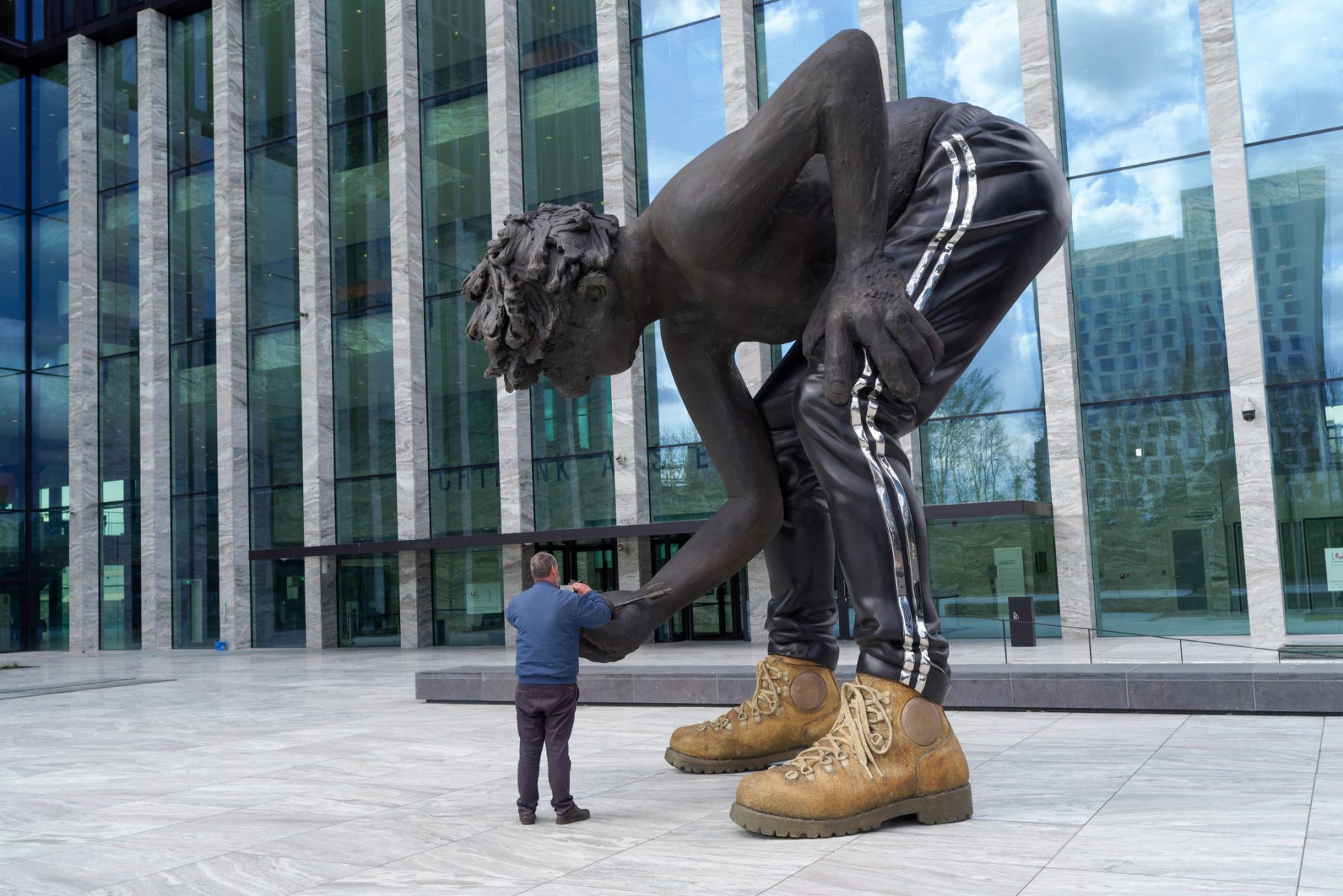 Even inside, the healing effect of art is tangible. Designed by KAAN Architecten, the courthouse – awarded the prize for best building earlier this year – is undeniably beautiful, but there is also something remote and detached about its snow-white walls and magnificent natural stone. The various sculptures, brightly-coloured paintings and installations add a human touch to the building. Perhaps they even give it a soul. For example, as you enter the central atrium, just after the security gates, you encounter a work by the artist Henk Visch. Four legs and feet, with the upper part draped in cloths. It soon became clear that everyone interprets it in their own way. ‘We call that one the walking convicts’, laughs Van Voorst Vader. ‘It could be our profession that makes us see it like that.’ A third person who is joining the tour says it reminds her of the African Masai warriors. One thing is certain: the artwork interrupts the space and, with it, one’s stream of thoughts, if only for a second. 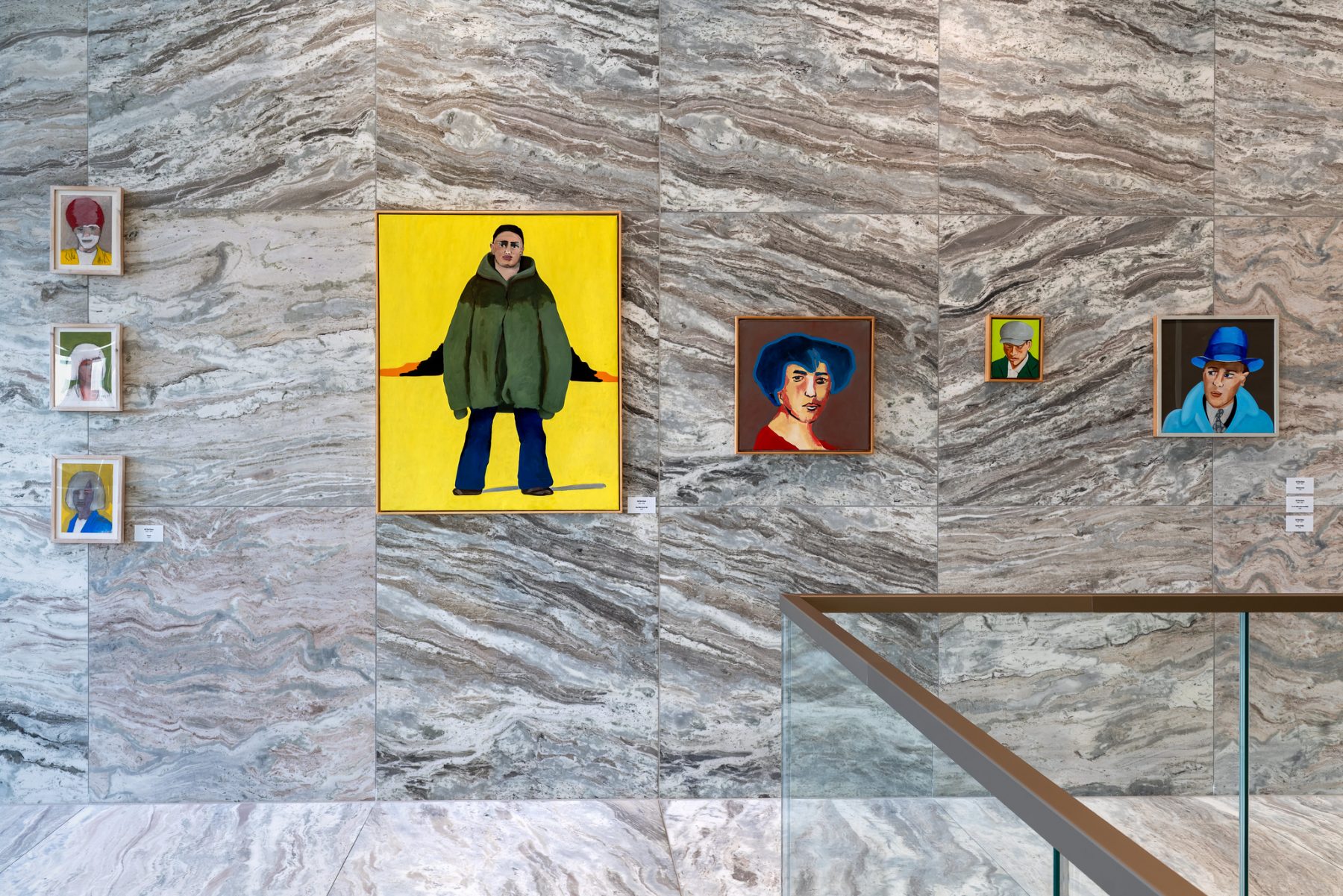 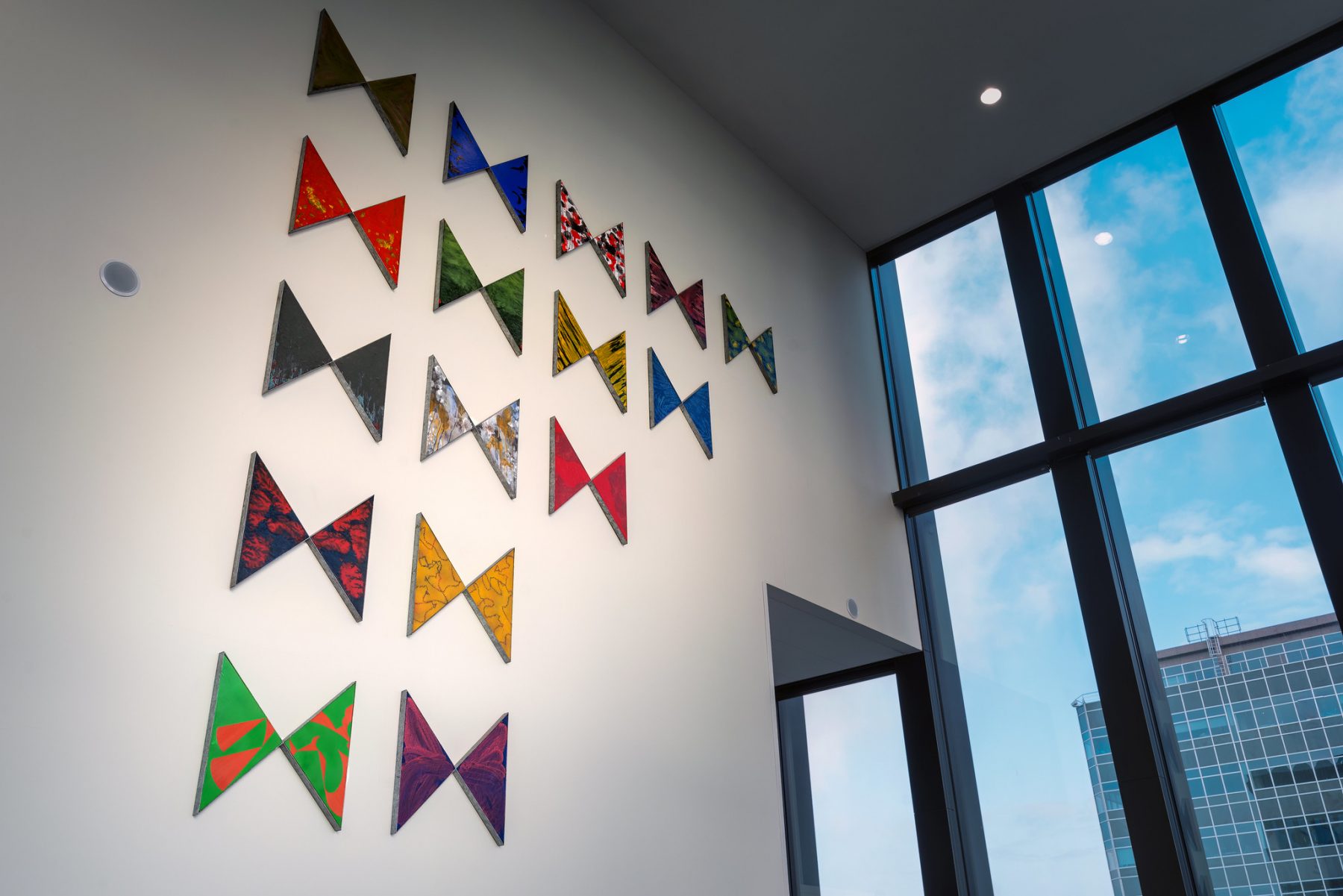 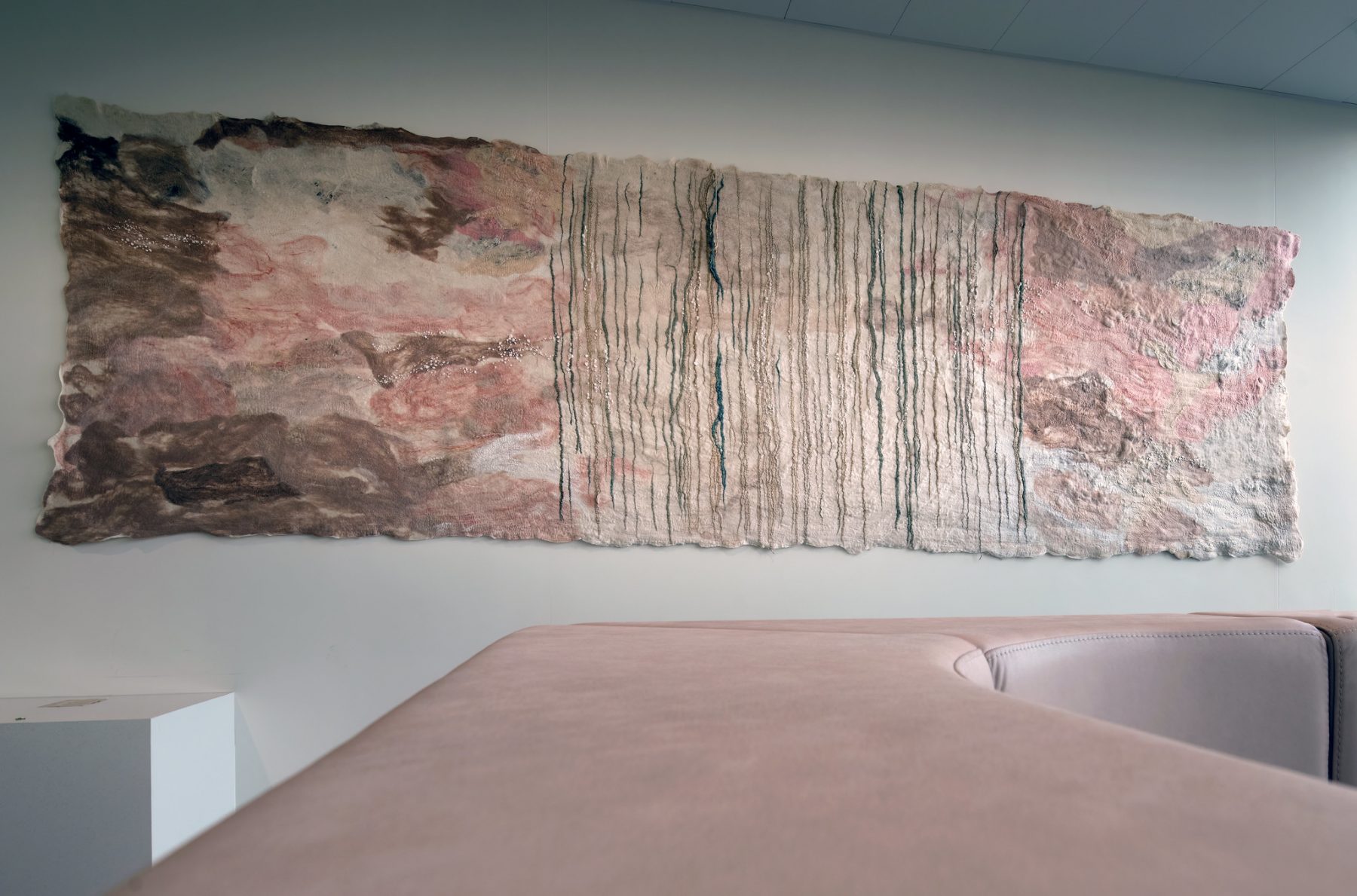 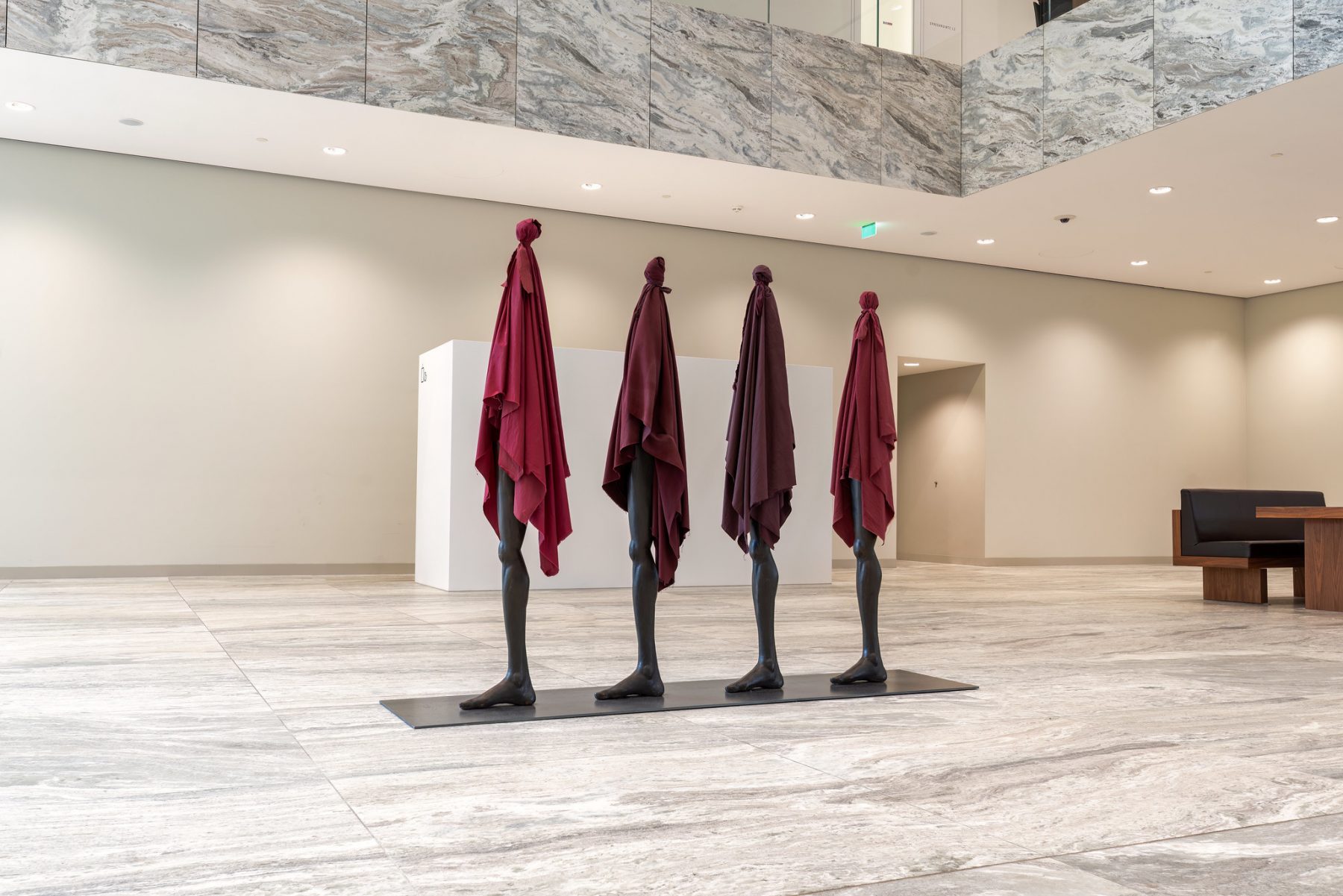 Selecting art for a building like a court room is no easy task. The art is not allowed to be offensive or critical of society. That presented a challenge for the art committee, that has been collecting works since the 1960s. ‘We mainly tend to look for young and up-and-coming artists’, says Van Voorst Vader. ‘For example, we go out in search of national fine art graduates. We also like offering a platform to local artists. But our main focus is on what we find attractive.’ Has any artwork ever had an unintended effect? ‘Of course, that does happen. It’s difficult to predict, because art can evoke totally unexpected associations. We’ve had to have one work removed for that reason. Our aim is to be able to appeal to everyone openly.’ 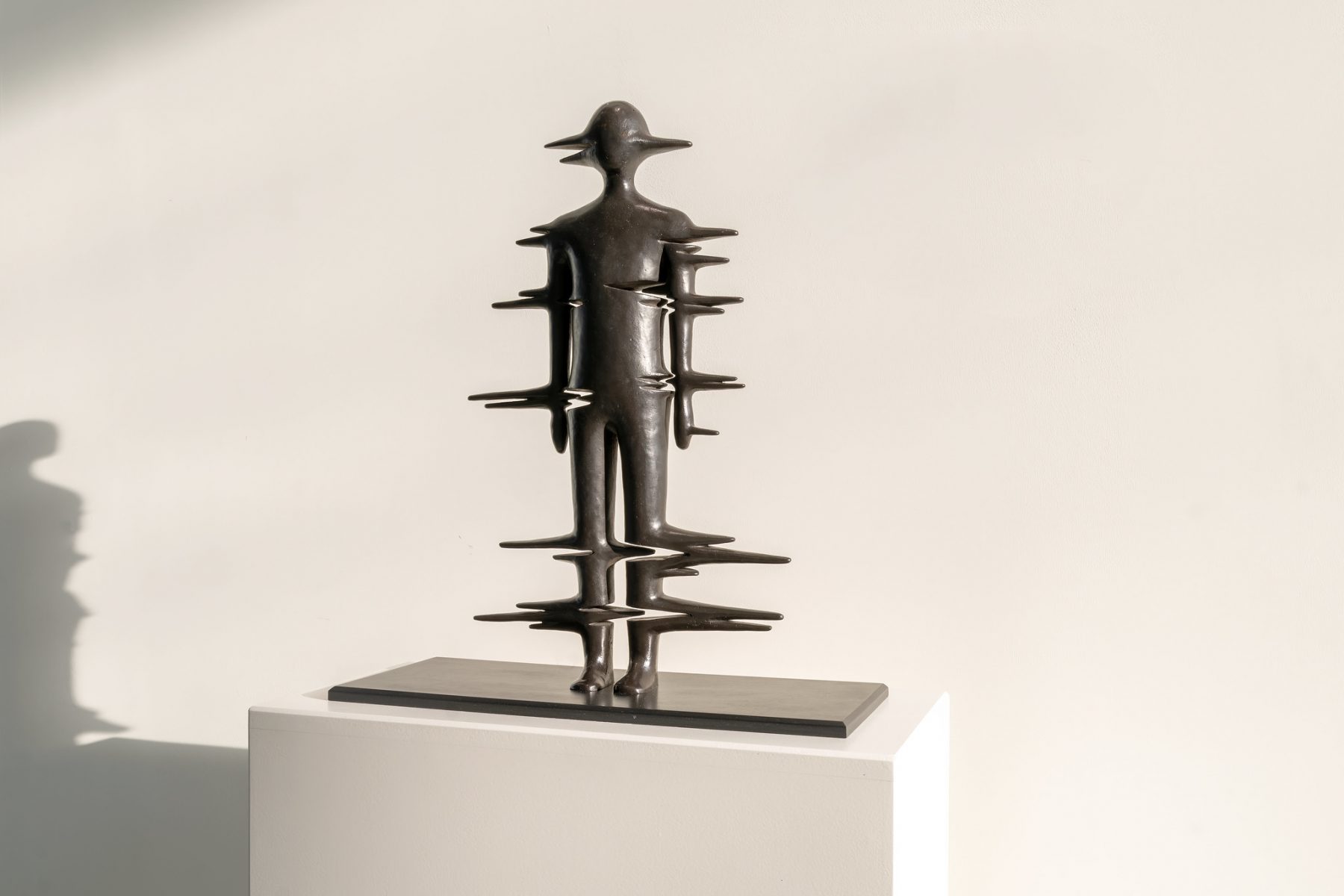 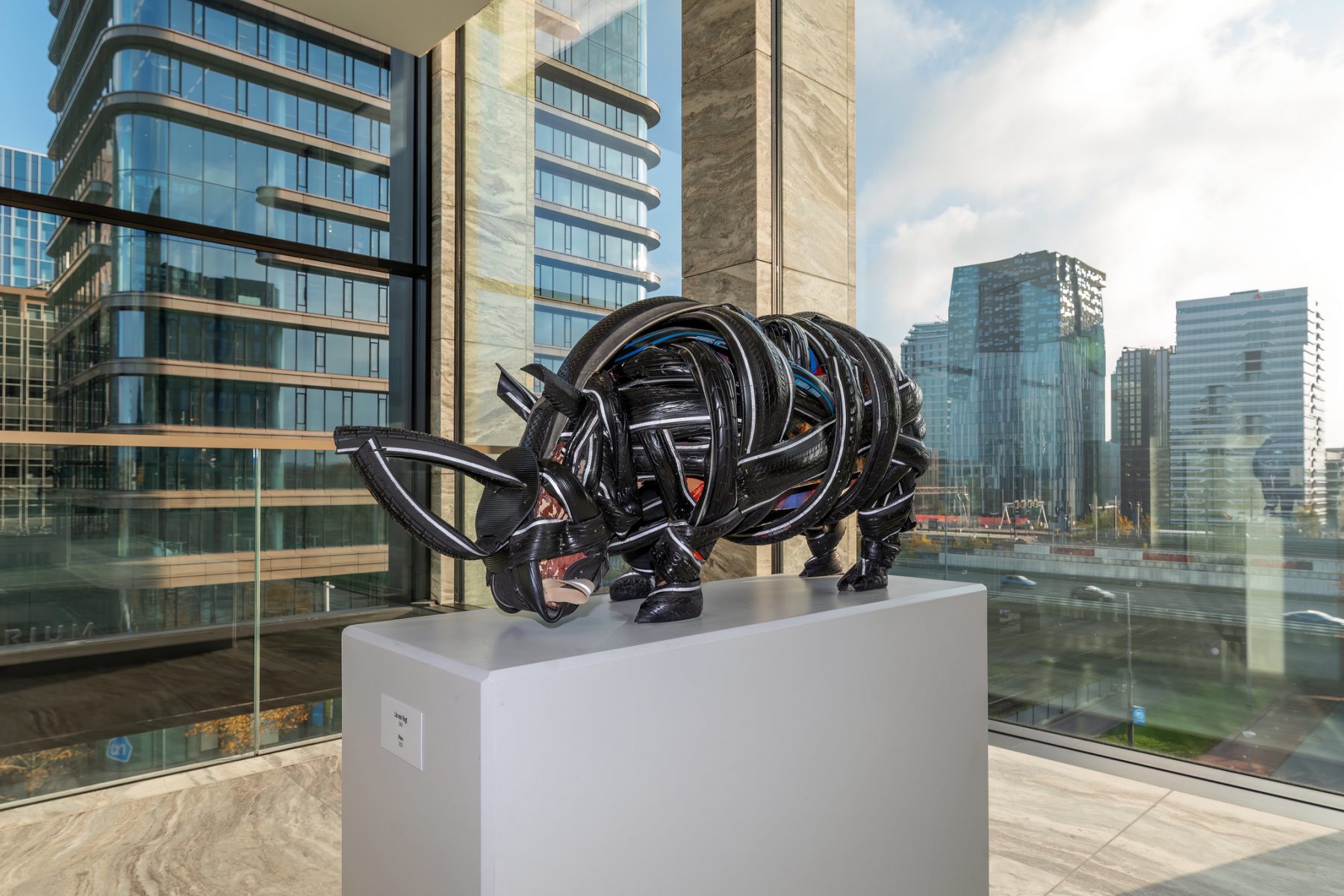 We take the escalator to the second and third floors, where two walls have been devoted to changing, temporary exhibitions. There is currently a photo exhibition by Dominique Panhuysen, who spent four years chronicling the demolition of the old courthouse and construction of the new one. ‘We even bought seven of the 18 photographs for our own collection’, explains Van Voorst Vader. ‘They’re not only attractive, but also have historic value.’ One of the pictures shows a construction worker, with two strips of reinforcement steel resting on his shoulder. Another shows how a demolition hammer has completely wiped out part of a tower, leaving only the lift shaft behind. But is it actually a lift shaft? Van Voorst Vader bends forward to look at the detail. ‘Well, it’s actually the toilets. Look, the roll’s still hanging there. As you can see, even I’m constantly being surprised.’ 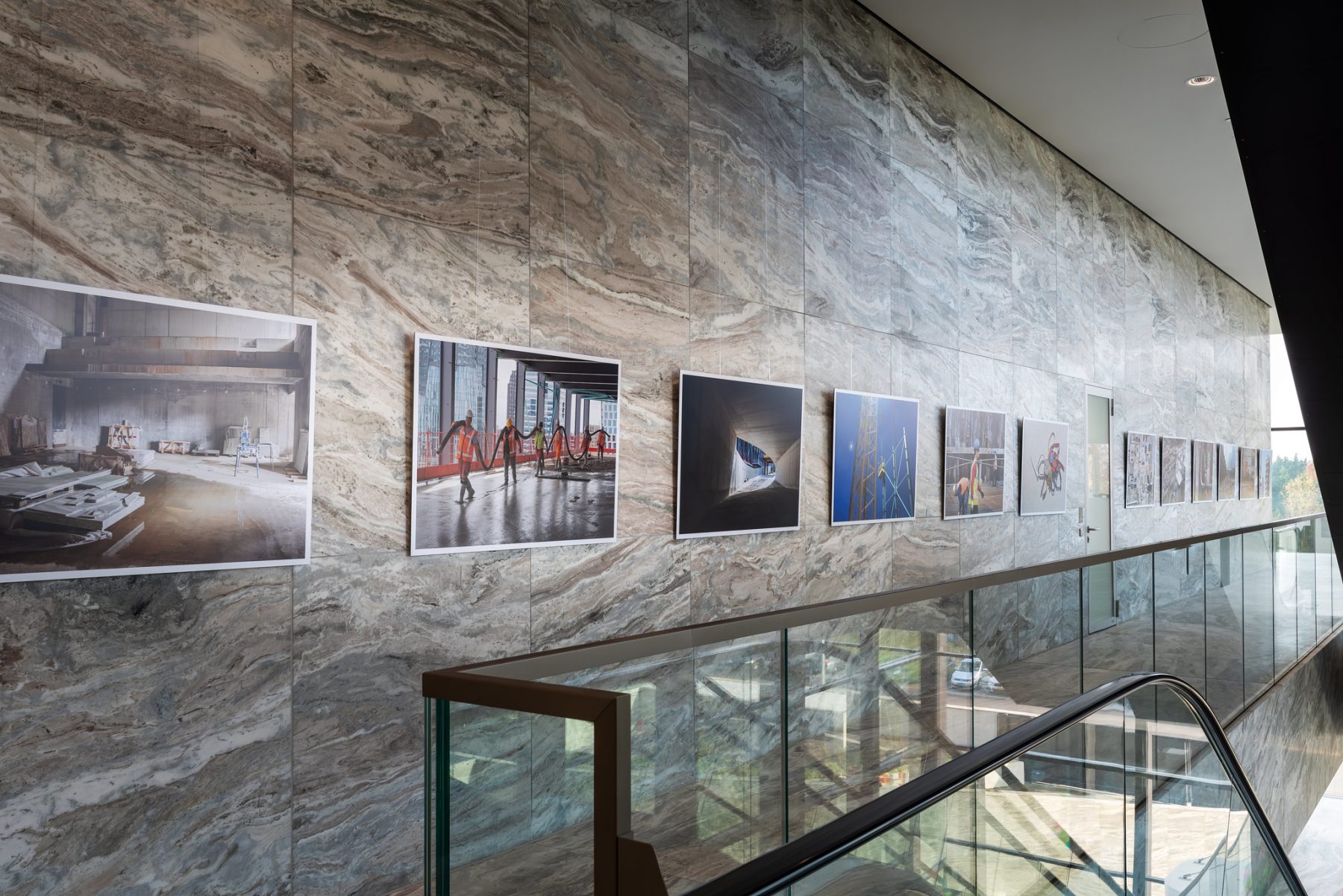 Above all else, 2022 was the year when funding for the Zuidasdok project was finalized. But of course, it was also a year when we just kept on building. Many new homes were completed and work continued on the major upgrade at Amsterdam Zuid station. Preparations also began on the renovation of the motorway interchange at De Nieuwe Meer.
November 18, 2022

Thursday, 17 November saw the official opening of the newly relandscaped Europaplein-Oost. It creates a real meeting place for the neighbourhood, in a green and leafy setting that features a new play area. In the evenings, it will be brought to life by the Virtual Fountains light artwork.
November 10, 2022

The relandscaping of Europaplein-Oost has now been completed. The project has had its fair share of setbacks: firstly, in reaching agreement with local residents and then dealing with issues involving the design and construction/landscaping. But the result is worth the wait. Be sure not to miss the official opening on Thursday, 17 November 2022.
More posts