From resident wishes to sketches for street design

What to do with the public space in three side-streets of the George Gershwinlaan? The residents have been talking about this via an app since April 2018. On 22 September 2018 they gathered in the street and met with the Zuidas designers.

As it was national neighbours’ day, it was the perfect occasion to get to know each other. Some 50 residents of the streets between the Gustav Mahlerlaan and George Gershwinlaan agreed. They live in the direct environs of the Benjamin Brittenstraat, Peter Schatstraat and Leonard Bernsteinstraat. They had already exchanged views online with another 150 neighbourhood residents, but had not yet met in person.

They had the best of reasons. There is an ongoing discussion about organising the public spaces via an app (the OppApp) since April 2018: what do residents want to see in their streets? Of course there were different opinions, but the dialogue yielded three major wishes: space for greenery, space to meet, and space to play. Our designers Joost and Marja set to work and presented their preliminary sketches to the residents on 22 September – was this what they wanted?

‘After the discussions via the app, it was time to meet up,’ says Maarten van Ettekoven, Zuidas environment manager. ‘To date, the residents only knew each other from the app discussions. And they didn’t know us, so that has changed now.’ The main result of the app dialogue is that residents have a deeper understanding of each other’s opinions, says Van Ettekoven. ‘Originally there was a clear division between advocates and opponents of a playground in one of the streets, for instance. There were people who felt it was absolutely necessary, and those who abhorred the idea. During the meeting, we found that pretty much everyone feels that children should have a playground nearby their homes. So residents have come to understand each other’s positions. And that is great, of course, even if there is no consensus yet on its most suitable location. People are afraid of noise pollution from playing children.’

During the meeting, there was a discussion about the idea of installing a greenhouse in one of the streets. ‘And it was a serious discussion, not between residents and city officials, but between neighbours. You could see the app  has proven itself useful, for it has stimulated dialogue and discussion.. The suggestion of a greenhouse had been submitted earlier – a space for gardening together and meeting up. Already during discussions via the app, it turned out there was demand for a place to meet up, but not for gardening together.’ The designers presented their first sketches during the meeting and via YouTube. 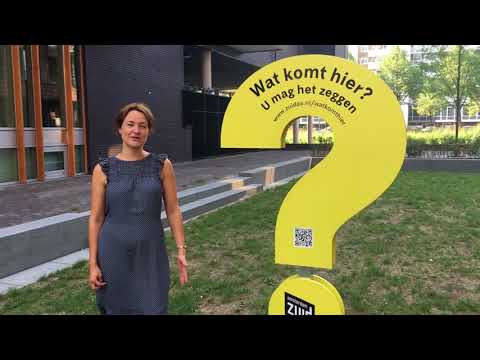 The sketches are based on wishes expressed in the app. Joost and Marja translated these wishes to a street with space for greenery and places to sit down and relax, and a street with playground elements. For the third street, they came up with a thoroughly original interpretation of  ‘meeting up’: they designed a fairly high wooden tower with seats for people to sit on. Van Ettekoven: ‘You could tell the residents didn’t quite understand that last part. I think Joost and Marja tried to combine their vision as landscape architects with the residents’ wishes. In their eyes, a beautiful sightline will emerge when the extra corridor where Zuidasdok is building will run beneath the railway. This corridor, the Brittenpassage, will be an important connection between the north and south sides of Zuidas and a beautiful entrance to the Benjamin Brittenstraat. They feel it justifies the element of height. Whether this idea will continue is the question. Some residents liked it, others felt it was not right for the neighbourhood.’

What is next? ‘The main concern at this point is the location of the playground,’ says Van Ettekoven. ‘We will ask the residents what they prefer: for the city to decide, a vote, or a lottery.’ That questionnaire and the design of the containers must be done quickly for practical reasons: the best time for planting greenery is November through March. The managers of the public spaces must also assess whether the wishes can be maintained. The public spaces will not be maintained by Zuidas, but by the municipal department of Traffic and Public space. Once they approve, there must be a contractor who will furnish the spaces. And they all have a personnel shortage. ‘But we are hopeful,’ says Van Ettekoven. ‘And the best part is that something will emerge that shows we have leveraged our expertise to realise what residents want.’

In the words of AFC chairman Ad Westerhof, “This is beyond my wildest dreams”

The ‘Goed Genoeg’ sports park, the home of AFC, is to get new pitches and a new clubhouse. AFC chairman, Ad Westerhof, is happy that work has started because the preparation process was long and caused much debate.

What are the plans for the area around the university and the medical centre? And what about the construction on the Zuidasdok project? What will be happening in the near future? We held two information sessions on 9 July 2018 to answer these questions and more.