‘Zuidas widow’ transformed into an oasis of tranquillity

The brief: to create a building that felt like a ‘home’, rather than an office, and that everyone at the Dutch Charity Lotteries organisation would be able to enjoy. No easy task. But architect Saartje van der Made rose to the challenge. The result: a metamorphosis in Prinses Irenestraat. 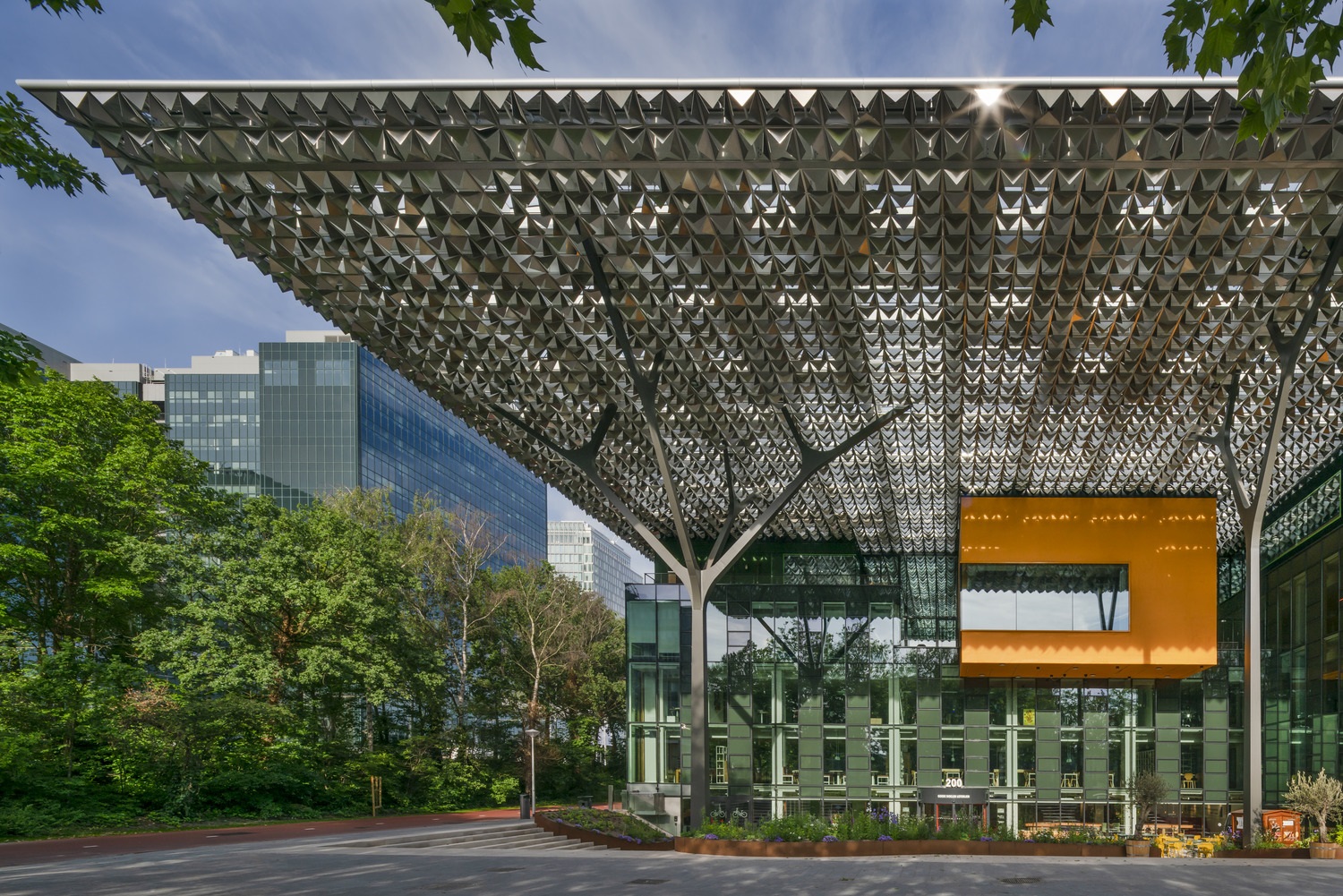 It was 2014 when the Dutch Charity Lotteries first began their search for an architect to design a building for their 600 employees to work in. For years, the company had worked from various offices in Amsterdam, Houten and Eemnes. Their wish for a new shared head office culminated in the purchase of the building that was once known as the ‘Widow of Zuidas’ – a vacant, lonely and rather forlorn-looking building on Beethovenstraat. But the company saw the building’s potential, and renovating an existing building was also consistent with its vision of realising their new office as sustainably as possible.

The first step in the process was for the project to be ‘pitched’, as is customary in the world of architects. Van der Made, partner at Benthem Crouwel Architects, recalls: ‘This design challenge felt unusual and rather special right from the start. Creating an office that “feels like a home” is not your standard brief.’ And the approach taken by founder and CEO of the Charity Lotteries, Boudewijn Poelmann, was also a little different. ‘He asked every employee for their input, regardless of the technical parameters that had been set, and drew up a wish list. And sure enough, that wish list became just as important as the technical parameters. That inspired the whole agency to pull together. We organised a day for everyone in the organisation – from trainee to partner to receptionist – to contribute their ideas. And the result was the design that we presented to the Charity Lotteries.’ 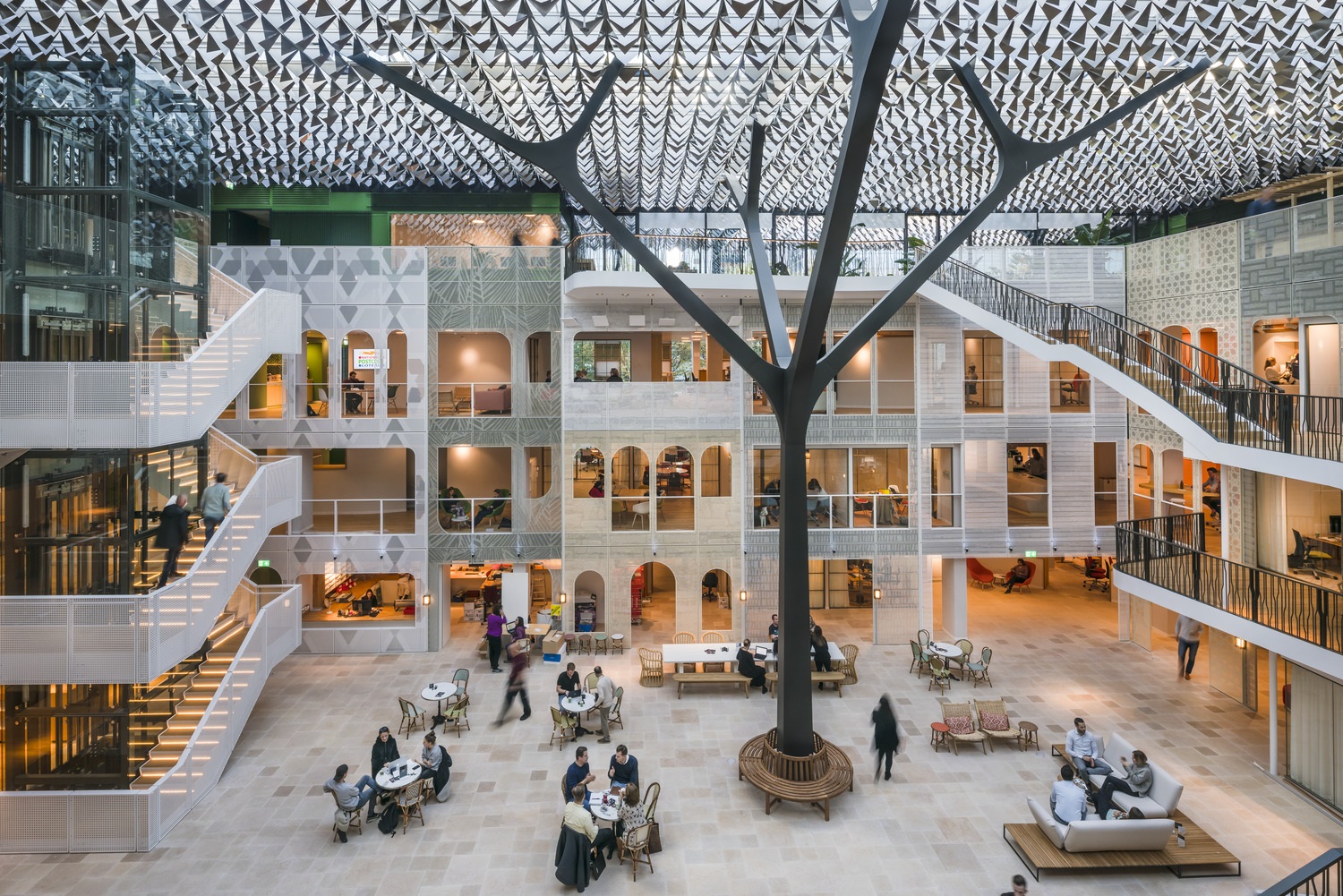 In addition to a building that felt like a home, there were other strict criteria that had to be met in the design. For example, the building needed to be renovated as sustainably as possible, so that it would meet the requirements of a BREEAM ‘Outstanding’ certificate, the highest possible rating that can be achieved in sustainable construction. ‘That meant solar panels on the roof and a heat-cold storage system under the ground,’ explains van der Made. ‘A water regulation system using rain water for plants and toilet also needed to be installed. In addition, a parking facility had to be created under the existing building, without undermining the existing structure. And then the building would also need to be expanded, both between and on top of the existing structure.’

Managers and employees of the Charity Lotteries were particularly impressed by the way in which Benthem Crouwel Architects approached the project. ‘The fact that we encouraged all our employees to come up with something beautiful, just as they had done – they were particularly inspired by that,’ explains van der Made. ‘The great thing about this project, but also the trickiest aspect, was that the people at the Charity Lotteries were involved closely and constantly, throughout the whole design process.’

An oasis of tranquillity - the Charity Lotteries building
Jannes Linders 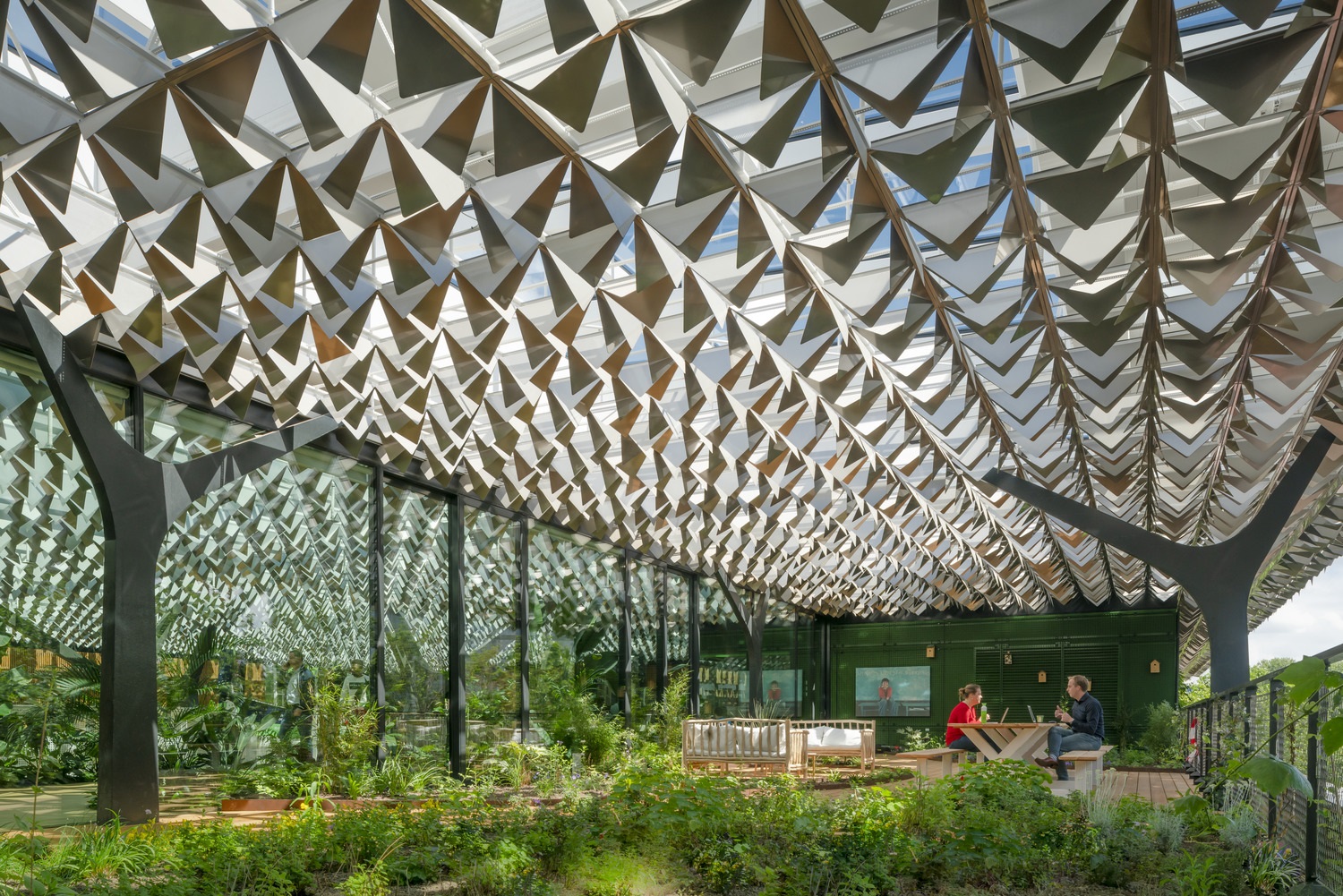 The heart of the building

That involvement really came into its own when it came to the design of the atrium. ‘The existing building was square, and in the middle there was a courtyard with parking,’ says van der Made. ‘According to our designs, this courtyard would be covered over, creating a covered space where the car park had been.’ This would become – both literally and figuratively – the heart of the building. ‘I learned from Boudewijn Poelmann that often the atrium of a building is a space where people don’t actually enjoy sitting and spending time. He wanted to avoid that in the new building, and create an atrium that felt more like an Italian piazza, with plenty of light and space. The precise details could be worked out later. So we had the idea of involving the employees in the design process by asking them to help design the façades around the central atrium.’ At this point, interior architect Edward van der Poll from D/DOCK had also come on board, and he was responsible for designing the imposing staircase that leads upwards from the atrium. ‘We listened to the employees, so this space really became theirs.’

The ambition to incorporate green space into the design found expression in a specially designed roof that features a roof garden with real green areas underneath. ‘The roof of the building has become a real highlight,’ says van der Made. ‘It consists of an enormous wooden platform that not only covers the entire building, but also extends over the forecourt, forming a wonderful space where people can enjoy being outdoors all year round.’ Skylights were installed in the wooden section where more daylight was needed inside, with solar panels in between. An extra layer of aluminium panels was added under the roof to reflect the planting below and create a playful pattern of shade and sunlight. The panels also prevent the building from warming up too much in the summertime.

On the right: Saartje van der Made
Martine Berendsen 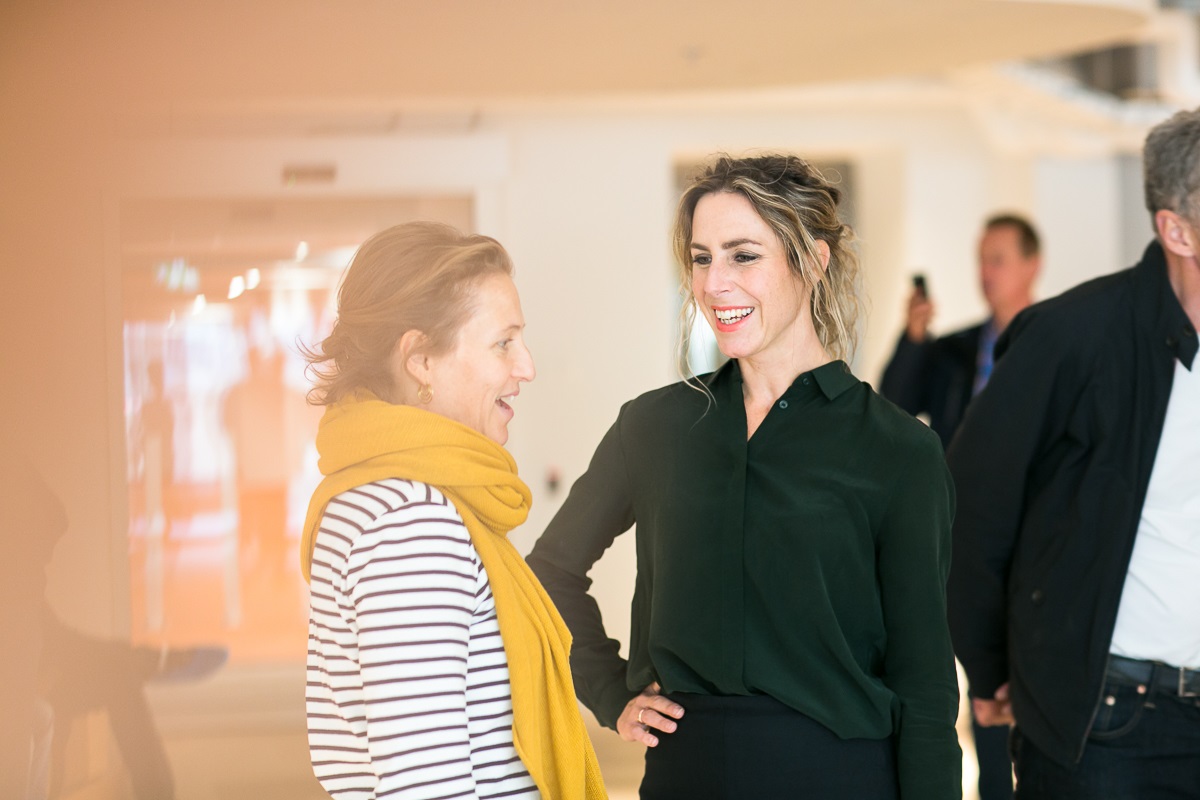 A smile still appears on van der Made’s face as she casts her mind back to the design and construction phase, which took place between 2014 and late 2018. ‘In the end, I really enjoyed that close collaboration with the client. Of course, sometimes it’s difficult to go back and revise your design ideas on the basis of input from the client, but my main feeling is one of admiration for an organisation that was so determined to create something beautiful for its employees and to ensure that the building was as sustainable as possible. That degree of commitment is not something you see very often. And the great thing is that we now have a building that everyone is happy with.’ The office has all the comfort and convenience of a new building, but it still feels intimate and homely. And for van der Made, the most important thing is that the atrium is being used as intended. ‘People really enjoy sitting there, eating their lunch or chatting with colleagues. Mission accomplished.’

Since the end of October 2022, there have been sounds of demolition hammers at work in Prinses Irenestraat as the plasterwork and several floors in the former Amsterdam International Community School (AICS) are being demolished. The work will last until mid-December at the latest.
October 19, 2022

The completion of EDGE Stadium, the former headquarters of Loyens & Loeff on Fred. Roeskestraat is nearly here. The stand-out feature is the newly renovated atrium. ‘After two years of work, it’s really something to see it all coming together.’
October 7, 2022

A community with a social impact, bringing together entrepreneurship, knowledge and business. That’s the VU StartHub, which opened on the VU campus on 6 October 2022. It’s a place where students can make their dreams a reality.
More posts