Steel doughnut with skybar in Valley

Last summer saw the three core sections of Valley reach their highest point. The next milestone involves building a steel frame in the shape of a doughnut. In it, there will ultimately be a huge skybar. 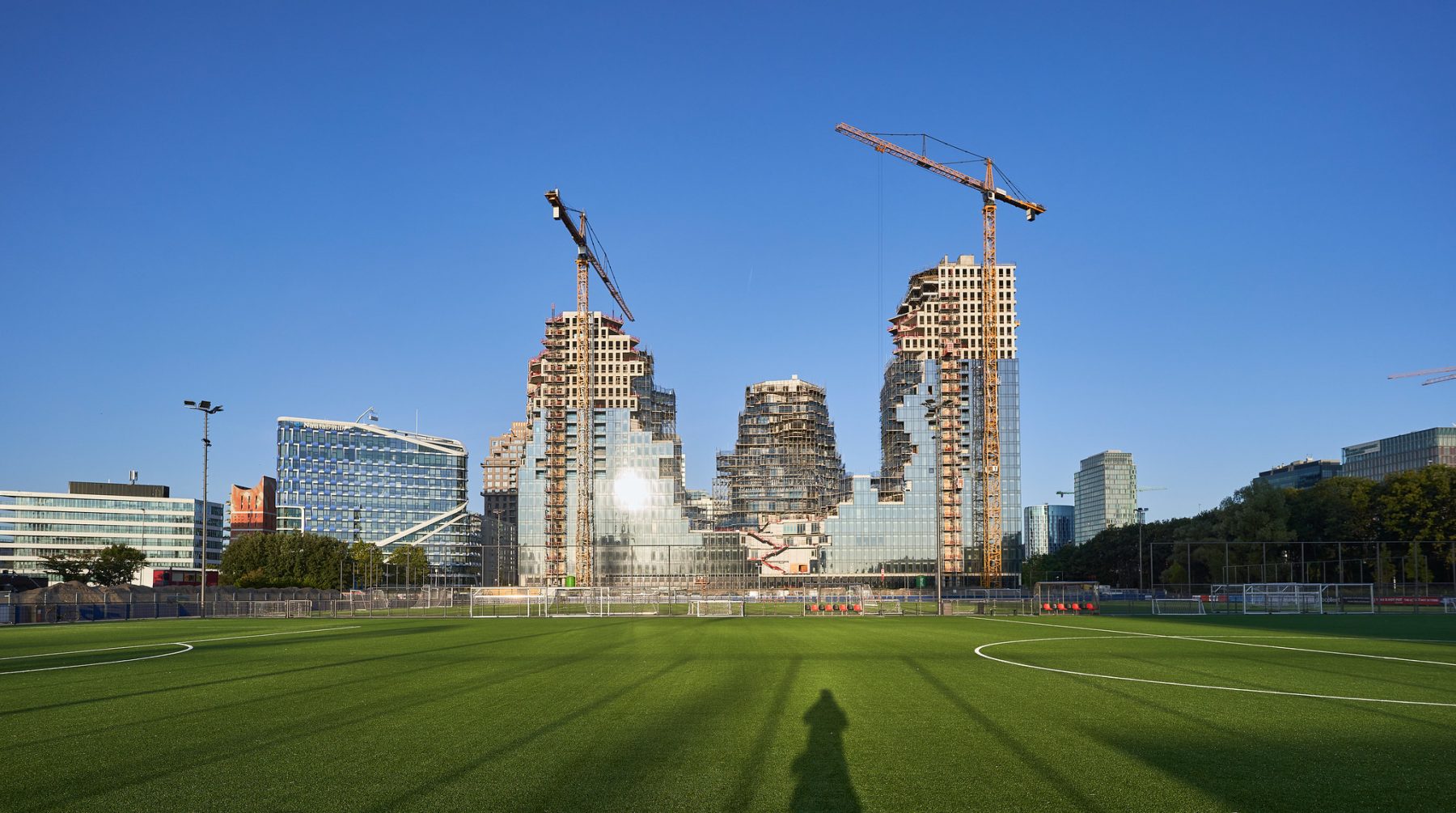 Site manager Ruud van der Thiel from construction consortium Valley Amsterdam (Boele & van Eesteren | G&S Bouw) talks to us by telephone. In the wake of the government press conference on 13 October 2020, the construction site rules have been made stricter, preventing the guided tour that was scheduled. But Van der Thiel is still perfectly able to convey his enthusiasm. ‘Valley is going to be such an eye-catcher.’ 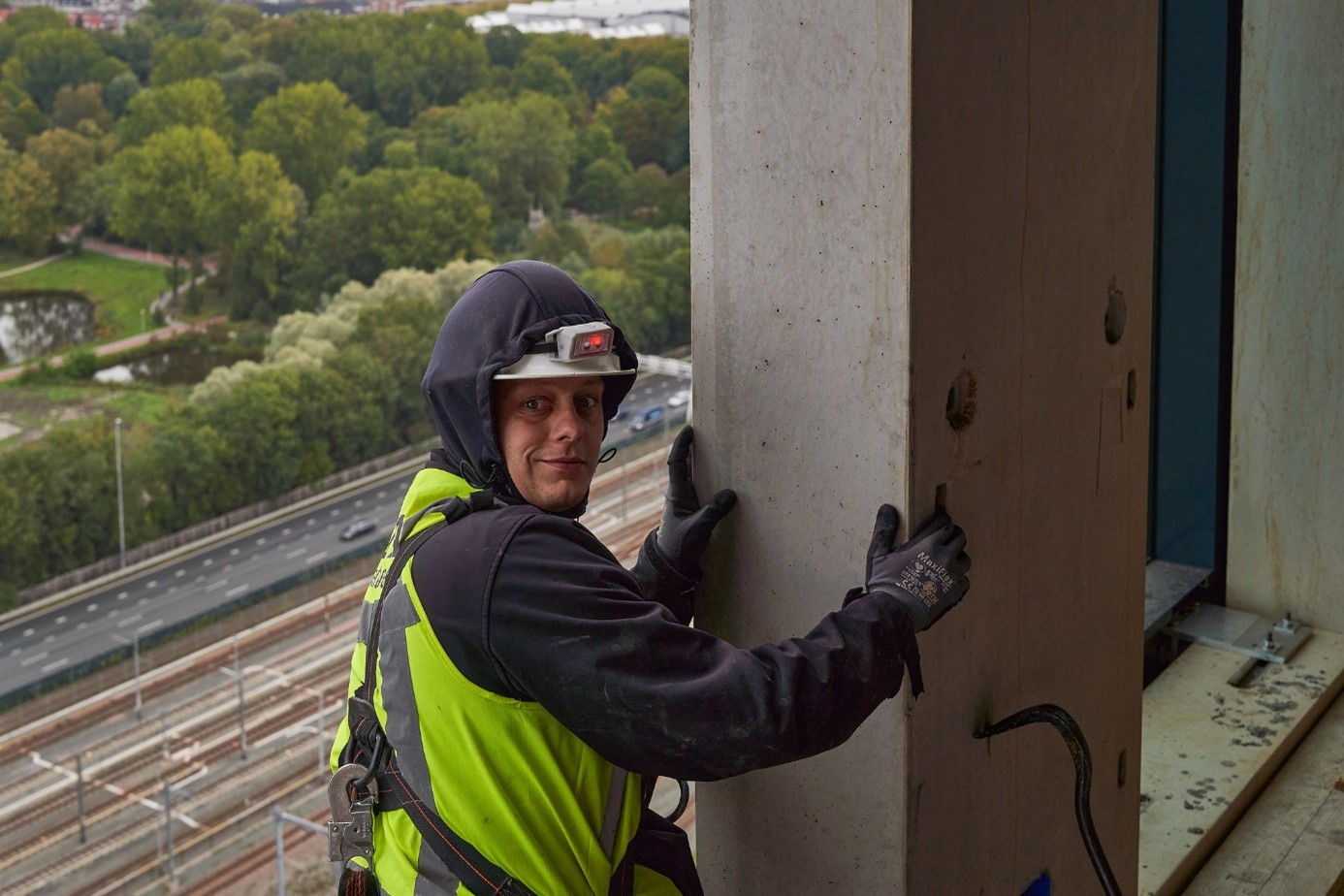 Our photographer’s pictures clearly show how Valley is increasingly starting to look like the artist impressions that are hanging proudly outside the construction site fencing. ‘We’ve already made great progress installing the glass façade elements’, says Van der Thiel. Inside, the finishing work is taking shape and work is underway on installations, tiling, flooring, ceilings, final joinery work, and painting. The utility infrastructure around the building is currently being installed. ‘We’re still using the temporary construction power supply, but this will soon make way for the definitive power system.’

The glass on the façade is almost in place
Marcel Steinbach 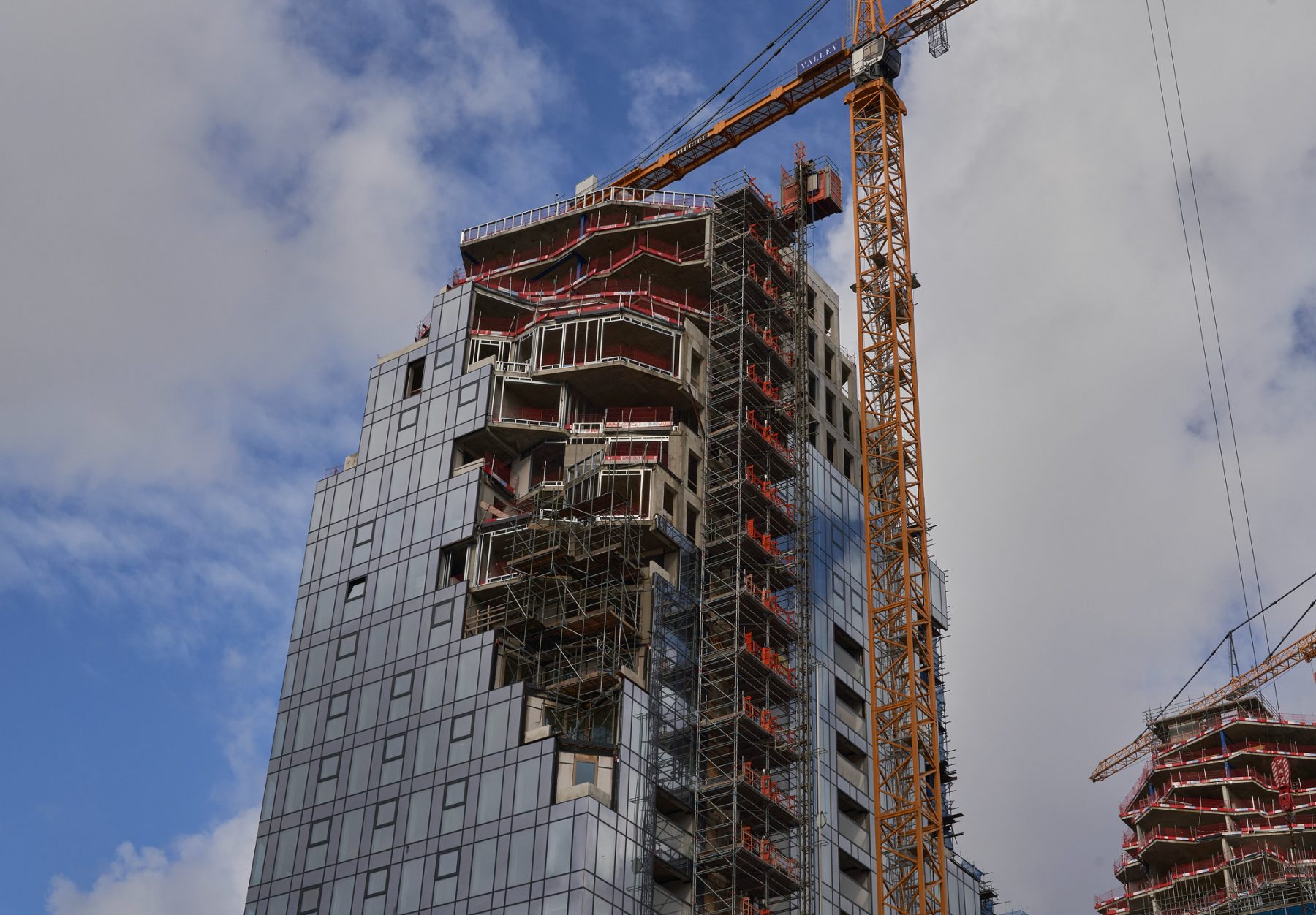 Then there is the steel doughnut, where the skybar will be. It promises to be captivating. ‘We’re attaching the doughnut around the core of the highest, northerly 100-metre tower. Between the existing structure of the apartments and steel skybar structure, we’ll be placing huge rubber profiles to support the upper floors of the skybar. This structure will ensure that residents in the apartments below are not disturbed by the events in the skybar.’

The utilities infrastructure is now being installed
Marcel Steinbach 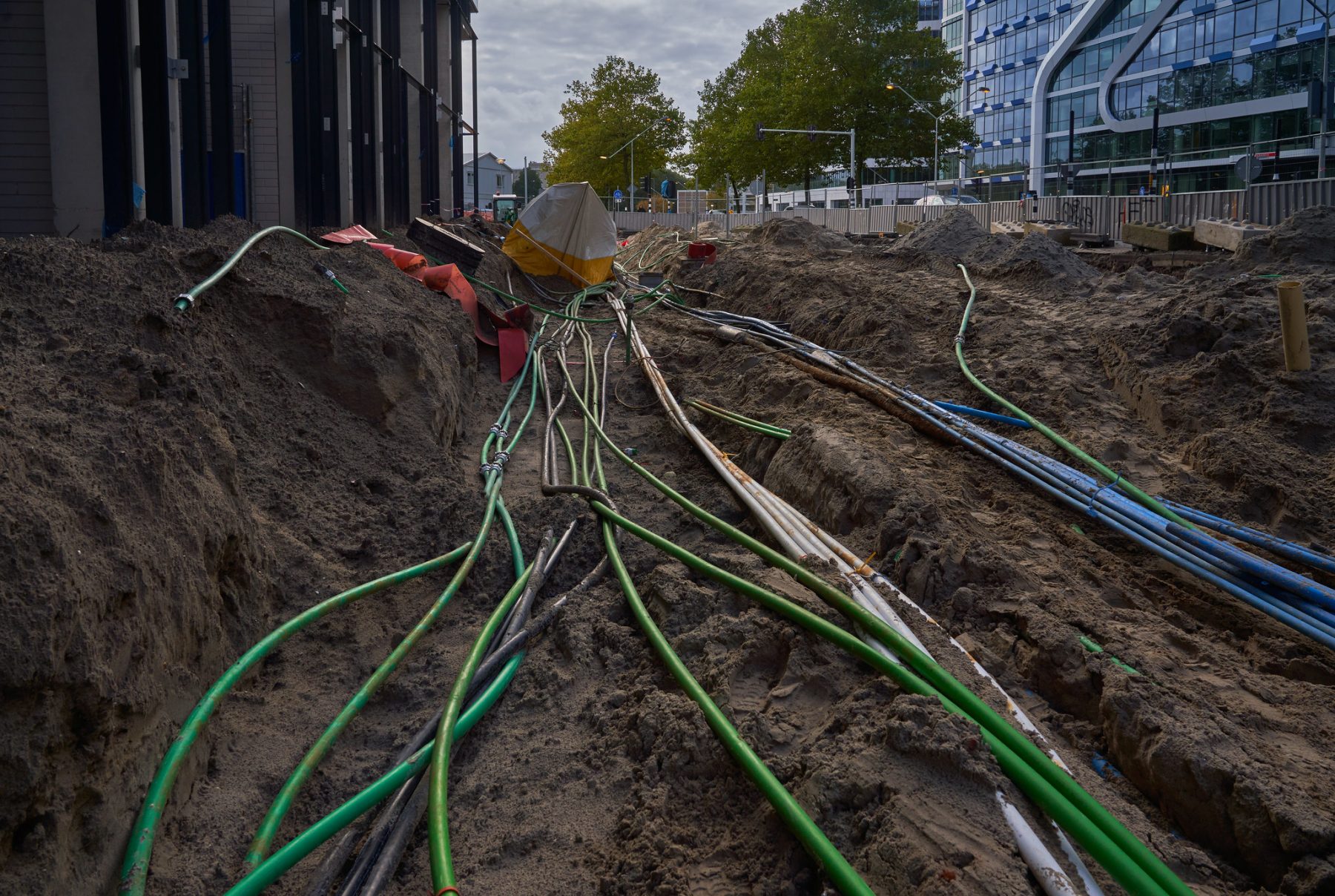 If everything goes to plan, Valley will be completed in the summer of 2021 and there will be a range of public areas you can visit. EDGE is developing Valley; the design is by architect Winy Maas from MVRDV. The valley greenery has been designed by Piet Oudolf. It is being built by construction consortium Valley Amsterdam (Boele & van Eesteren | G&S Bouw). The complex is owned by the RJB Group of Companies.

Valley is scheduled for completion in 2021 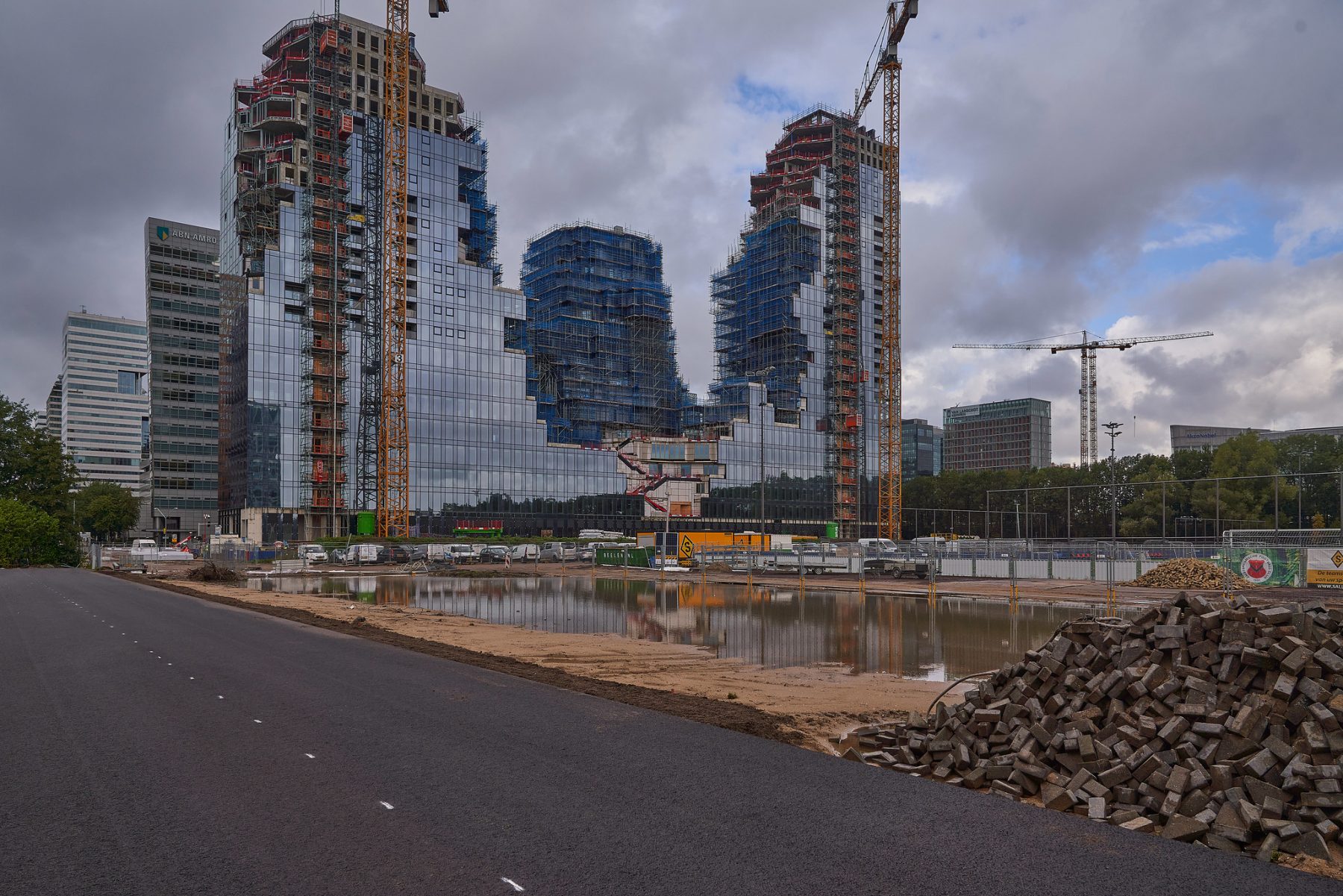 In Parnassusweg, the development of the museum for contemporary art in the former courthouse building (part of which has protected monument status) is now a step closer. The City Council voted to purchase the building on 15 September 2021.
wonen-en
September 4, 2021

A weekly market in Zuidas will be held for the first time on Thursday 2 September. There will be 16 market stalls on Gershwinplein to begin with, offering mainly food products. Amsterdam Zuid district council will examine whether the market is a success after 18 months.
More posts