After four days of work, the ZuidPlus construction consortium has successfully completed the foundations for two roof sections of the Brittenpassage, the extra passenger tunnel that will run under Amsterdam Zuid station. The work was done with almost no problems.

The roof of the Brittenpassage will consist of seven sections in total. The first section has been in position since November 2019. The work done during Whit weekend 2020 was part of preparations for the insertion of the next two roof sections next year. 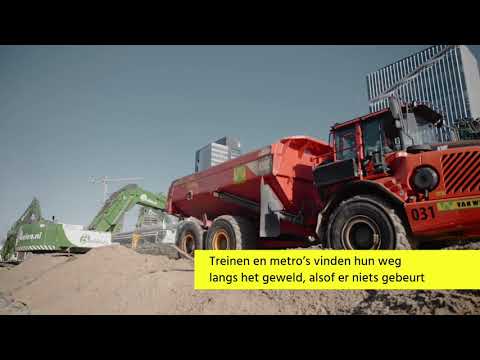 Having been briefed on the extra hygiene measures, the people from the ZuidPlus construction consortium were ready and waiting to start work. After the last train and metro, ProRail and GVB took the tracks out of service slightly after 01.00 in the morning, the power was turned off and security equipment removed. The builders removed rail profiles, dragged sleepers from their position and dug out the ballast (track gravel), which was then transported away.

In the night of 29 May: the metro power rails are removed...

...and, on Friday morning, the rails and the gravel (ballast) Photo: Marcel Steinbach

After that, the digging could start in order to expose the (hollow) foundation piles already inserted into four channels in the ground last year. These are the groups of foundation piles on which the concrete structure of the future Brittenpassage will rest. Every hour, trucks were removing around 80 cubic metres of soil. The foundation piles (hollow tubes) had their ‘lid’ removed with a hot-air gun. Cyclists along Parnassusweg experienced some minor disruption. For the work on the Brittenpassage, the cycle path on the eastern side had been closed and the western side was also occasionally out of action for the works on the courthouse. This called for the deployment of road traffic controllers. At the end of the afternoon, demolition started on the final section of the old Amstelveen line tunnel, because this is where the new passenger tunnel will be. A ‘woodpecker’ – a hydraulic breaker – noisily removed the roof. Crushers were used to pulverise the walls of the old tunnel and the rubble was removed. The work proceeded more smoothly than expected. The woodpecker had finished its work by 22.30, half an hour ahead of schedule.

The final section of the old tram tunnel is demolished

One of the 4 foundation pile channels. The piles are burnt to the right length Photo: Marcel Steinbach

There was some delay in loosening the reinforcement cages. Because there was so much to do and a limited space in which to work, it was not possible to use more than two cranes. The work therefore took slightly longer than intended. But as the morning progressed, things suddenly sped up: in just 40 minutes, eight piles were reinforced and things were soon more or less back on schedule. In the evening, the pouring of concrete into the piles began, after which the lid was welded on again. The hole left by the old tram tunnel was refilled with 150 m³ of sand an hour. By 22.30, the ground was back to normal level. The biggest setback was the failure of one of our two webcams: precisely the one with the best view of the works. A big disappointment for quite a few followers, and indeed for us.

...to be hoisted into the hollow foundation piles

On Sunday morning, concrete was poured into another of the four channels. The other three were already complete and had been filled with sand. It was then time to put the tracks back into position. First of all, the track ballast was put back, followed by the track. The concrete sleepers and rail profiles were then replaced and welded back together.

The tamping machine then arrived to ensure the ballast was properly in place under the sleepers. After all, the tracks need to be on a very stable, flat bed of ballast, enabling trains to travel over it without noise. In the meantime, railway track 4 was given its final ballast as well. The metro power rails were then repositioned and welded into position. As the platforms were put back after four days of work, things were gradually starting to look like the old Amsterdam Zuid station. But with the start of the new one underneath it.

A tamping machine packs the ballast under the sleepers Photo: Marcel Steinbach

The work was now more or less completed, but the railway tracks remained out of service for the night from Monday into Tuesday. This was because the tracks were now a few centimetres away from their original position. This called for some slight modifications to the overhead wires. Once that job was done, trains and metros started running again from 05.00. For the first time for a long time, trains were running the normal service.

Until 4 June at the latest, ZuidPlus building consortium will be removing several dead trees that are close to the motorway. The trees pose a risk to traffic because of branches falling off and the possibility of them being blown over by the wind.

Zuidasdok continues with work on the Amsterdam Zuid station passage

Building work on the extra passenger tunnel under Amsterdam Zuid station is set to continue. Work will commence in the night of Thursday 28 and Friday 29 May 2020, and trains and metros will resume normal service at 5.00 on Tuesday 2 June. It will be quite a logistical challenge. Watch the livestream starting Thursday evening.

Over the long Whitsun holiday weekend at the end of May, we will be continuing work at Amsterdam Zuid station, as part of the Zuidasdok redevelopment project. Between the evening of Thursday 28 May and the morning of Tuesday 2 June 2020, we will be working on the foundations for two roof sections for the extra pedestrian passageway for the station.

Building work on Zuidasdok is set to continue. As became apparent on 26 March 2020, the exploratory study carried out by the Minister of State, Sybilla Dekker, was enough to convince the administrators. Instead of suggesting ways of economising on the plans, Dekker argues the case for expanding the ambitions.

The ambitions and scope of the extensive Zuidasdok infra-project have been reconfirmed. The government, the City of Amsterdam, the Transport Authority Amsterdam and the Province of Noord-Holland have all endorsed the recommendations of the Minister of State, Sybilla Dekker.

During the night of Monday 23 March to Tuesday 24 March, we will be driving two seven-metre foundation piles into the ground between 1 a.m. and 4 a.m. The work will be carried out immediately to the west of Amsterdam Zuid station.