In late February 2021, work is set to start on the construction of CROSSOVER in the Kop Zuidas area, at the corner of the A10 Zuid exit and Europaboulevard. The building promises to be an exciting blend of housing, employment, and amenities. 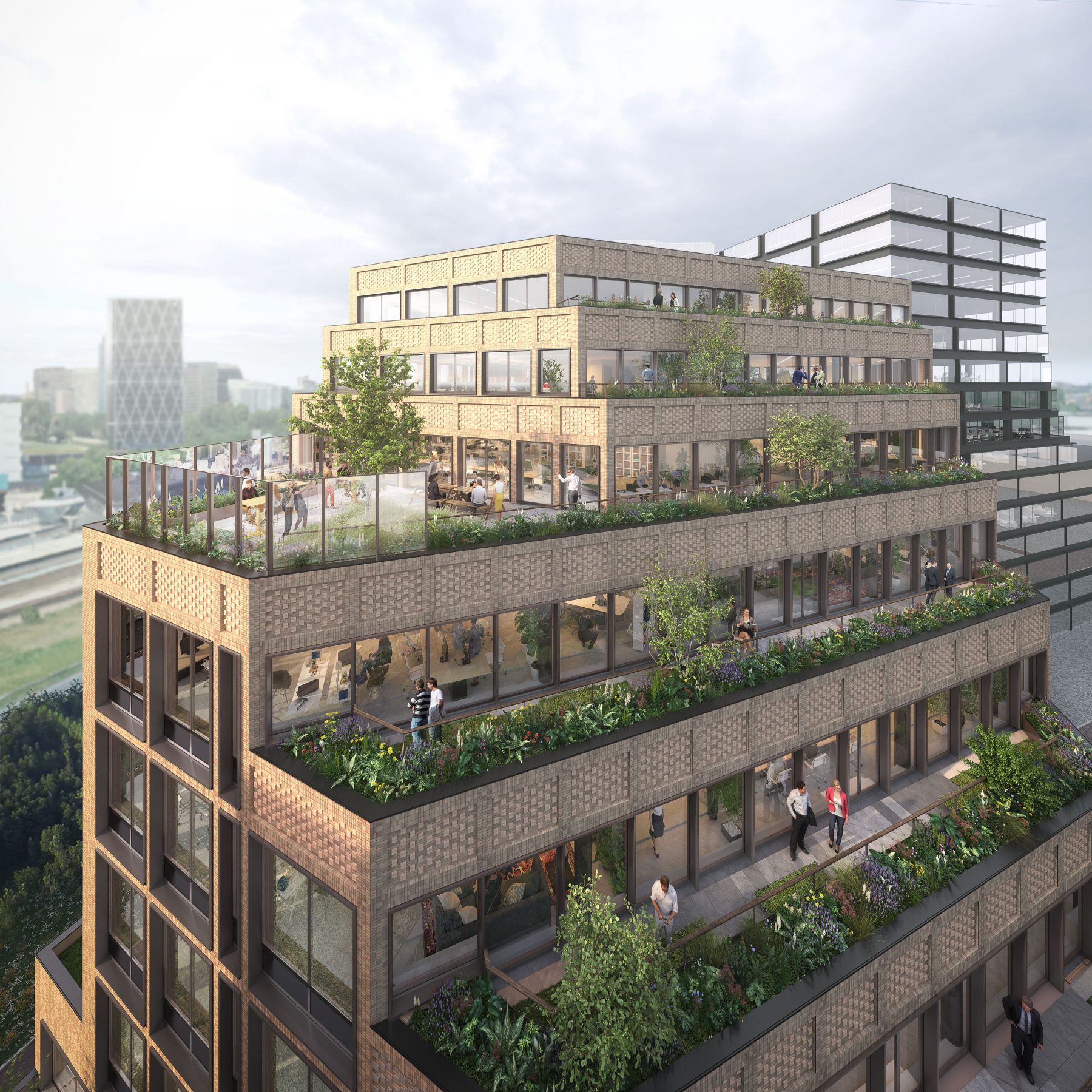 It has taken a while for work to be able to start on CROSSOVER, but from the end of February 2021, it is actually happening. Area developer AM was awarded the tender in November 2017, thanks to the impressive level of ambition in its proposal. ‘We’ve actually been working on CROSSOVER since 2016’, says Raymond Stijkel, development manager at AM. ‘It’s good that the design and coordination phase is now behind us and the real work can begin.’ Construction is starting slightly later than planned, in part because of the uncertainties caused by the coronavirus crisis. But in just a few weeks, the CROSSOVER plot will become the backdrop for sheet piling and foundations, in preparation for the construction work. ‘Of course, it’s wonderful to build in such a special place. It’s a location that straddles the urban environment of Rivierenbuurt and Amsterdam’s premier business district. What’s more, RAI station, the North/South metro line and the A10 are literally just around the corner.’ 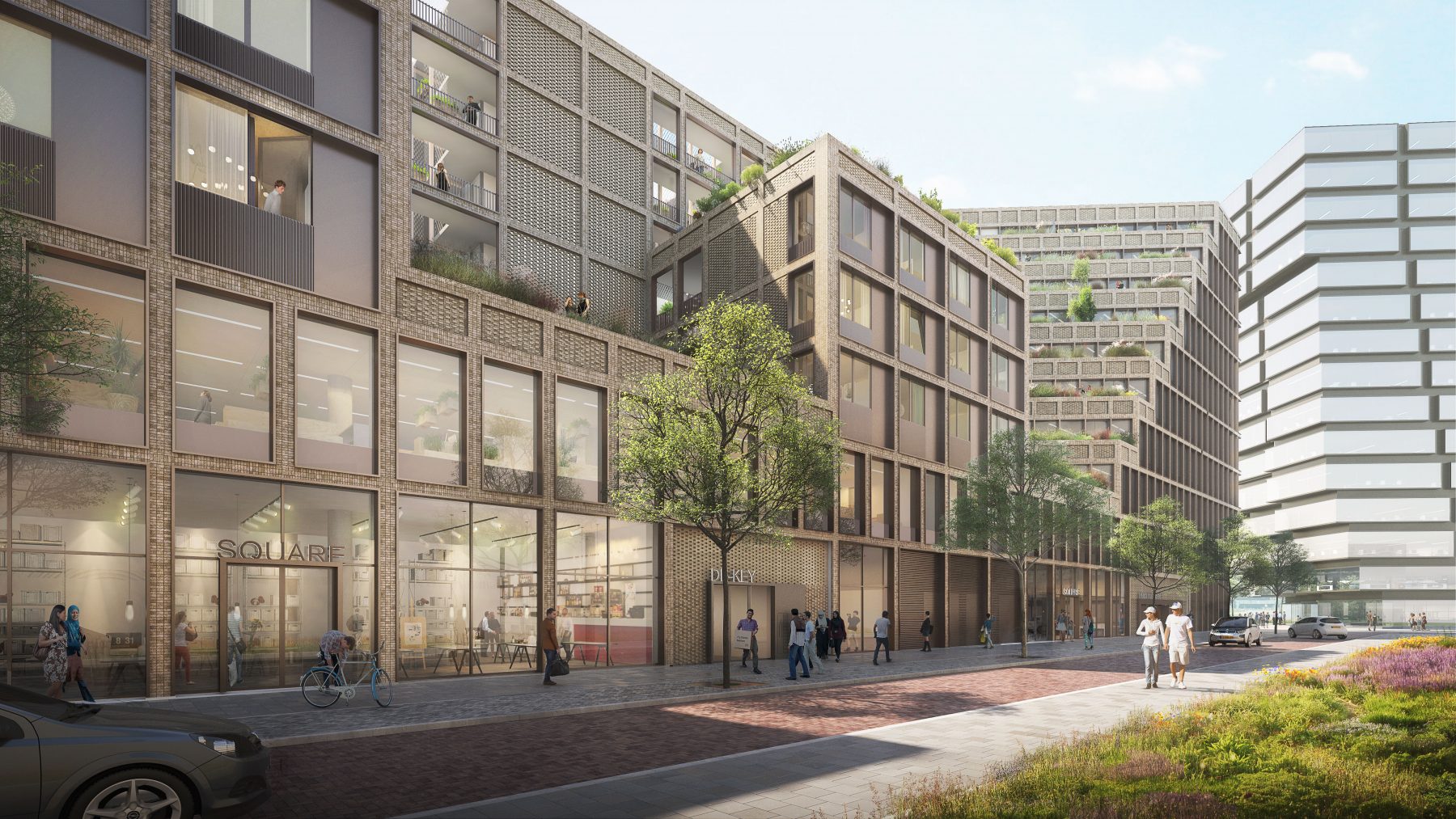 In 2016, several different developers pitched their concepts, based on some clear principles set by the City of Amsterdam. Most importantly, it needed to be a building with multiple functions: office accommodation, housing – including social housing – and cultural and commercial amenities. Stijkel: ‘That immediately made it a very exciting brief. Not only for us, but also for the Team V firm of architects. Our basic principle was to aim for an interesting mixture of users that complement each other.’ 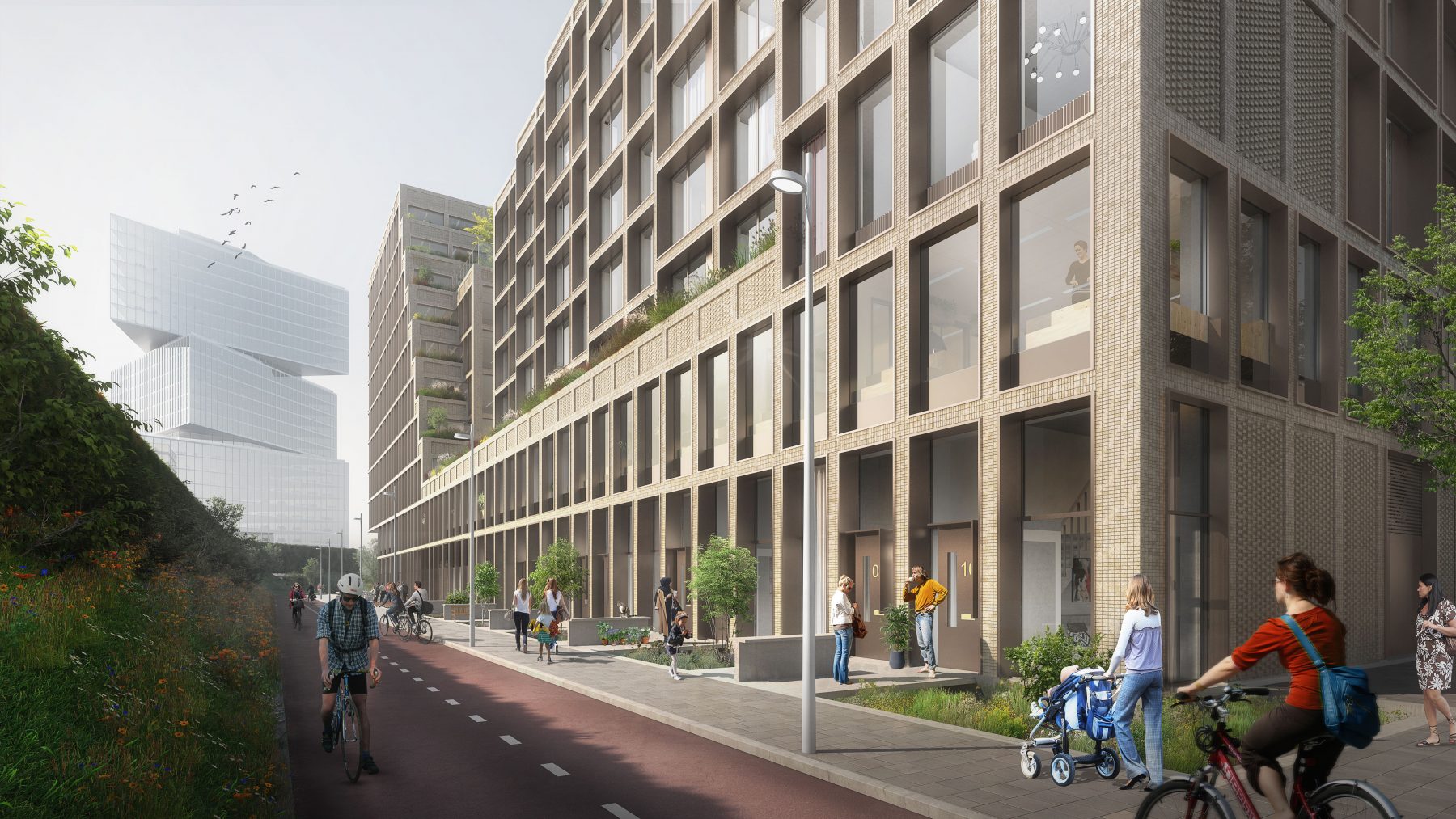 The City of Amsterdam also set exacting demands for the building’s sustainability. ‘With CROSSOVER, we are developing a mixed-use building that’s set to be one of the Netherlands’ most sustainable buildings. In addition, health and well-being are key elements in the design – particularly topical at the moment. This will be reflected in such features as abundant natural daylight, greenery, and excellent ventilation.’ Another factor that needs to be taken into account is the noise from the A10. ‘Although the A10 provides great accessibility, you don’t want to be able to hear the car noise in the building. The good news is that modern façade design and use of materials effectively resolve that problem.’ 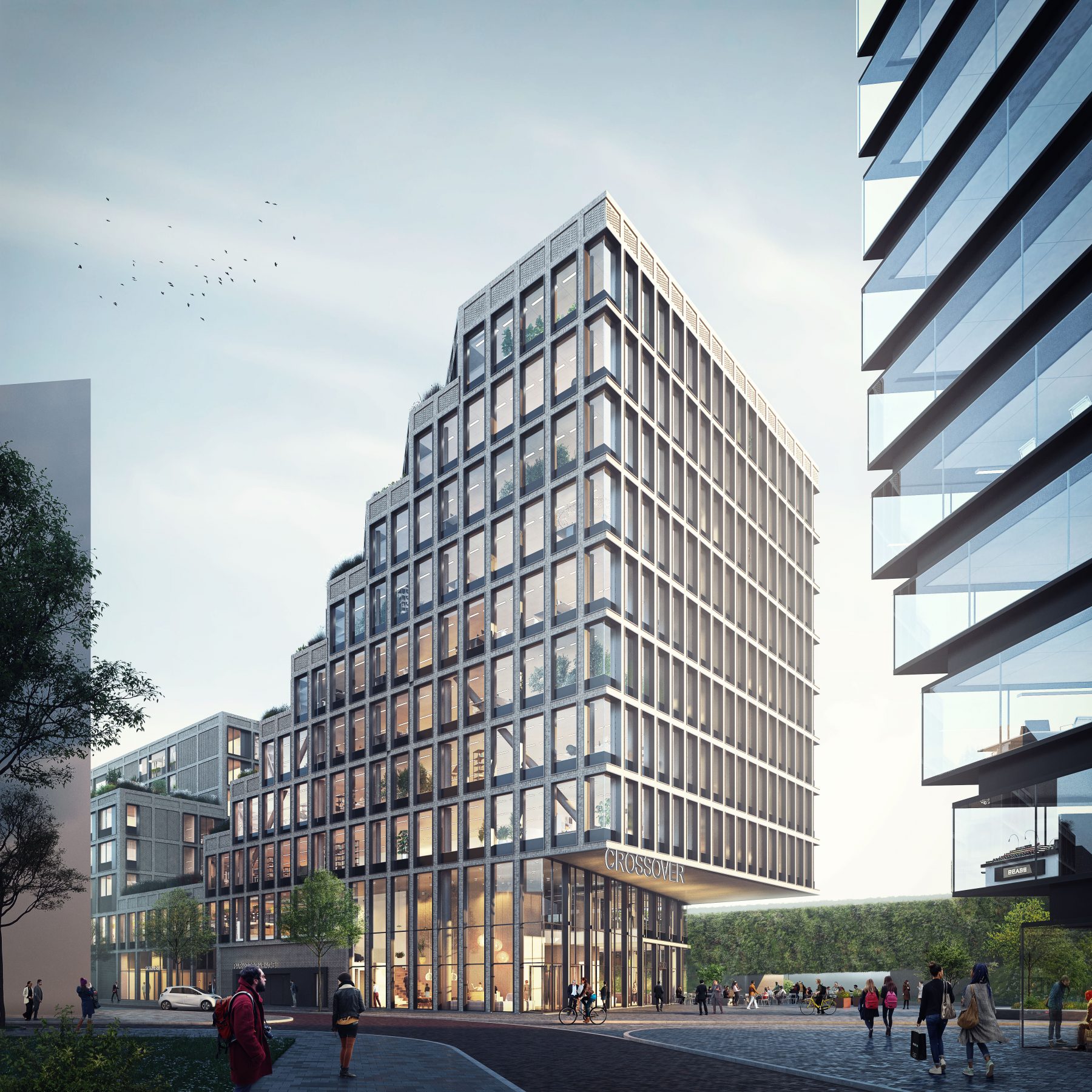 CROSSOVER will have six floors of housing in the lower section of the building and nine floors of offices in the higher tower. They will be connected to each other on the ground floor. ‘That’s where we will be creating spaces where people can meet. It will include civic and social functions, as well as hospitality and catering. The office section will aim to provide space for an interesting mixture of different tenants. A unique feature is that the tenants on every office floor will also have a green terrace at their disposal.’ 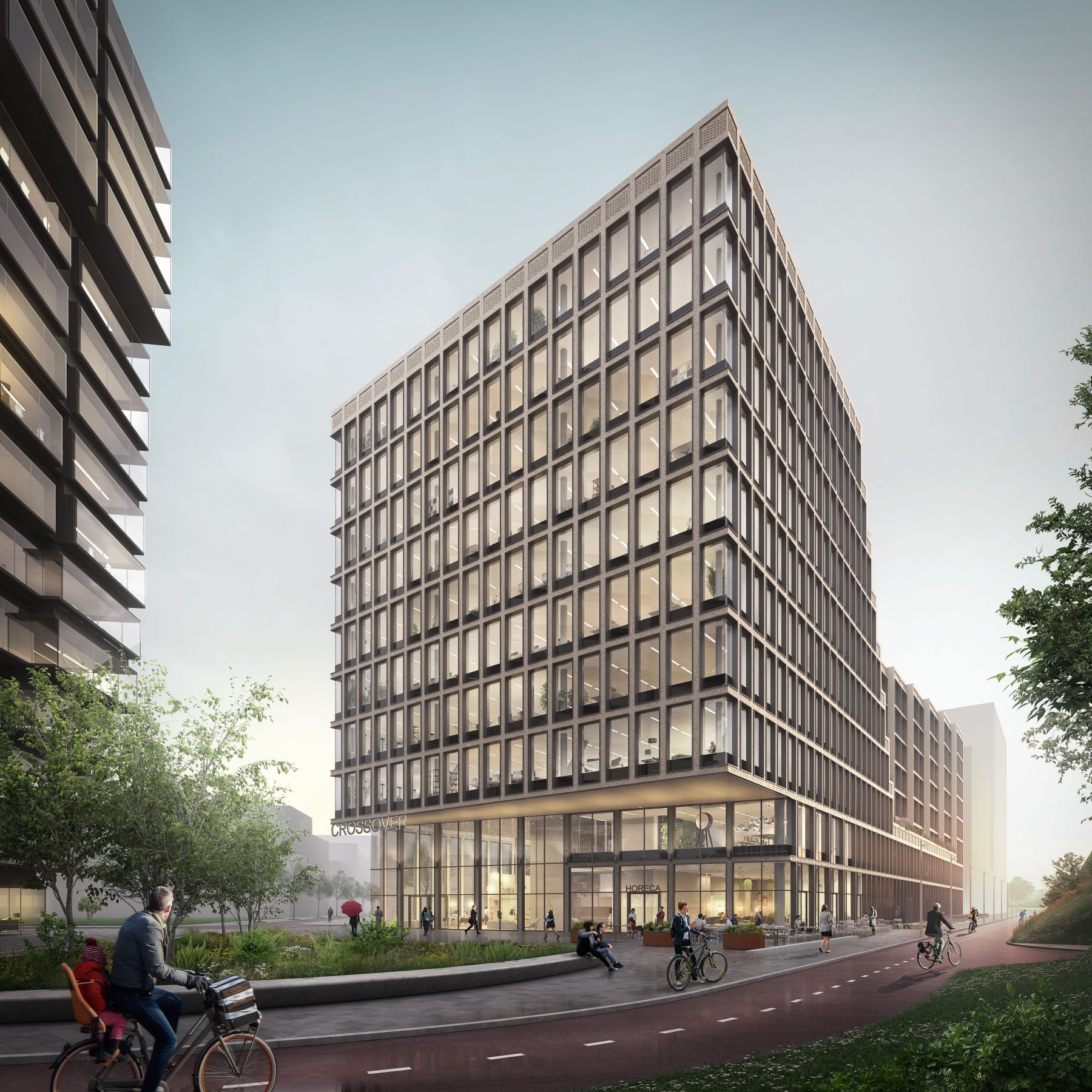 The social rental housing in CROSSOVER will be partly for young people and partly for people with temporary admissions. The landlord will be Woonstichting De Key. Residents will be able to meet each other in the communal areas. In addition to the 120 social housing units, the building will also have ten owner-occupied studios. Outdoor space has also been included in the design: there will be various terraces across the building for residents to use. Stijkel: ‘All in all, CROSSOVER will be a place with something for everyone. An attractive and extraordinary addition to Zuidas.’ The complex is scheduled for completion in mid-2023.

A weekly market in Zuidas will be held for the first time on Thursday 2 September. There will be 16 market stalls on Gershwinplein to begin with, offering mainly food products. Amsterdam Zuid district council will examine whether the market is a success after 18 months.
wonen-en
August 27, 2021

Museum of Contemporary Art in the old court house building

There are plans for a new art gallery in the old court house on Parnassusweg, so Zuidas could soon be home to another cultural hotspot.
More posts