‘Each of the roof sections that need to be placed over the new pedestrian passageway at Amsterdam Zuid station is unique’, explains planning engineer Jim Kerssens. The construction consortium ZuidPlus is currently working on the third roof section – there will be seven in total. 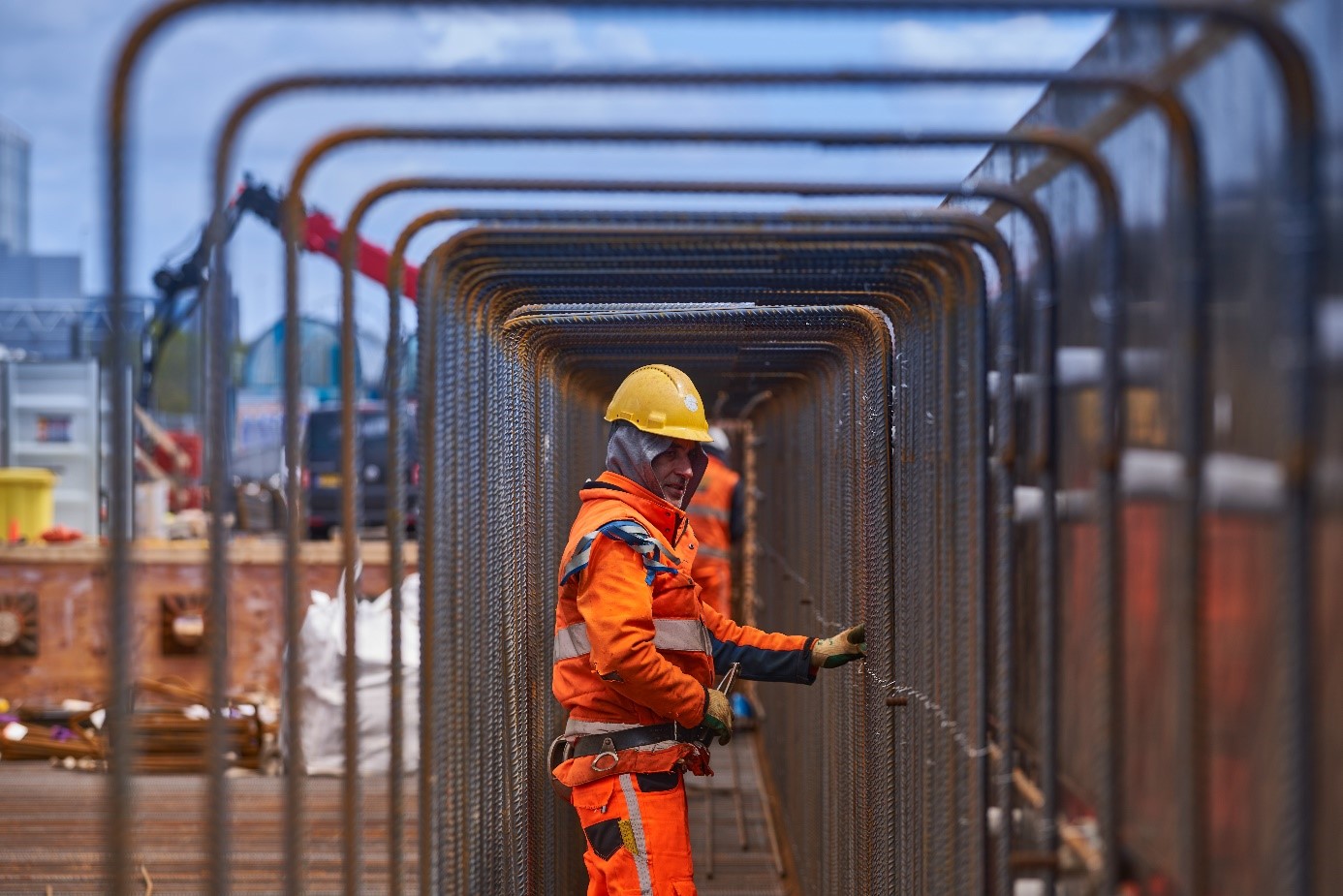 The sun is shining and it’s a lovely day; there are certainly worse places to be today than working outdoors in the fresh air. Even if the location is a little hectic: every few minutes a metro stops or a train rushes past at high speed. But Jim Kerssens is clearly enjoying himself. ‘This is so much better than working from home!’ As we walk along Parnassusweg towards the construction site for Zuidasdok, we can see what his team is currently working on. The contours of roof section 3 are clearly visible, and the large amount of steel reinforcement is immediately obvious. 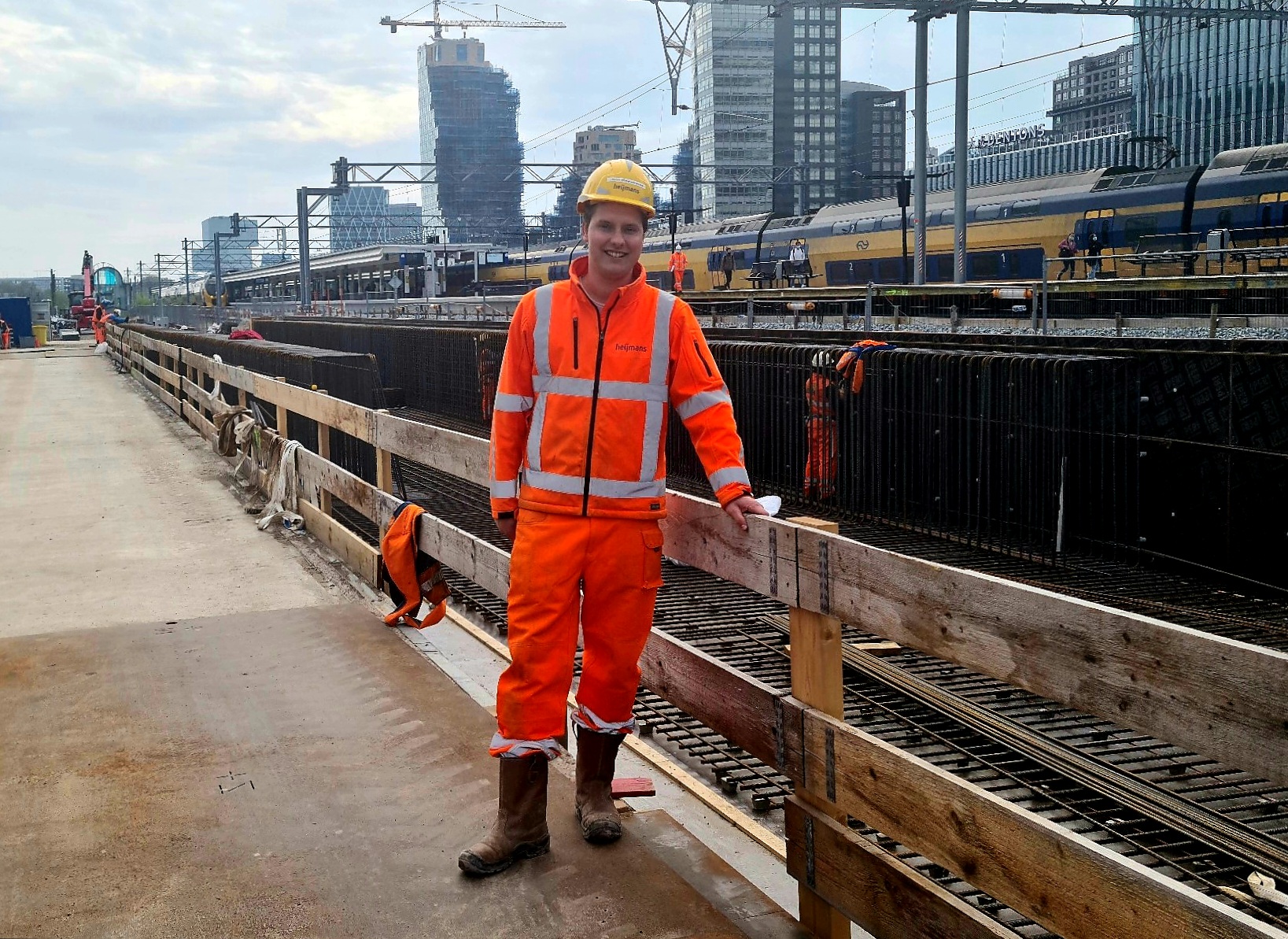 One of a kind

‘Each of the seven roof sections that will make up the roof of the new pedestrian underpass, to be known as the Britten Passage, is completely unique’, explains Kerssens. ‘The first section, which we put in place in November 2019, was very large, measuring 70 metres long, 12 metres wide and 2 metres thick. The reason it had to be so big is because it will have to support the weight of two railway tracks.’ Section 2, which is now waiting to be put into place and is temporarily being used as a roadway for on-site logistics vehicles, was relatively simple. ‘That section will only be supporting the metro track, so it won’t need to handle the same weights and forces as the sections supporting the railway tracks. Section 2 is also quite narrow – 4 metres by 70 metres – and can best be described as a thick rectangular slab of concrete, also known as a slab deck. Things will get more complicated again for section 3.’

The eight holes for the prestressing ducts
Marcel Steinbach 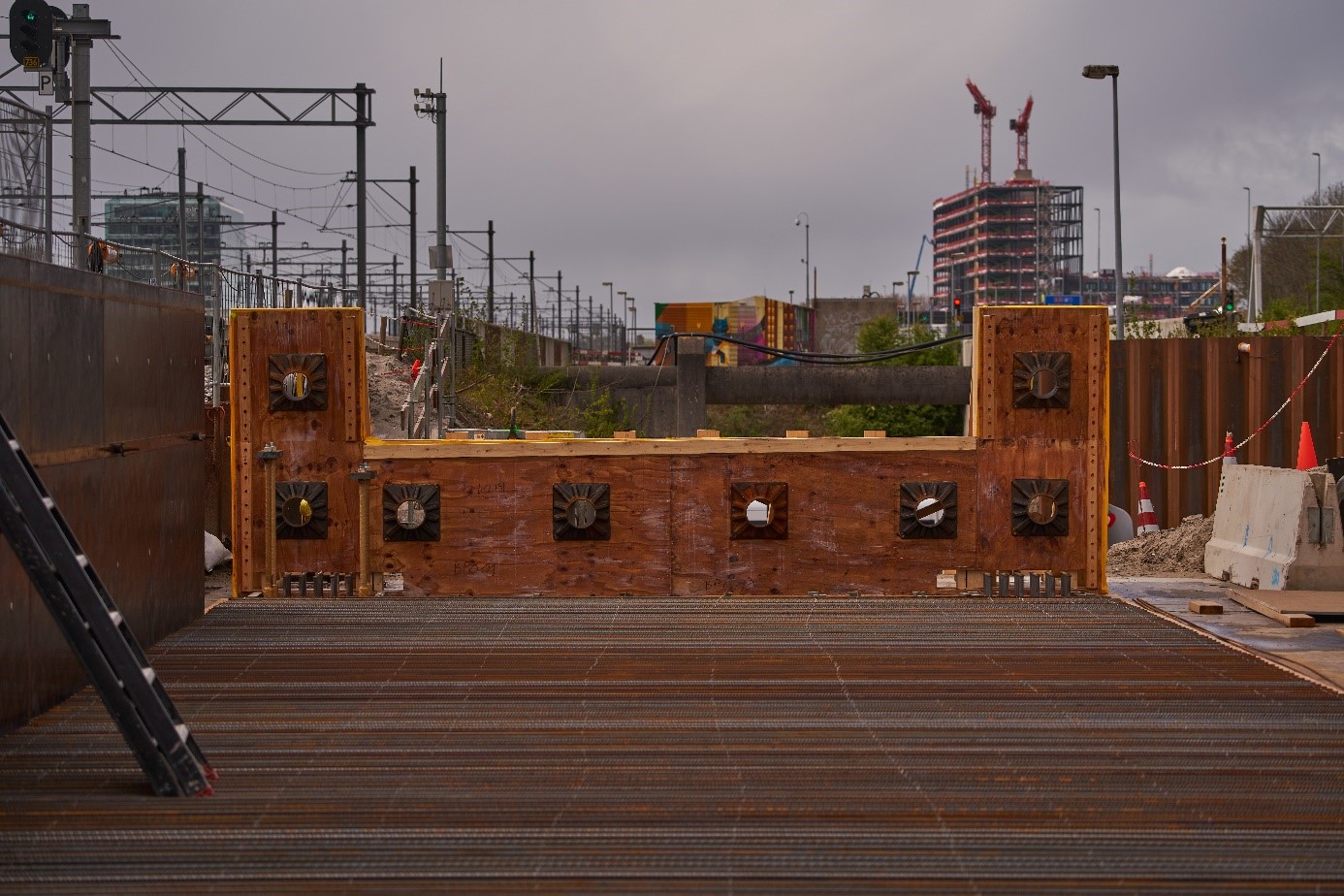 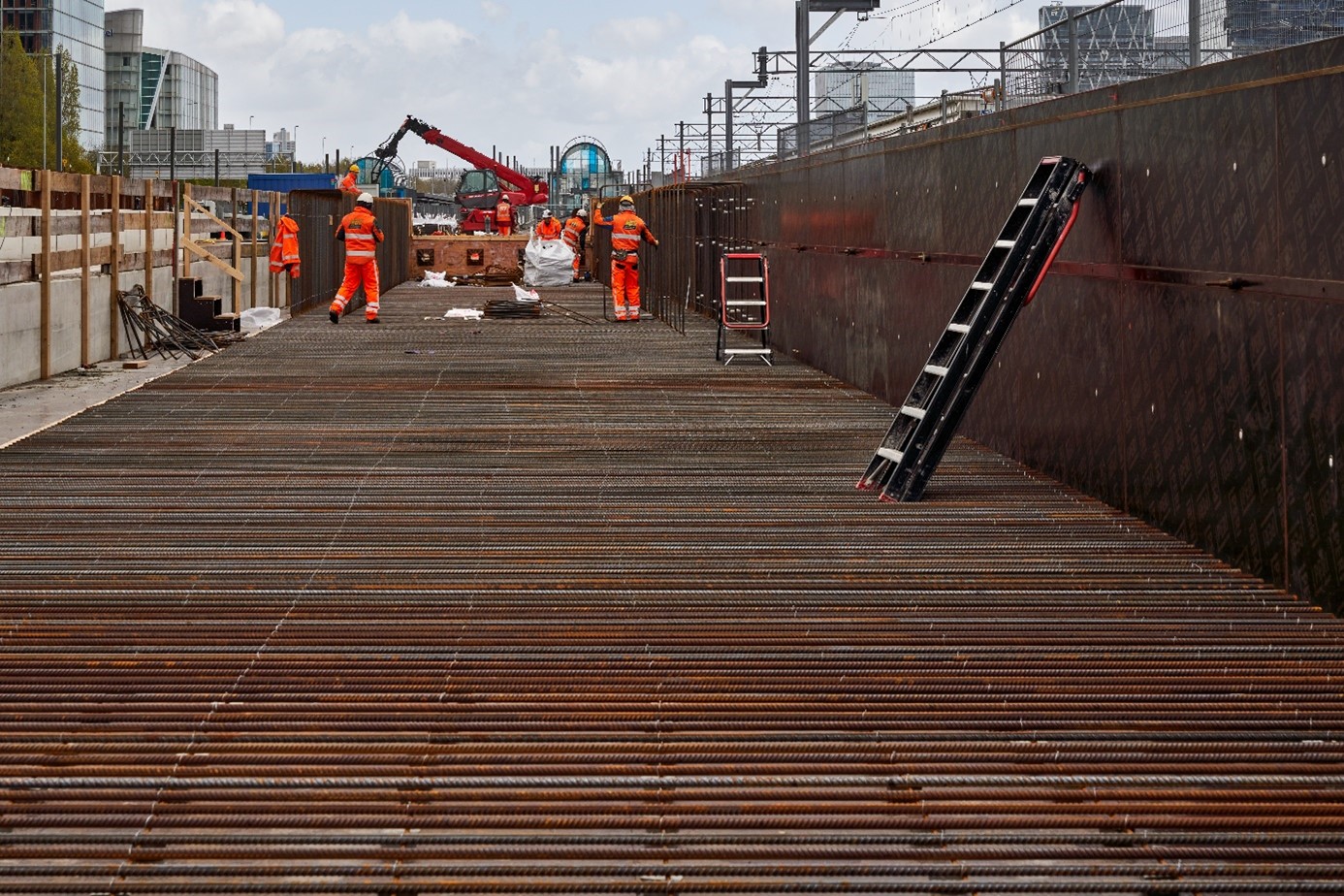 Kerssens points to the steel reinforcements in roof section 3, which are currently being added. ‘This roof section will also be supporting a railway track, so it will need to withstand enormous forces as the trains apply their brakes. The deck will also have to support freight trains, which are even heavier than passenger trains because in the future those may be using this route, too. To make sure that this roof section can handle these heavy loads, we are adding 100 tons of steel reinforcement, and we will also add eight prestressing ducts to the U-shaped section. These ducts will contain steel cables running the entire length of the roof section. Once the concrete has been poured, the cables will be tightened, making the section even stronger and able to withstand higher forces.’ Also, because of the trains that will run over the top of it, this roof section needs to be a little wider – about 6 metres by 70 metres. 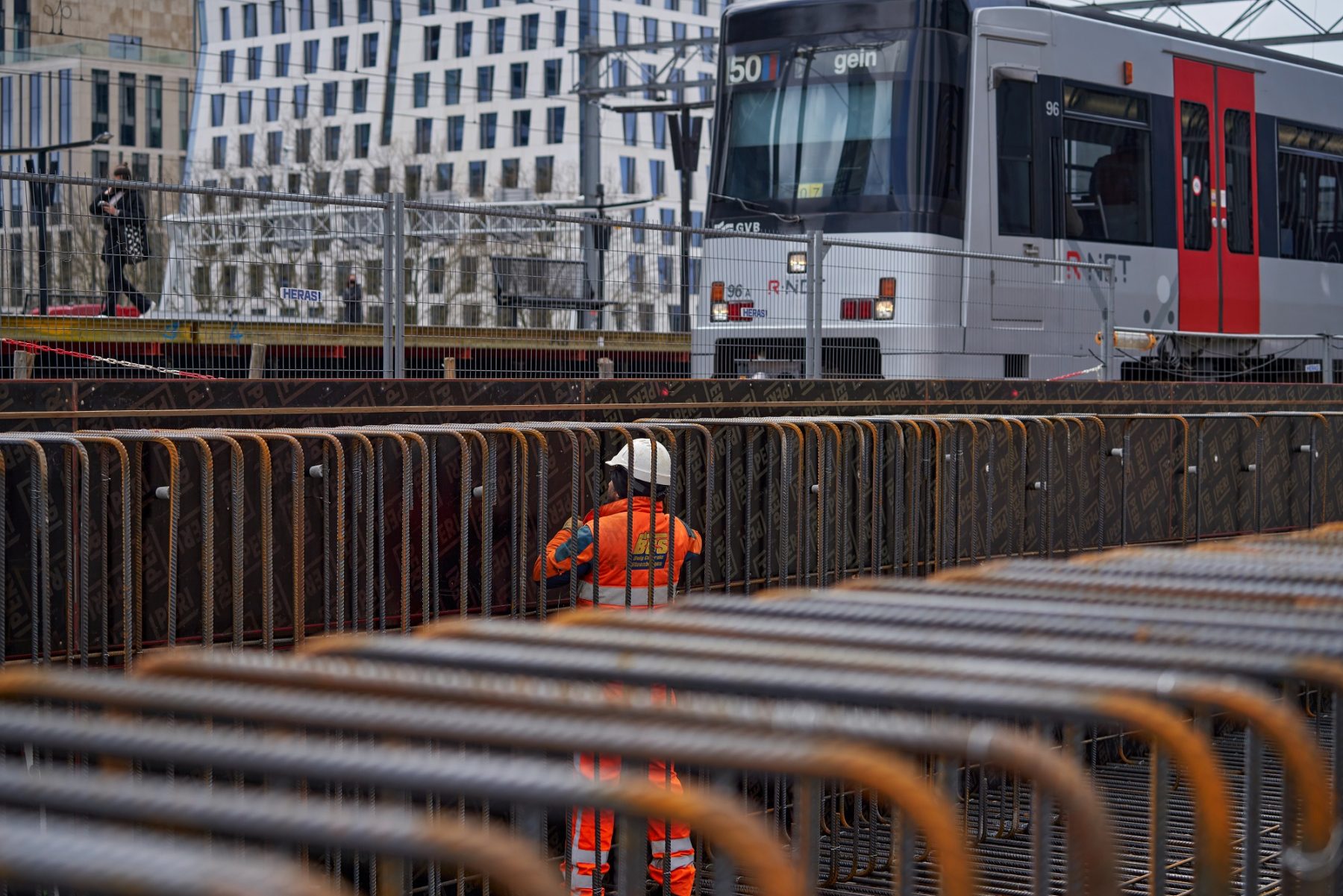 You can already clearly see the U-shape of the section at the end. The section will be filled with ballast and also hold the tracks themselves of course. ‘But not for a while yet. We expect to have all the reinforcement finished by the end of next week. Then we’ll put the steel cables into the prestressing ducts and install the casing on the outside and inside.’ At the start of June, the concrete will start arriving in trucks. They will be transporting approximately 500 cubic metres of concrete to the site. ‘That’s always one of my favourite moments, when the concrete is poured.’ As soon as the concrete has reached the right strength, the steel cables will be tightened, but the ZuidPlus team’s work certainly won’t end there. ‘After that we’ll start working on the decks and the preparations for the track closure from 20 to 23 August 2021, when we’ll slide roof sections 2 and 3 into place. Last Easter, we successfully installed the foundation for the roof sections.’ Kerssens smiles: ‘The foundation is now hidden under the tracks, so let’s hope it’s still there when we excavate it in August.’ 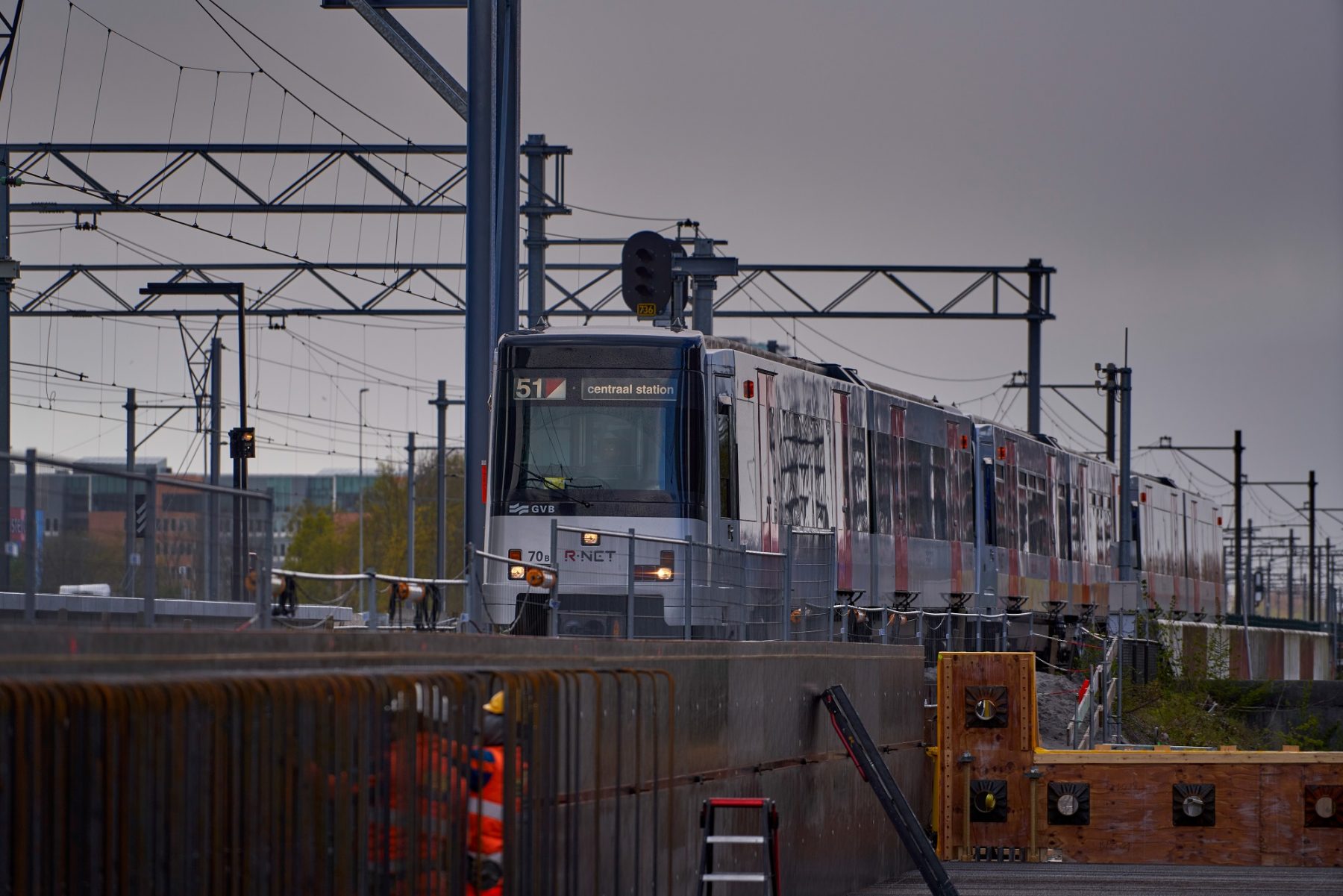 As we talk, it is obvious that Kerssens is really enjoying this project. ‘I’ve been working on Zuidasdok for almost three years now, so I’ve really been able to contribute to the project together with the team. I enjoy the complexity of the project. For example, right now, we’re looking at how we can ensure, in this tightly confined space, that all the concrete for roof section 3 can be poured simultaneously from different trucks in June. And of course, without getting in the way of public transport. It’s quite a puzzle: it takes teamwork and lateral thinking. But that’s what I like about it!’

Last weekend (21-22 August 2021), we took a major step in the construction of the second pedestrian passageway underneath Amsterdam Zuid station. The work involved installing two enormous concrete roof sections into place for the new passageway. Everything went like clockwork.
reizen-en
August 21, 2021

How do you build a station passage? Watch the video