It was an exciting weekend. Thousands of people were watching in person or on the webcams, at times teetering between hope and trepidation. But the operation was a success. The first roof section for the extra passenger tunnel is now in place. 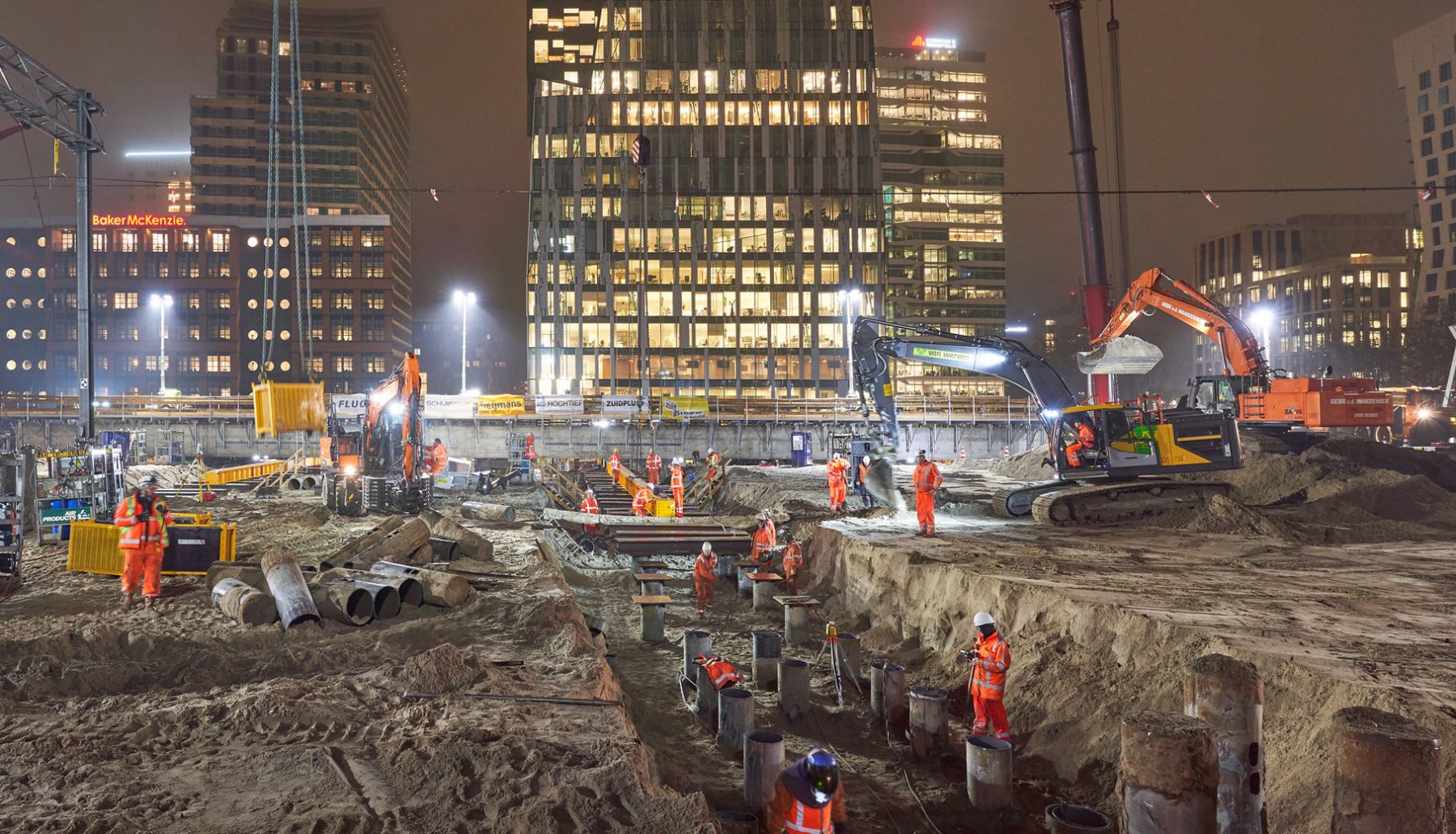 Anyone who clicked on one of the three webcams on Saturday morning probably got a bit of a shock. In the hours preceding that, the giant section of concrete lying alongside Arnold Schönberglaan was supposed to have been moved to its final position, centimetre by centimetre. But the monster was still in the same place as it had been on previous days. One minor delay after another revealed just how complicated it is to execute such an enormous job on a site the size of a postage stamp. A brief delay on one section meant that the next machine or next truck was left waiting, creating a kind of chain reaction. But then things speeded up, even faster than expected. Instead of moving just 7 metres per hour, the concrete deck slid into position at a speed of 8 or even 10 metres every hour. Thanks to this acceleration by construction consortium ZuidPlus, it was possible to make up valuable time. And at 11.58 a.m. on Saturday, the first section of the new passenger tunnel – the Brittenpassage – was in position, under platforms 2 and 3. Even as it was being shifted into place, the guides behind the roof section were being removed and trucks arrived to rebuild the A10 South with 2,500 cubic metres of sand.

Extras and pieces of scenery

But the main event actually started on the evening of Thursday 31 October. From 21.00, we began to close the roads. By 22.00, we had finished the job and there were red crosses lit up across the road on the A10 South. But that didn’t last long. The crosses stayed lit up, but the road itself disappeared. And not only the road. The entire area was transformed into a kind of stage, with countless extras and pieces of scenery. Asphalt was removed, tracks and platforms disappeared. And there was a lot of digging, in order to expose the foundation piles put in position earlier, across which the roof section needed to be placed. 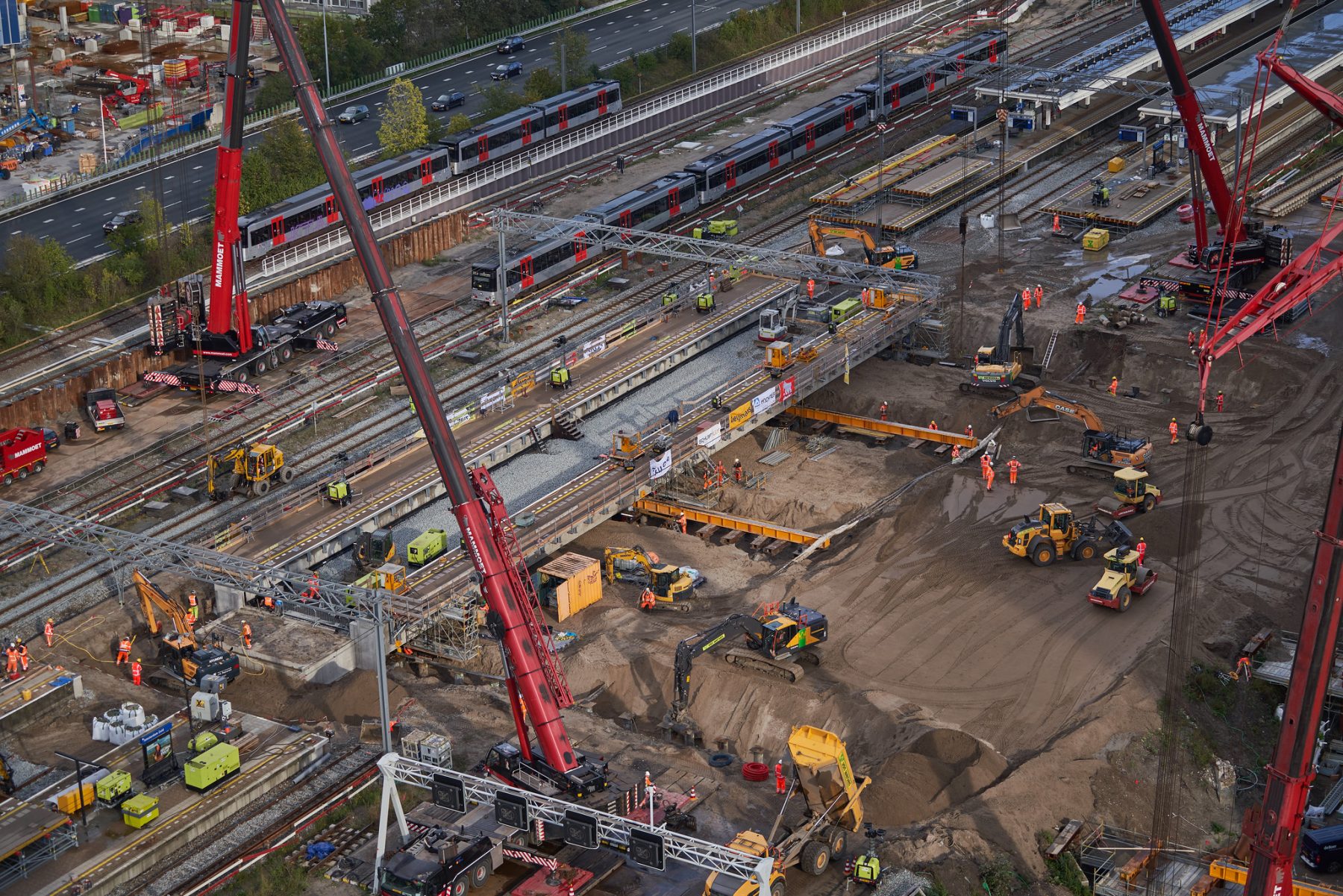 Friday, 1 November was a huge challenge, especially for traffic. Having no cars or trains running on one of the busiest routes in the country on a working day was bound to cause huge disruption to traffic. Despite the many advance warnings, there was some disruption, sometimes lasting more than an hour. The efforts made by or our traffic partners proved invaluable in managing the traffic flow. Rijkswaterstaat (the public works agency), the police, city traffic control, the Amsterdam Amstelland ambulance service and other organisations and businesses (such as Google and Waze) cooperated intensively from their shared base.

Finding a route across the city

The traffic attempting to find a route through the city itself also faced difficulties – together with quite a few residents. There were traffic queues at Cornelis Lelylaan, Hoofddorpplein and on De Boelelaan. Badhoevedorp was put to good use as a short-cut. The Sloterbrug bridge was unable to cope with the pressure. We deactivated the traffic lights and deployed traffic wardens. The rush hour on Friday afternoon was also busy. Or perhaps more accurately: the rush hour on Friday morning segued seamlessly into the evening rush hour. We had problems with drivers who felt the need to use the hard shoulder, threatening to impede the emergency services. A text trailer warning of fines (380 euros) soon sorted the problem.

When the railway deck was placed into its final position... 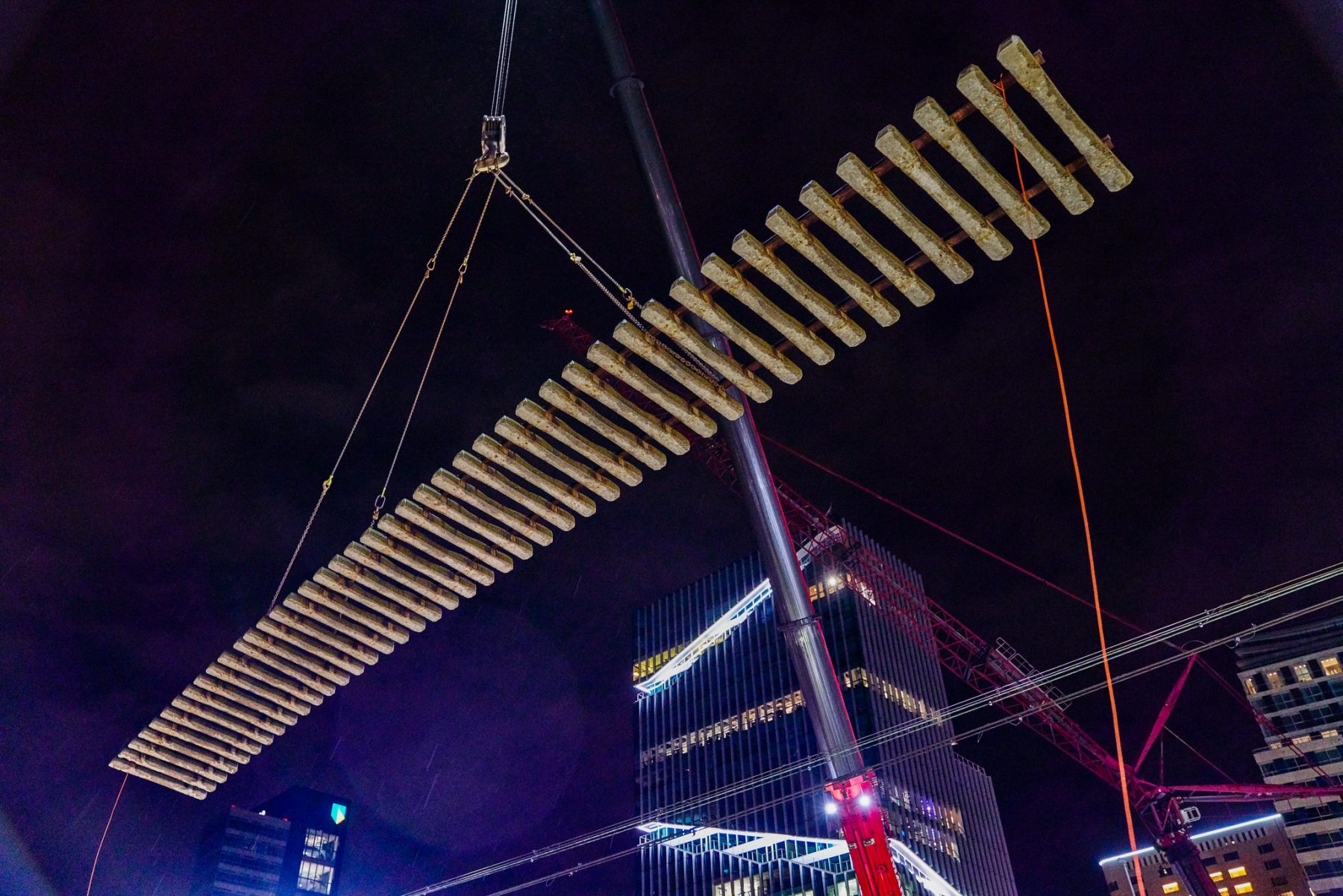 ...the tracks needed to be rebuilt 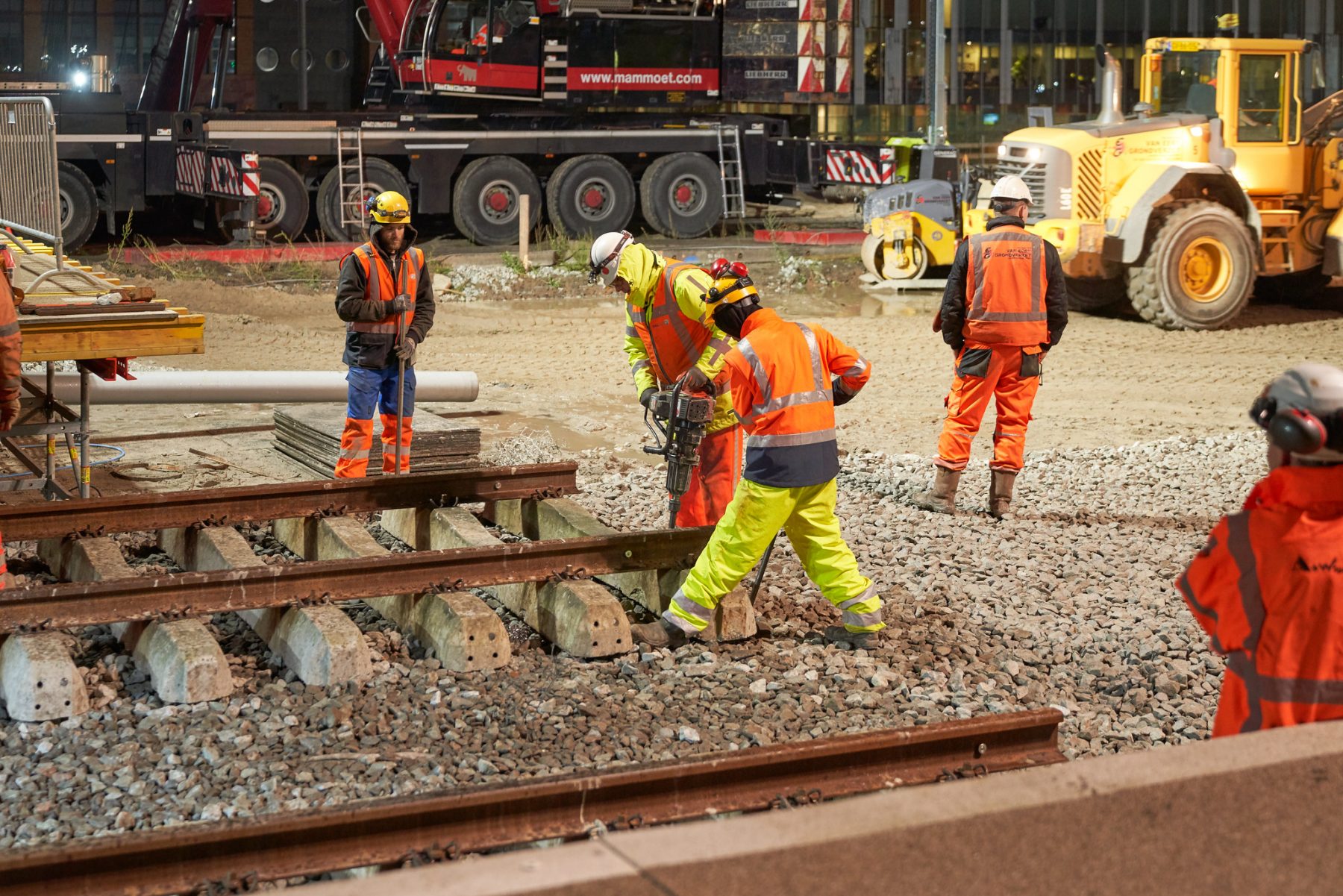 Saturday and Sunday were much quieter. On Saturday, there were no traffic jams until 14.00. On Sunday, there were some congestion at the Badhoevedorp junction and elsewhere, partly because of the bad weather and some minor accidents. In the meantime, work on the construction site went full steam ahead. By the time the roof had arrived in its final position, the site was crawling with trucks filled with sand. We started rebuilding the tracks and platforms to enable the railway to partially reopen on Sunday morning. We missed the scheduled deadline of 06.00 and managed it by 10.00 – with apologies to passengers who arrived at the station in vain. But, in view of the previous delays, things could have been much worse.

...and then it was time for a nice layer of black asphalt
Marcel Steinbach 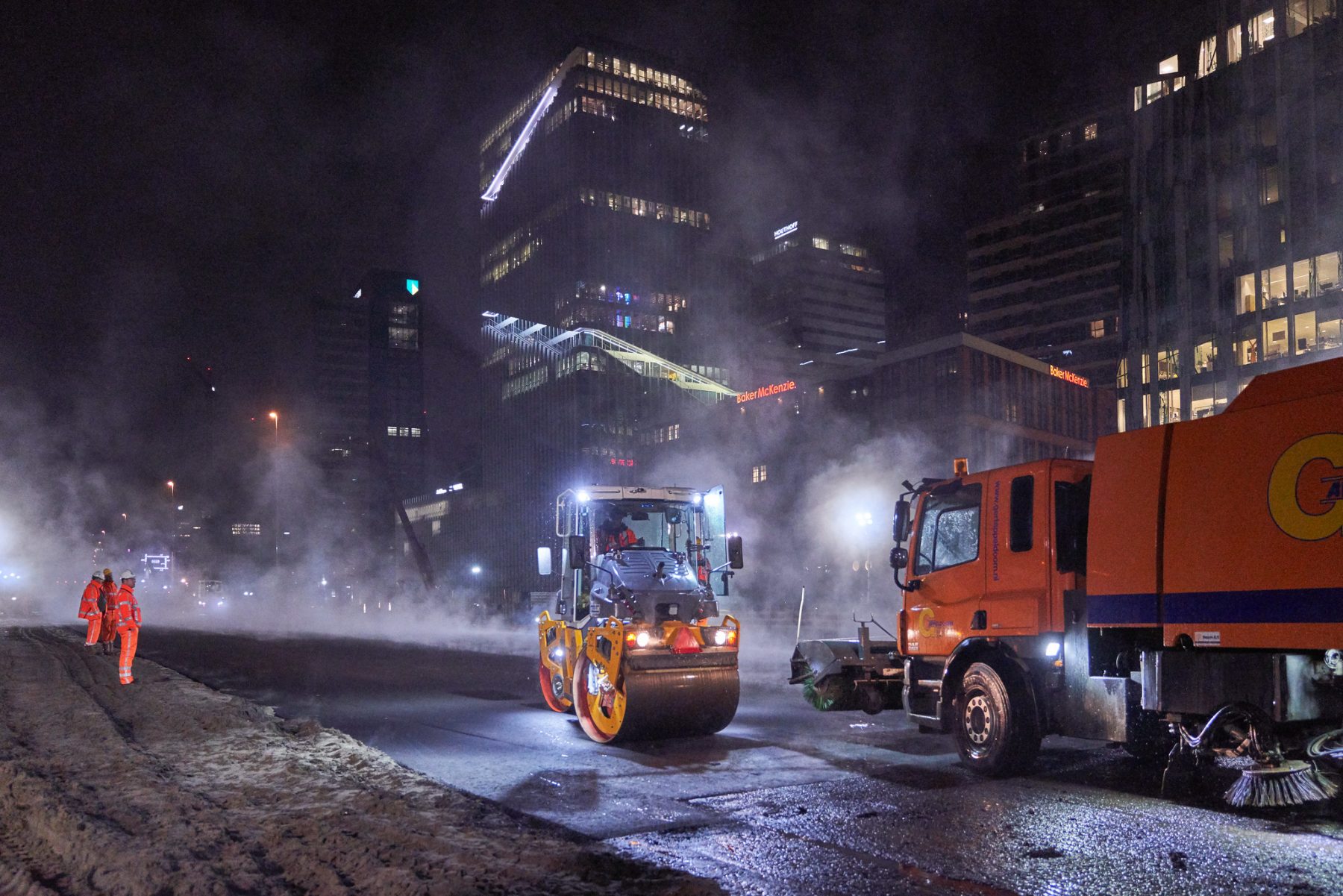 During the rest of Sunday, the A10 was rebuilt layer by layer. In the end, all of the bollards were removed by 3.30 in the afternoon. That was an hour and a half earlier than planned. On Monday morning, the full train service resumed according to schedule. The operation had been a success.