In 1943, a ‘quite difficult boy’ was expelled from the Ignatiuscollege Catholic school for insulting a teacher. That very same boy would ultimately go on to build an alternative for that school: the Sint-Nicolaaslyceum. Two monumental buildings in Zuidas bear testament to these past events. 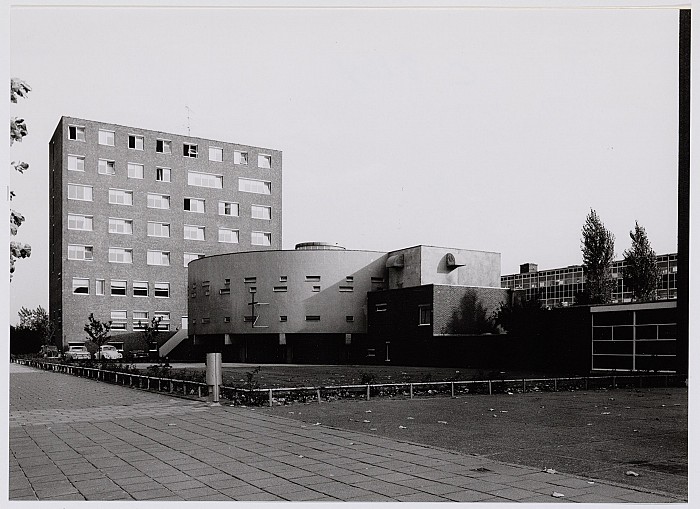 Until the mid-1950s, Amsterdam had just a single Catholic high school for boys – the St. Ignatiuscollege – and one for girls – the Fons Vitae Lyceum. They were popular with Catholics from Amsterdam and beyond, but there wasn’t room for everyone. ‘Some Catholic boys were rejected’, explains former pupil Ted Peters, ‘for example because they were the sons of gardeners from the north of Amsterdam. They were not allowed at the Ignatius.’ There were also pupils, like Ted Peters himself, who were allowed to go to the school, but went on to make a nuisance of themselves. He was that ‘quite difficult boy’, partly because, in 1943, he insulted a teacher of German. ‘That kind of thing is now resolved differently’, he says, ‘but it went down very badly at the time.’ 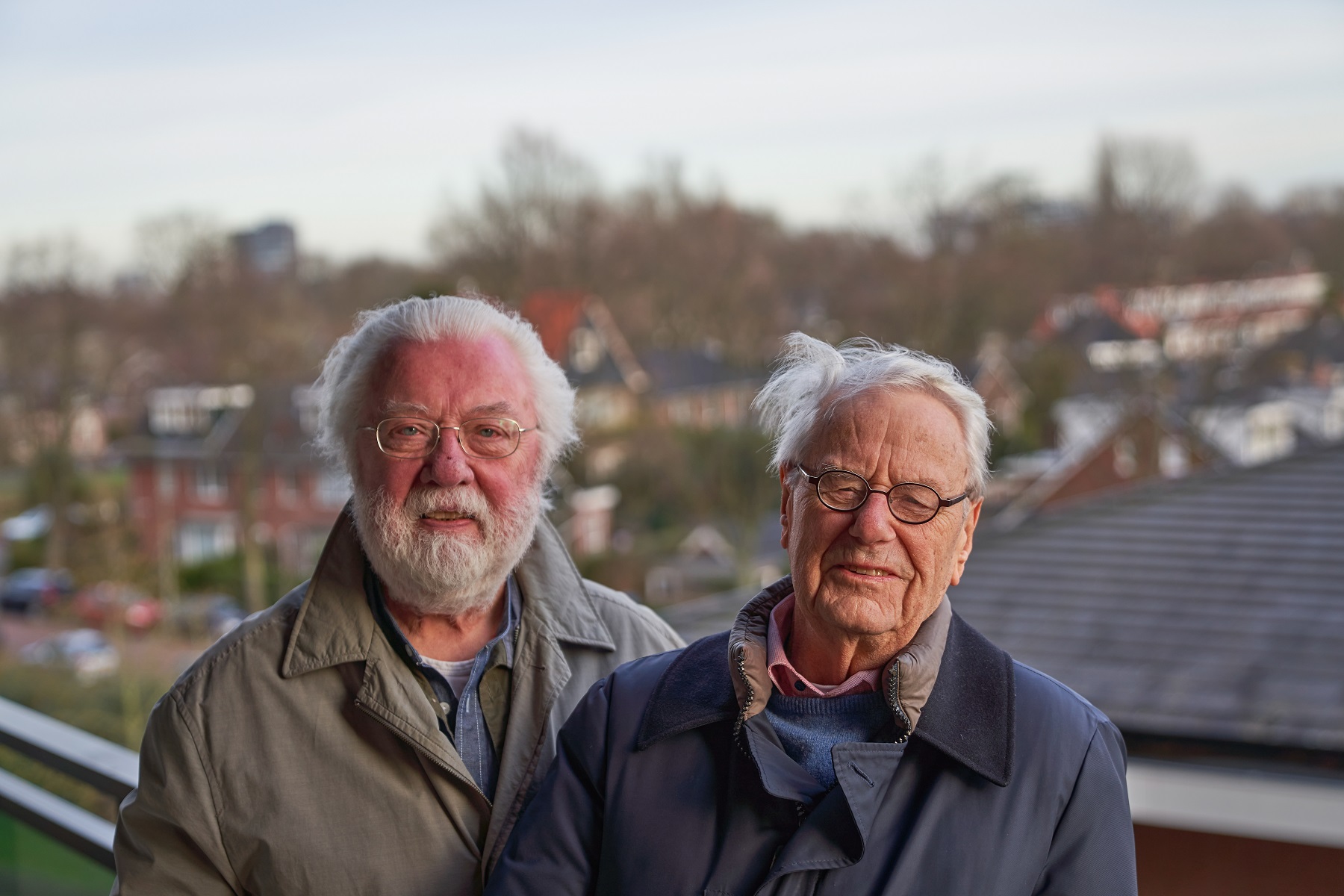 Five years later, in 1948, the Sint-Nicolaaslyceum was founded in order to meet the growing demand for Catholic education. For this, the new school used temporary locations, first in Spaarndammerbuurt and later in Da Costastraat. But the classes continued to burst at the seams and there were increasing calls for a designated building. It was then that the ‘Congregation of the Priests of the Sacred Heart of Jesus’ made a smart investment: for an unknown amount, it purchased some land from several gardeners on the south-west side of what is now Beatrixpark. In doing so, the congregation was anticipating the General Expansion Plan (Algemeen Uitbreidingsplan), that would see Amsterdam’s city boundaries significantly expand in the post-war period. A new school for the new district would ultimately prove useful for the growing Catholic community.

The lyceum in 1969
Stadsarchief Amsterdam 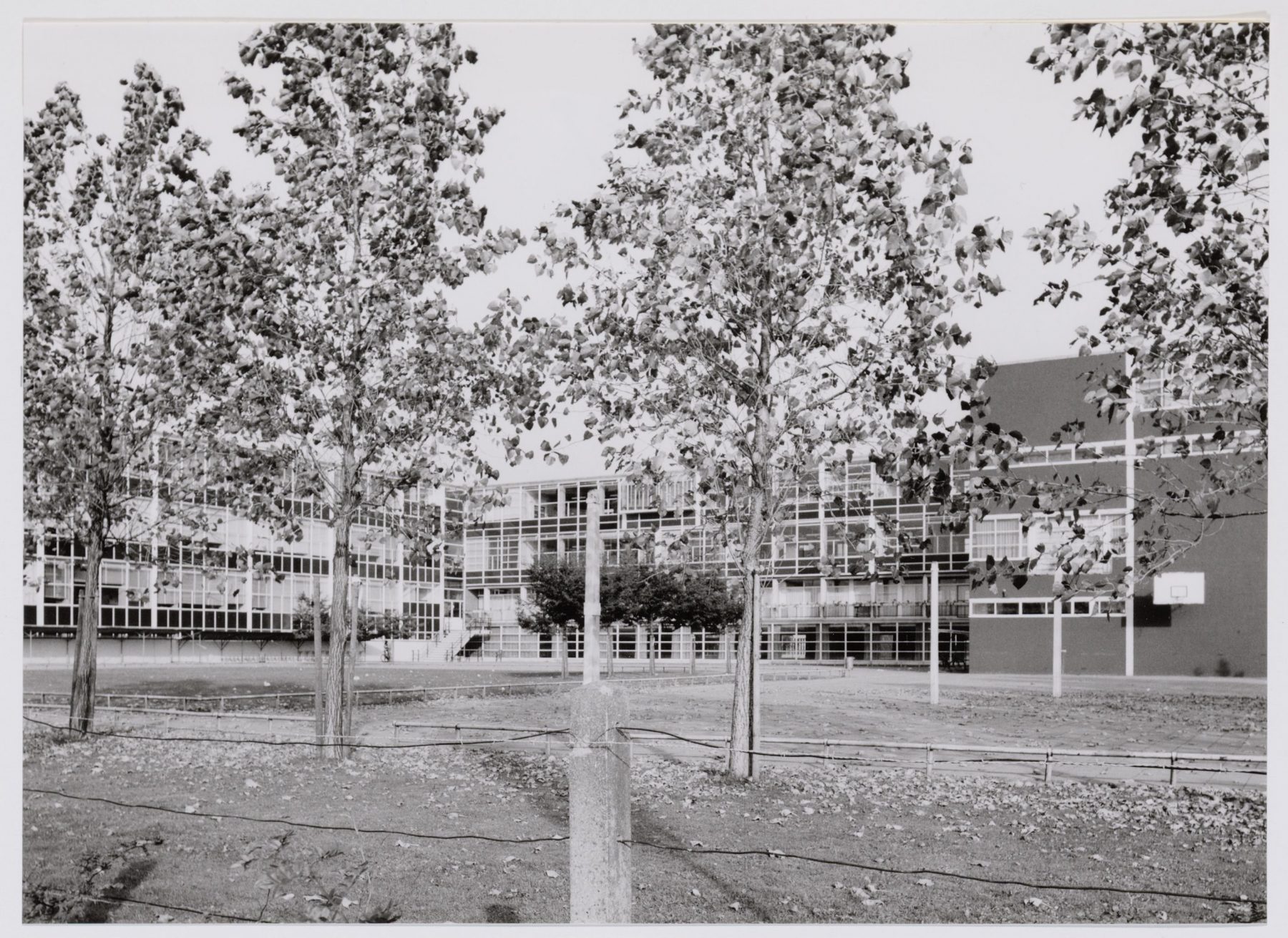 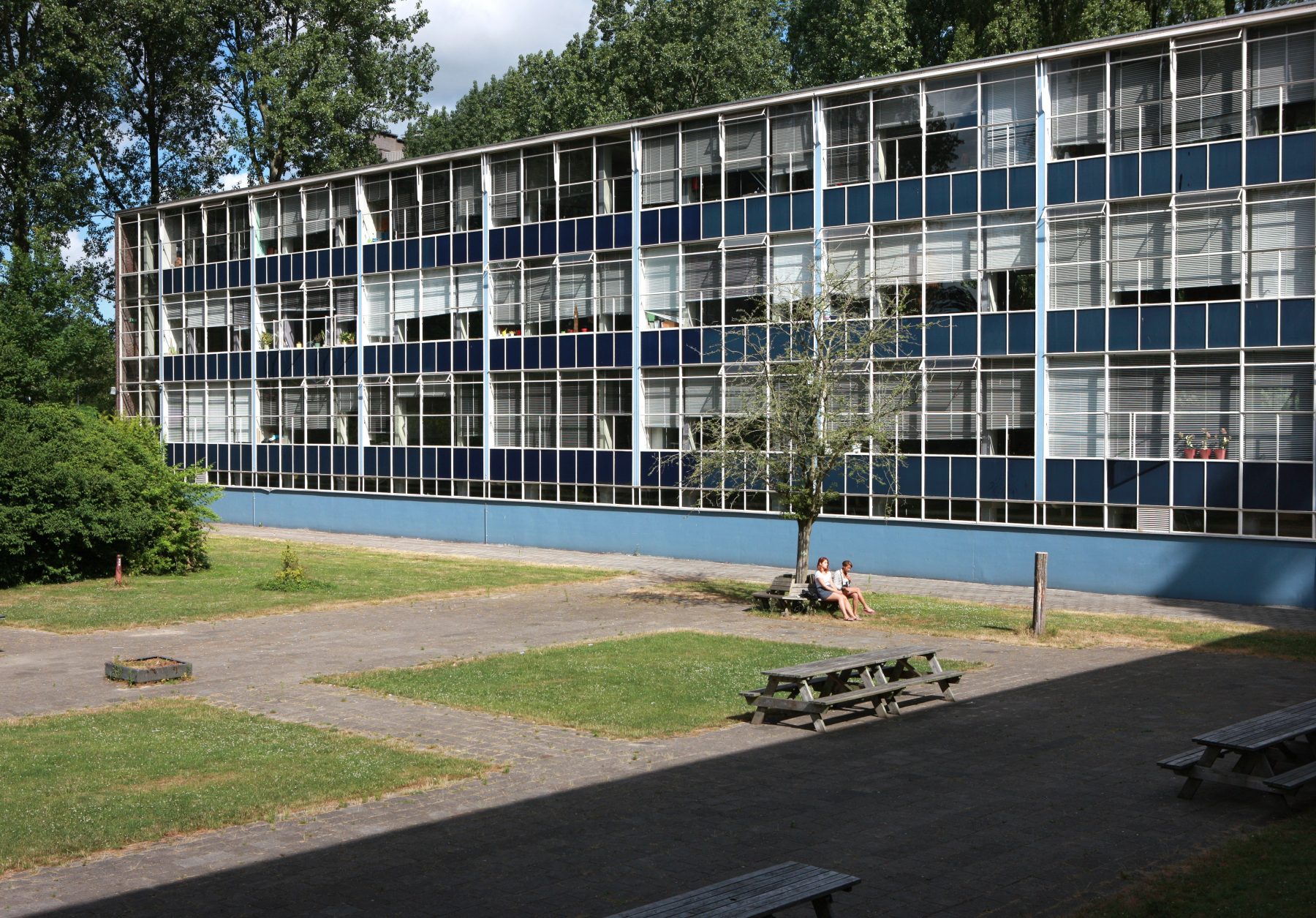 While the first lessons were taught in emergency classrooms starting in 1954, construction began on a new school building in 1956. In those days of denominational segregation (or ‘pillarization’) in Dutch society, the commission for the building’s design had to go to a Catholic architect. Since he was known to the congregation, all eyes turned to Lau Peters. Unfortunately, his proposal was rejected by the planning committee. His son Ted, at that time studying at the Amsterdam Academy of Architecture and working with future city architect Merkelbach, was put forward to save the project. Although he had never before designed a whole building, when his boss said ‘you can do this’, he took on the challenge. The brief: a school building, a chapel and a monastery.

Demolition of the lyceum in 2013
Stadsarchief Amsterdam 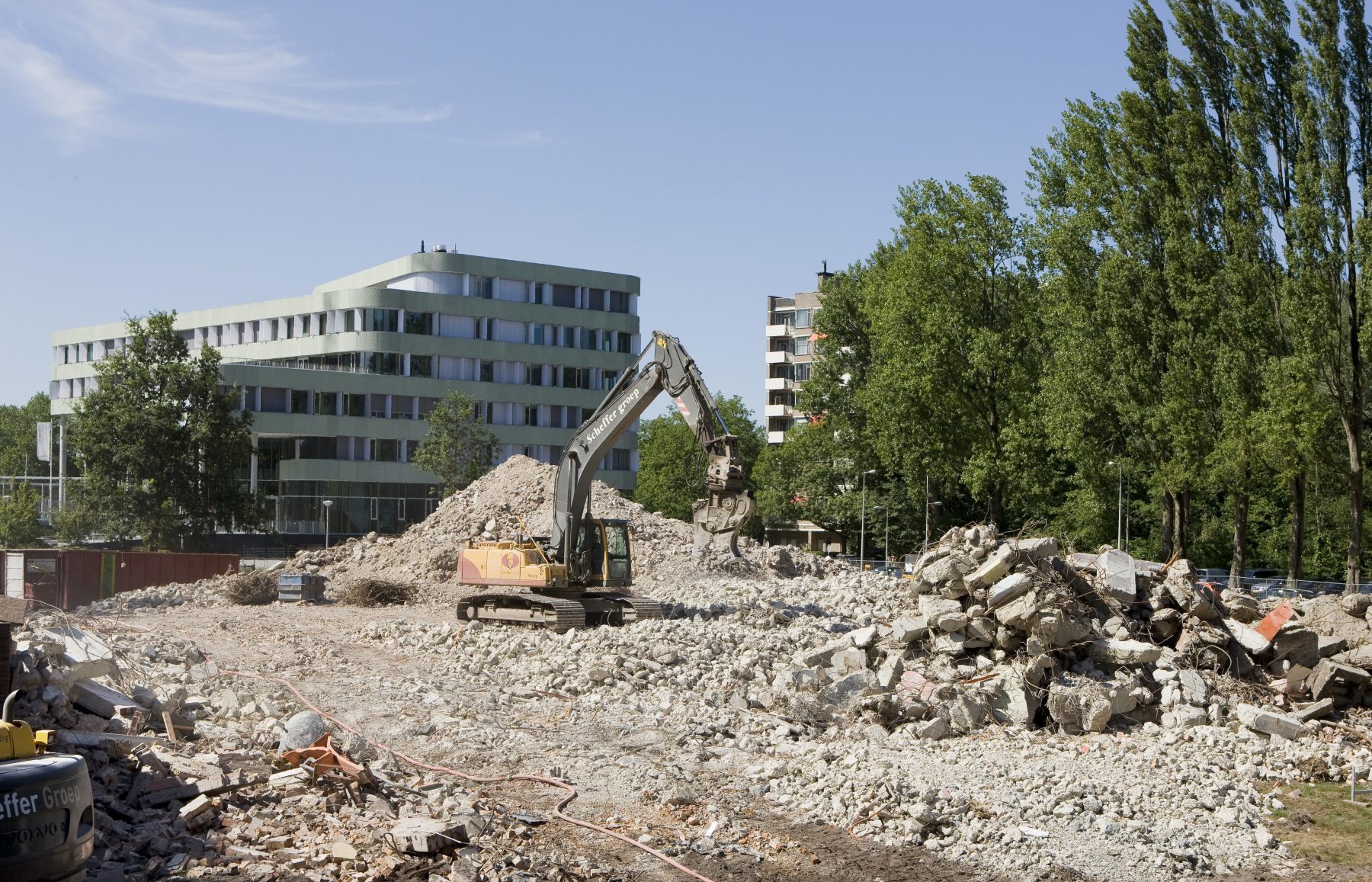 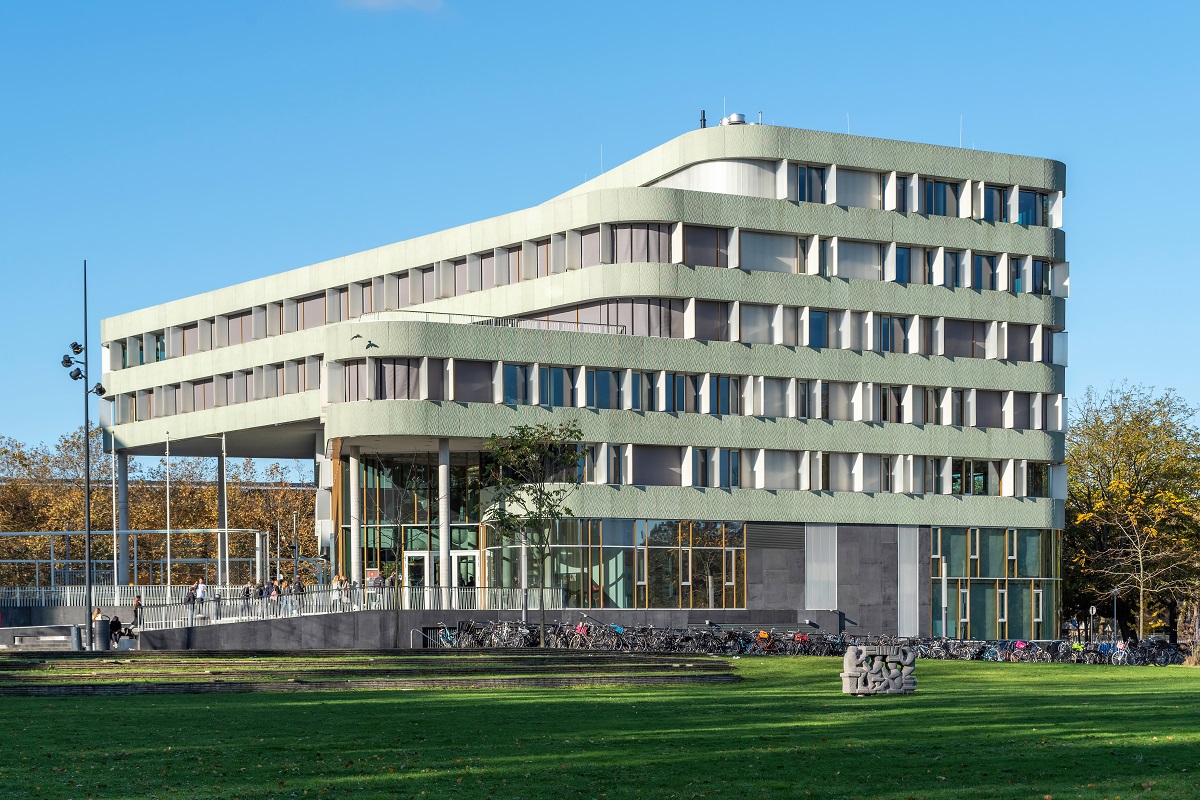 Anyone cycling into Beatrixpark from Prinses Irenestraat will see very little remaining of that original design brief. Partly because the school building has since been demolished, but probably also because the chapel and the monastery – Peters felt that the name ‘convict’ was particularly inappropriate – that still exist look very different from monasteries and chapels as we know them. The chapel is circular and the monastery quite tall. This is one of the reasons why the buildings have had monument status since 2015. This is the only example of a high-rise monastery in the Netherlands. If you asked the architect why, his firm response is ‘I don’t know!’ But ultimately, as it turns out, there is an explanation. The monastery tower, in which clerics of differing ranks lived in varying degrees of luxury, marked a break from the flatness of the school building. The circular chapel was above all ‘fun! You didn’t sit at the front or back of the church, but in a circle together.’ These were the kinds of ideas that formed the basis for Peters’ work on the site, together with his friend and fellow architect Ben Spängberg. Their ideas were inspired by impulse, combined with a healthy dose of revenge aimed at Peters’ former school. ‘In terms of prestige, the Nicolaaslyceum was not quite in the same league as the Ignatius. I was always aware of that and that’s why I really put my all into it.’ This did not go unnoticed, and both the planning committee and the Superior General were soon satisfied. 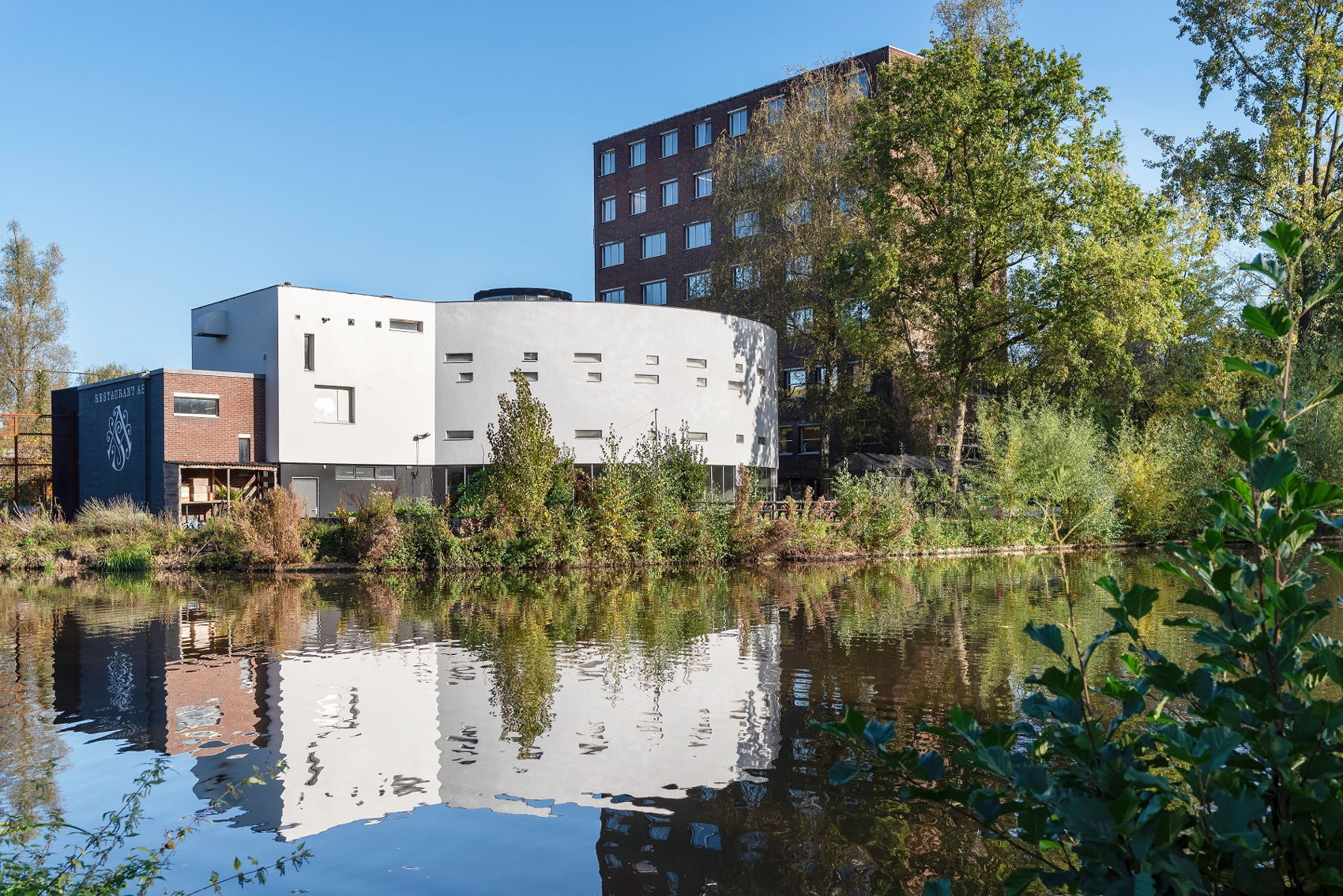 Initially, there was only a boys’ school, but the girls from Sint Pius also moved into a building of their own in 1961. The boys’ building is between the chapel and Beethovenstraat and the girls were taught on the southern side of the monastery. As already stated, there is no longer anything to be seen of these school buildings. As the years went by, they became increasingly less fit for purpose in meeting the requirements of a modern school. Just like the Rietveld Academie, it was a poorly insulated building. According to architect Peters, it was no longer a suitable place in which to educate young people. In 2012, a new school building was erected in Beethovenstraat, on the site of the Christus Geboortekerk church, which had been demolished. The monks left in 1998. 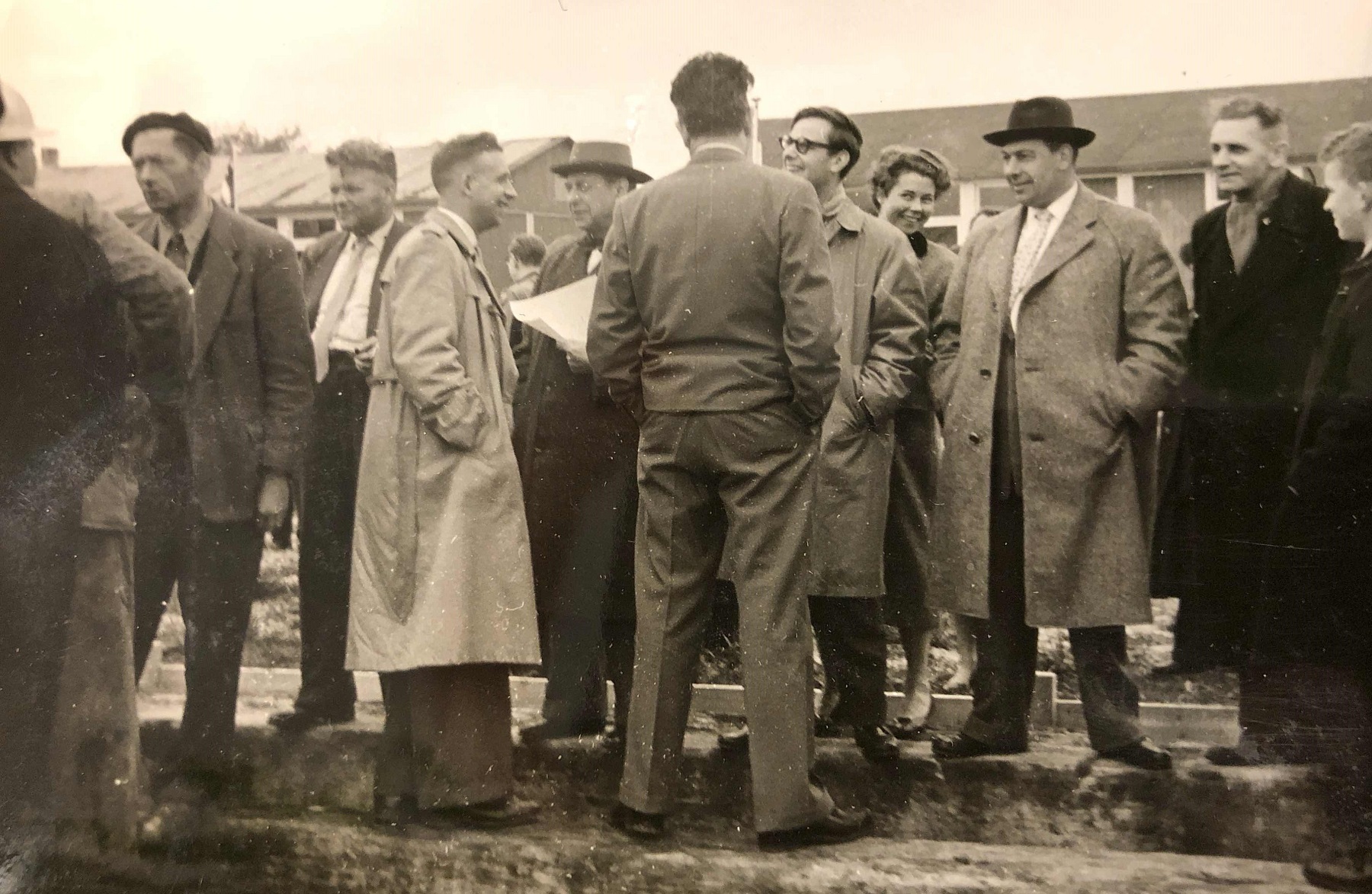 Since that time, the buildings have served several different uses. Kapel & Convict – ‘definitely a chapel and a monastery’, according to Peters – have been used as offices, restaurant As, the Design Museum and the Sandberg Instituut. But the building was not always treated with care. The makeshift fire escape is hardly attractive and the altar from the chapel ended up on the scrapheap. But there now lies a new and better future in store for it. After its renovation, students and instructors from the Conservatorium van Amsterdam will be moving into the municipal monument. Peters himself has been delighted to be involved in this from a distance, and is sure it is the right move. He has confidence in the plans and the way in which his and Ben Spängberg’s ‘life’s work’ is being treated. As a result, a piece of Catholic history has been preserved, built on a cleverly-acquired plot of peat land and all thanks to a healthy dose of self-assertion from quite a difficult boy. This is the ninth in a series about national and municipal monuments in and around Zuidas. The first was on the subject of the Thomaskerk. The second was about the old courthouse. The third was about the Europahal. The fourth about the Burgerweeshuis. The fifth about the Rietveld Academie. The sixth about the Buitenveldert cemetery. The seventh about Tripolis. The eighth was about the Warnersblokken apartments.

It started with a factory in Zevenaar, where art was introduced to prevent ‘a girl having to continually endure the same view’, followed by an office building in what is now Zuidas, that aimed to ‘offer a meaningful environment for people to work in’. That’s the history of the Turmac building, now a municipal monument.
wonen-en
May 26, 2021

The monumental Princesseflat and its tormented architect

‘No solution to gross profiteering’ rang the headline in the 'Het Vrije Volk' newspaper in 1963. Below, it read: ‘Apartment worth 50,000 guilders on the market for 150,000’. The report will certainly not have been the best of news for the man who had an office just above the garages next to the apartment complex.
wonen-en
April 20, 2021

The Warnersblokken apartments will be familiar to anyone who cycles through the Prinses Irenebuurt. They are the four eye-catching and colourful housing blocks at the end of Fred. Roeskestraat. In order to properly understand this national monument, we need to look to another neighbourhood of Amsterdam, Slotermeer.
More posts