This week, the trees were hoisted up onto the roof gardens on Terrace Tower. The additional greenery will make Zuidas more attractive to new businesses, boosting the City Council’s ambition to make the area more sustainable and greener. 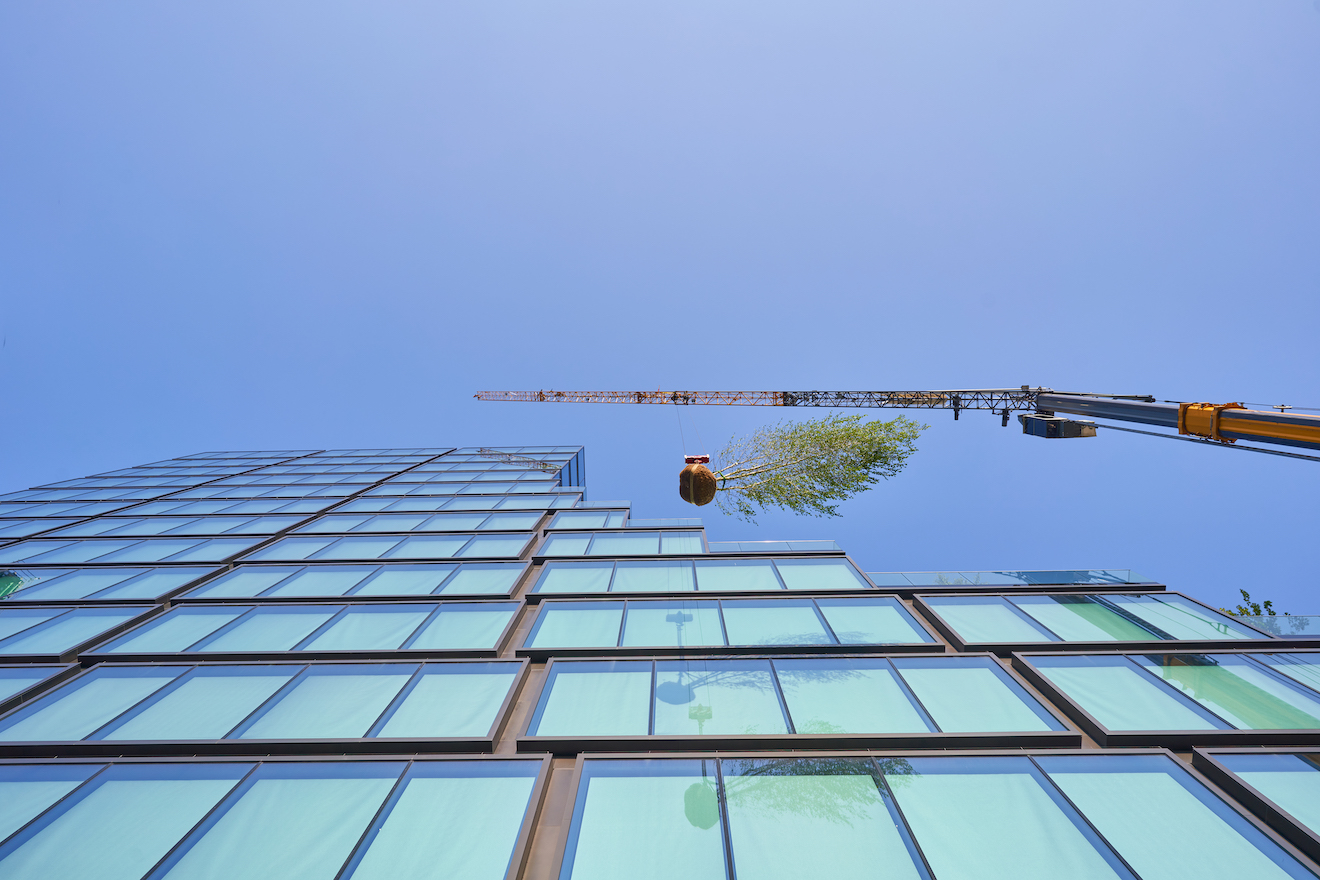 During a hot summer’s day, the users of Terrace Tower will soon be able to go outside to cool off in the shade of a birch tree or ornamental cherry. They won’t even need to take the lift downstairs, because their offices will blend almost seamlessly into a green and varied roof terrace. Close to the door, the floor is still made of stone and just a few metres away, it transforms into a green carpet with planters and Amelanchier shrubs. On the edge of the roof, there are even some complete trees, including evergreen pine trees. Users of the higher floors will soon enjoy a spectacular view of a panoramic terraced landscape: the roof gardens of the lower floors, which tier outwards like drawers, and can be quickly reached by means of a staircase. On sunny days, people will be able to enjoy lunch outdoors in a specially landscaped garden under the trees. 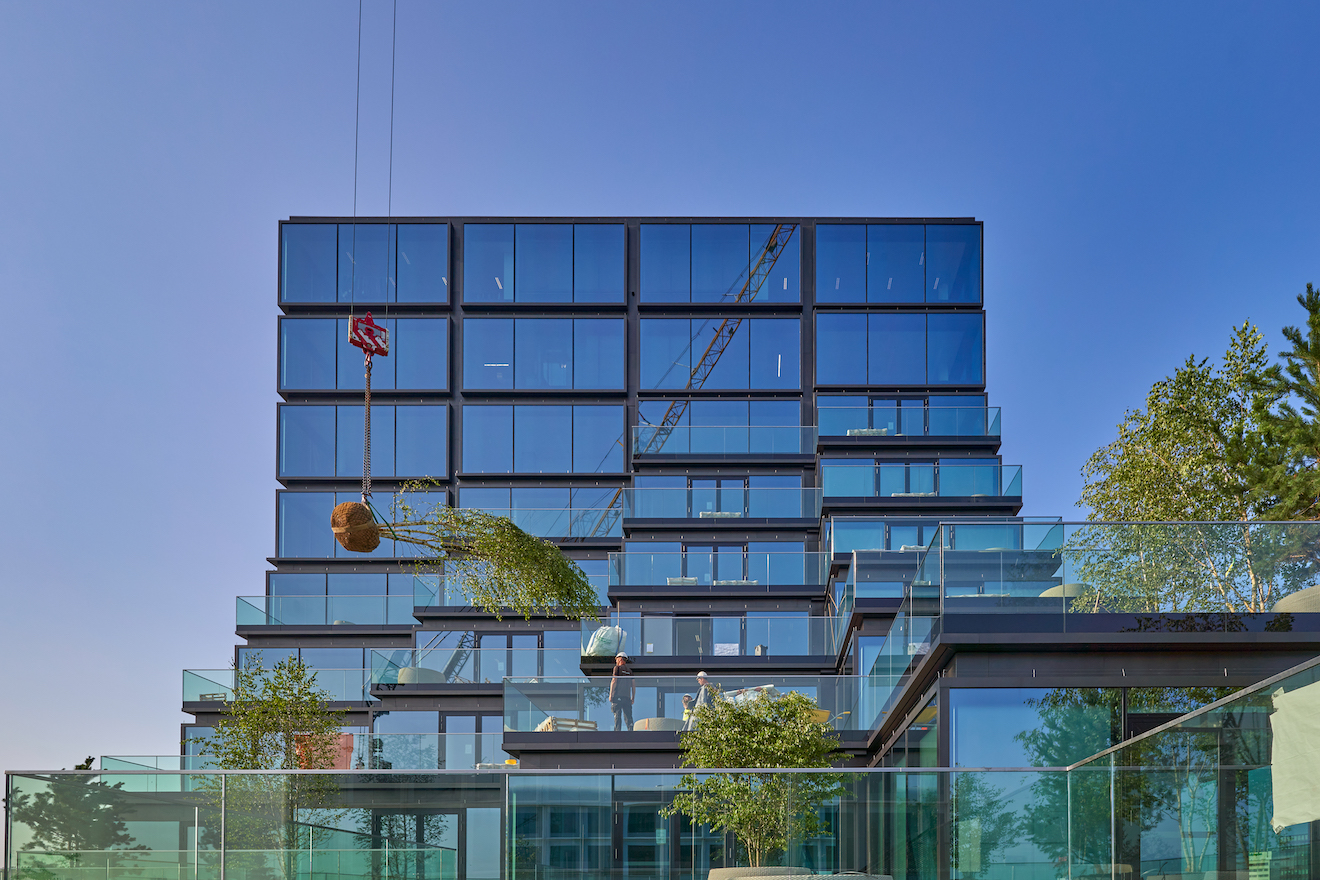 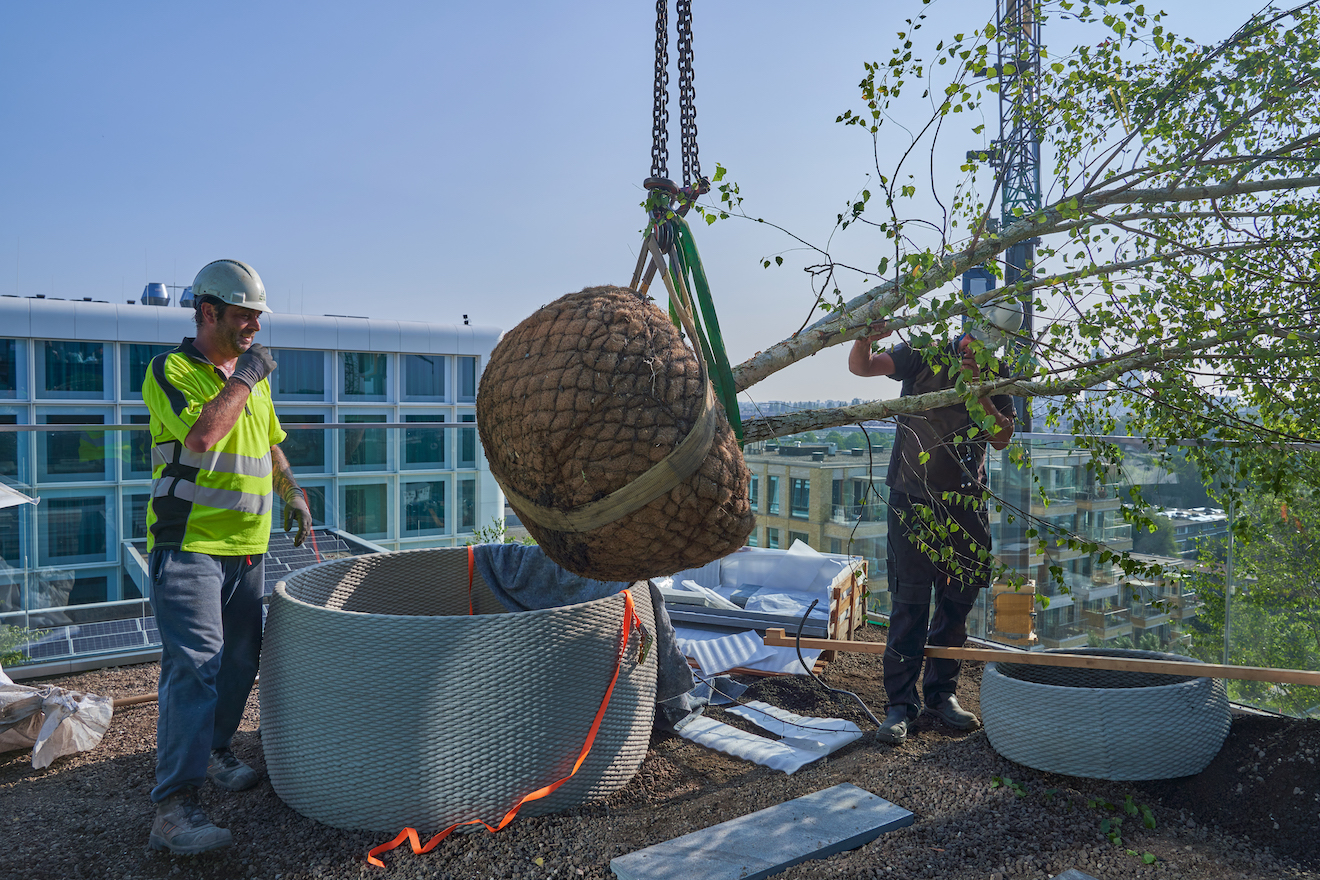 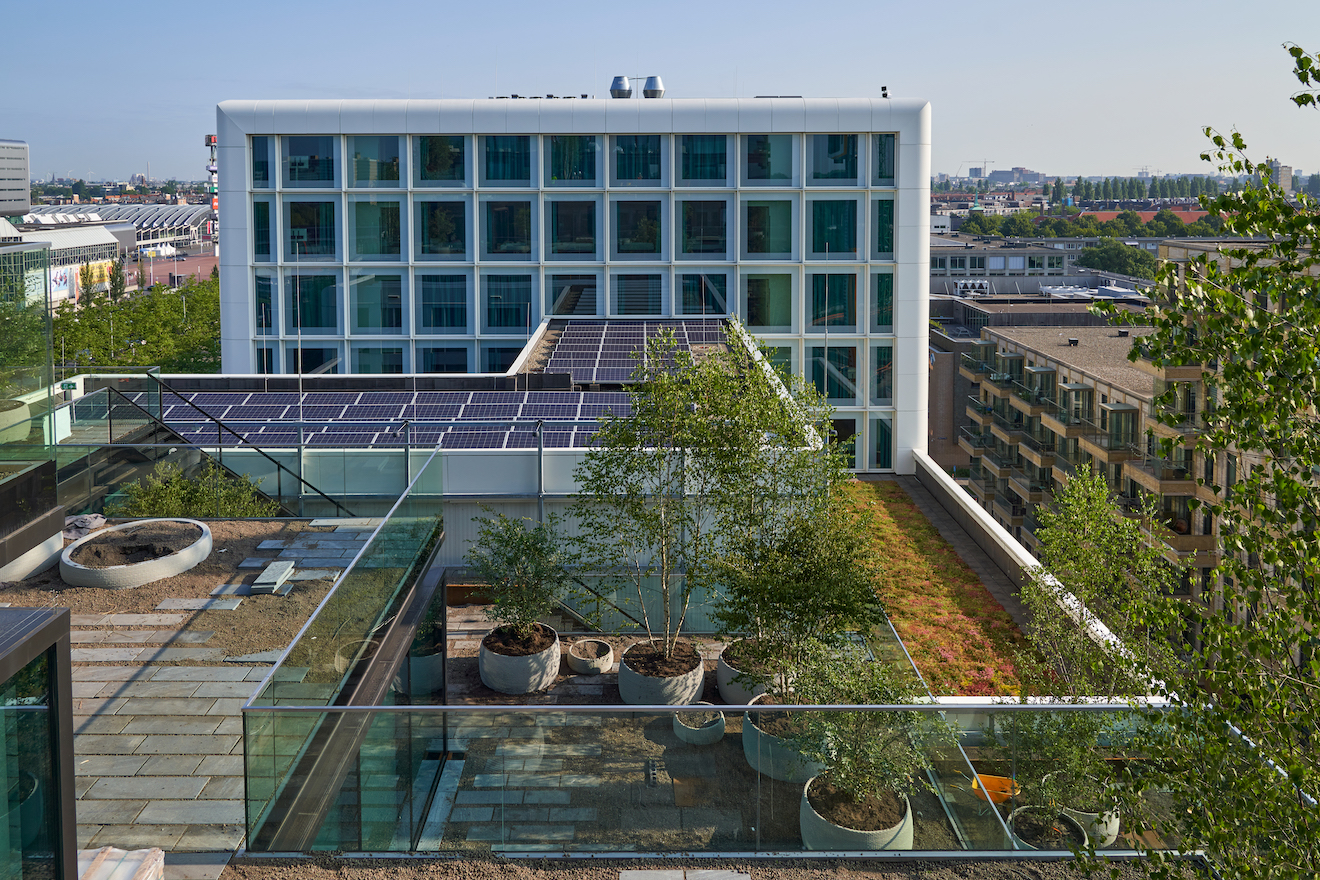 More pleasure from work and well-being

Although it is not yet complete, landscape architect Steven Delva, responsible with his team at DELVA Landscape Architecture for the design and landscaping of the Terrace Towers roof gardens, can already picture the scene. Together we watch as the gigantic cranes hoist the first trees and plants to the top. According to Delva, the roof gardens not only make the building look different from standard office complexes, the added greenery also boosts pleasure at work and well-being for the people employed in it. That has significant value, suspects Delva, because the construction and operation of this kind of office building are ultimately driven by economics. All of the plants cost money and the greenery takes up valuable space.

Installing a roof garden on an office building is not just an afterthought, done when a building is already there. Anyone who’s watched an action movie featuring a chase scene across the roofs of a city or an industrial estate will know that the tops of buildings are usually quite a mess. In the past, roofs were filled with air-conditioning units and ventilation pipes and now they have heat pumps and solar panels. This means that landscape architects need to have good arguments to convince commissioning authorities and architects to place these systems inside the building instead of on top of it, eating into lettable square metres. Or to adjust the roof structure to enable it to bear the weight of soil, plants and – after heavy rainfall – large amounts of water. Together with its root ball, just a single tree can weigh as much as 500 kg. A day of heavy rain can also quickly deposit 40 litres of water per square metre of roof. At Terrace Tower the argument obviously worked: the combination of greenery and water storage means that this will be a climate-adaptive office complex.

Delva has no shortage of arguments, as he reveals when you ask him. One of these is aesthetic: instead of a dull and grey box with no opportunity to go outside, an eye-catching building featuring green outdoor space creates a young and fresh look and feel. This is exactly what companies wishing to set up business in Zuidas are looking for. There are plenty of companies like this, as confirmed by the Financieel Dagblad newspaper, which recently noted that Zuidas will need to become friendlier, more diverse and greener if it is to remain attractive to ‘techies’ and other up-and-coming talent. According to the article’s author, Zuidas is transforming from an ‘intimidating office cathedral’ into a ‘rooftop woodland’. Delva also sees the same thing reflected in his own architectural practice: less marble and more greenery, on an increasingly larger scale. In the wake of the eye-catching green spots on Valley, larger greener areas or ‘garden rooms’ are now appearing on Terrace Tower and these will soon be followed by a complete woodland that is set to be planted between two towers of the De Puls building. Increasing densification, as Delva sees the construction work in Zuidas, always needs to go hand in hand with more greenery and greater sustainability.

Amsterdam City Council would certainly agree with that. Anyone browsing through its ‘Plan for a green Zuidas’ (Plan voor een groene Zuidas) will see inspirational panoramas, countless maps featuring ecological structures and green environments and ambitious plans for planting trees and developing rooftop gardens. Delva is working according to this green plan and sums it up in a few words. The ultimate aim, he says, is to connect the woodlands of Amsterdamse Bos with Amstelpark by means of a series of wide, green tracks. Whereas Zuidas is currently a checkerboard of separate, green areas, it will soon be a widely branched network of blue and green connections, where birds breed, roost and feed and where people live and work in pleasant conditions. Not only do Beatrixpark and Kleine Wetering have an important role to play in that, but so do the railway verges, the new dock, the avenues and squares lined with trees and the numerous rooftop gardens. And, of course, the Terrace Tower roof gardens. Currently this remains a green island, but it may soon be one of the many links in the ecological corridor connecting Zorgvlied and Beatrixpark.

28 September: walking and talking about a greener Verdi

The residents of Verdi, the westernmost neighbourhood of Zuidas, have heard a lot of talk about a greener Verdi. What exactly we mean by that is outlined in the Verdi Green Plan (‘Groenplan Verdi’). On 28 September 2021, we will be telling you all about it during a walk. Would you like to join us and take part in the conversation?
reizen-en
werken-en
August 9, 2021

Do you work in Zuidas and are you planning to work at the office more often after the summer holidays? And would you like to change your commuting habits so you don't end up sitting in traffic every day? Then why not try the third Zuidas Mobility Experience?
wonen-en
werken-en
August 2, 2021

Anyone looking east beyond Gustav Mahlerlaan will see a trench, 10 m wide and 5 m deep, running alongside Valley. It is a new link in the planned loop system around Zuidas. ‘We’ll be creating some lasagne here.’
More posts