Amsterdam Zuid station is set to have new metro platforms, between the existing passageway and the new passageway currently under construction. We will need to make space for them. So, how will this be done and how will it affect passengers and local residents? 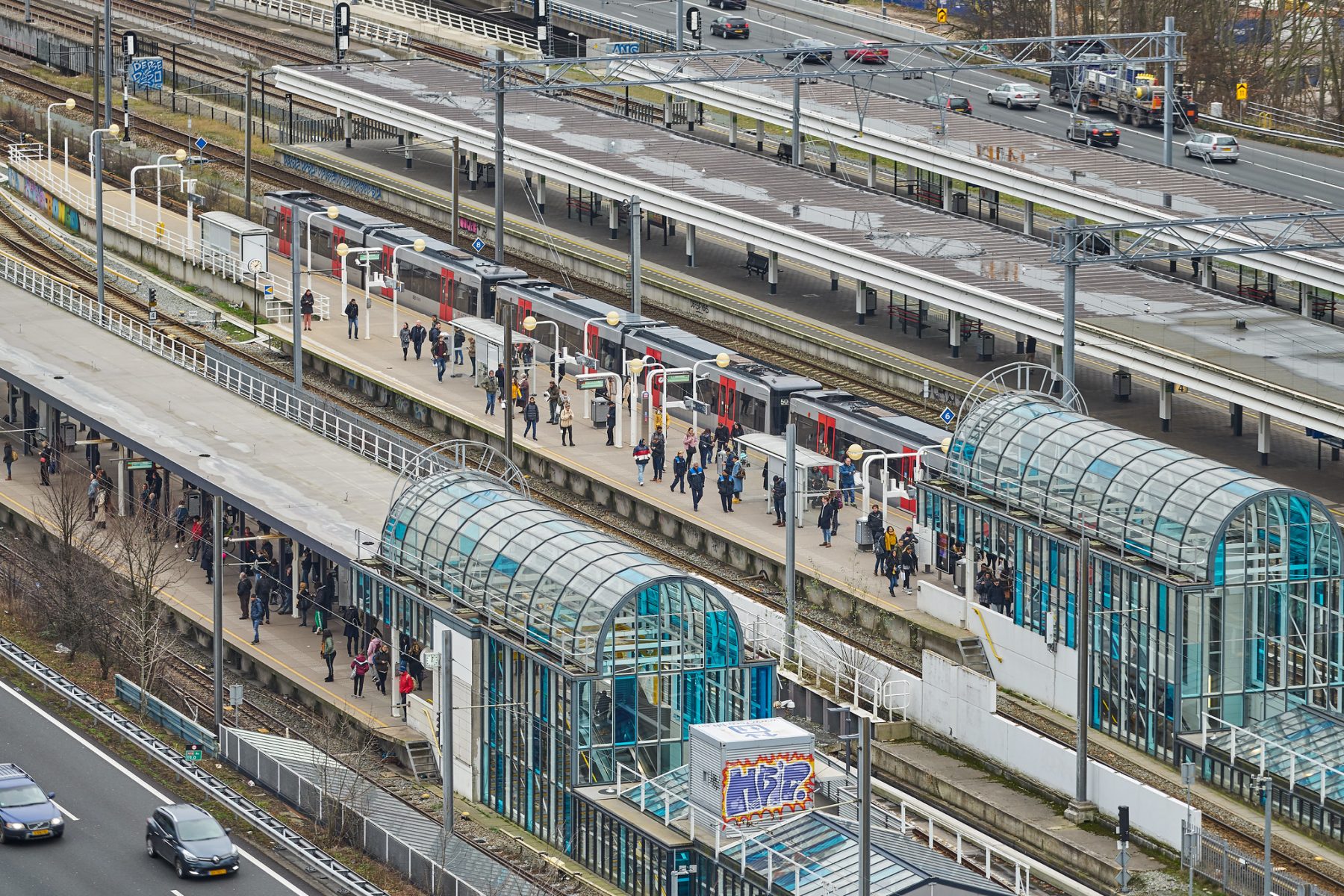 It will be a familiar sight not only to train passengers at Amsterdam Zuid station, but also metro users: people crowding around the stairs and escalators to reach the passageway from the platforms and vice-versa. This is all set to change in the years ahead. Alongside the Minervapassage (which we are widening), we are currently in the process of building the Brittenpassage, which will be at the end of Benjamin Brittenstraat. The metro platforms are currently on the eastern side of the Minervapassage, but will be soon on the western side, right between the Minervapassage and the Brittenpassage. Where these new platforms will be, we are also building sections of the roof for the new Brittenpassage and widened Minervapassage. There is just one problem with that: there is currently a connecting track for metro line 52 (North/South line) in exactly the same place. This is needed to enable metro trains to be returned to the rail yard in Diemen when the service ends. 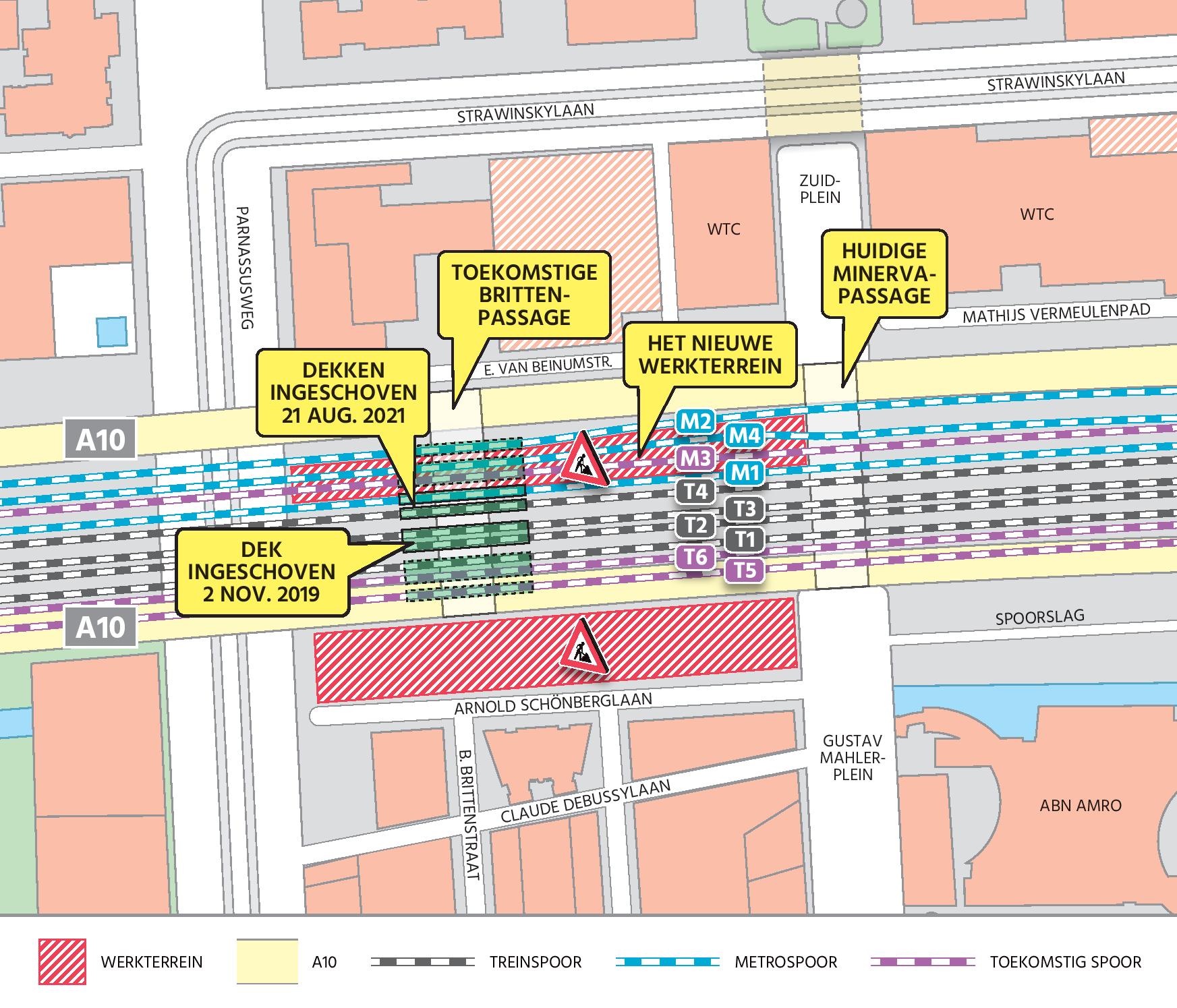 In order to create space to build the new platforms and passageways, we will be making changes to the existing metro tracks. To make it possible to reach the rail yard, some distance away, we will be installing five new switches on the eastern side of the station: two past Amsterdam RAI station and three between Amsterdam RAI station and Beethovenstraat. This will enable the North/South line to switch to the metro line 50 track there. As a result, at the end of his or her service, a driver of a North/South metro will first stop at Amsterdam Zuid station to allow passengers to get off, before reversing a little to switch tracks and then continuing towards the station to travel to the rail yard on the other track. We will be installing the switches over four weekends in November and December 2021.

This is not the only action we are taking to create more space. In order to widen the Minervapassage, we also need to build new sections of roof for it. This will only be possible if we make the North/South line terminate slightly further east (towards Beethovenstraat) for several years. Part of the platform and track are currently above the Minervapassage and that space will be needed. The work will start in the spring of 2022.

How will it affect you?

Metro services will be reduced while the new switches are being installed. This will happen in the weekends of 13-15 November, 27-29 November, 4-6 December and 18-20 December. During the work, only one track will be available for each metro line, rather than the usual two. The GVB will schedule extra buses in the weekend of 13-15 November. At night, one lane on the A10 may also be closed to enable trucks to lift components into position. In the summer of next year, we expect further disruption for passengers. We will provide more details soon.

Three roof sections are now in place under the tracks for the new pedestrian passageway at Amsterdam Zuid station. The construction sites look neat and tidy, but appearances can be deceptive. By popular request, here is a preview of the next phases of the work.
wonen-en
reizen-en
werken-en
August 26, 2021

Last weekend (21-22 August 2021), we took a major step in the construction of the second pedestrian passageway underneath Amsterdam Zuid station. The work involved installing two enormous concrete roof sections into place for the new passageway. Everything went like clockwork.
More posts