They were shunned and unknown during their own lifetimes, but now the names of female composers will add some diversity to the streets of Zuidas. ‘They died sad and lonely – and that’s why now, after all these years, we have to honour their work.’ 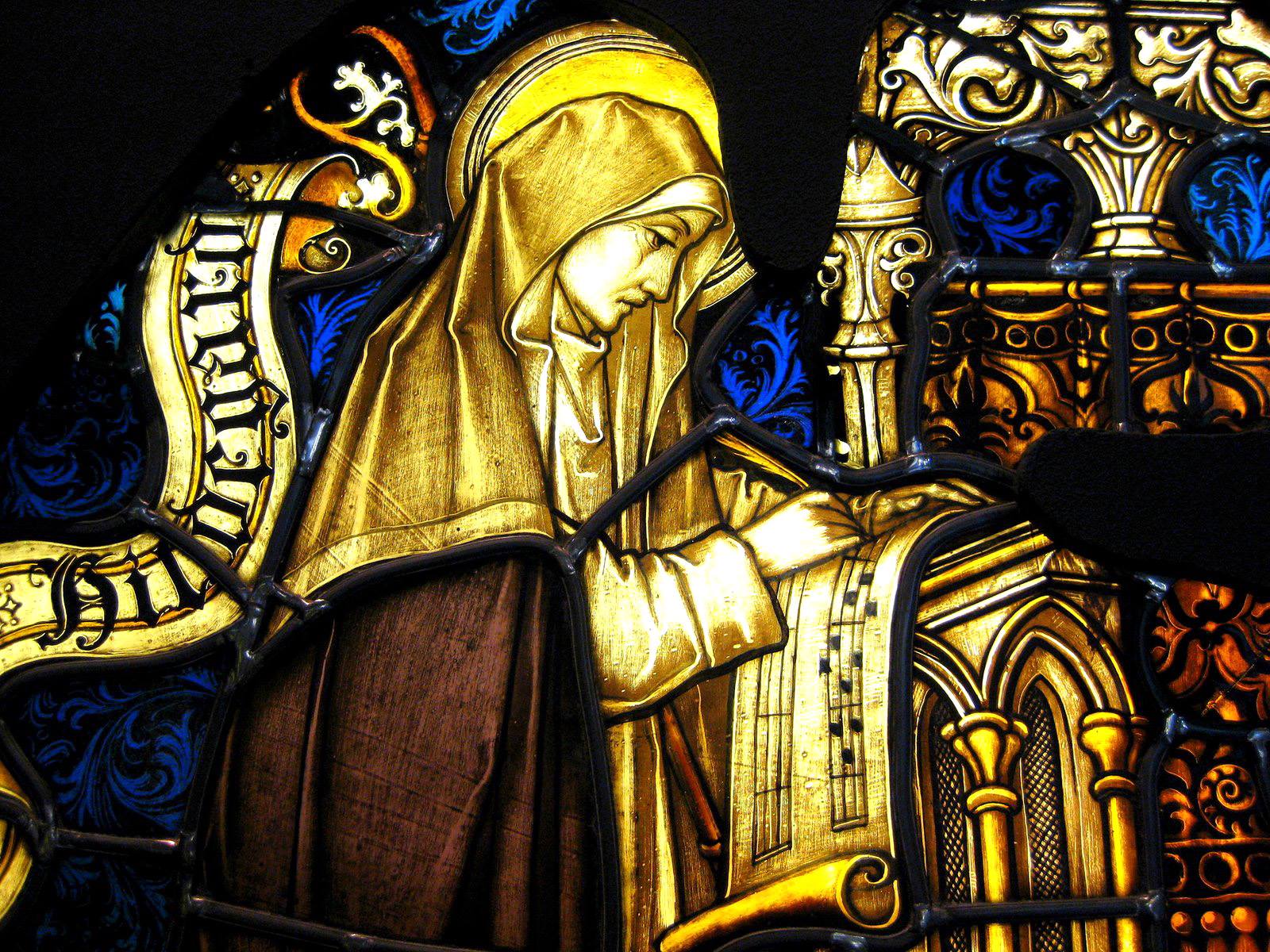 Hildegard von Bingen, Jaddanbai, Florence Price, Margaret Bonds and Fanny Mendelssohn. These are the names that will be honoured in the streets and public spaces of the new Kenniskwartier district. This was the decision made by the Mayor and Municipal Executive of Amsterdam on Wednesday 14 December 2021. The Kenniskwartier is located between the A10 motorway (south section), Buitenveldertselaan/Parnassusweg, Arent Janszoonstraat and Amstelveenseweg. ‘Clara Schumannstraat’ was opened a few years ago in the north of the area, and so she became the first female composer to have a street in Zuidas named after her. In another Zuidas neighbourhood, Vivaldi, the ‘Francesca Caccinipad’ was opened in December 2021, named after the Italian composer, singer and poet (1587-1641).

The Francesca Caccinipad was opened in Zuidas in mid-December 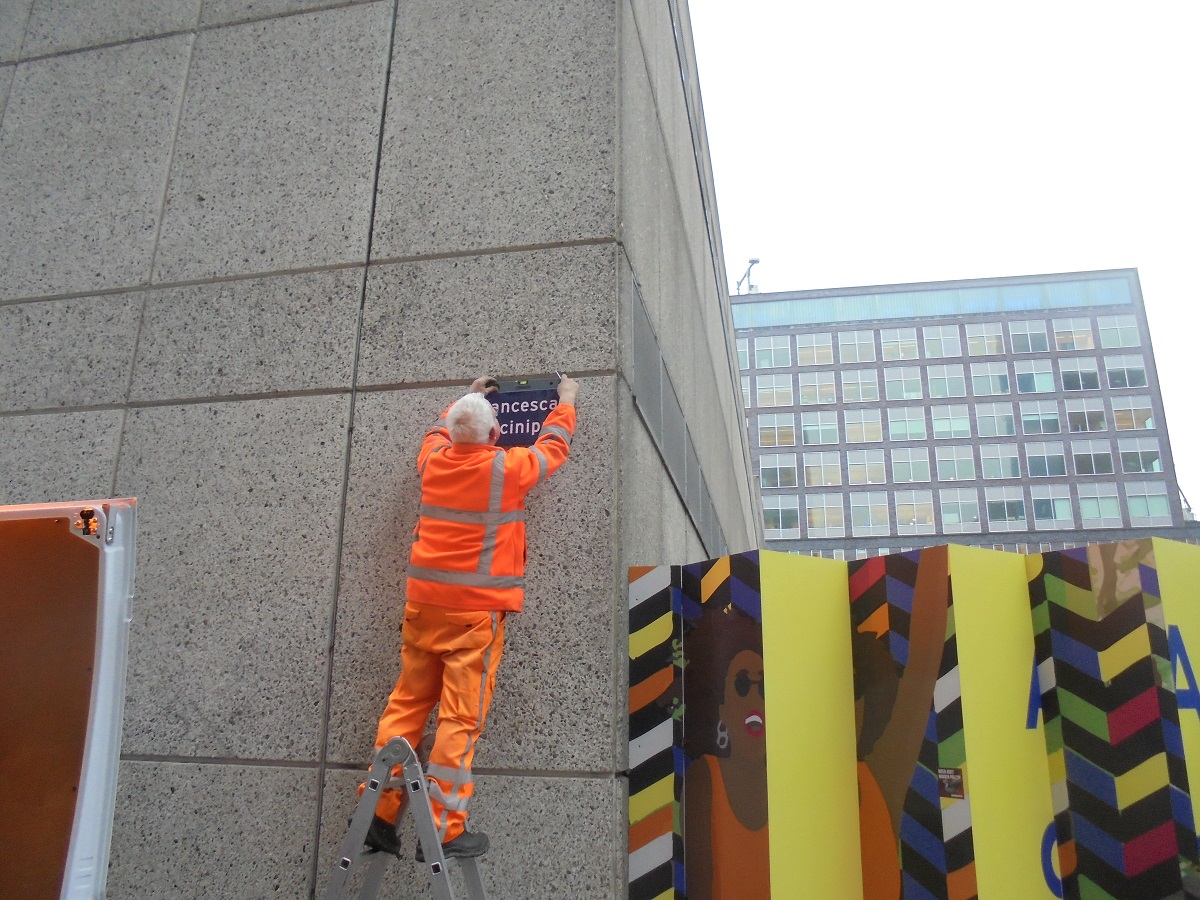 The Kenniskwartier, or Knowledge District, will become an innovation district, accommodating a mix of residential, science, health and business functions. The City of Amsterdam, VU university, Amsterdam UMC medical centre (VUmc location) and leading businesses are now working together to create a location where meeting, vitality and knowledge exchange are central. Diversity is an important ingredient of success, and so of course this should also be reflected in the choice of street names in the area. Orville Breeveld, advisor to the Concertgebouw Amsterdam, was closely involved in that choice. Breeveld is a musician, singer, composer, arranger and producer, and a famous name on the international music scene. ‘My job is to shine a spotlight on diversity in classical music. Zuidas can make an excellent contribution to that. After all, this is an area that is still dominated by men, and our existing streets are mainly named after men, so it’s high time they were joined by some women too. And preferably a few black women.’ Breeveld has quite a few ideas about which women to choose, because last year he made a six-part podcast series entitled ‘Gemiste Sterren’ (Missed Stars) for the NTR, in which he and presenter Floris Kortie look for black composers of classical music who have been unfairly forgotten. 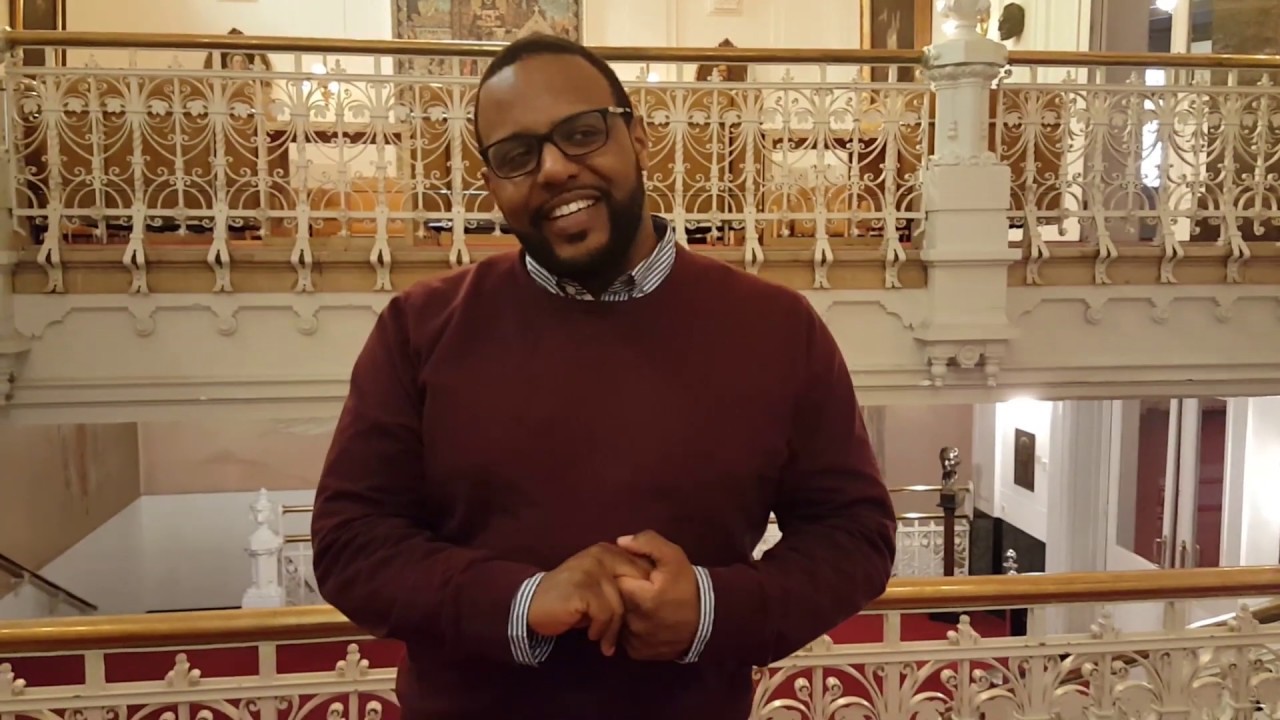 Many cultures and identities

With Breeveld’s help, project manager Susann Huber proposed five names to the City of Amsterdam’s Advisory Council for the Naming of Public Space, the successor to the Public Space Naming Committee. According to the Council, Amsterdam’s street names need to be more diverse and inclusive, so that they are a better reflection of the many cultures and identities that Amsterdam is home to. Only 12% of all streets named after people are currently named after women. The choice of female composers that Amsterdam City Council has now agreed to is a first step towards changing that.

Provisional design of the new neighbourhood with the street names 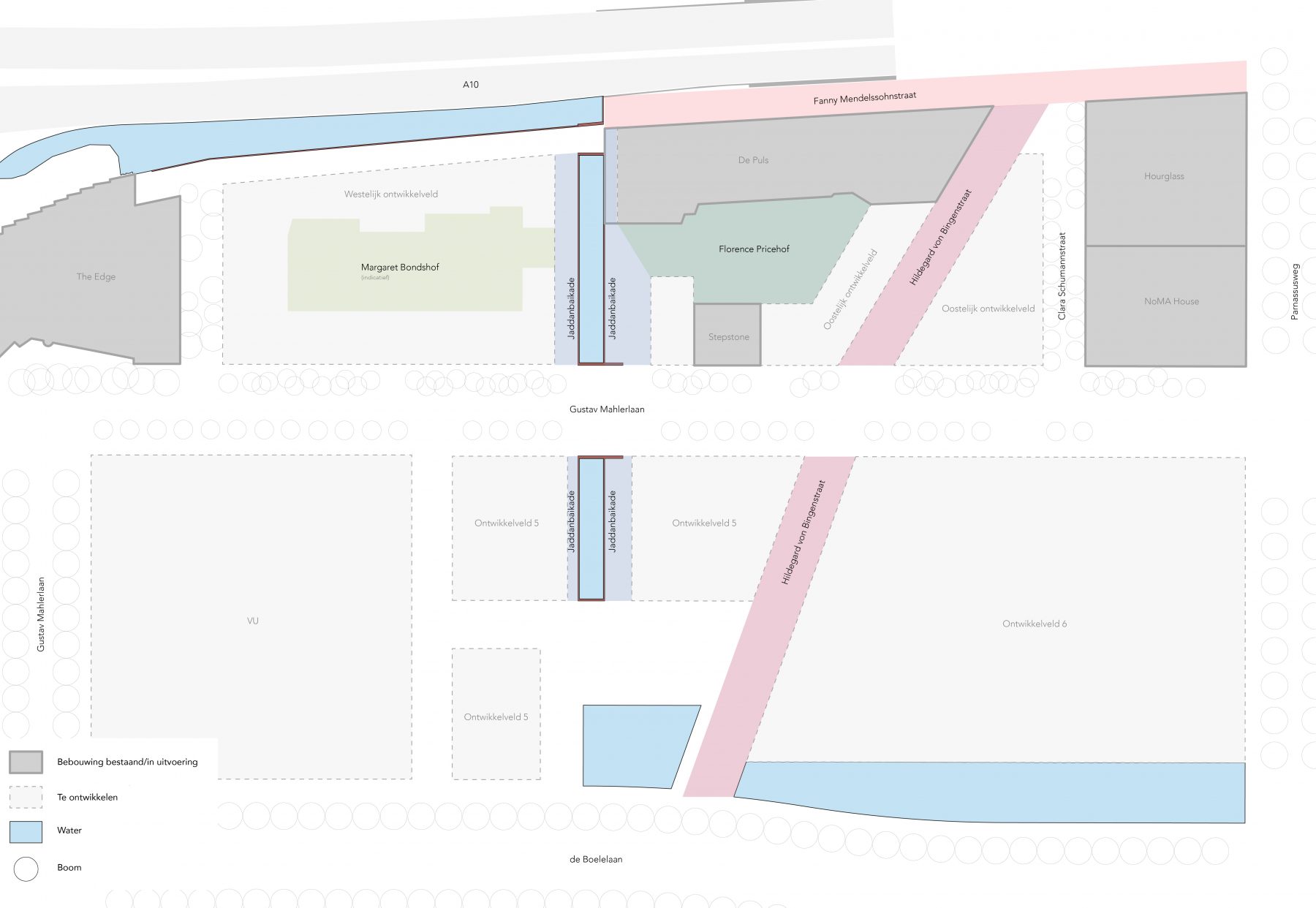 Aerial photograph of the Kenniskwartier 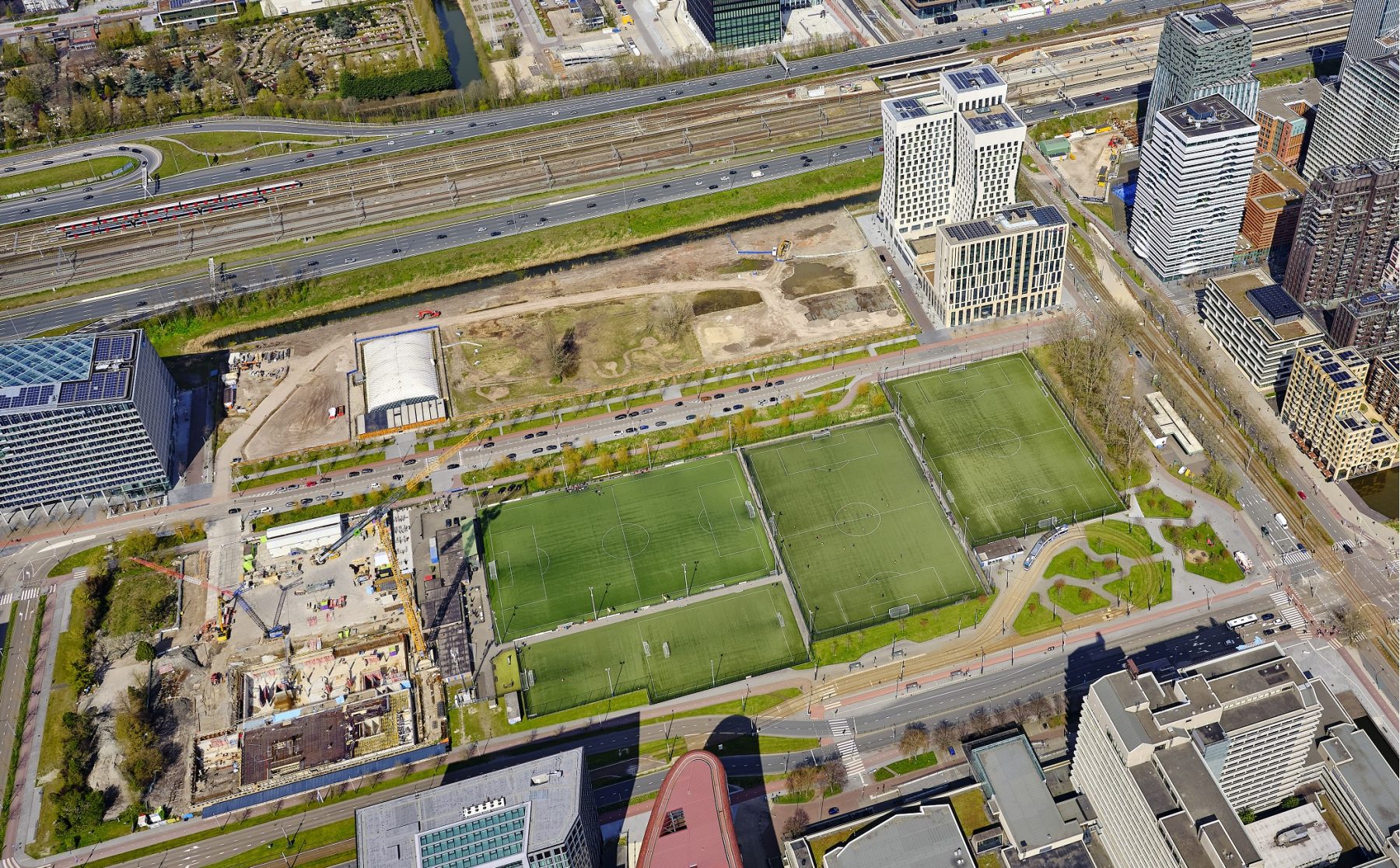 ‘Hildegard von Bingenstraat’ will be a pedestrian link running diagonally between Amsterdam Zuid station and VU University and Amsterdam UMC (location VUmc). Born in 1098, the German Von Bingen was a medieval abbess, botanist, scientist, philosopher and gifted composer. Huber: ‘The name of Hildegard von Bingen is the perfect fit for Kenniskwartier because, in addition to her talents as a composer, she also embodies science, health, entrepreneurship and even innovation.’ The only canal in the Kenniskwartier will be named ‘Jaddanbaikade’. Jaddanbai was a classical Indian composer, singer, dancer, actress and film producer. 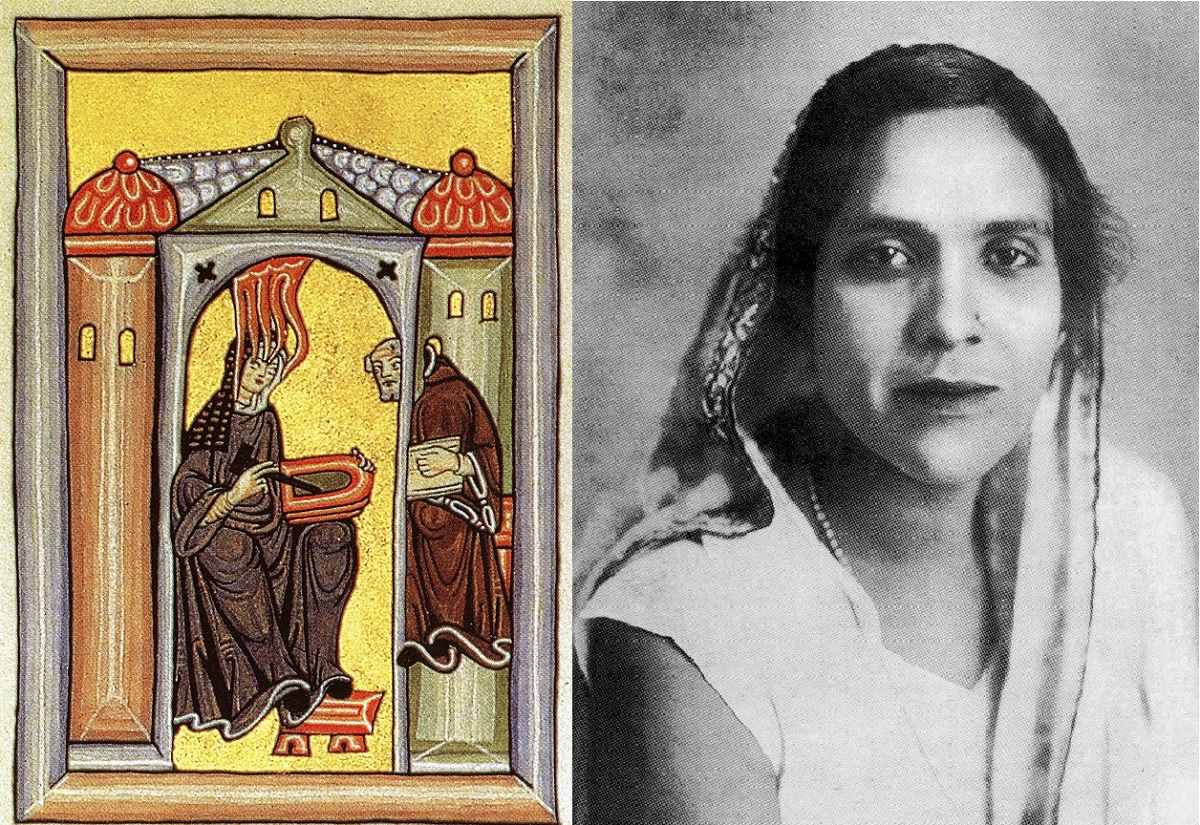 The ‘Florence Pricehof’ and the ‘Margaret Bondshof’ will be located on either side of the new canal. These two women belong together – they were roommates in the 1930s. They were African-American composers who both attracted fame and notoriety in the twentieth century – but because they were women, they never became world famous and were largely forgotten about. Florence Price was the first African-American female composer ever to have a symphony performed by a renowned symphony orchestra. Margaret Bonds is best known for writing spirituals, but she was also an activist. Breeveld has a particular soft spot for Florence Price. ‘She grew up in a wealthy family, and as a young girl she gave piano recitals for famous black activists. Unfortunately, black people were not allowed to attend the conservatory and despite her great talent, that included Florence. She was denied entry, so she pretended to be a Mexican young man so that she would be allowed in.’ 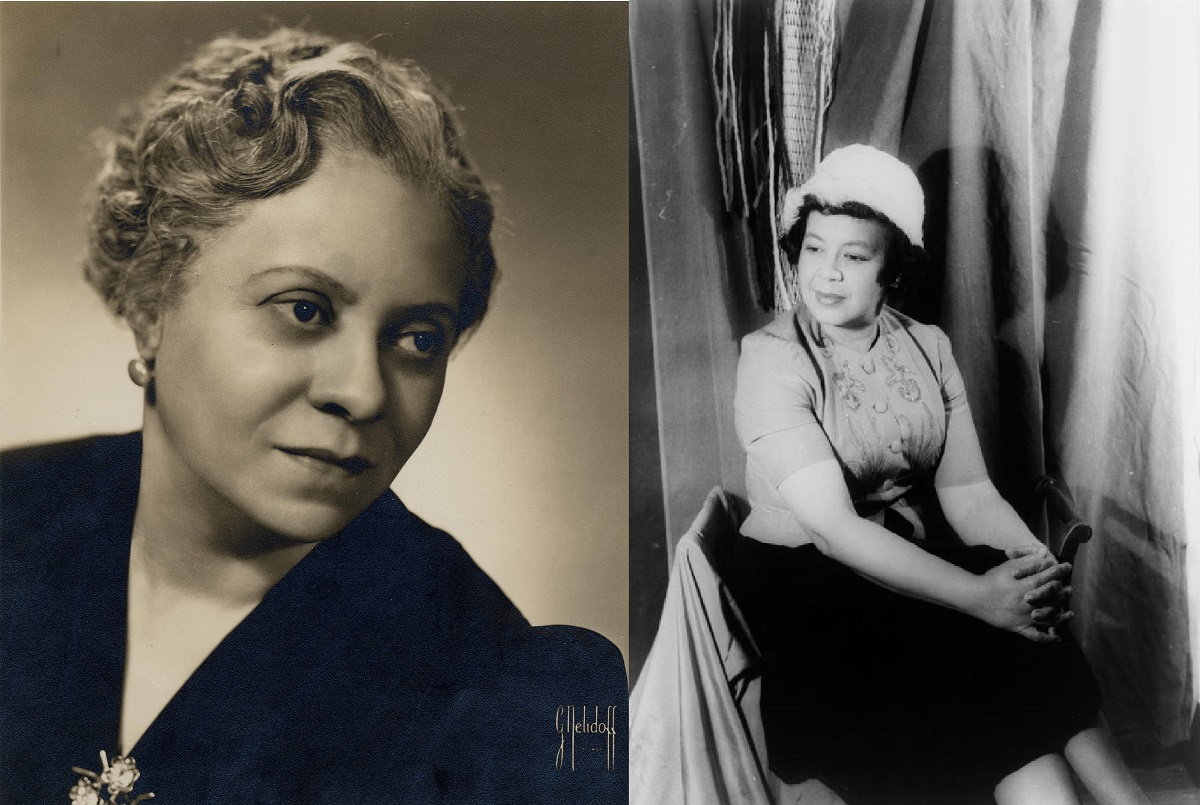 The northernmost street will be named ‘Fanny Mendelssohnstraat’. This German composer and pianist had a famous brother, Felix Mendelssohn Bartholdy. One of her music teachers wrote a letter to Goethe in 1816, describing how Fanny would ‘play the piano like a man’, which was meant as a huge compliment in those days. Fanny’s works were also performed and published under her brother’s name. 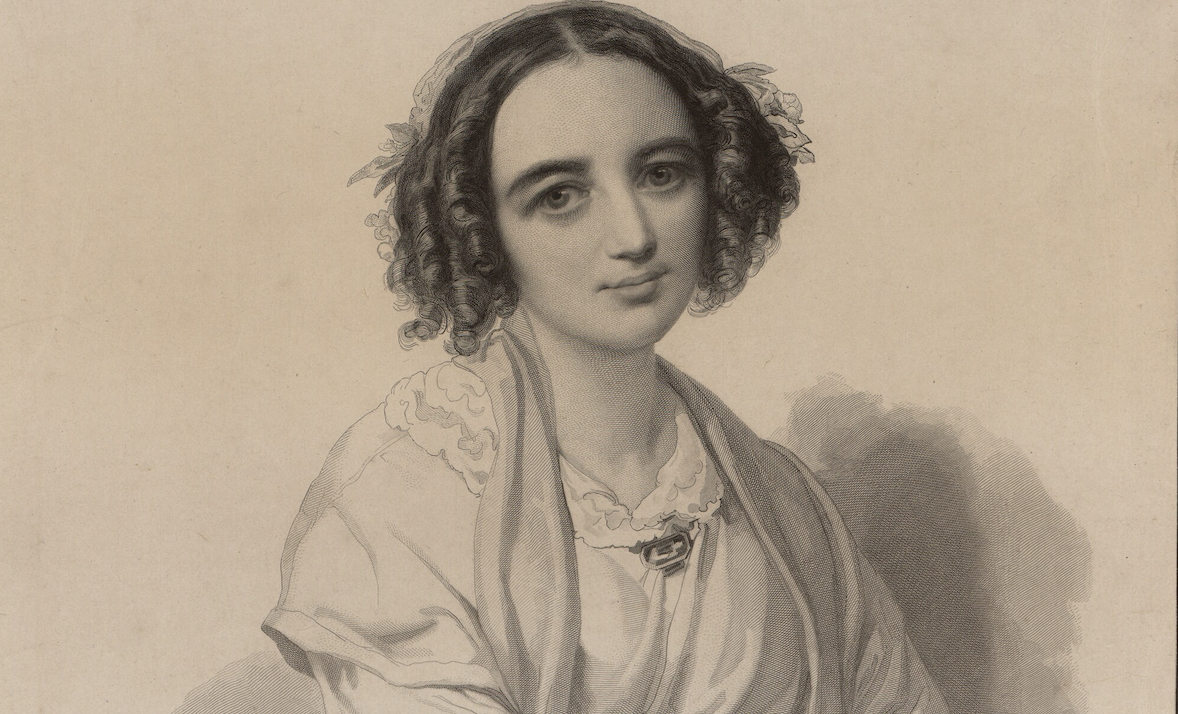 These new street names will help Breeveld’s mission of raising public awareness of ‘forgotten’ female composers. In his podcast ‘Gemiste Sterren’, Breeveld has already devoted an episode to Florence Price and pianist Djuwa Mriovili recorded a special Concertgebouw Session with works by Florence Price. Breeveld: ‘Many female composers died sad and lonely. That’s such a shame. And it’s why now, after all these years, we have to honour their work. So I’m very pleased that Amsterdam City Council has agreed to this. We have to make Zuidas a vibrant and above all inclusive place!’

The permanent base for the air ambulance will move away from the roof of Amsterdam UMC, location VUmc, significantly reducing noise pollution for local residents.
wonen-en
werken-en
December 21, 2021

An important first step has now been taken in the development of OBA NEXT. Three consortia have been invited to submit designs for the new library and the offices in the Innovation District (‘Kenniskwartier’).
More posts