Copper heart glistens behind the glass of EDGE Stadium

The new exterior of EDGE Stadium, former headquarters of Loyens & Loeff, is more or less complete. As a result, the characteristic copper heart of the building in Fred. Roeskestraat is suddenly behind a transparent façade. 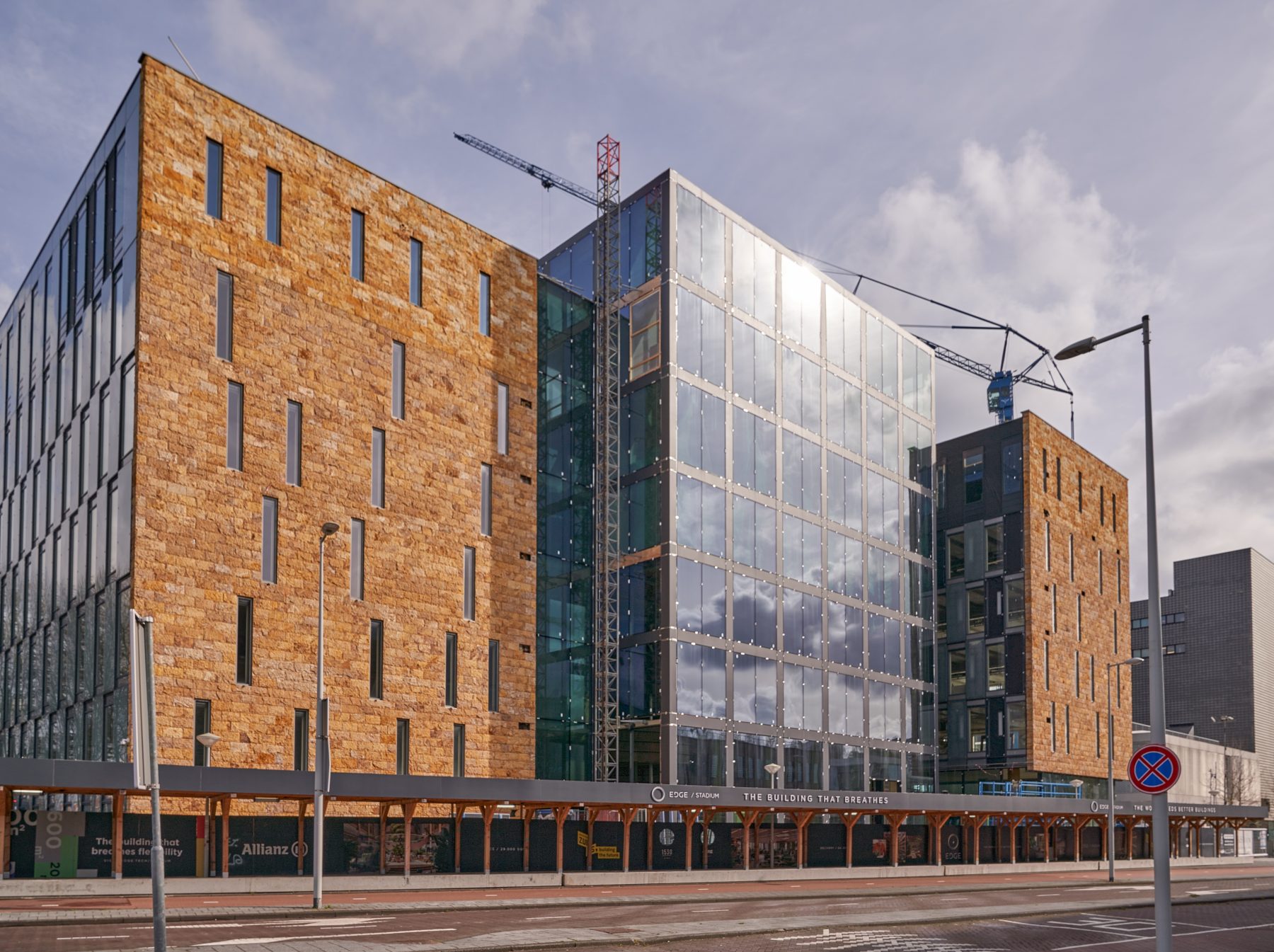 Under its previous name of Forum, the former headquarters of Loyens & Loeff in Fred. Roeskestraat won numerous awards. After its completion at the start of the century, the building was praised not only for its energy-efficient design, but also for its striking appearance. Anybody who regularly cycles on this street cannot fail to have seen the shiny, copper central section between the two wings of the building. When Loyens & Loeff relocated to Hourglass, also in Zuidas, the owner Allianz and developer EDGE seized the opportunity to give the building an upgrade. One thing was certain: the so-called ‘copper heart’ just had to stay. 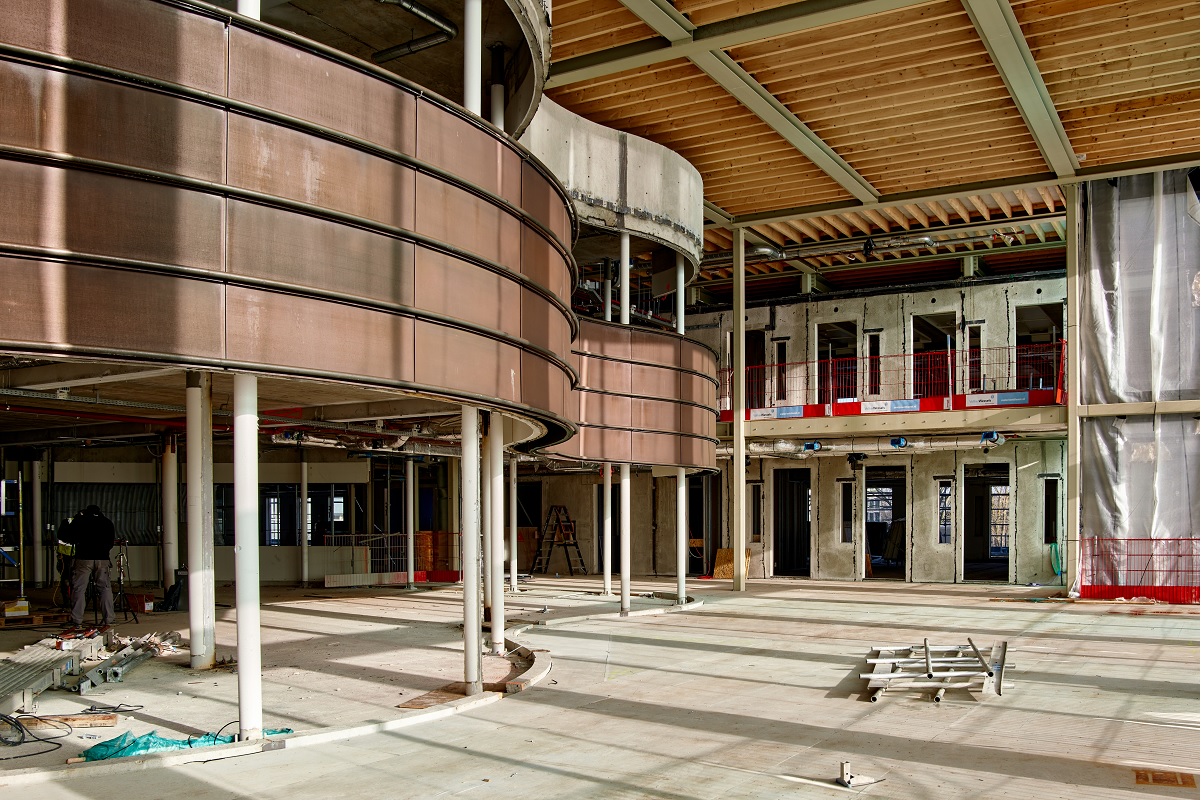 Now, two years on, the copper heart is no longer out in the open, but behind a stunning glass façade. Bo Gall, planning engineer at G&S bouw, takes us for a look behind the façade. Here – just between the glass frontage on the one side and a part of the heart on the other – is where the new central entrance will be to EDGE Stadium, the name of version 2.0 of the building. ‘With all the light and space it creates, the façade makes the building much more transparent and accessible’, explains Gall. We can only agree with that. The façade is not the only change that has been made: both the wings and the central section have had new floors added, and the wings in the atrium have been moved inwards to create more space. The building has also been given a new roof. Gall: ‘The exterior is now more or less wind- and water-proof, a key milestone. We now need to add the aluminium snap frames to the glass façade and it will be complete.’ 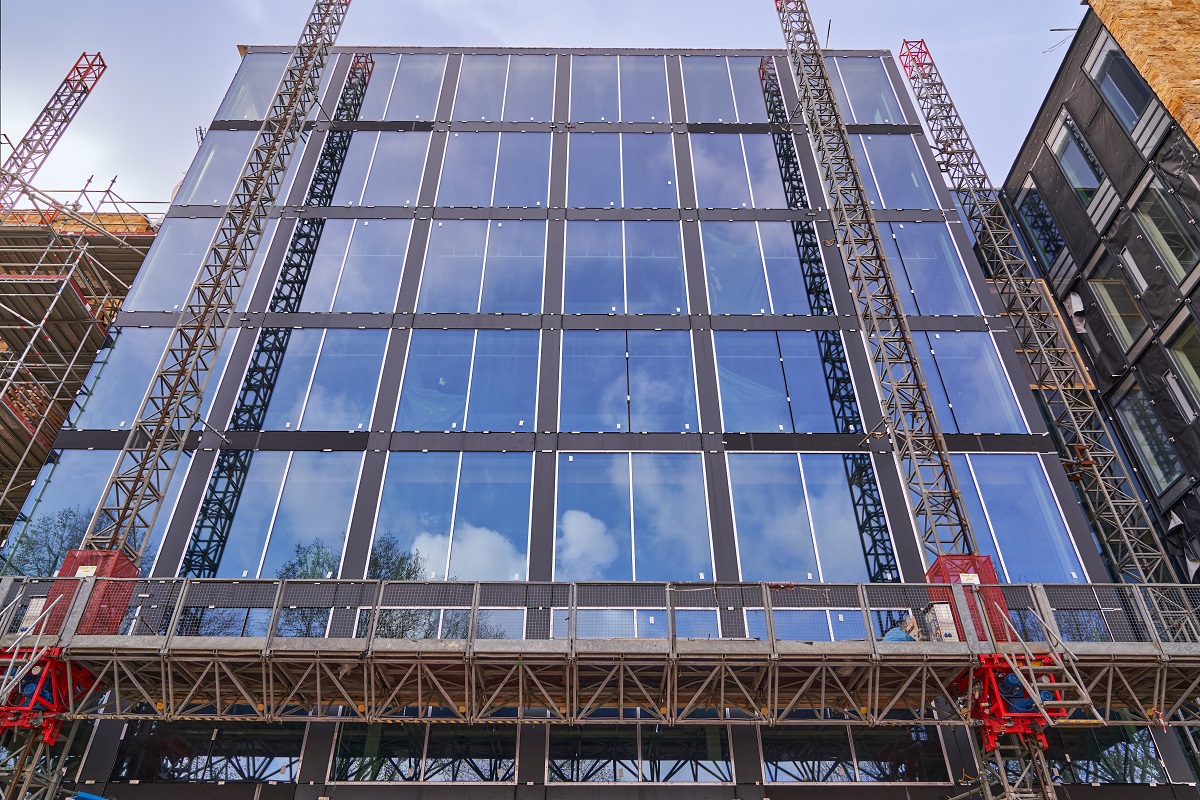 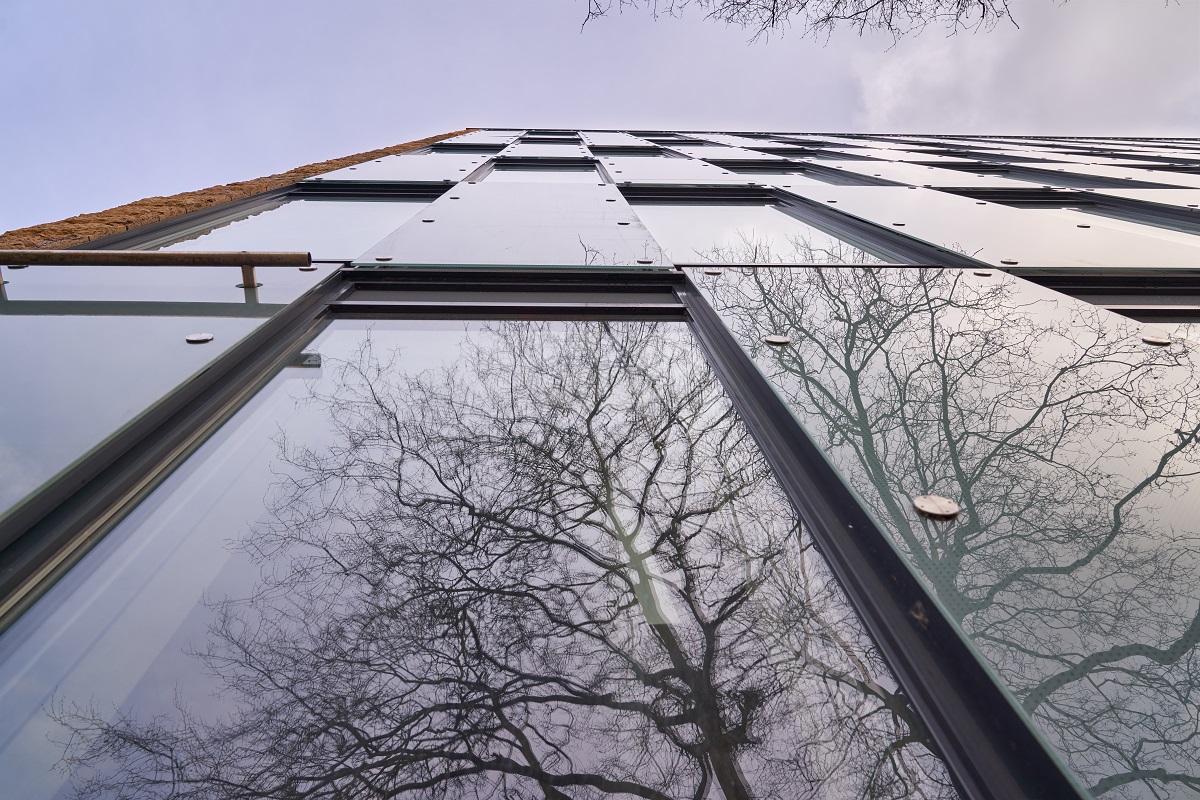 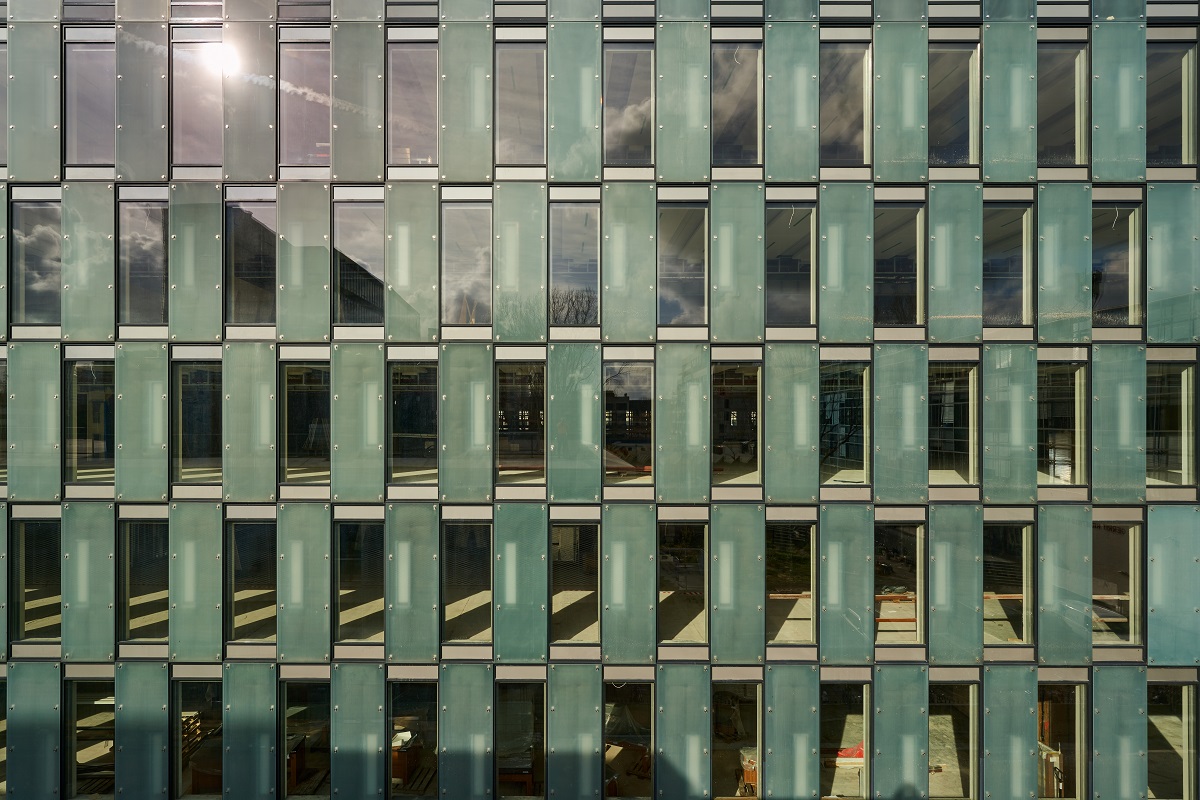 The atrium, which may be sacrificing space but offers increased intimacy, is currently still full of scaffolding. It might look artistic, but what exactly is the scaffolding for? ‘We needed it to attach the glass panels that make up the new atrium roof’, explains Gall. He guides us up to the top floor, where you get a good view of the roof. It looks like a collection of pointed glass roofs, a bit like the roof of a big greenhouse. There are two gigantic rails running along the sides. ‘They are for the glass-cleaning platform. Yes, all of that glass actually needs cleaning!’, laughs Gall when he sees our look of astonishment. ‘Pulleys will be attached to those rails that will support a cradle width-wise. Where we are now will be the parking space for that glass-cleaning platform. As soon as we’ve removed the scaffolding, we’ll attach the platform. It can move across the whole length of the roof.’ 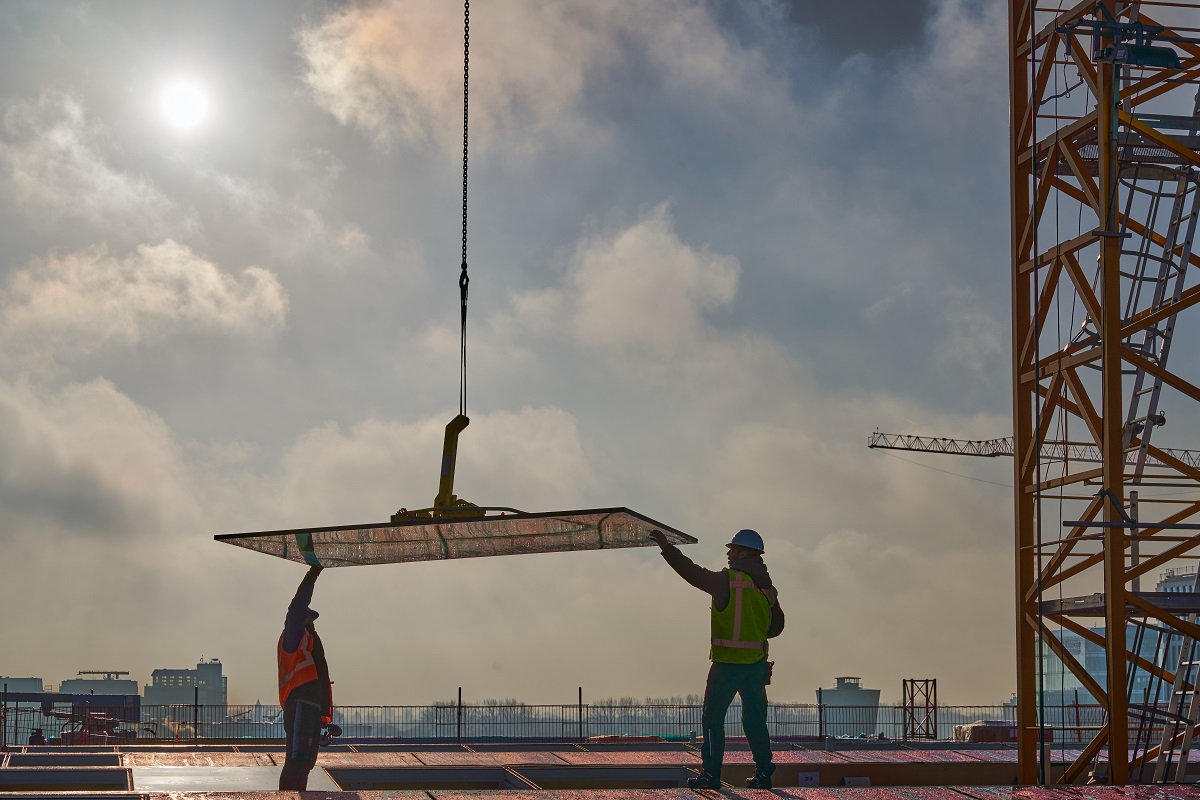 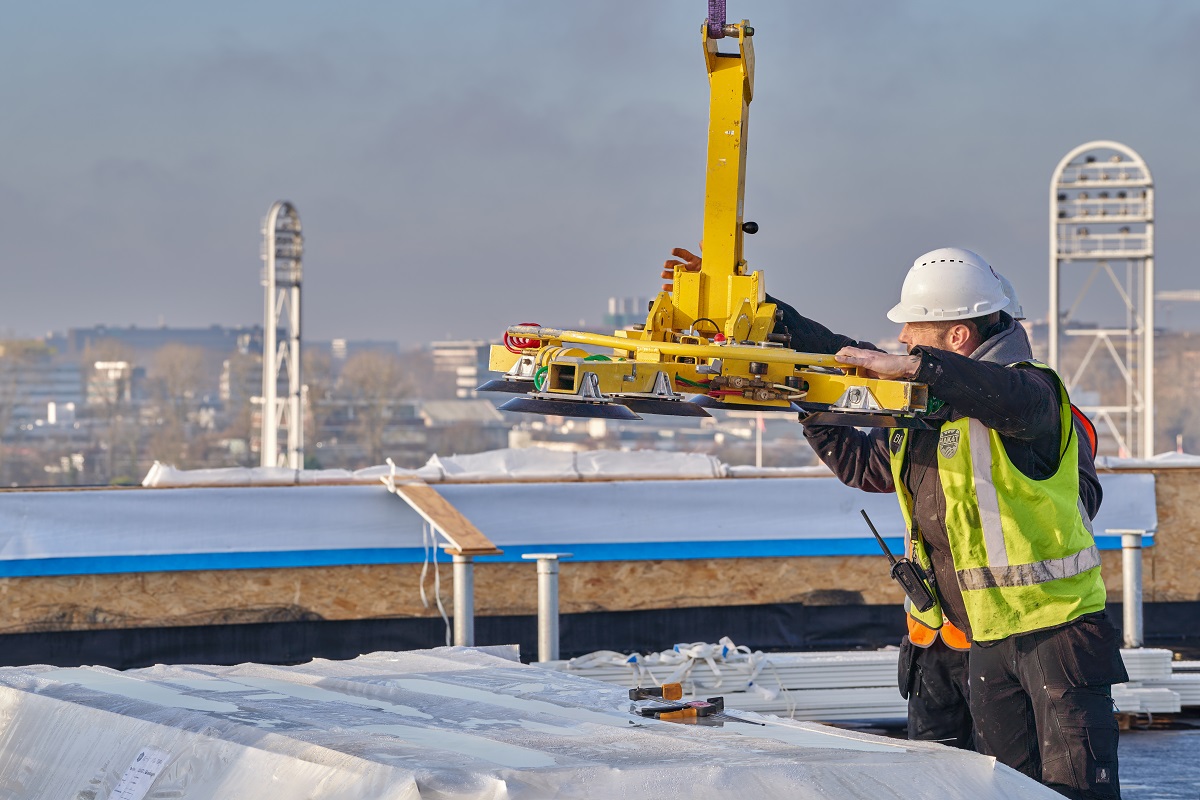 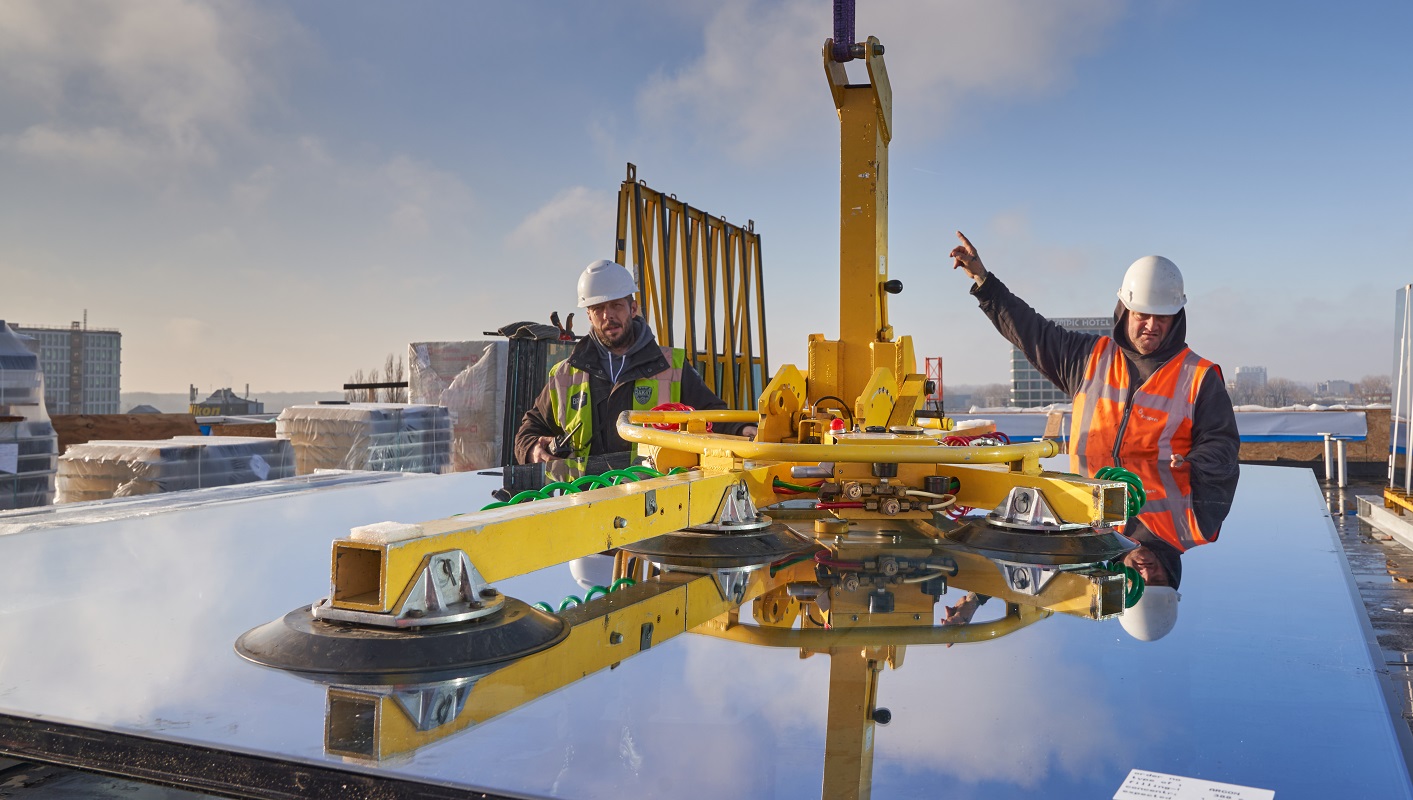 The guided tour also reveals how much hard work has also been done on the inside of EDGE Stadium. The wings have been slightly narrowed, which makes the old sliding doors – that used to lead to a type of walking balcony – became surplus to requirements. ‘But the wood was still in excellent condition, so we wanted to reuse them’, says Gall. ‘They’ve all had the locks removed and been repainted. They now serve as windows to the atrium.’ Most of the sliding doors now converted into windows are in their new position. The climate islands have also mostly been installed and some floors also now have a so-called computer floor: a raised floor that can be dismantled. Gall: ‘There are still several storeys to go. We actually need five trucks just to deliver the panels for the computer floor. It sounds a lot, but there is a lot of lettable floorspace to be tiled: 26,500 square metres.’ 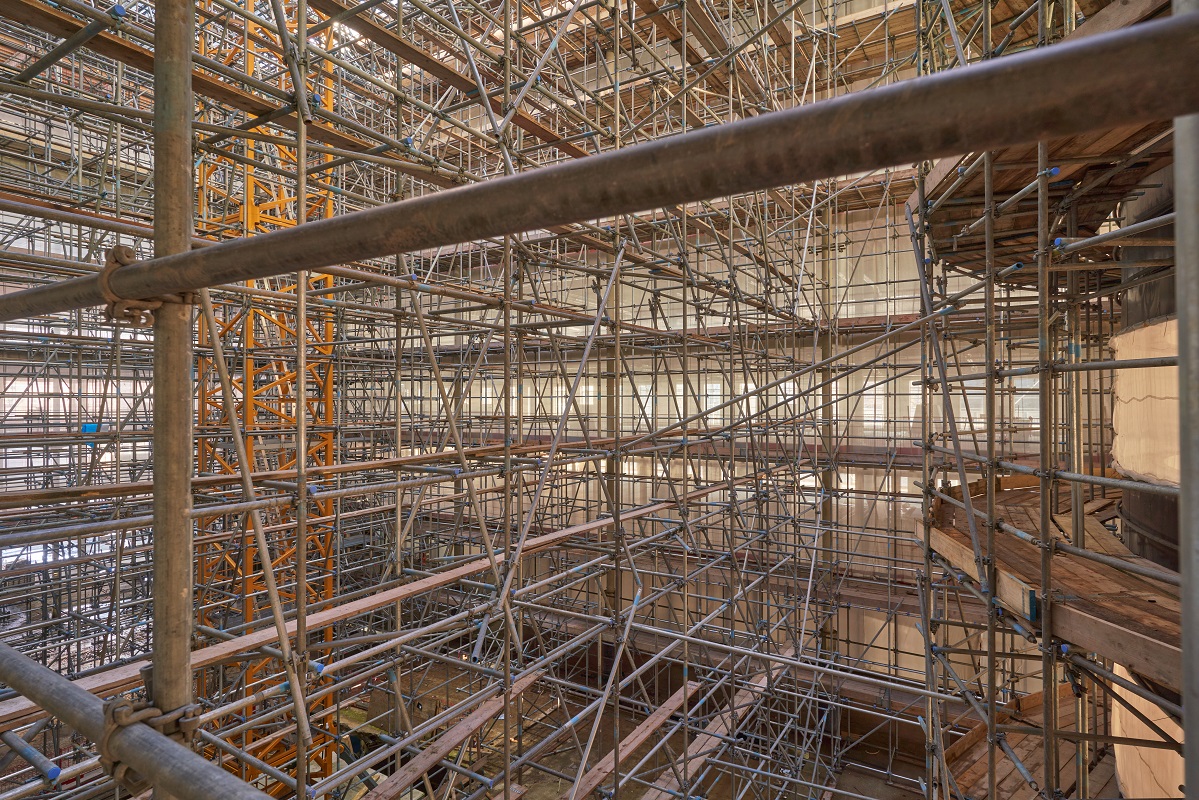 Finally, we take a look on the roof, where the air-treatment cabinets have been installed. We are confronted by two giant rectangular tubes, with a large technical installation behind them. ‘The tubes are there to suck in external air. It is then filtered in the air-treatment cabinet after which it can be cooled or heated’, explains Gall. However impressive this rooftop installation may be, our attention is still drawn to the beautiful views. And especially towards the city, where the view reaches all the way to the A’DAM Tower in Amsterdam Noord. As we stand here, several workers are still landscaping two roof terraces. ‘Looks good, doesn’t it?’, says Gall. ‘I recently gave a guided tour to staff from Loyens & Loeff, who worked here for years. This view was new to them, because there was never a roof terrace here. It will soon be the perfect place for Friday afternoon drinks.’

EDGE Stadium is expected to be completed in November 2022.

Work on VU University’s Research Building is progressing very rapidly, and the building’s highest point of 57 metres has now been reached. That means the initial phase of construction for this special building in the Kenniskwartier is now complete. One section of the building will be vibration-free.
May 4, 2022

Later in the year, construction work is expected to start on Well House, one of the world’s tallest wooden office towers. We talked to offices investment company NSI about the design, wooden construction, working in a post-Covid era and even about 'spekkoek' (a type of layered cake).
March 30, 2022

The Amsterdam City Executive has approved the development plan for the area to the east of The Edge. This makes it possible to build housing, together with amenities and offices, set in a calm and green courtyard garden.
More posts