Zuidasdok report on the second half of 2021

Zuidasdok has updated Amsterdam City Council and the Dutch House of Representatives on progress made in the second half of 2021. The renovation of Amsterdam Zuid was given the go-ahead and the tender procedure for tackling the De Nieuwe Meer interchange was initiated. 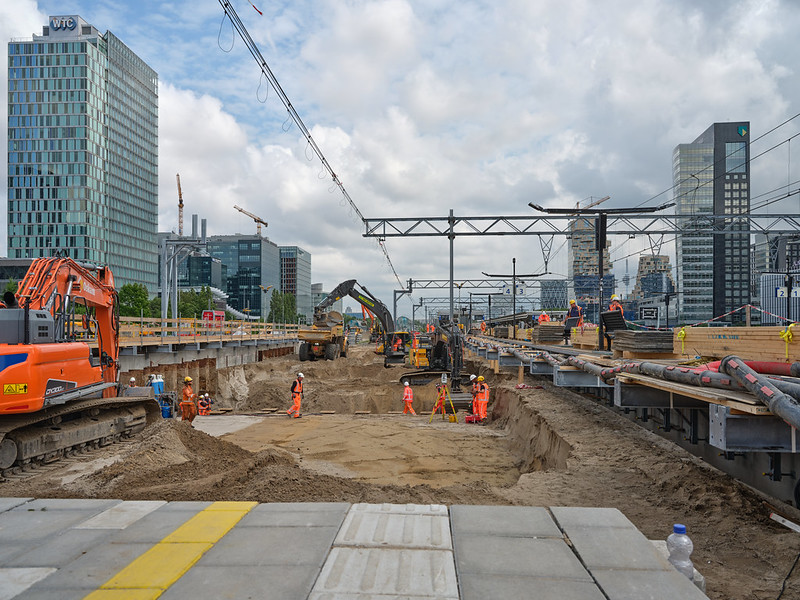 In the second half of 2021, the Nieuw-Zuid construction consortium (Mobilis, Boskalis and Van Gelder) was awarded the contract for the new construction work at Amsterdam Zuid station. The contract consists of several parts. First of all, finalising the construction of the additional passenger tunnel: the Brittenpassage. This work is now underway having previously been started by the ZuidPlus construction consortium. Secondly, the relocation of the metro platforms. They are now still to the east of the current station entrance (Minervapassage) and will be between the Brittenpassage and Minervapassage in the new situation. Thirdly, the widening of Minervapassage and fourthly the widening of the railway platforms. On 15 April of this year, Nieuw-Zuid was commissioned to develop and realise the first two parts. The consortium has now started preparing an 11-day period of works during the summer.

On 6 December 2021, two contracting consortia were invited for the so-called dialogue phase of the tender for De Nieuwe Meer interchange. These are TriAX (Besix, Dura Vermeer and Heijmans) and the Nieuw-Meer construction consortium (Boskalis, Volker Wessels Infra, Mobilis and Van Gelder). The dialogue will take place from January to June 2022. Both contracting consortia will submit their offers at the end of July 2022. The contract for the work is scheduled to be awarded at the end of 2022.

The tender procedure for the tunnel under the A10 Zuid is currently being prepared and will be launched after the summer.

The report points out that progress on the further renovation of the station, the reconstruction of De Nieuwe Meer and Amstel interchanges and the construction of the motorway tunnel will depend on decisions made about the additional budget required for the realisation of Zuidasdok. The official commissioning authorities are currently consulting on this.

Read the Dutch version of the Zuidasdok half-yearly report | for the period from 1 July until 31 December 2021.

While the A10 Zuid motorway is closed from 22 July 2022 onwards we are going to be vibro driving 80 sheetpiles into the ground which are needed for the Brittenpassage excavation work later on. This work may cause noise pollution. We invite you to attend the drop-in meeting on Tuesday 5 July.
June 22, 2022

Starting on 16 July 2022, major works will be taking place at and around Amsterdam Zuid station. In addition to road and track closures, people may also experience noise nuisance in the neighbourhood. Come along to the walk-in information meeting in the WTC on 5 July 2022.
June 21, 2022

In the embankment along the A10 West, next to Luchtvaartstraat, there are some very important cables and pipelines. They are usually underground, but in order to enable the updating of the De Nieuwe Meer interchange, they need to be moved and exposed to daylight. This is happening until July 2022.
More posts