For the third consecutive weekend, we have been working on the first roof section for the Brittenpassage, the extra passageway underneath Amsterdam Zuid station. We were also working at other locations. It was not possible to complete all of the work on time. 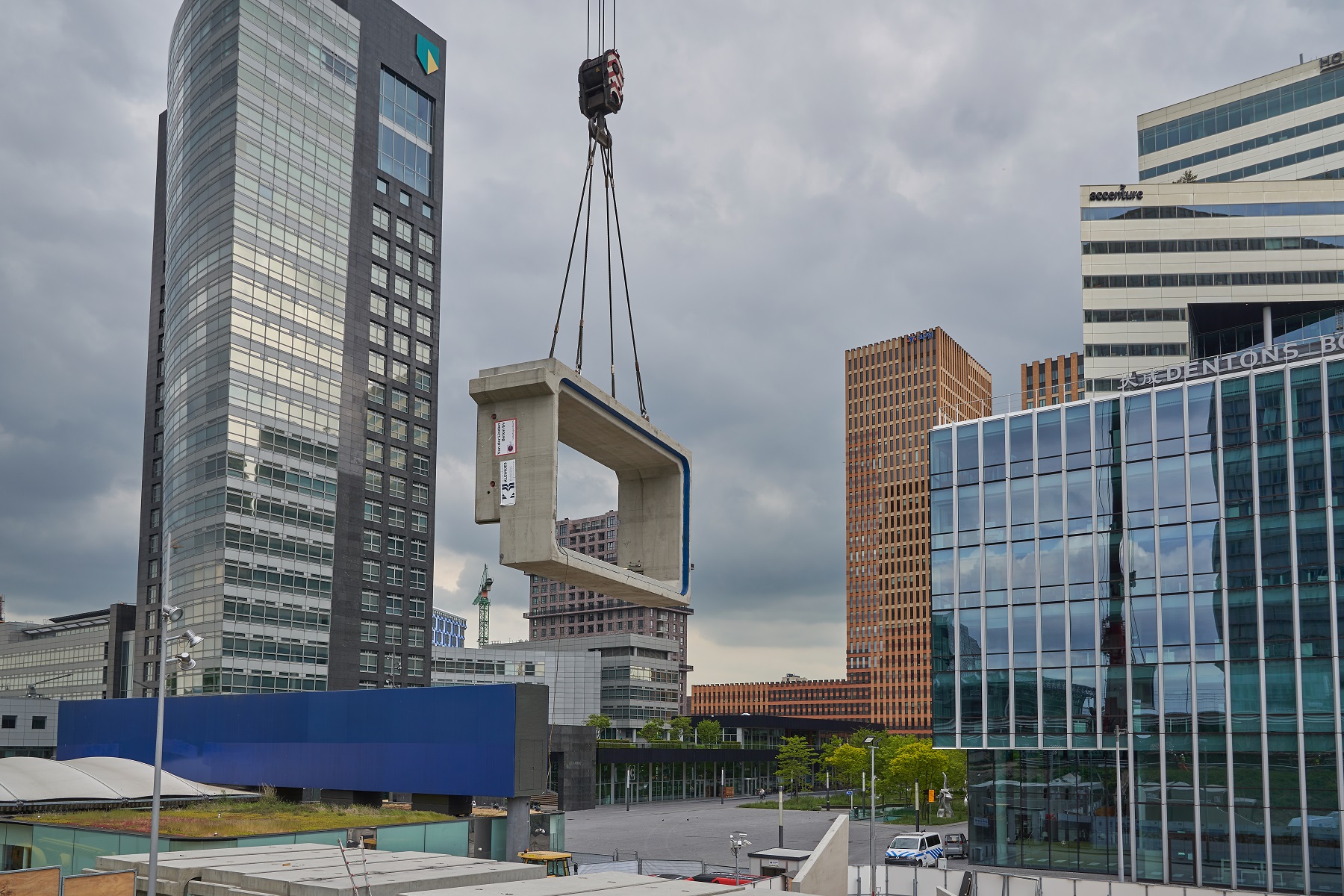 As in the previous two weekends, the main task in the weekend of 25 and 26 May 2019 involved a lot of pile-driving. The foundation piles are needed to make it possible to shift the huge, roof section of the Brittenpassage, weighing some 3 million kilos, into position. In the end, it was not possible to get all of the foundation piles into the ground and reinforce them.

Other work was also done during the last weekend. Maintenance work was carried out on the platform roofs at RAI station and we replaced the sleepers (the concrete ties on which the rails lie) at Amsterdam Zuid station. The most important part was the preparatory work for an abutment: a foundation block 12 m in length and 8 m wide, on which the new roof section will rest. Underneath it, there will be foundation piles of around 30 m in length. These hollow steel piles need to be reinforced and then filled with concrete. This will give the piles the additional strength they need to support the new roof section. Unfortunately, it was not possible to complete the reinforcement and concreting work on all of the piles last weekend.

More or less the same work was carried out on the Vivaldi tunnel, the cyclists’ pedestrians’ underpass/ecopassage leading from Antonio Vivaldistraat to Beatrixpark. Again, work did not proceed totally according to schedule.

The final train departs on the night of Friday/Saturday 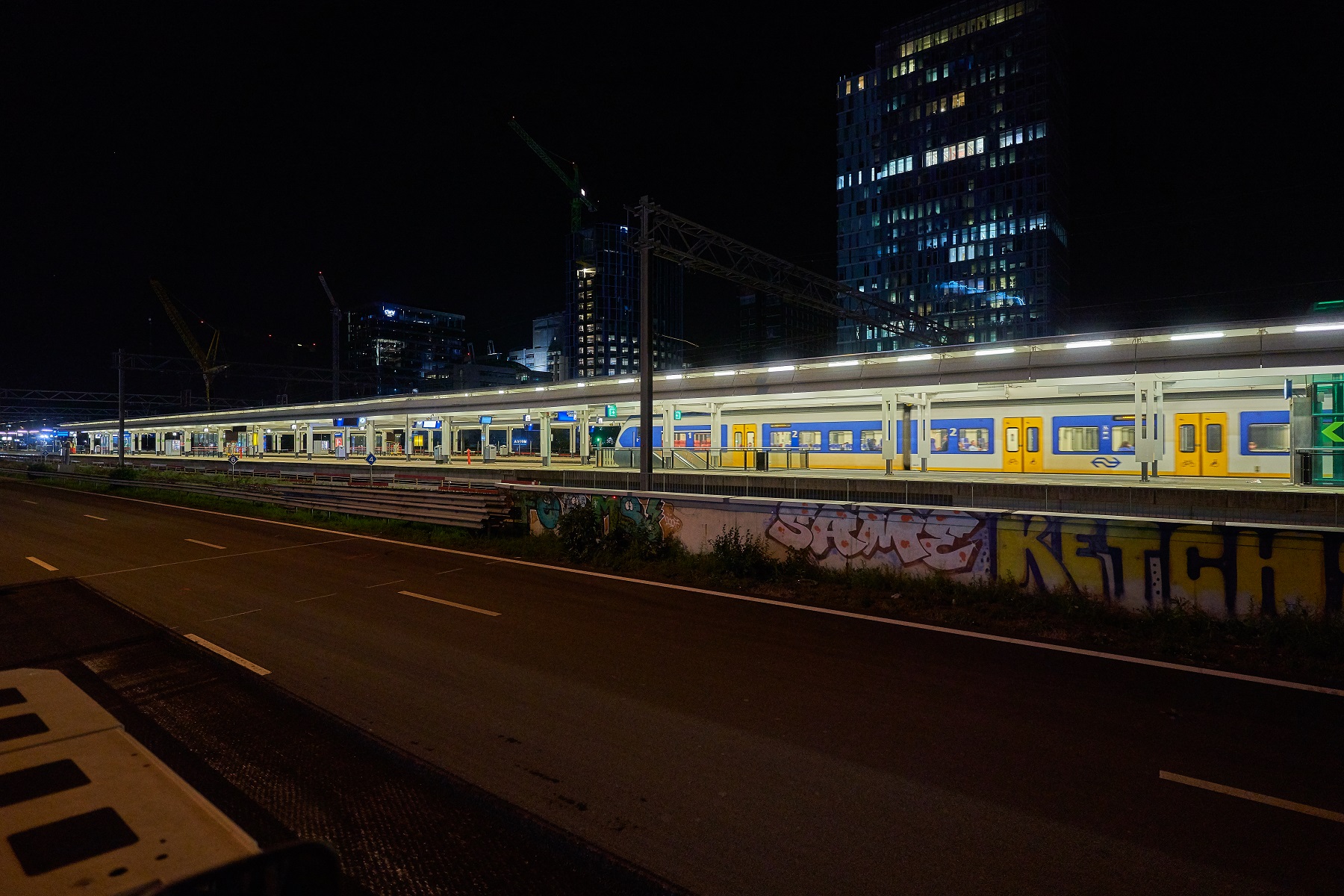 The emergency platforms are then removed 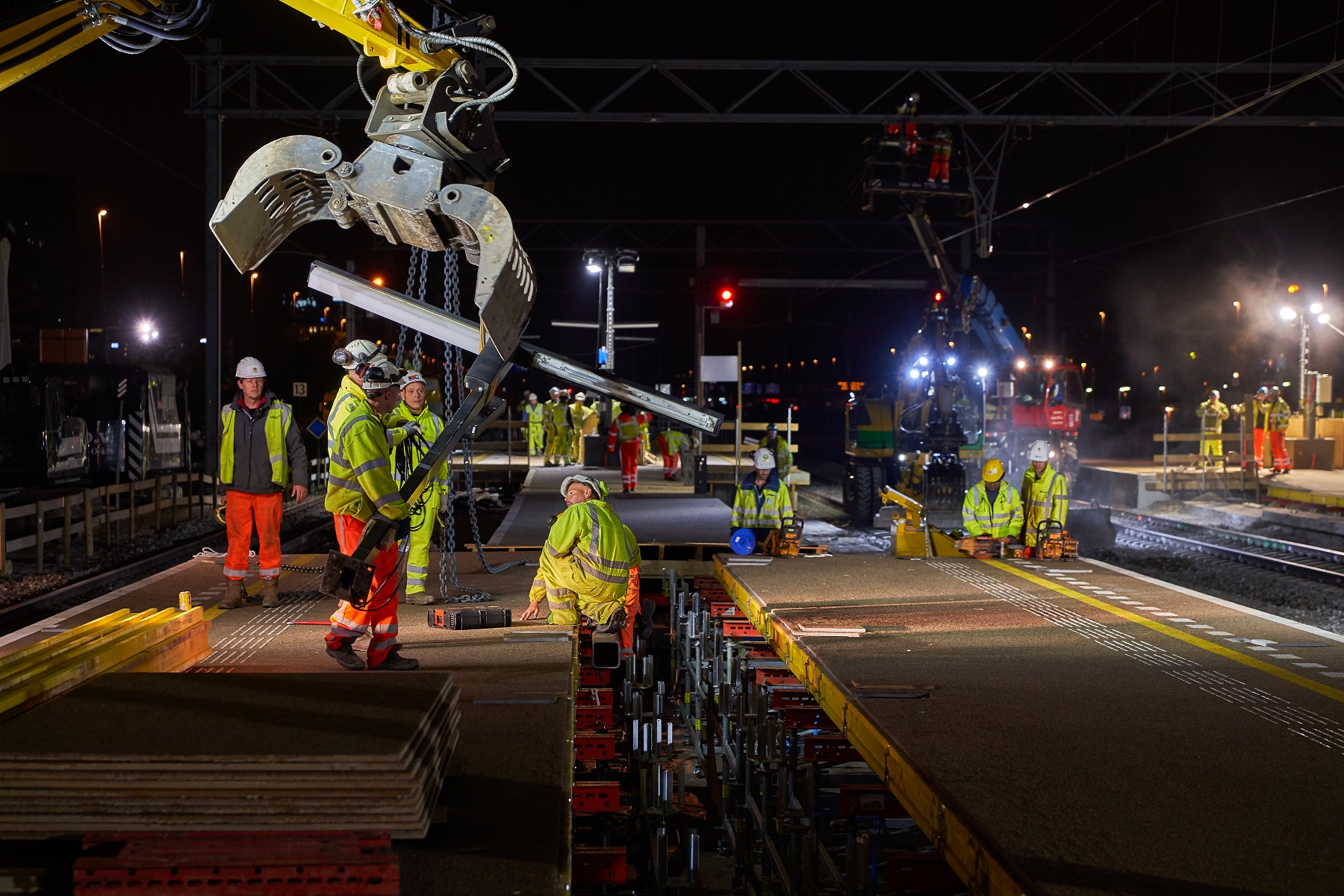 The asphalt surface is removed from the A10 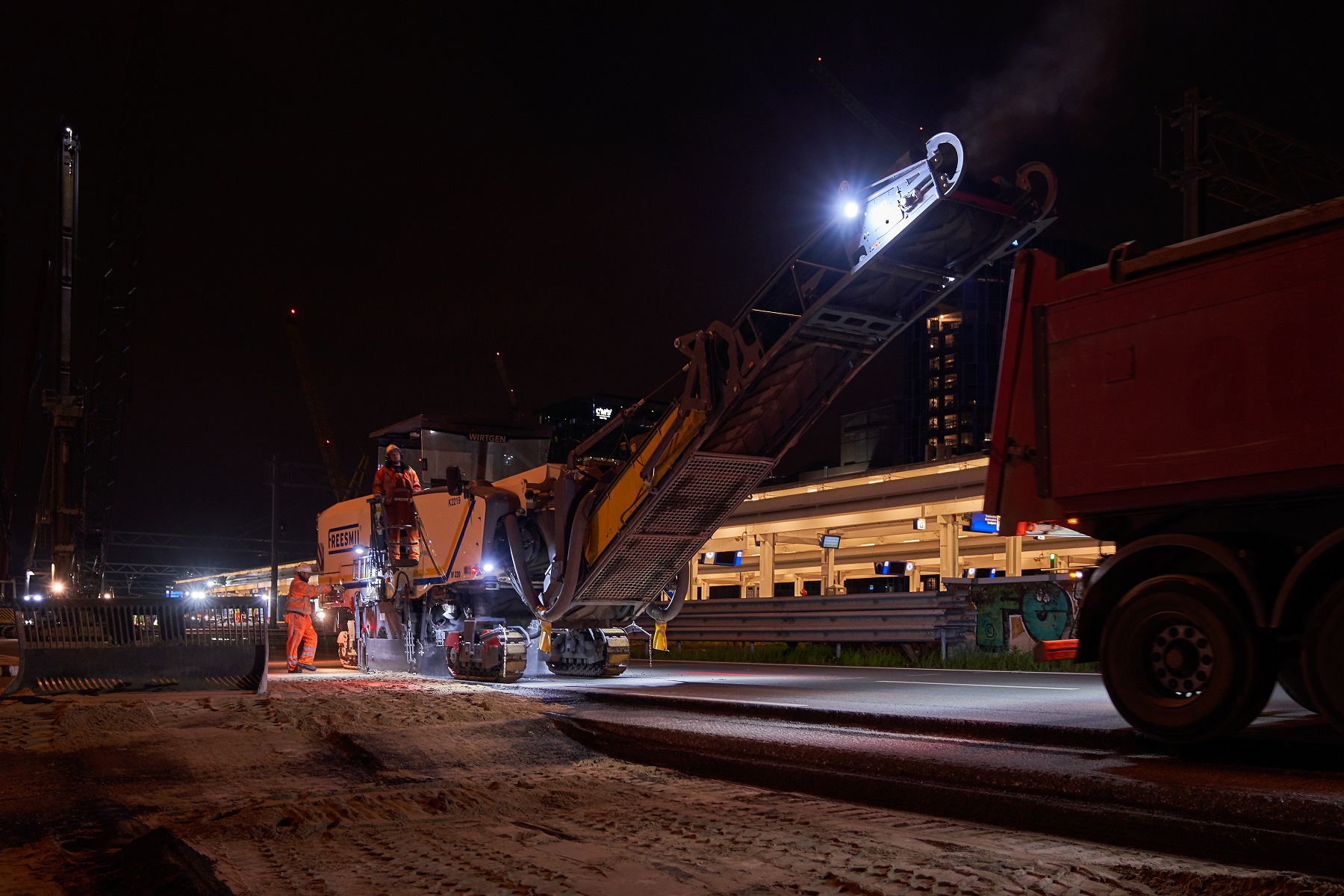 On the afternoon of Friday 24 May, we reported that the route from the train platforms to the Parnassusweg entrance/exit will remain closed for the next week. This is to give the ZuidPlus construction consortium as much time as possible for building work (rather than wasting time temporarily reinstating the pedestrian route to Parnassusweg). For today and the rest of the week, NS (Dutch Railways) will ensure that staff direct people to the right exit.

People who were looking forward to watching the work on the Brittenpassage live on webcam were disappointed on Saturday. Part of Zuidas was without power because of work on the electricity grid. We only heard about this on Saturday morning. It meant that the webcams were also without power and out of action. They were working again from around 16.00 on Saturday.

On the Minervapassage at the main entrance to Amsterdam Zuid station, we worked on the widening of the entrance to Mahlerplein. This complicated job involved completely digging up part of the A10. Work to put the separate sections of the extra tunnel into position and resurface the A10 was successful. It was possible to reopen Minervapassage early on Sunday morning and the widening work itself will be completed this summer.

Saturday morning, 25 May: digging up the A10 alongside the Mahlerplein entrance to the station 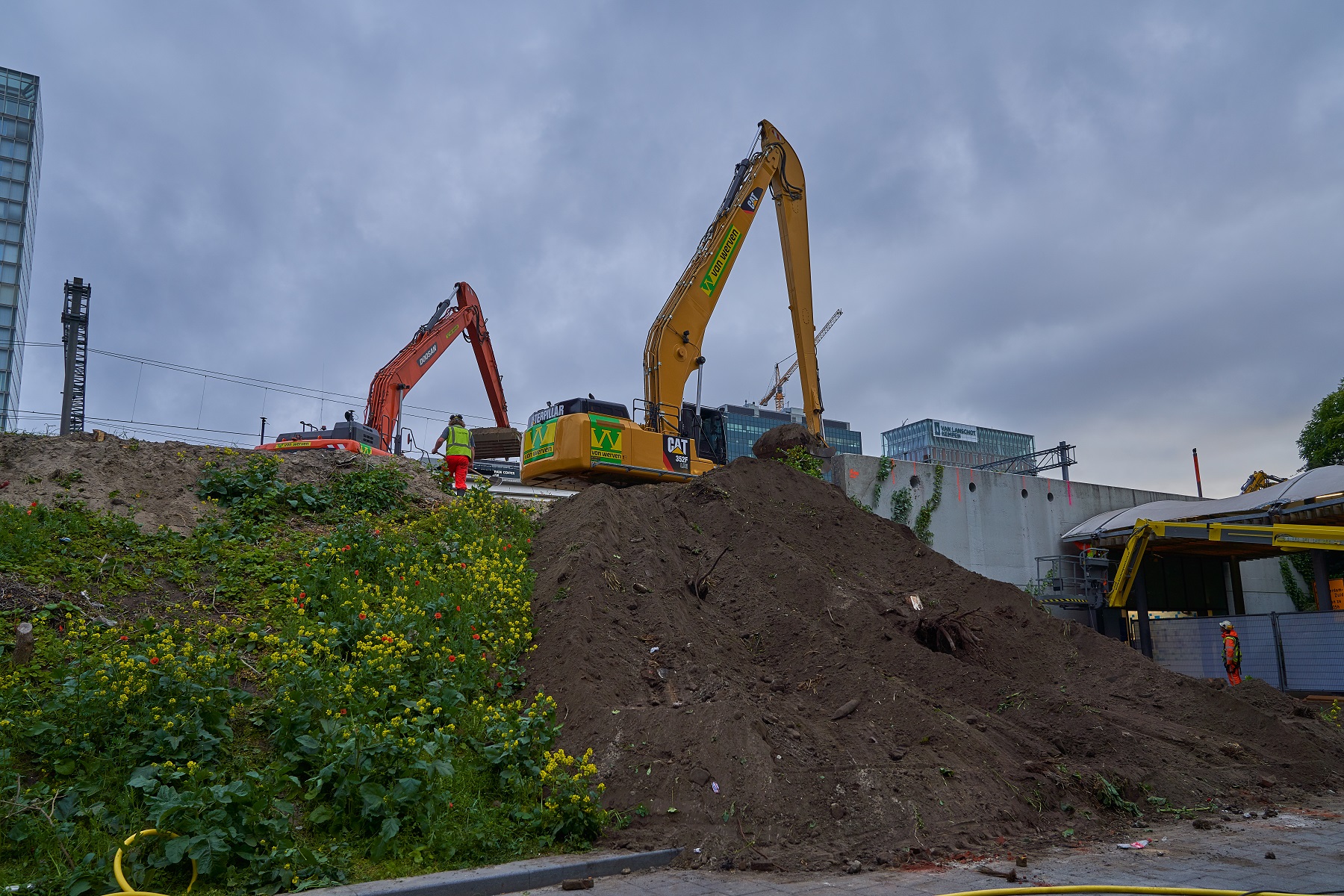 The first ’slice’ of the tunnel is in place 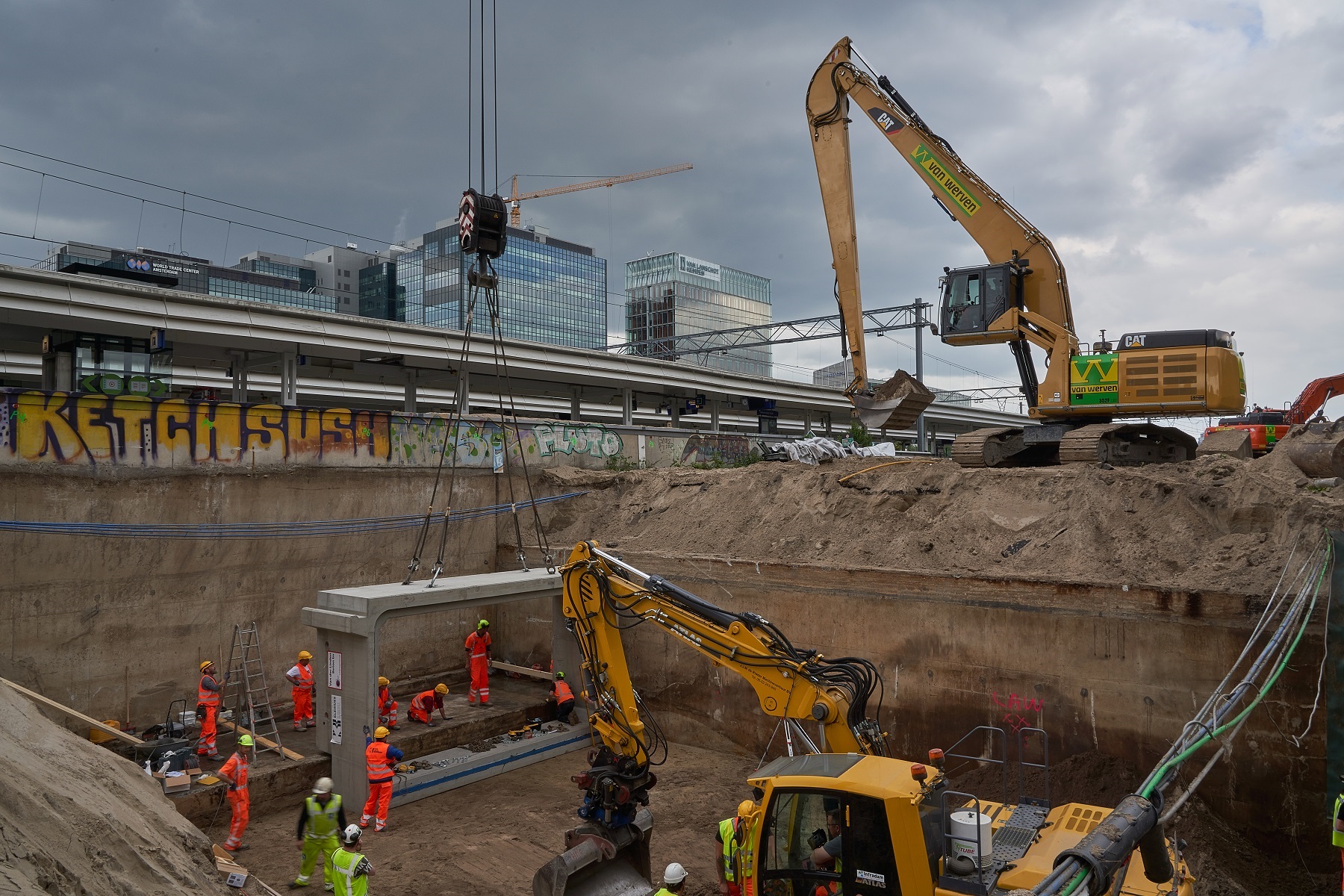 Saturday afternoon was busier this weekend than during the previous two weekends when the A10 Zuid was out of action. Traffic was particularly busy in the city in the area at Hollabrug (between Badhoevedorp and Nieuw Sloten) and in Nieuw West (on Baden Powellweg and at the roundabout on Amsterdamse Baan). It was also very busy around Hoofddorpplein despite the fact that we had taken all of the measures agreed in advance. The traffic queue on Aalsmeerweg reached almost all the way to the S107. We deployed an additional message sign trailer on the S107 with details of an alternative route.

There were also issues on the motorways, with various accidents and breakdowns on Saturday afternoon. An accident on the A9 caused over an hours’ delay between Amstelveen and the Holendrecht junction. As a result, traffic also began to become congested on roads in Amstelveen. Police were on hand to keep important junctions clear.

Sunday evening, 26 May: the road above the Minervapassage tunnel is resealed 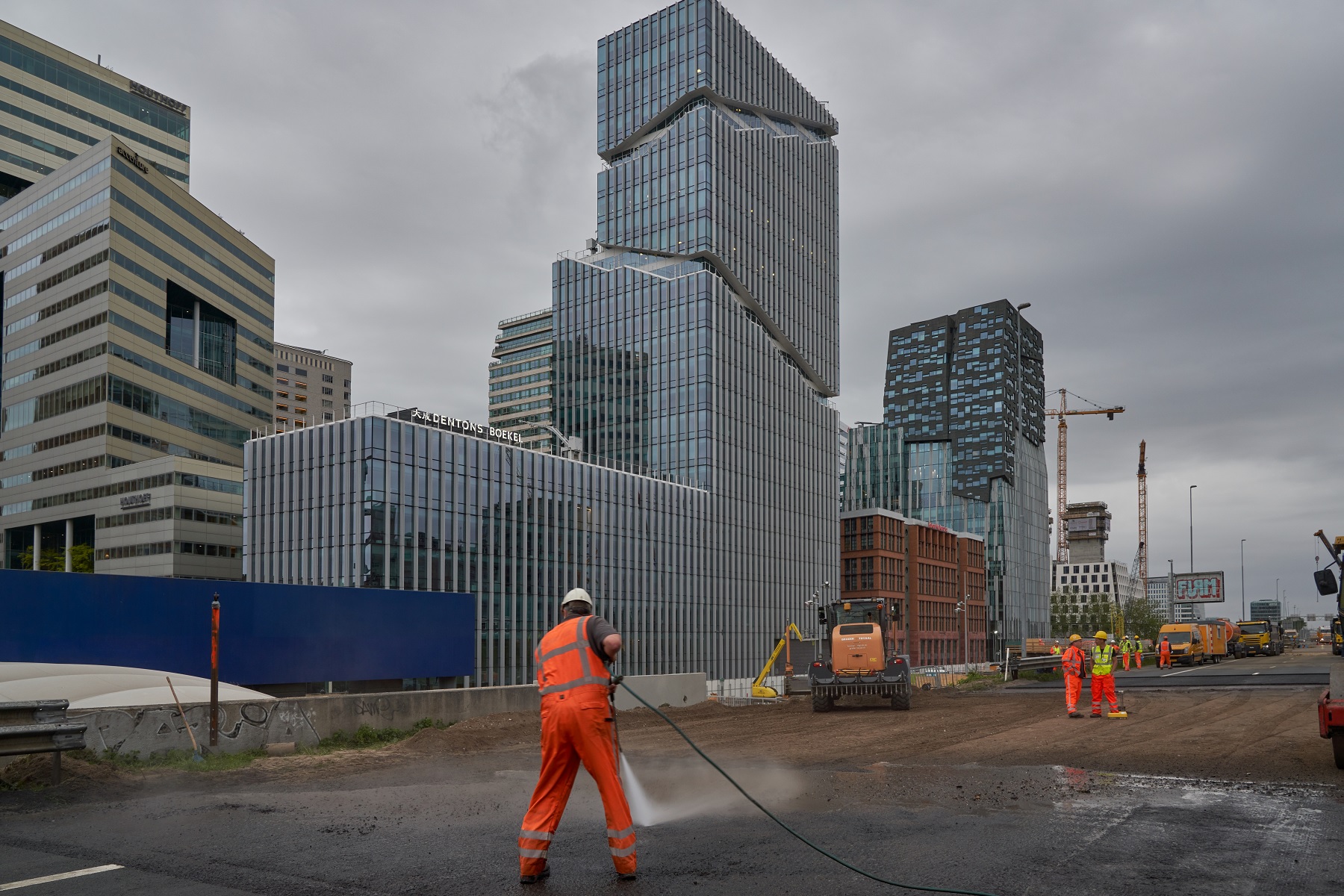 The road is resurfaced 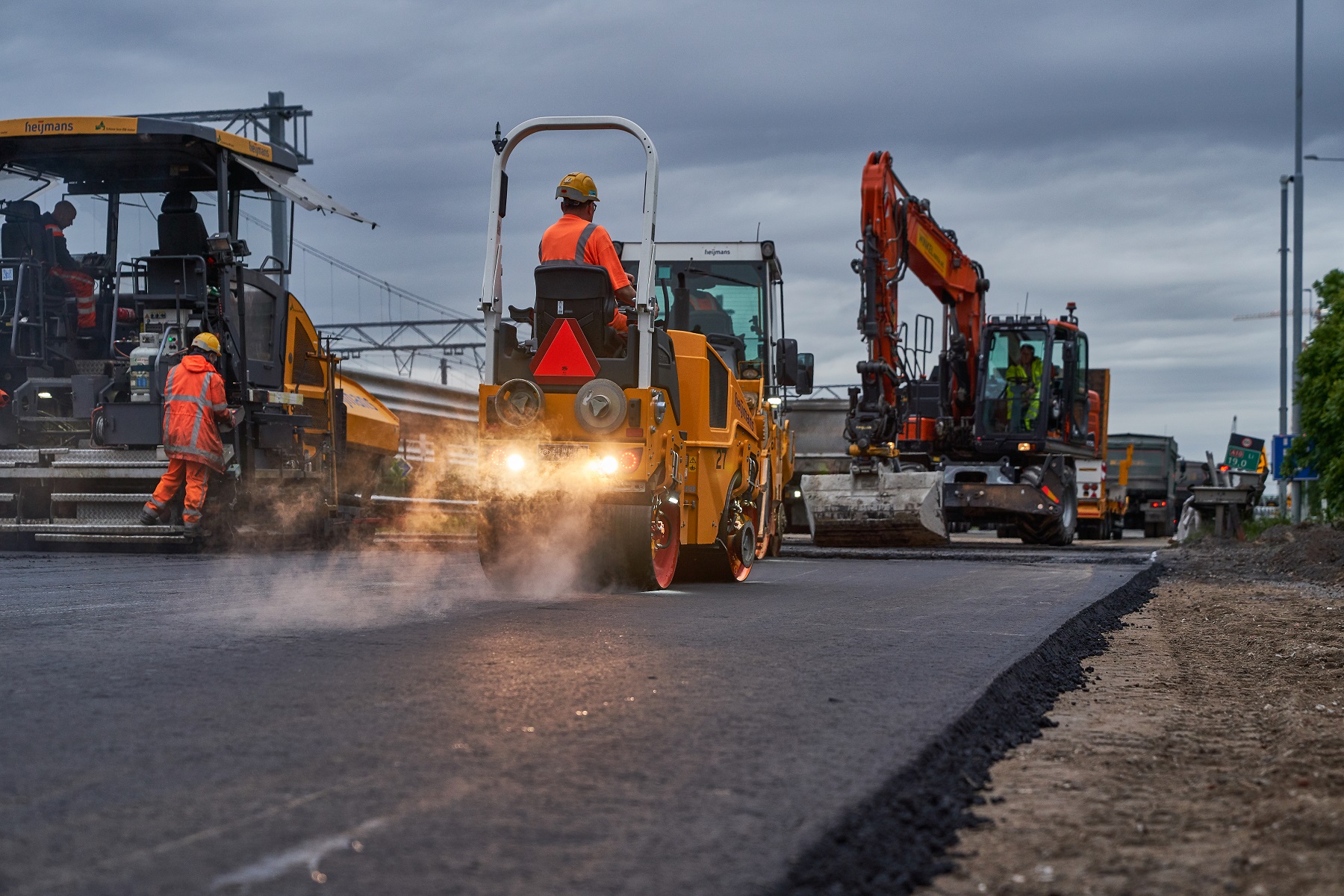 After the road was resurfaced, the platforms reconstructed and the rails repositioned, we were able to open the railway and road again on the morning of Monday 27 May. The exact time was 04:26. 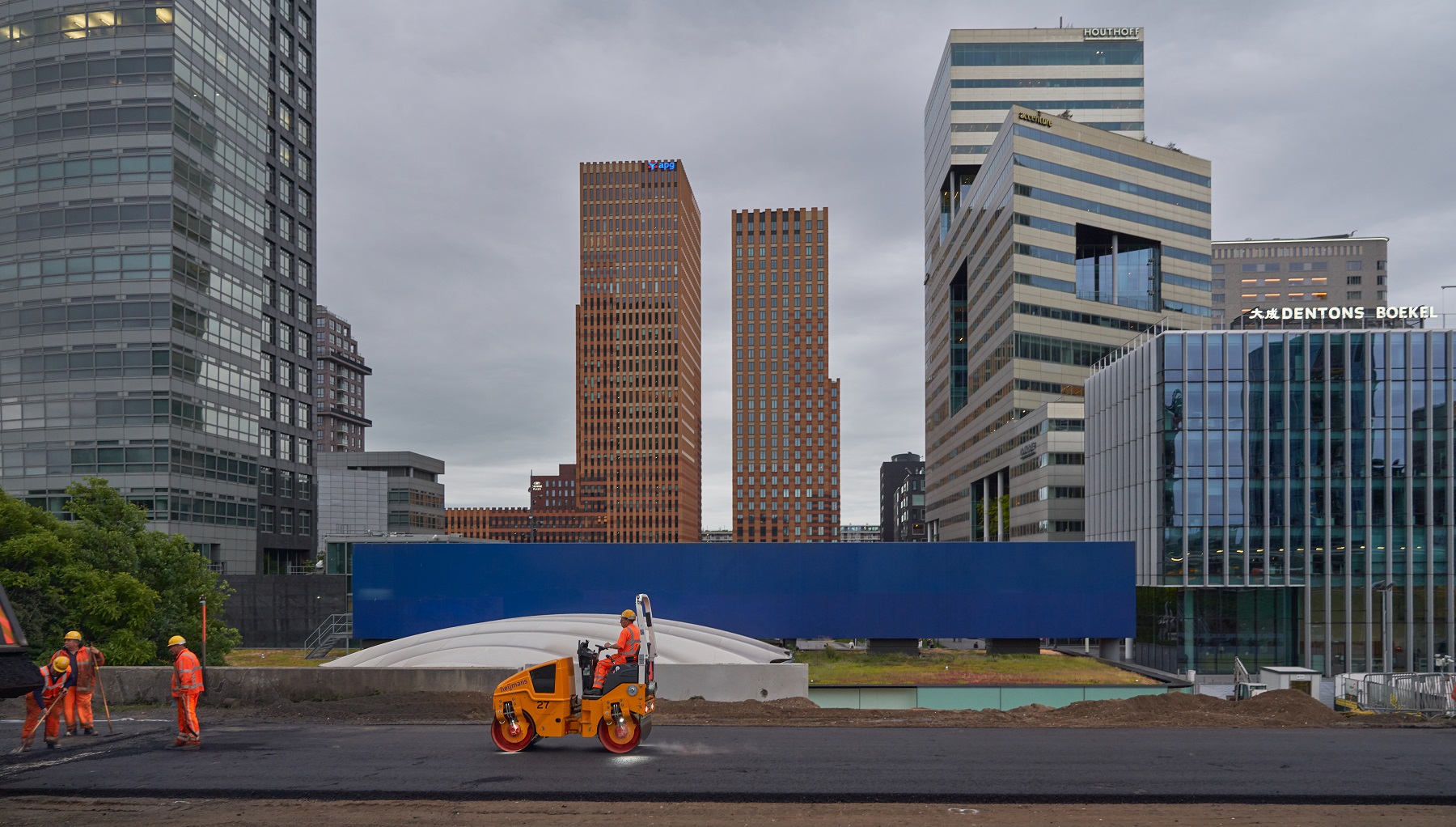