New Amsterdam Zuid station will be much easier to access 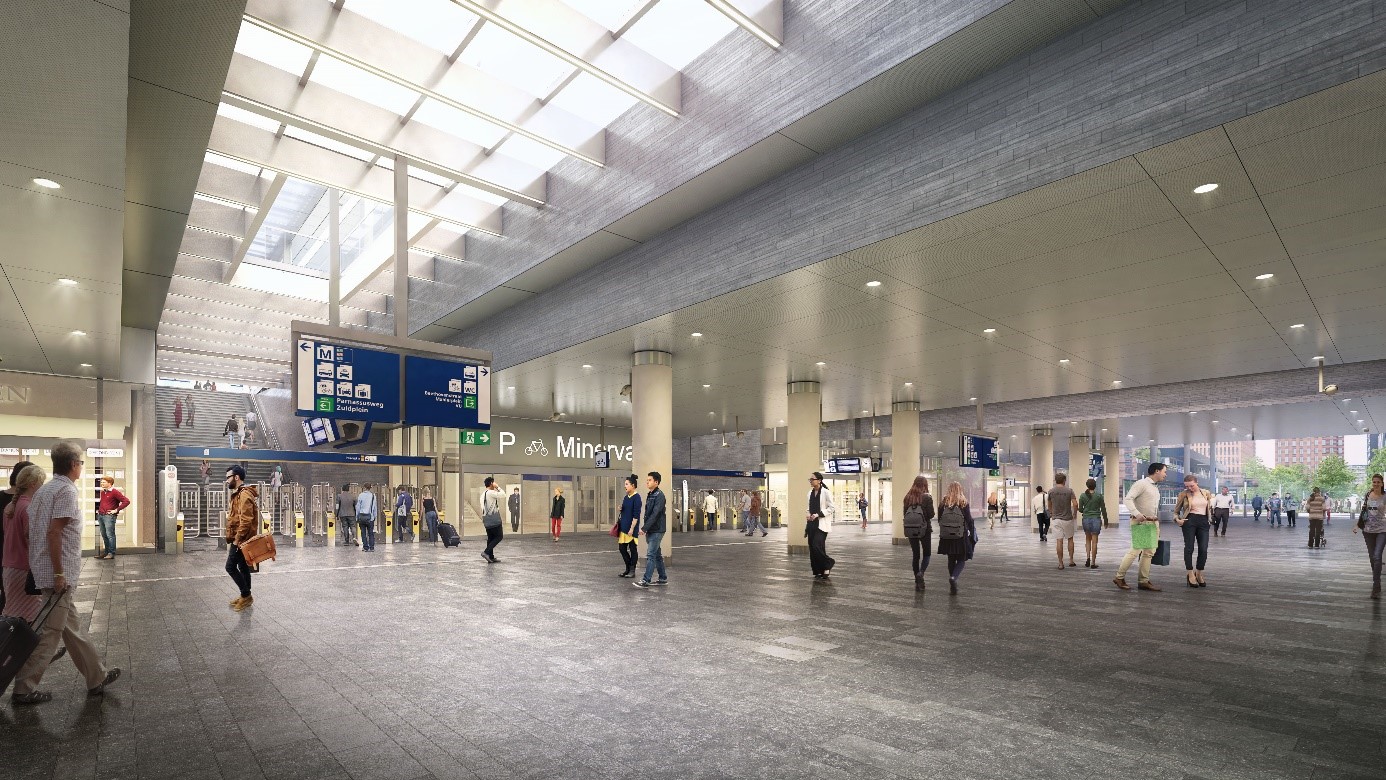 Anyone who has travelled to or from Amsterdam Zuid station by train or metro will know that every morning, there are too many people crowding onto the stairs and escalators to leave the platforms (at least before the pandemic struck). And at the end of the afternoon, the crowds are moving in the opposite direction, coming onto the platforms. This situation can be unsafe and is certainly far from ideal for travellers, so there must be no such bottlenecks in the new Amsterdam Zuid station. The existing entrance, the Minervapassage, will be made much wider: about 40 metres, compared to 12 metres at present. In addition, there will be a second pedestrian passageway: the Brittenpassage, which will be 15 metres wide. From these underpasses, travellers will need to move about 6 metres upwards to reach the platforms and take a train or metro. These stairs and escalators – or ‘access routes’ as they are known in the jargon – will make things much easier and more pleasant for travellers. In each underpass, there will be entrances to the train platforms on both the left and the right and an entrance to each metro platform on one side. The access routes for the metro will be located at each end of the platforms, because the existing metro platforms will be relocated. They are currently on the east side of the station, but in a few years’ time they will be located right between the Minervapassage and the new Brittenpassage. The train platforms, on the other hand, are much longer, and there will be multiple access points along their whole length.

Drawing of access route to metro platform, with stairs, escalators and lift located together 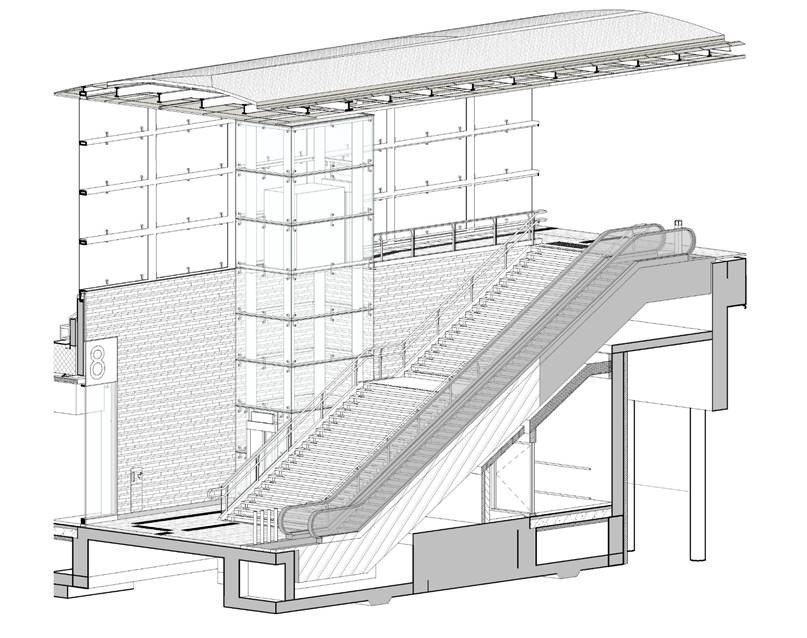 There was a lot to consider when designing these access routes. Of course, the main priority is that travellers can get to and from the platforms easily and safely. But the small amount of space available between the railway tracks make that quite a puzzle, says Frank Bouwman, project manager Architecture and Construction Specialist for Zuidasdok. ‘The access points for the train platforms cannot be too wide, otherwise travellers will not be able to get past them. So it isn’t be possible to group the stairs, escalators and lifts together on the train platforms. For the metro platforms that was possible, however. The access points are at each end of the metro platforms, so they can span the full width of the platform. Despite these differences, all the access points in the new station will be standardized and look similar.’

Drawing of access route to train platform, with stairs and escalators; the lift is located elsewhere 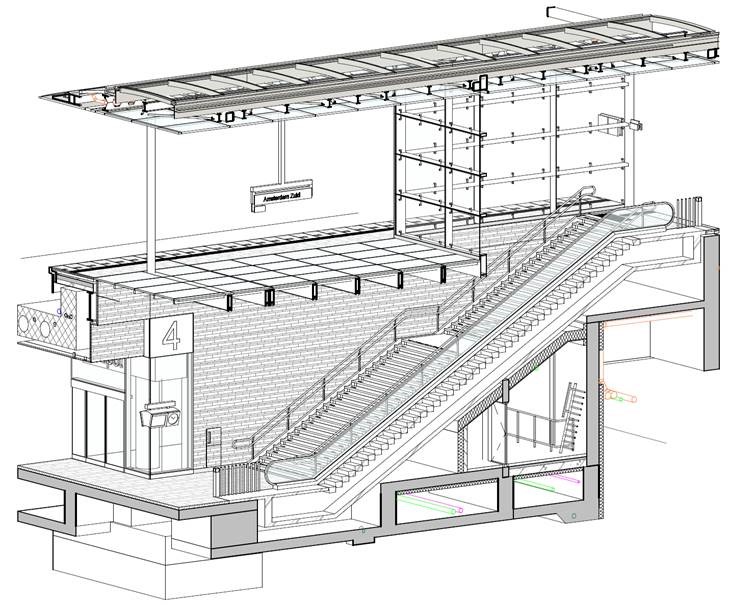 When designing a station, it’s important to see things from the perspective of the traveller. The very best designs help travellers to find their way to the platforms naturally and of their own accord – using daylight. Both the roof over the platforms and the floors of the platforms will allow natural light to pass through to the access routes below. ‘We know that daylight will help guide travellers naturally from the underpasses to the platforms’, says Bouwman. ‘Because people will know instinctively that they need to move towards the daylight.’ 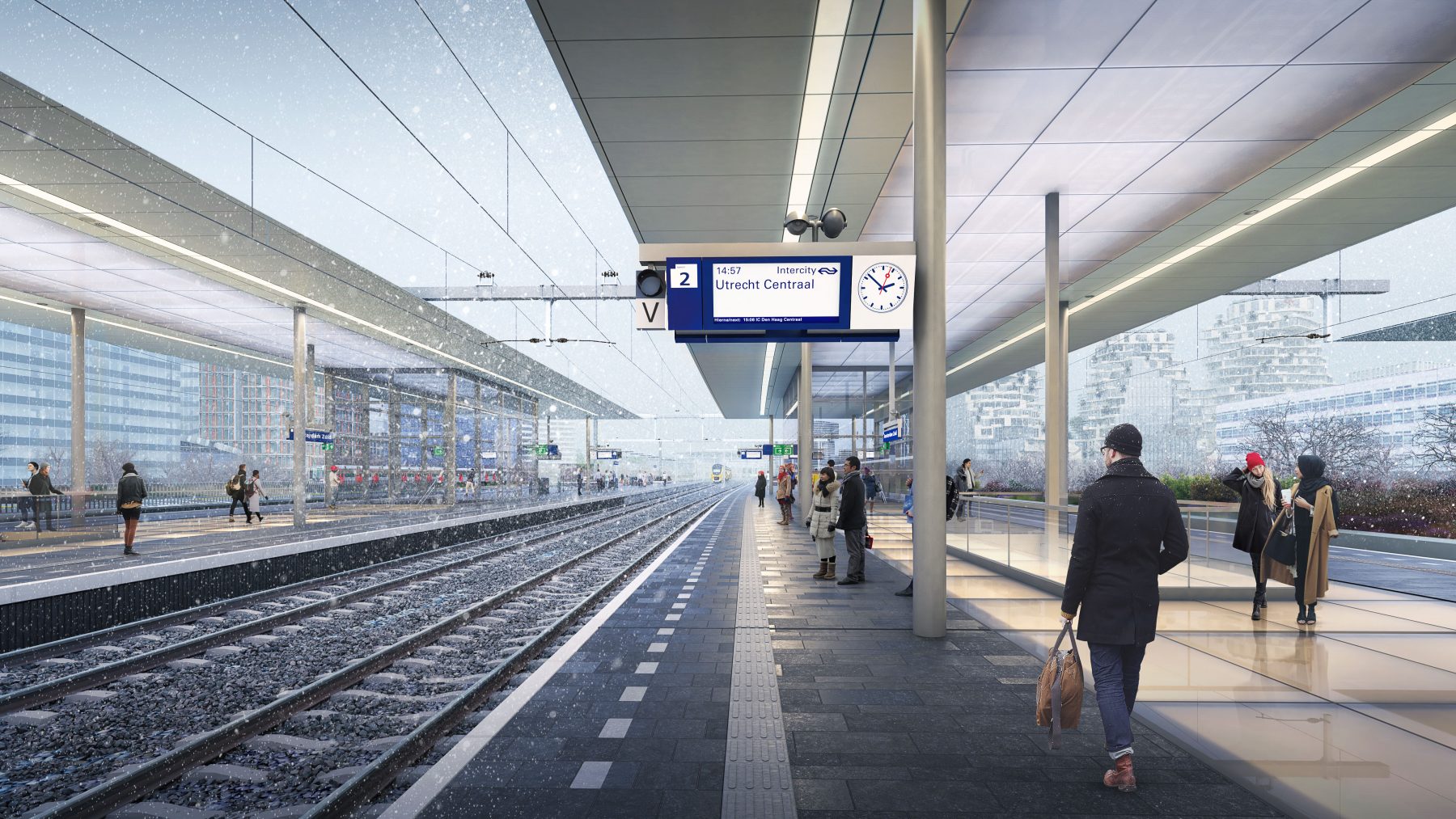 The access routes to all the platforms will be surrounded by glass bricks on three sides. That will create lightwells that extend all the way down from the platform roofs. This idea helped the designers to kill two birds with one stone. ‘Firstly, the glass-brick walls will provide shelter. They will prevent too much wind and ensure that the access routes stay dry. Secondly, the glass walls will form a connection between the platform and the platform roofs. That means we can use the vertical pillars to hide cables for lighting or speakers, for example.’ But the idea of the glass structures also led to a new design issue: maintenance. Because how can you keep the glass clean on the inside when it is up to 10 metres above the floor of the passage? To solve this problem, Bouwman and his colleagues took their inspiration from the North-South metro line, where maintenance work also has to be done at a great height at a number of stations. ‘They have successfully been using abseiling cleaners there. We have designed a system of rails in the platform roof above the access routes. Maintenance staff will be able to use those to keep everything clean while suspended from a cable.’

Artist’s impression of the new passageway 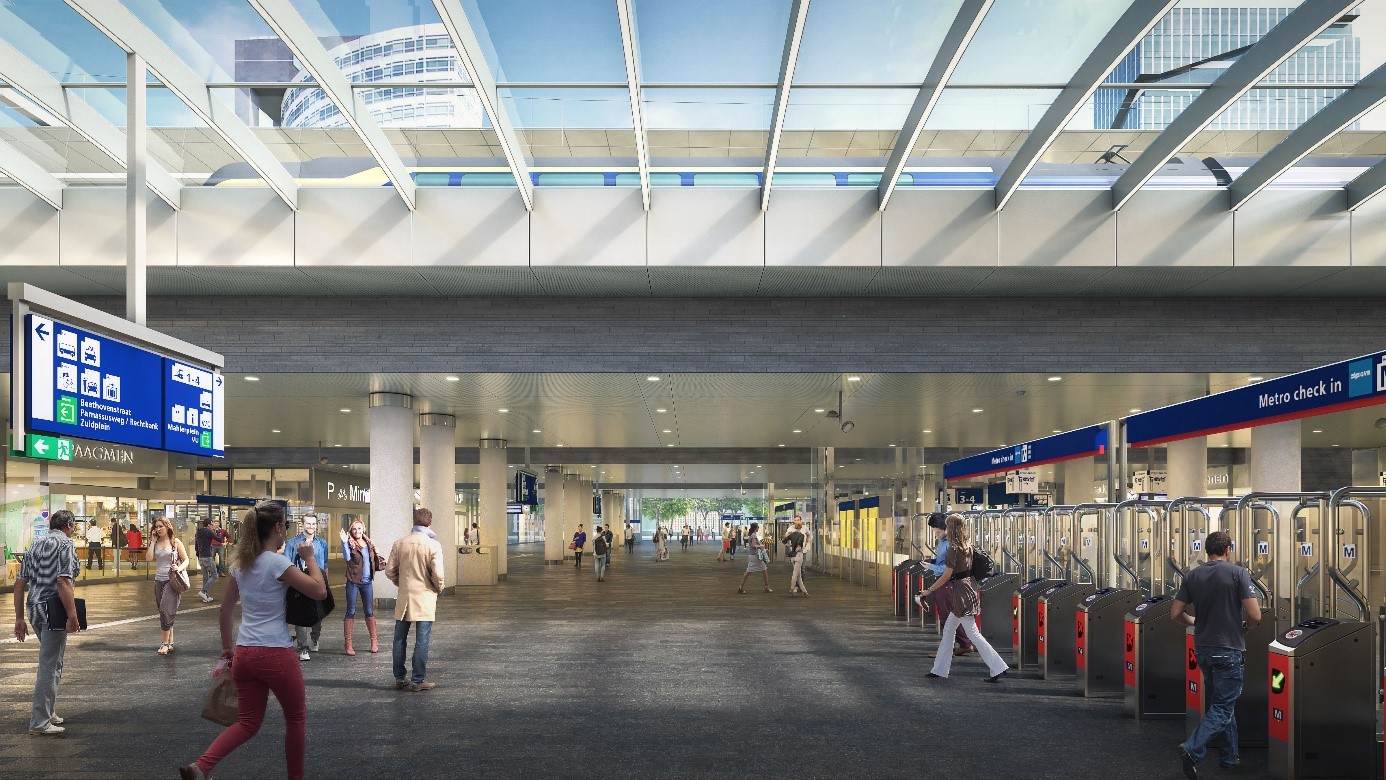 Designing the access routes between the underpasses and the platforms was about more than just aesthetics, says Bouwman. ‘But that’s what makes it so interesting. For example, it would have been nicer if the glass lightwells did not need to have horizontal profiles. After all, they are bound to collect dirt, partly because birds love to perch on them. But because those glass structures provide support, we had to incorporate horizontal surfaces too. The most important thing in the design process is that there is close teamwork between the architects, the designers, the construction workers, the track designers and the managers, right from the start. For example, together we have made sure that the access routes to the new Amsterdam Zuid station will not only do their job well, but also look great, keep travellers dry and sheltered, be easy to maintain and help to support the platform roofs.’

This is the second episode in a series about the work going on behind the scenes on the renovation of Amsterdam Zuid station. The first article was about the design of the pedestrian routes. Amsterdam Zuid station will become the Netherlands’ fifth largest station, after Amsterdam Central, Utrecht Central, Rotterdam Central and Schiphol Airport. How do you turn a mainly local station into a true public transportation hub?

Hi, something I haven't heard/read anything about is if the new station will have access from Beethovenstraat the same way it has access from Parnassusweg.

Hi Loer, No, the new station will not have access from Beethovenstraat. When the two passages are ready the entrance from Parnassusweg will also disappear, as the new Brittenpassage takes over its function.