Final design for the ‘green gateway’ at Kop Zuidas

The Kop Zuidas neighbourhood will get a new ‘green gateway’. It will be an exclave of the larger Hogelandplein and the design has now been finalized. We will start work on creating the green gateway at the start of 2023. 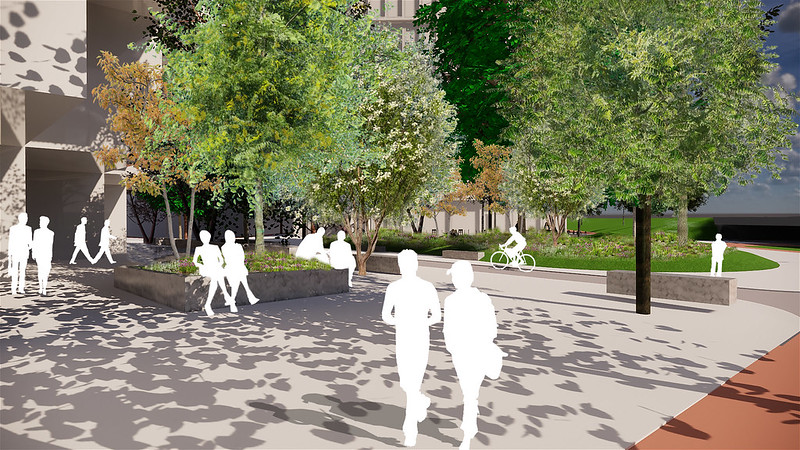 Right at the eastern end of Zuidas is the Kop Zuidas neighbourhood, which has Hogelandplein at its heart. But about fifty metres away, Hogelandplein will also have a little brother by the cycle tunnel under Europaboulevard, right outside the Crossover building. The design for this new green gateway has now been finalized. Construction work will begin as soon as the Crossover building is complete, in early 2023.

As a pedestrian or cyclist, you can follow a route from the Amstel on the eastern side of Zuidas that leads through the Kop Zuidas residential area and past the RAI all the way to Beatrix Park. All along this route, there are plenty of trees, shrubs and other greenery. However, at present, the green route is interrupted right in the middle. The area between the Zuidelijke Wandelweg and the Europaboulevard could use some more green space. The Hogelandplein, in the middle of Kop Zuidas, and the nearby green gateway will take care of this.

Green route from Amstel to Beatrixpark

‘Together, these two squares will form a “green hook”, which you can see very clearly when you look at them on a map’, says public space designer Alessandro Solci. The relatively large Hogelandplein provided the main features for the design. We asked local residents for their opinions. The result is a design that emphasizes organic shapes and greenery, and has a special water feature. The design of the smaller esplanade is based on the same ideas, but it is not a copy, Solci emphasizes. ‘Hogelandplein is really designed as the central local meeting place, with a water feature that children will really enjoy.’ The green gateway is less centrally located, on the edge of the residential area between two office buildings. It therefore has a different function to Hogelandplein. Solci: ‘It will be literally be a green gateway for Kop Zuidas, with an appearance that also matches the two adjacent office buildings. That is reflected in the choice of flowers, ornamental grasses and natural stone seating elements. The green gateway also blends in nicely with the public space around the nhow Amsterdam RAI hotel.’

View from the cycle tunnel under the A10

View from the cycle path next to Crossover 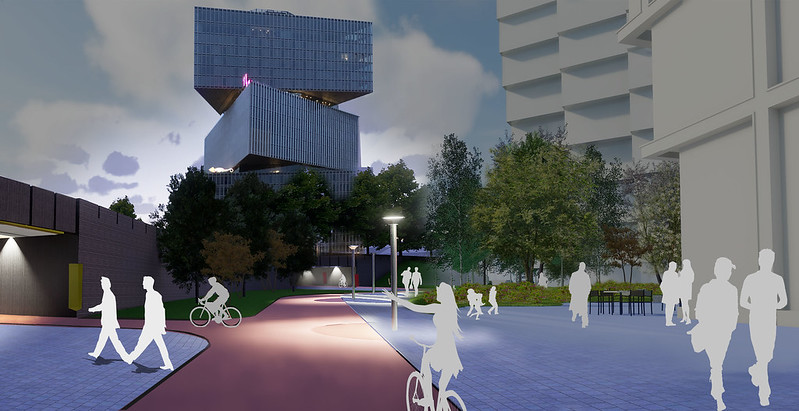 Final design for the esplanade at Kop Zuidas 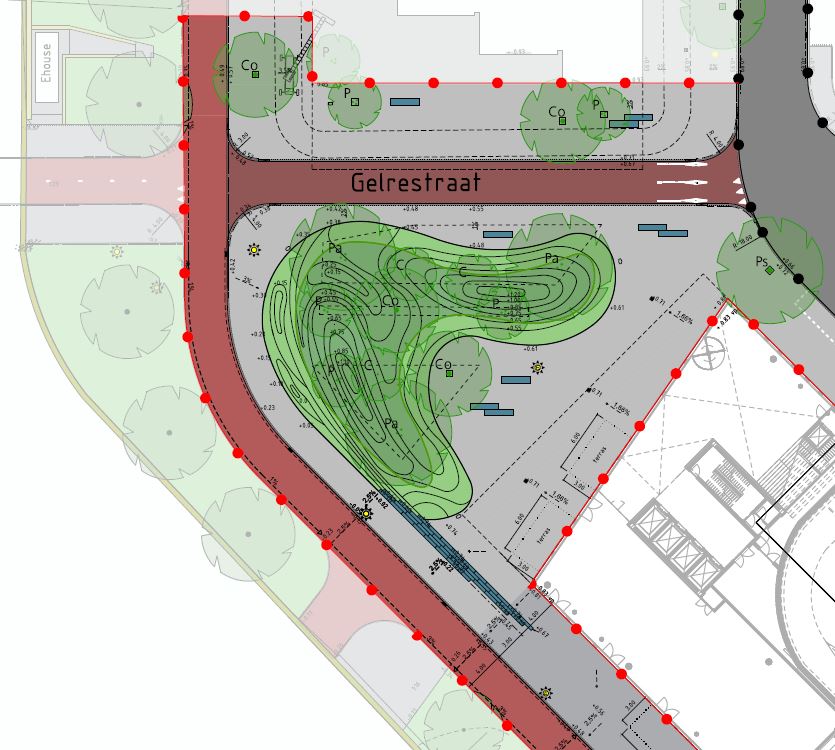 Help us think of a name on Dutch Building Day

This new green area has not yet been given a name. So why not visit Dutch Building Day on Saturday 18 June 2022 and help us to think of one? Our designer will tell you all about the development on the day at our central location in Hogelandplein. And don’t forget to sign up for the various different components of the programme, because there is much more to experience in Zuidas on that day.

Cycle tunnels at RAI get a make-over

The three bicycle tunnels around the RAI are getting a makeover. The tunnel under Europaboulevard will be closed between 30 April and 8 May. A diversion will be put in place for cyclists and pedestrians. The other two tunnels will stay open.
April 6, 2022

The Conservatorium van Amsterdam music academy will not be setting up an annex in the monumental buildings known as Kapel & Convict in Beatrixpark after all. Prices on the construction and energy markets have increased so explosively that the financial risks are too great.
April 5, 2022

Meeting about redevelopment of central section of De Boelelaan

The central section of De Boelelaan, between Beethovenstraat and Parnassusweg, is being redeveloped, adding a new green section and bringing changes to the traffic situation. A meeting about it is being held on Tuesday, 12 April 2022, both in person (fully subscribed) and online.
More posts