From Friday, 2 September until Friday, 21 October 2022, there will be further traffic disruption and potentially also noise nuisance in Beethovenstraat, between Gustav Mahlerlaan and De Boelelaan. This is because of works in preparation for the new Ravel residential district. 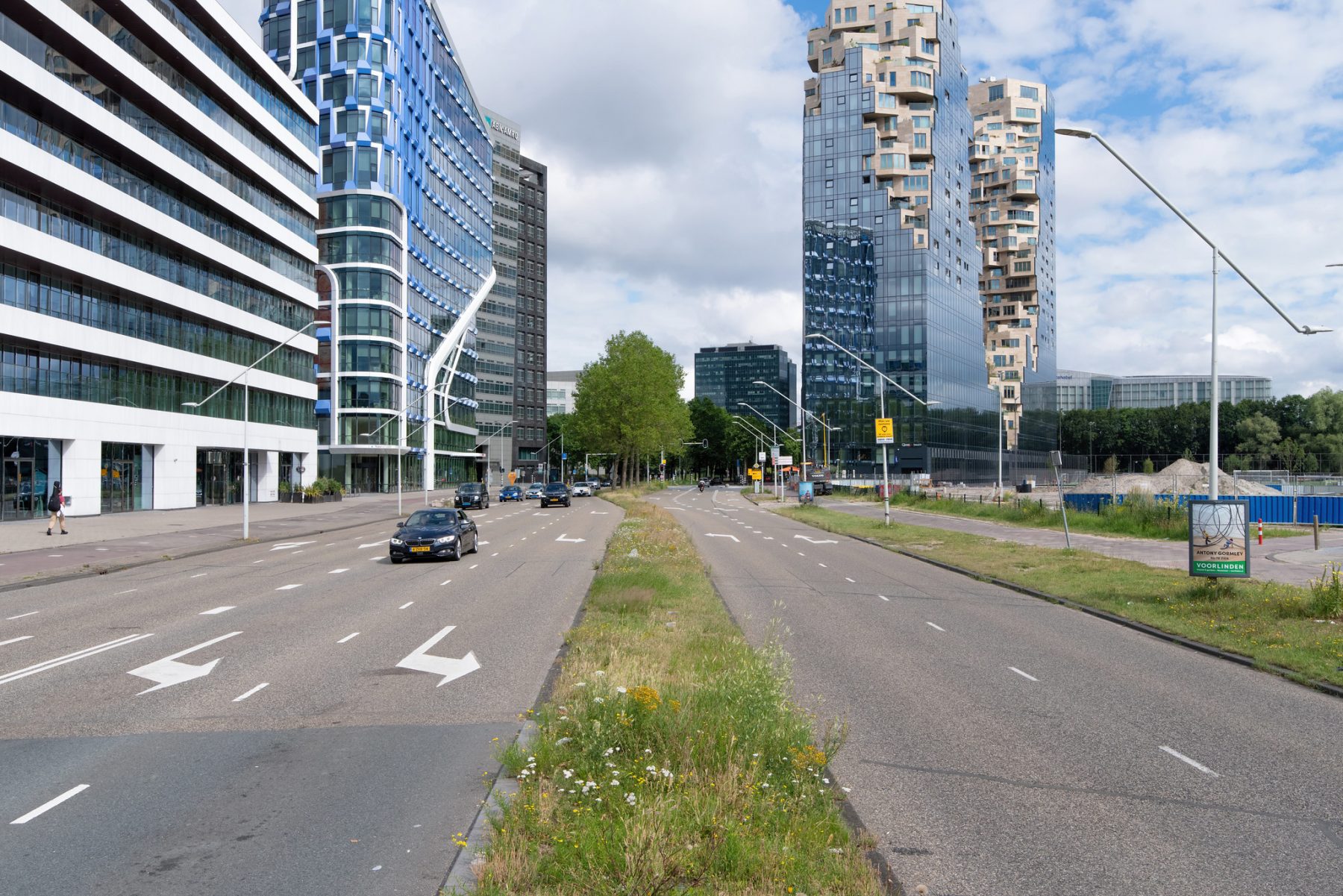 We reported earlier that a lot of cables and pipelines under the undeveloped site around the AFC football club are being removed in order to enable construction of the new Ravel residential district. The process of preparing the land for construction will take until September 2023. Prior to this, we are installing a new section of PVC cable ducting which network managers will use for electricity and telecom cabling. In the weekend of 27 and 28 August, we already laid some cable ducting for this new section in the ground underneath Beethovenstraat. We will be continuing this from Friday, 2 September until Friday, 21 October, between Gustav Mahlerlaan and De Boelelaan.

From 22.00 on Friday, 2 September until 05.30 on Monday, 5 September, we will also be paving the central reservation in Beethovenstraat and installing street lighting. By doing this, we are creating an additional lane that will be used by diverted traffic travelling in a northerly direction during the later works. During the roadworks, there will be a short period when only a single lane is available, on which a maximum speed of 30 kilometres per hour will apply. Cyclists will use the double-sided cycle path on the west side of the road between De Boelelaan and Gustav Mahlerlaan. We have removed the footpath on the east side of this part of Beethovenstraat 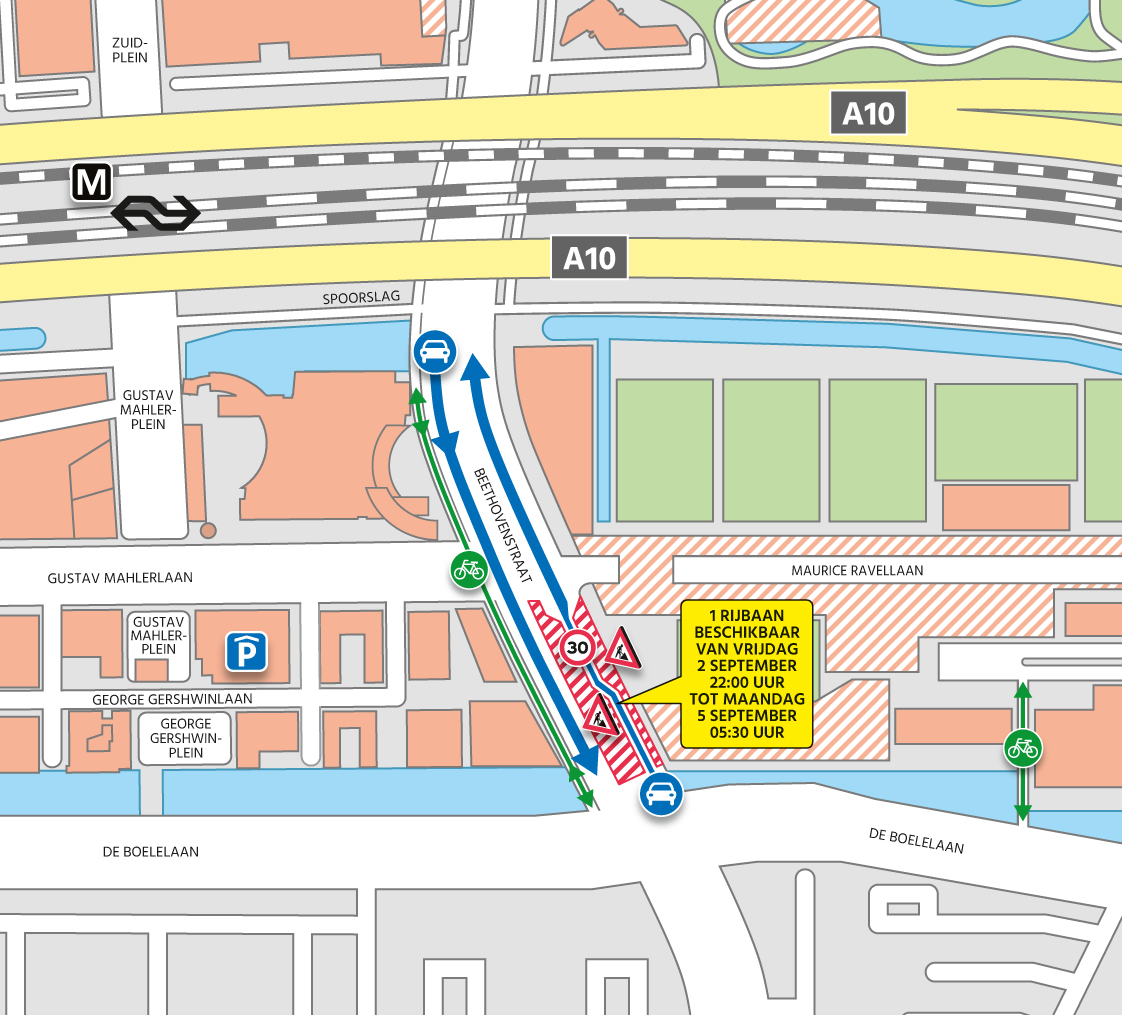 In mid-September, we will also be closing Hector Berliozlaan in the direction of Beethovenstraat. Instead, cyclists can use the new cycle path between Student Experience and Kindercampus Zuidas. This will lead them to the double-sided cycle path along De Boelelaan, from where they can cycle to the junction with Beethovenstraat. 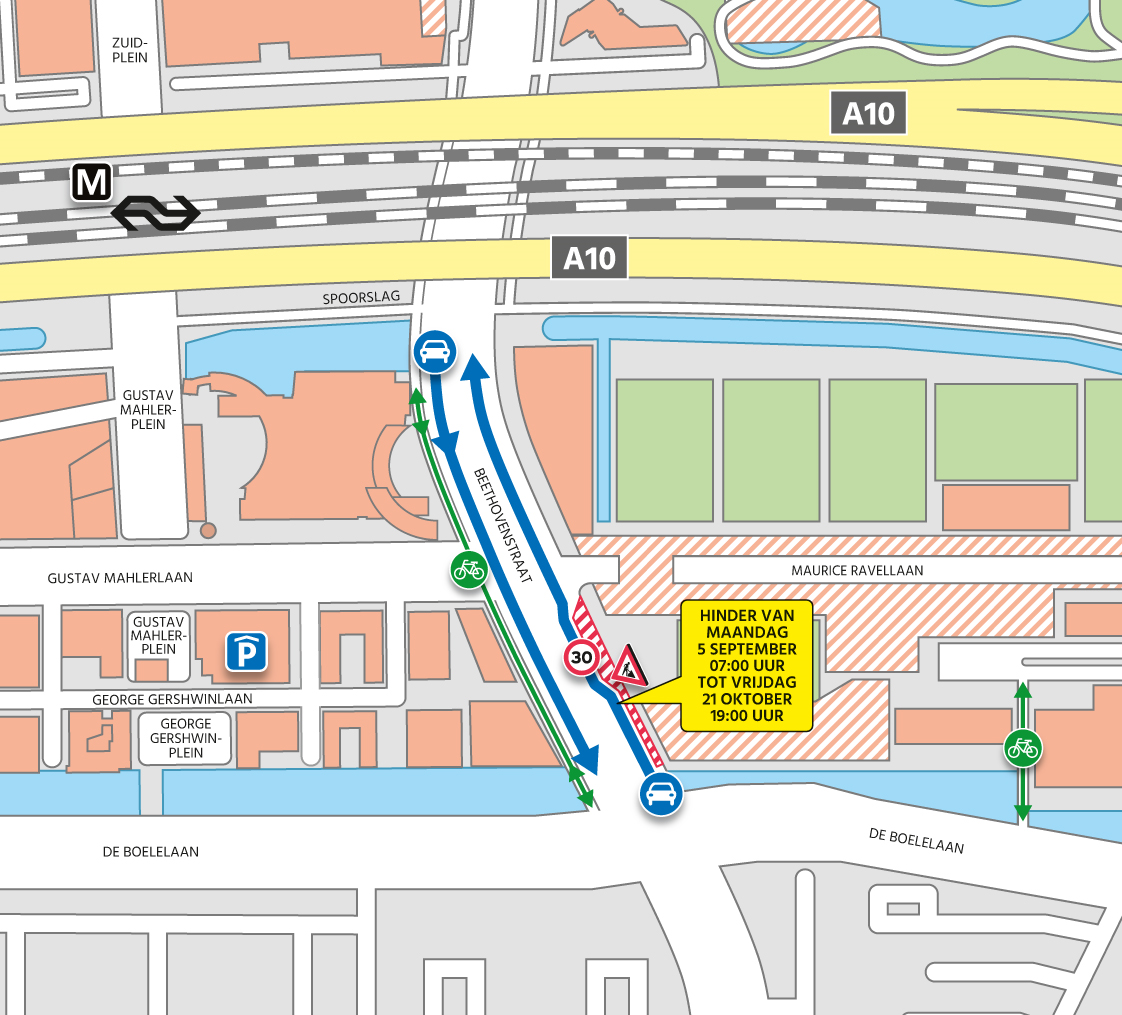 From 7.00 on Monday, 5 September until 19.00 on Friday, 21 October, we are installing eight lengths of cable ducting in the ground along Beethovenstraat. To do that, we will dig up the paving on the cycle path further along on the east side of Beethovenstraat between De Boelelaan and Gustav Mahlerlaan. For motorised traffic travelling north, two lanes will be available during this period, including the temporary lane in the central reservation. The 30 km/h speed limit will also apply. Cyclists will be diverted via the double-sided cycle path on the west side of the road.

In order to be able to supply energy to the new Ravel residential district, we previously connected part of this area to the MENZ route (MENZ is the Zuidas Energy and Utilities Master Plan). This is a loop-shaped network in which all the main conduits for electricity and glass fibre are positioned neatly alongside each other. This infrastructure will make it possible to connect all of the developments in Ravel to the utilities network without too much disruption. Later this year, we will continue installing cabling and restoring the traffic lanes. Further news will follow in due course.

Beethovenstraat closed because of works

From Friday 26 August, 2022 until 05.30 on 29 August, there will be traffic disruption and potential noise nuisance in Beethovenstraat, next to Valley. We are carrying out works in preparation for the new Ravel residential district.
August 5, 2022

From Sunday 7 until Sunday 28 August, we are carrying out works at Amstelveenseweg station. This will involve replacing the tramlines and renovating the metro stop, making it safer and more comfortable. It is expected to cause some disruption.
reizen-en
August 3, 2022

After an 11-day closure, motorists were once more driving on a fresh layer of asphalt across the A10 Zuid on the morning of Wednesday, 3 August 2022. There is no longer any sign that these major works even happened. A complex job has been completed with pride.
More posts