A green public transport hub at the heart of the city

A leafy green area where public transport and the urban environment blend into one. That’s the idea behind the design of the new station – or more accurately public transport hub – Amsterdam Zuid. What will it be like for travellers? 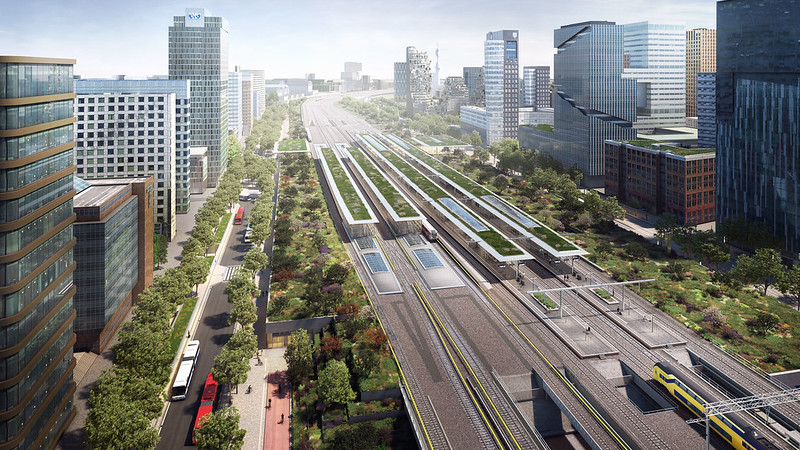 It has been much discussed and there has been plenty of moaning: Amsterdam Zuid station will not be an iconic building like Amsterdam Central. The train and metro platforms will each have their own roofs and the same applies to the bus and tram stops. This means that even in the renovated station, passengers will still be waiting outdoors for their transport.

‘Amsterdam Zuid is not really a station, but a public transport hub’, says architect Koen van Velsen. He is Zuidasdok’s most important architectural and spatial quality consultant. ‘That public transport hub is not separate from the city, but actually integrated within it. Public transport is an increasingly important part of city life. The two passageways running under the tracks are routes through the city. You’re not walking into a station, but through the city. And, of course, if you head upstairs from one of the passageways, you can catch the train or metro there.’ The essence of the design is the link between the public space and all the types of public transport. ‘This was what was behind the idea of having sheltered roofs for all the different types of public transport. Instead of what you often see: a station with a bus station at the front or back of it.’

The architects’ brief also involved adding as much green as possible to Zuidas. Something with a roof that covered everything was just not possible. One of the key challenges in the design was the unusual location of Amsterdam Zuid station: very low-lying, on the dividing line between two polders. Combined with a paved environment, this means that it’s difficult for rainwater to disperse. This has not gone unnoticed: in recent years there have been regular floods in front of the station entrance and in the passenger tunnel. ‘In the design, we opted for a permanent solution: the station and its surroundings need to be better able to retain superfluous water for a longer period to prevent placing too much pressure on the sewage system’, says Frank Bouwman, architecture and construction project manager. Instead of directly draining rainwater away, public space can hold onto it for longer. ‘The planted platform roofs work in a similar way as a normal garden, where the water gradually ebbs away.’

Not only will all the platform roofs be green, the same applies to the station’s surroundings. Especially since the A10 will also be disappearing underground. The green spaces not only retain water more effectively, but also boost biodiversity, creating an attractive place to spend time. All of this right at the heart of Zuidas. Bouwman: ‘Those green areas also help reduce heat stress: cities are becoming increasingly hot and we need to adapt our designs to ensure that places where a lot of people spend time become or stay cooler.’

Spending time on the platforms at the renovated Amsterdam Zuid station is set to be more pleasant than is currently the case. ‘The roofs are so wide that they stick out over the edge of the platform’, says Bouwman. ‘That provides extra comfort. There are also sheltered places on both the metro and railway platforms. These are the actual shelters on the metro platforms, whereas the train platforms will have pavilion-style waiting rooms and seating with wind screens. The platform entrances are surrounded on three sides by glass, protecting against wind and rain. For anyone who needs more: the new Brittenpassage and renovated Minervapassage offer extensive retail amenities. Because the station and its surroundings are so open, it will be easy to tell if you still have enough time to drop into the drugstore or need to move on quickly in order to catch your connection.’

While the A10 Zuid motorway is closed from 22 July 2022 onwards we are going to be vibro driving 80 sheetpiles into the ground which are needed for the Brittenpassage excavation work later on. This work may cause noise pollution. We invite you to attend the drop-in meeting on Tuesday 5 July.
June 22, 2022

Starting on 16 July 2022, major works will be taking place at and around Amsterdam Zuid station. In addition to road and track closures, people may also experience noise nuisance in the neighbourhood. Come along to the walk-in information meeting in the WTC on 5 July 2022.
June 21, 2022

In the embankment along the A10 West, next to Luchtvaartstraat, there are some very important cables and pipelines. They are usually underground, but in order to enable the updating of the De Nieuwe Meer interchange, they need to be moved and exposed to daylight. This is happening until July 2022.
More posts