Zuidasdok continues with work on the Amsterdam Zuid station passage

Building work on the extra passenger tunnel under Amsterdam Zuid station is set to continue. Work will commence in the night of Thursday 28 and Friday 29 May 2020, and trains and metros will resume normal service at 5.00 on Tuesday 2 June. It will be quite a logistical challenge. Watch the livestream starting Thursday evening. 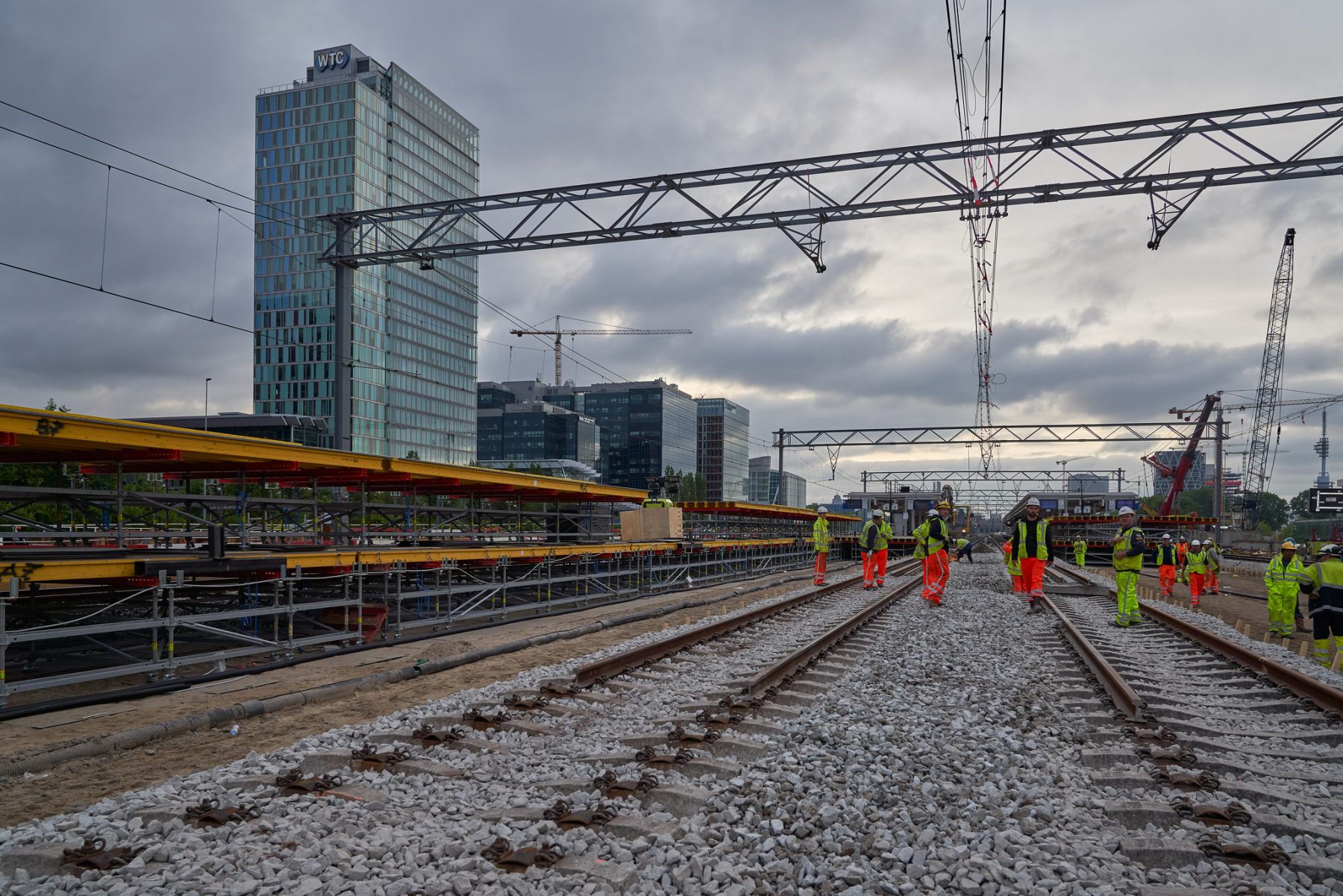 It might sound like routine work for us. Just one year ago, the ZuidPlus building consortium spent five weekends in a row laying the foundations for the Brittenpassage, the extra passenger tunnel under Amsterdam Zuid station. We also demolished a large part of the tunnel used by the former Amstelveen line, which had become disused. In the first weekend of November 2019, we eased the first section of the roof of the passage into place. So demolishing the A10, the platforms and the rails is nothing new to us, but the work planned for the coming bank holiday weekend is anything but routine.

ZuidPlus has issued all of the builders with hygiene and other safety instructions. They will be reminded of them when the work starts. Something resembling a party tent has been erected along Arnold Schönberglaan. It is big enough to allow people to eat and drink coffee at a distance of 1.5 metres from each other. Strict rules are also in place on the building site itself. Building process supervisors have been given the extra task of enforcing these rules. One of the main consequences of the new measures is that we have had to plan an extra day for the work: it is now 4 days instead of 3, as we’ve added Friday 29 May.

What will we be doing?

The main difference between the weekends in May and those in November 2019 is that this weekend, the A10 will remain open in both directions. Railway lines 1 and 2 will also be in use, as will most of the metro lines, but the trains and metros will operate restricted services. We plan to start the preparatory work at 22.00 on Thursday evening. After the last train (around 1.00 at night) and metro (around midnight), we will remove 200 metres of the tracks on platform 4 and the adjacent metro line 1, in front of the old Amstelveen line tunnel. Railway line 3 will also be taken out of service for safety reasons. Once this is ready, we will start digging and removing the earth.

In April 2019, 'the woodpecker' removed part of the Amstelveen line tunnel
Marcel Steinbach 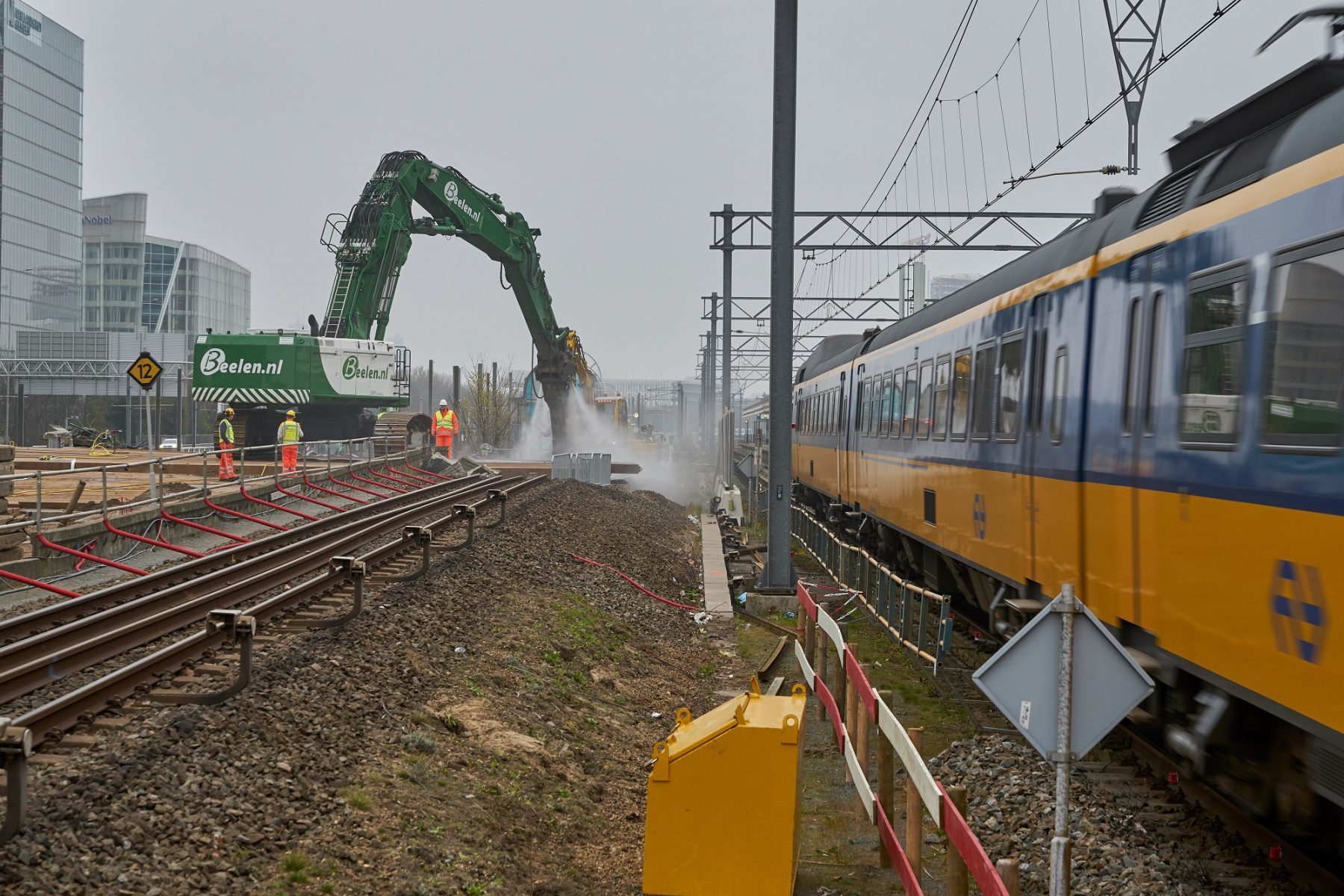 The ‘woodpecker’ is ready and waiting. This hydraulic demolition hammer will be used to demolish the last sections of the roof from the Amstelveen line tunnel. This is a particularly noisy job, which must be finished by 23.00 on Friday evening so that the worst of the nuisance will be over before night falls. We will use a ‘grabber’ to demolish the walls of the tunnel, as this is much quieter. The rubble will obviously have to be taken away, so lorries will be coming and going. While the tunnel is being demolished, the earth around the hollow piles driven into the ground last year will be dug out. These piles form the foundation for the Brittenpassage. We will measure them again to be absolutely certain that they are still in the right place.

The reinforcement cages will be delivered. These cages are made from interwoven steel rods, and they will be hoisted into the foundation piles using cranes. There are around one hundred piles. During the course of Saturday afternoon, we will start pouring concrete into the piles. We expect this job to carry on into Sunday. The logistical challenge will be to make sure that despite the cramped space, the materials will be delivered, and the rubble and sand removed, in the right order. We need to be sure that the delivery of the reinforcement cages doesn’t stall because of lorries getting in each other’s way.

May 2019: some of the foundation piles were given reinforcement cages
Marcel Steinbach

Once all the foundation piles have been reinforced with the steel cages and concrete, the sand can be brought back: the void left by the removal of the Amstelveen line tunnel must be filled, and the earth removed from underneath the railway and metro lines must be returned. After this, the rails can be laid again.

Bank holiday Monday will be all about rebuilding work. But that’s not all: in the night between Monday 1 and Tuesday 2 June, all the train and metro lines will be taken out of operation so that we can work on the overhead lines (train) and the power rails (metro). The rails are being shifted very slightly. Only a couple of centimetres, but it’s enough to require minor modifications to be made to the overhead lines and power rails.

Everything will be ready by 5.00 in the morning so that the trains and metros can resume normal service. Like nothing even happened.