With work now finished on the 2Amsterdam office tower, the transformation of one of the oldest buildings in Zuidas is complete. Although the former Twin Towers no longer both serve as offices, they still unmistakably form a single unit. 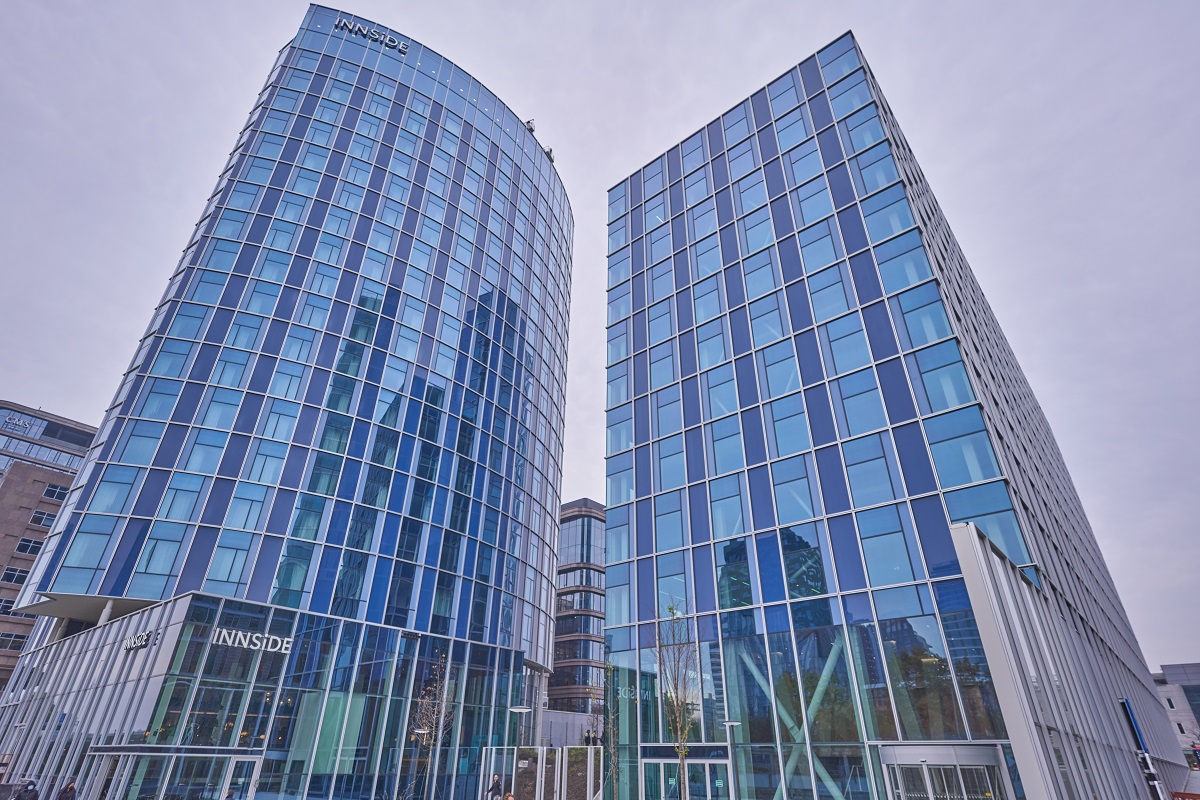 On the otherwise smoothly-plastered white wall on the ground floor, an irregular strip of concrete catches the eye. This metre-long strip runs width-ways and is inset slightly deeper than the plasterwork. One would logically assume that some kind of system or installation is to be be hidden away here, possibly a lighting strip. Nothing could be further from the truth. ‘What you can see here is a glimpse of the old floor of the tower’, says Martijn Houwen from Commerz Real, rubbing his hand across the rough surface. ‘In the original building, the ground floor was slightly higher than it is now. The architect came up with this idea, as a playful way of maintaining a link with the building’s past. We call it ‘traces of the past’.

'Traces of the past', the visible old concrete floor
Marcel Steinbach 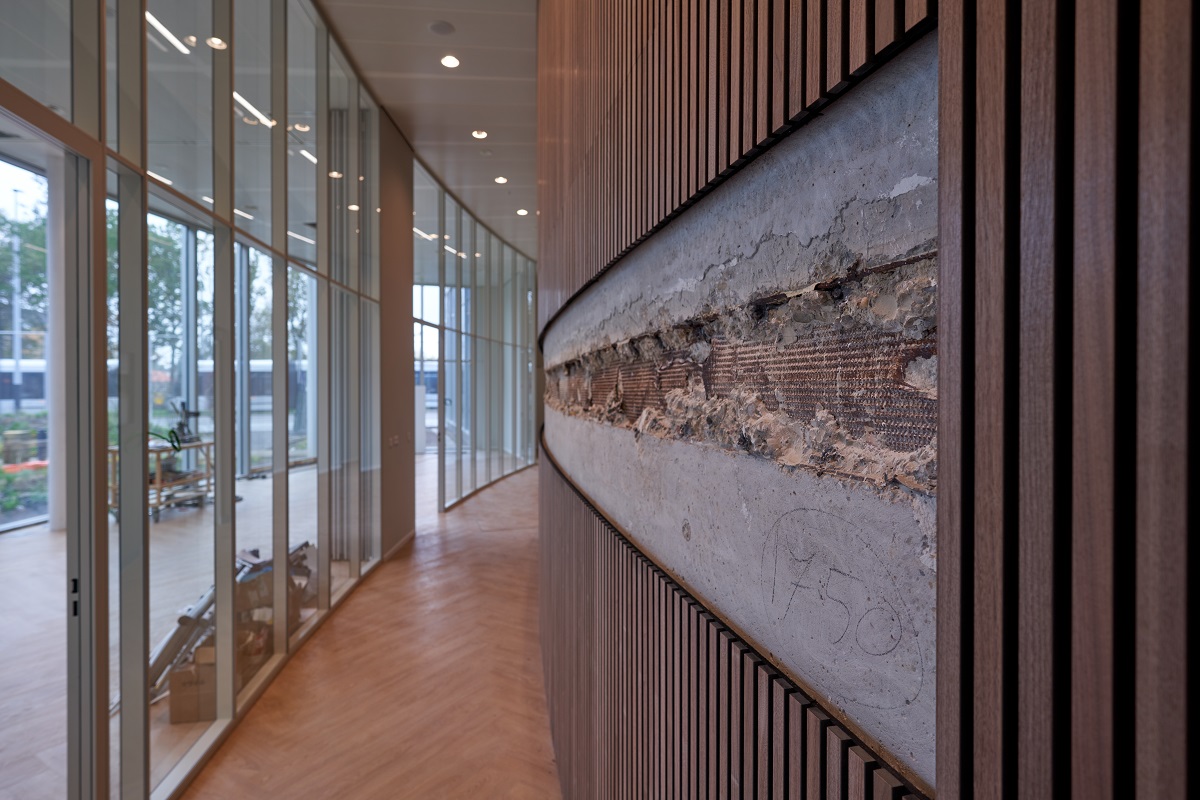 The history of the towers, previously known as the Twin Towers, goes back to the 1980s, when construction work started on the building. In 1992, lawyers’ firm Stibbe moved in and the building, located at the heart of Zuidas, soon became known as ‘The Stibbe Towers’. From 2007 onwards, other co-tenants moved in, including AkzoNobel. In 2016, the companies all started relocating to new offices along Beethovenstraat and the landlord Commerz Real and property developer Provast seized the opportunity to breathe new life into the buildings.

There is little left to show that we are in one of Zuidas’ oldest buildings. The office tower meets the latest sustainability standards and has been awarded the BREEAM Excellent certificate. ‘The building is equipped with a smart building system that uses sensors’, says Houwen. ‘They record data such as temperature, air humidity, movement and CO2. People working there can control everything in the system using an app: not only can they adjust the climate, they can use it to enter the building or book a conference room.’

The entrance, shortly before completion 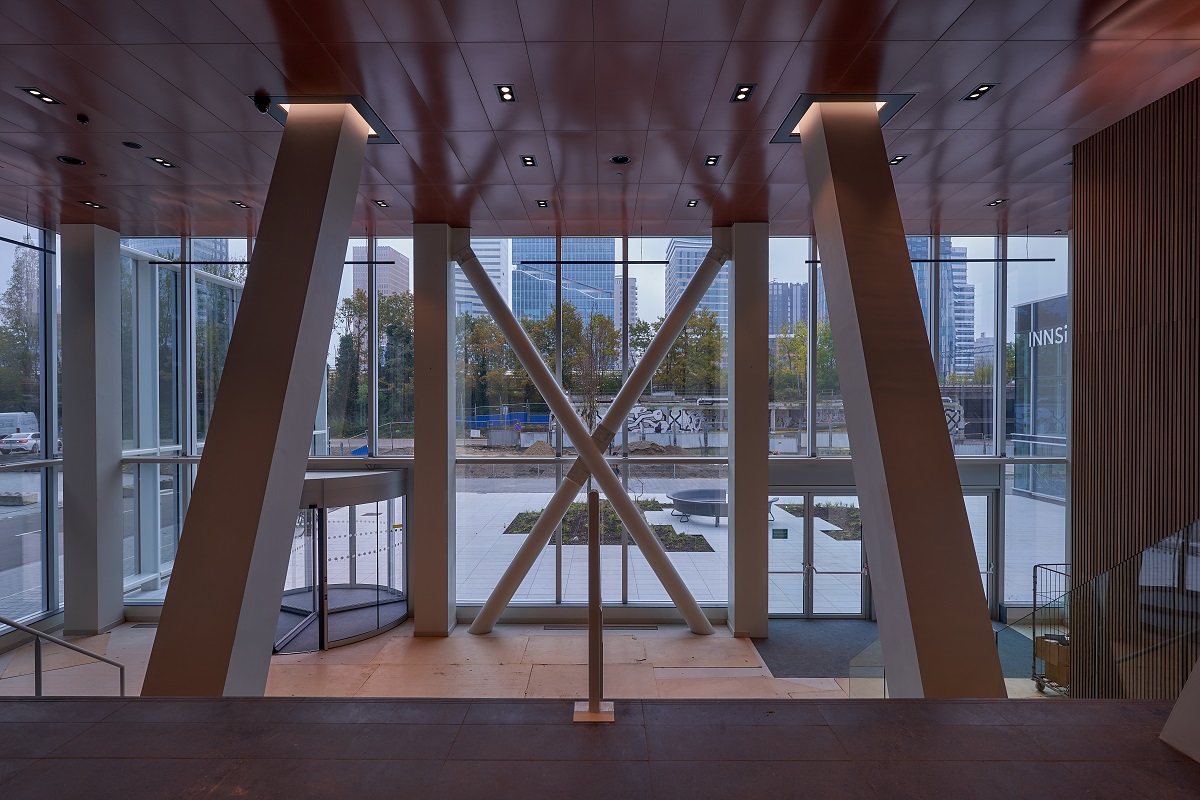 Although the tower maintains its original function, it has been significantly expanded. A further 11,000 sq. m. have been added, making a total of 20,000 sq. m. The building also features a thermal storage heating system, climate roofs and LED lighting. There are beehives, green roofs and 168 solar panels. The two highest of the total of 16 floors have now been let, with tenants that include Norton Rose Fullbright. In the other 2Amsterdam tower, the Spanish hotel chain INNSiDE by Meliá opened its doors a year ago. 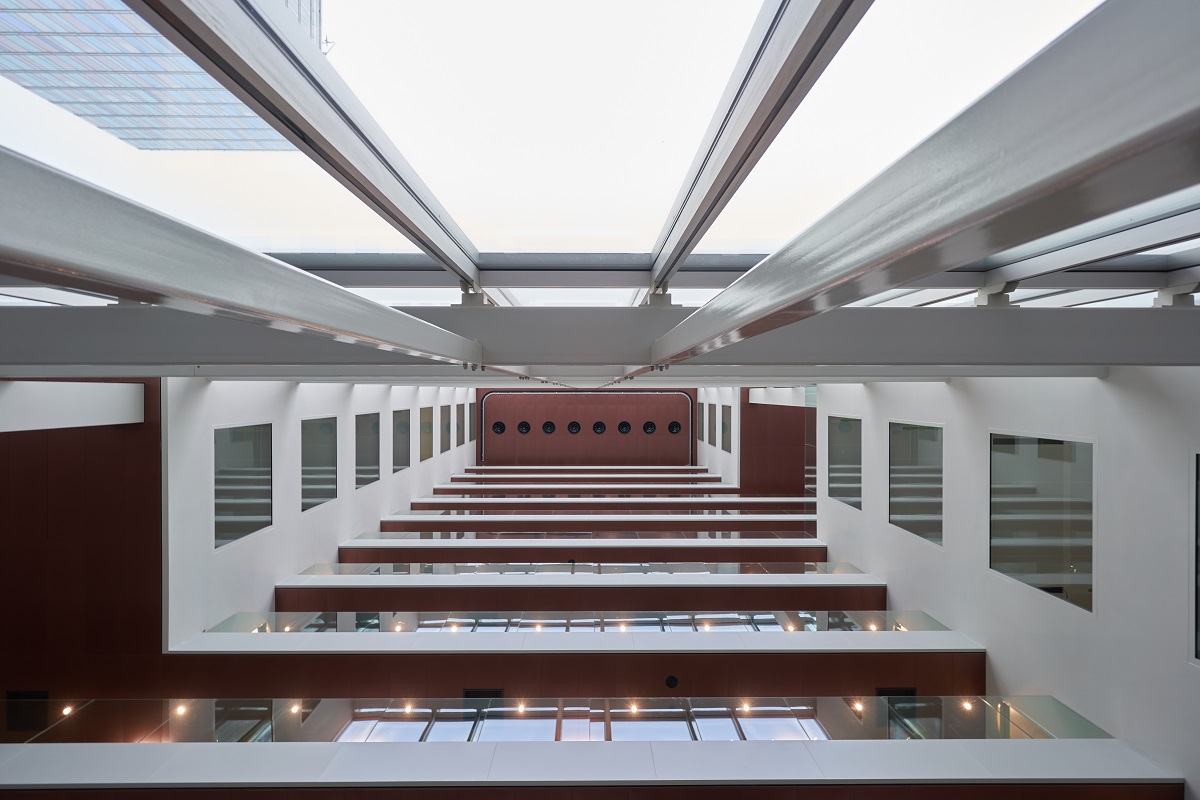 Although the Twin Towers no longer both serve as offices, they still unmistakably form a single unit. ‘That’s partly because of the continuous glass façade’, says Maurits van Schaik from Commerz Real, who has joined us on our tour. ‘And the outfitting of the ground floor, referred to as the plinth. For the interior, a Scandinavian look was chosen, featuring materials such as wood, warm hues and warm light. That look is also replicated in the office tower, but in a slightly more business-like way.’ The ground floor of the office tower will have a coffee bar, fitness room, communal meeting rooms and plenty of seating.’ Van Schaik points to the adjacent semi-public courtyard garden that connects the towers to each other. ‘It will take a while yet for everything to grow and come into flower, but it promises to be a really luscious area of green in Zuidas. I can even envisage people walking to the courthouse from the station opting to use the path through the garden.’

The courtyard garden, between the hotel and office 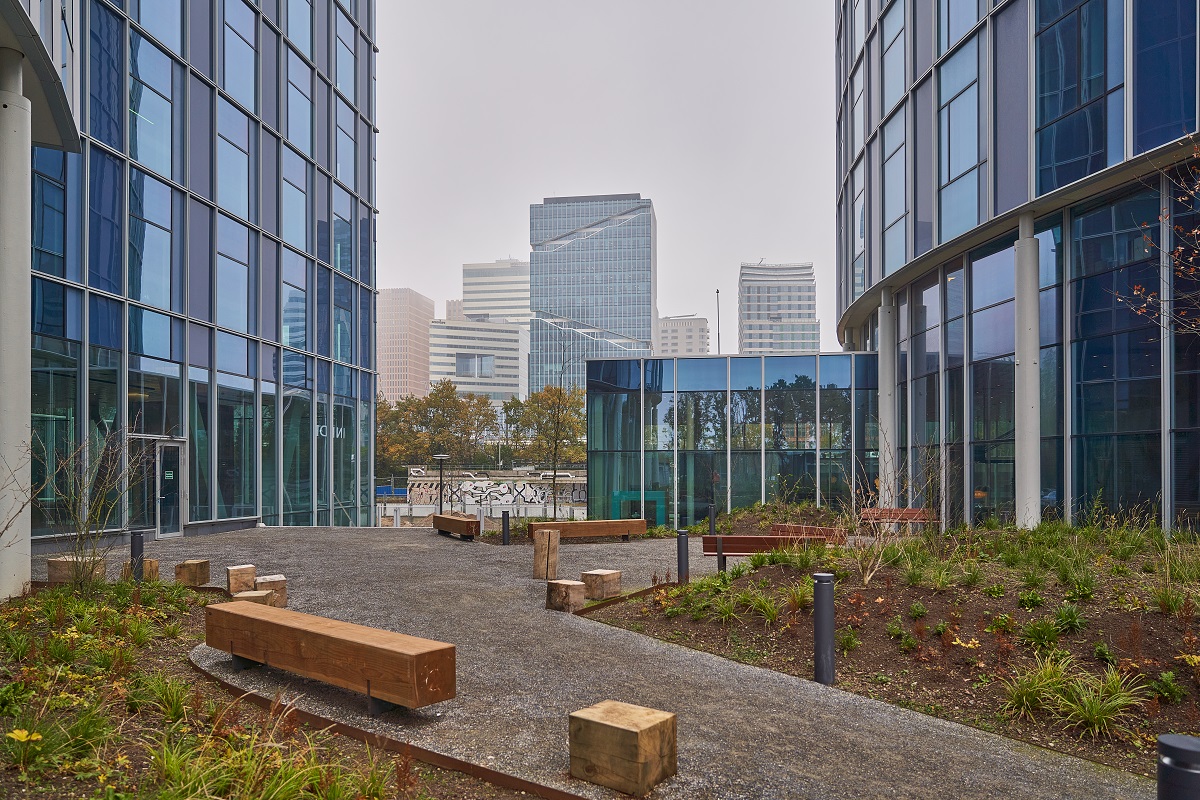 Transforming two massive outdated buildings into a hypermodern hotel and office tower was not without its challenges. Adding the three-storey underground car park underneath the office tower was a particularly difficult job. ‘The old Atrium garage on the other side had to be removed years ago for the construction of Zuidasdok. That’s why the decision was made to create parking underneath the tower’, says Gert Jan van Amerongen from developer Provast. ‘When digging out the construction pit, we noticed that the building was at risk of becoming unstable. We had to insert steel piling 20 m deep in order to prevent that happening.’ When drilling underground, the construction workers hit upon a surprise: tieback anchors. ‘A kind of sideways foundation pile’, explains Van Amerongen. ‘They’re similar to tent pegs, but more than 6 m in length. Initially, we were unable to continue building the garage. They were eventually removed, but the process took around a year. That caused a delay to construction.’ 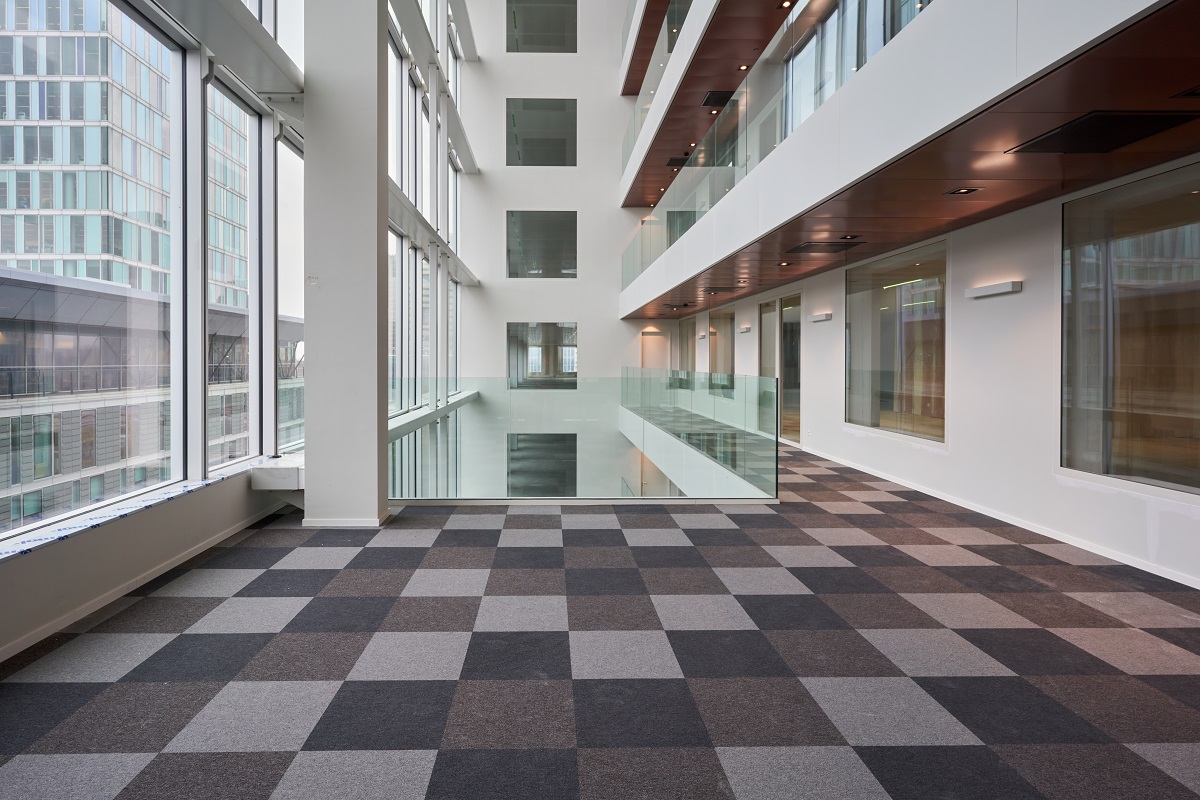 The new car park will include 376 parking spaces for cars, with around 45 electric vehicle charging points. There will be 680 bicycle parking spaces, 120 of them electric. ParkBee will operate some of the parking spaces. As a result, 2Amsterdam will not only be accessible for office workers and guests, but also people from the immediate neighbourhood and visitors to the hotel, restaurant and cocktail bar.

Later in the year, construction work is expected to start on Well House, one of the world’s tallest wooden office towers. We talked to offices investment company NSI about the design, wooden construction, working in a post-Covid era and even about 'spekkoek' (a type of layered cake).
April 11, 2022

Copper heart glistens behind the glass of EDGE Stadium

The new exterior of EDGE Stadium, former headquarters of Loyens & Loeff, is more or less complete. As a result, the characteristic copper heart of the building in Fred. Roeskestraat is suddenly behind a transparent façade.
March 30, 2022

The Amsterdam City Executive has approved the development plan for the area to the east of The Edge. This makes it possible to build housing, together with amenities and offices, set in a calm and green courtyard garden.
More posts