After the major work that was completed in July and August 2022, the modernization and expansion of Amsterdam Zuid station continues to make rapid progress. We will now continue working on the new Brittenpassage, as well as on the existing Minervapassage. Passengers and local residents will notice the effects of this. 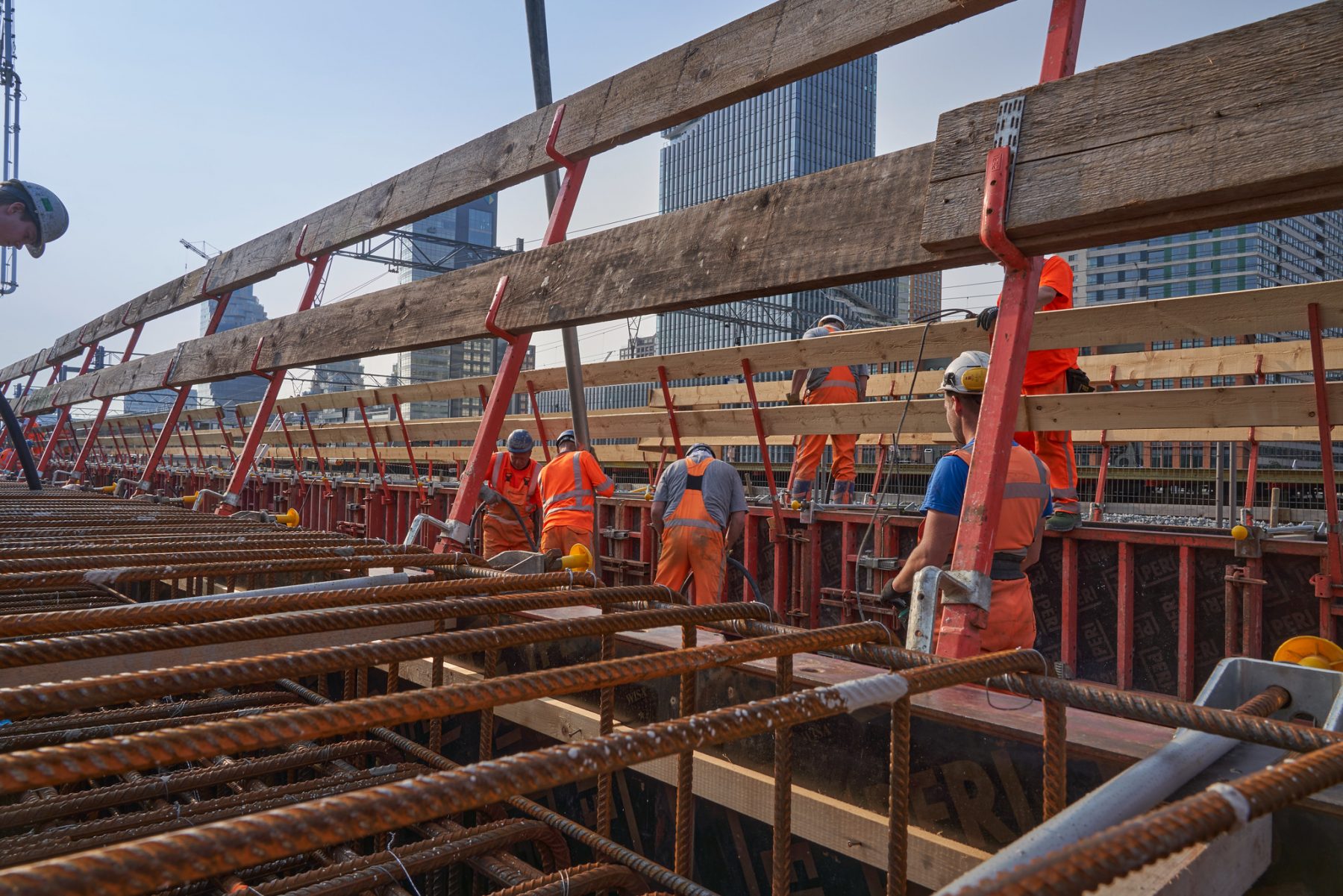 It’s full steam ahead for the Nieuw Zuid construction consortium. The summer is hardly over and we have already started work on the construction of the new passenger underpass (the Brittenpassage) and on renovating the existing Minervapassage. This work is part of the wider upgrade of Amsterdam Zuid station, which is necessary to cope with current and future passenger numbers. The new-look station will also be much more comfortable to use. There will be shops and a bicycle parking facility in both of the underpasses. Let’s take a look at what is in store between now and summer 2023.

Most of the work will involve building and installing the remaining roof sections for the Brittenpassage, the new 15-metre-wide passenger underpass for Amsterdam Zuid station. We will also continue to work on the Minervapassage, the station’s existing passenger underpass. Eventually the Minervapassage will be 40 metres wide – compared to just 12 metres wide today. But we can only do this if we make the roof of the underpass much wider. In 2023, we will put the first sections for the new roof in place.

A lot of preparatory work has been done behind the scenes in recent months. To make space for the construction of roof sections, we have extended the existing metro platforms and tracks for line 52 towards the east (Beethovenstraat). At the same time, we have raised the metro tracks and platforms. That was necessary because the ceiling of the Minervapassage will be higher in the section under the metro. Currently, the ceiling in that section is lower than the rest. The new Minervapassage will be a really spectacular space, not only because of its generous width, but also due to the height of the ceiling.

Marcel Steinbach
The larger construction site between the metro tracks 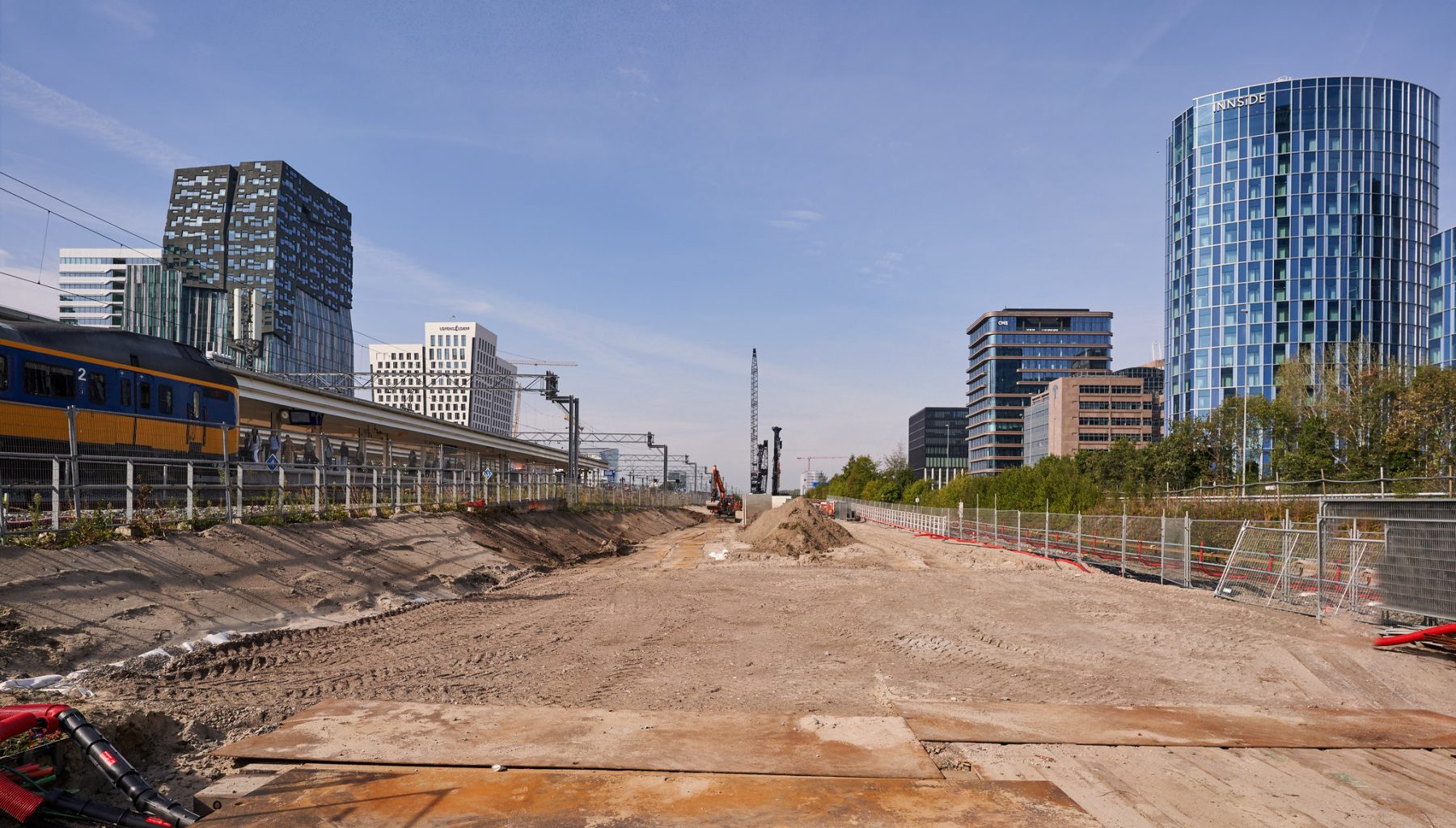 The first roof section that we will build for the Minervapassage will support the tracks for metro line 52 (for enthusiasts: M3 and M4, see map). In the spring of 2023, we will move it from the construction area to the east, over the Minervapassage. That work will certainly not go unnoticed. After all, the underpass is used by thousands of people every day. Once that roof section is ready, we will build another roof section in the same place (to support M1). Putting this in place will be a complex operation: we will first need to move it from west to east and then slightly from north to south. This will be done in a three-week period in the summer of 2023. Once it has been done, the roof of the new Minervapassage will be in place for three of the four metro tracks. 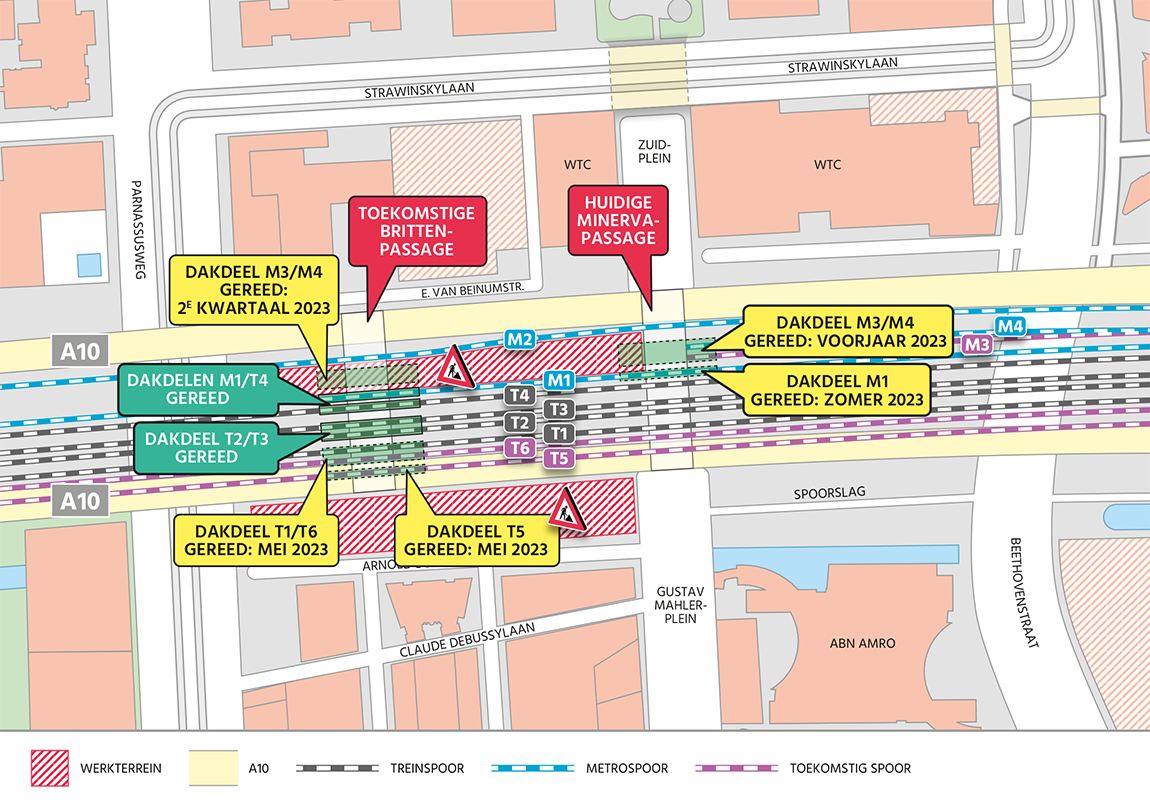 In the same construction area, but a little further west (towards Parnassusweg), we are also continuing to build the new Brittenpassage, which will be the second passenger underpass at Amsterdam Zuid station. We have already built two of the roof sections for the Brittenpassage there, which were put into place in August 2021 (under T4 and M1). Now we are going to build a larger roof section for the Brittenpassage (for under M3 and M4). Because we have removed these metro tracks temporarily, we will not need to move this roof section into place: we can build it right where it belongs.

All construction areas being fully utilized

The area between the metro tracks is not the only construction area available to us. The other is on Arnold Schönberglaan, just south of the A10 motorway, where we built the first roof section for the Brittenpassage back in 2019. That was a huge roof section, as it supports two train tracks (T2 and T3). We will be building two more roof sections in this same area in the near future. We laid the foundations for this last summer, under the A10 and the railway. The roof sections that we are going to build next will support a train track and the two extra train tracks that Amsterdam Zuid station will have in the future (T1/T6 and T5). We will not build these tracks ourselves, but we are preparing for their arrival. In May 2023, we will slide these two sections from the construction area to their final location. 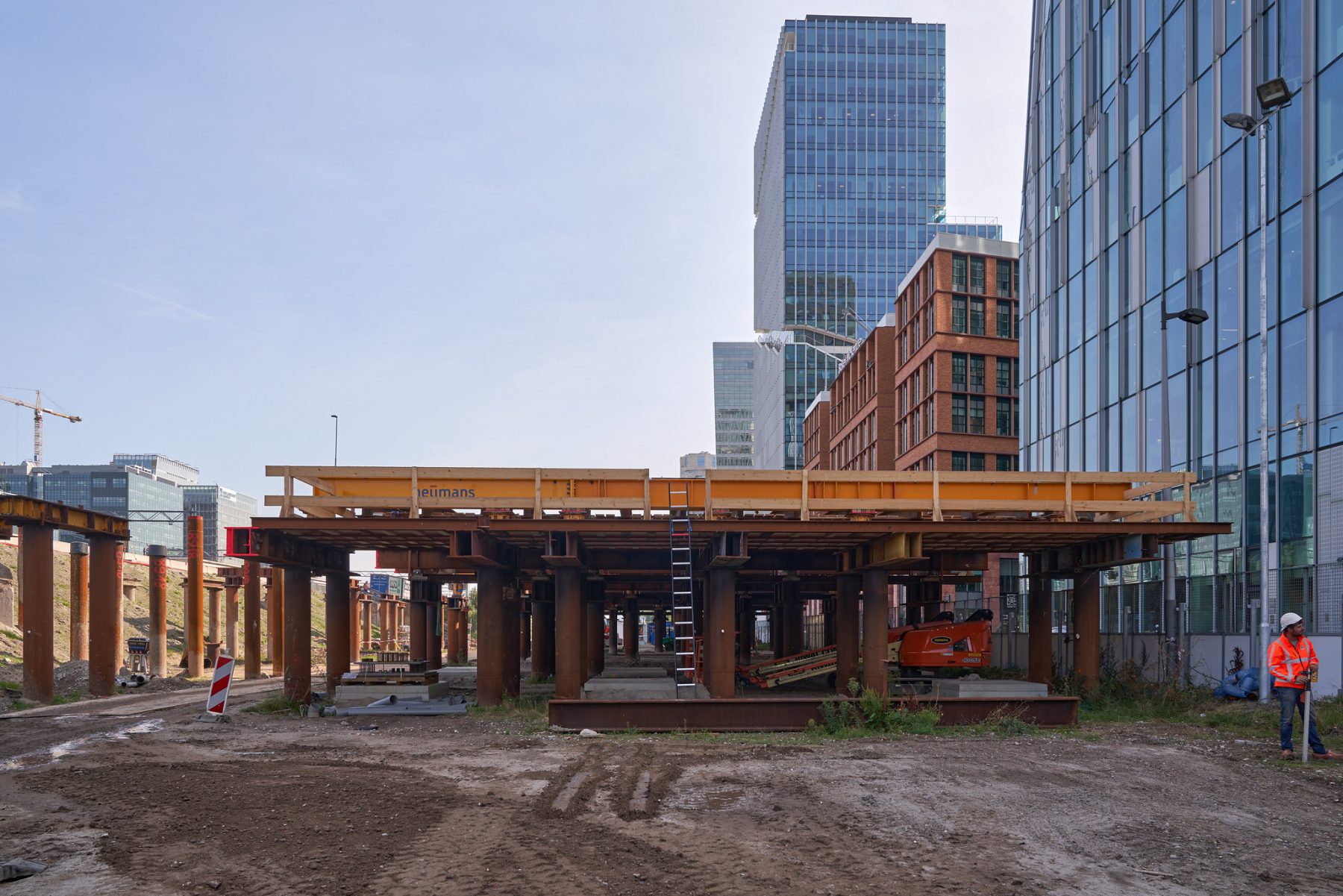 You may have forgotten, but there will also be a cycle and pedestrian tunnel between Antonio Vivaldistraat to the south of the A10 and Beatrixpark on the north side. We announced this tunnel four years ago. The first steps in constructing this tunnel were taken in 2019 by the then construction consortium ZuidPlus. We will now continue that work by building sheet piles and apply foundation piles. By May 2023, we will be ready to build the abutments. We already built the first roof section for this tunnel back in spring 2019, but we were unable to slide it into place at the planned time. This will now be done during the Whitsun holiday in 2023.

For the next few months, the focus will be on foundation work. We will remove old sheet piles and install new ones at various locations on the construction site. These sheet piles are needed in order to create a cofferdam. They retain the water and the soil. And before the end of the year, we will also be moving a roof section next to the A10 motorway (T1/T6) in order to make space to build a second one (which will support T5). We will of course keep you updated with more details in due course.