Pauline takes up residence in The Gustav

Following two years of construction, the residents of The Gustav are now being issued with the keys to their apartments on a floor-by-floor basis. Thanks to an active group app, most of them already know each other. ‘It already feels familiar’, says Pauline Lingg, one of the lucky few. 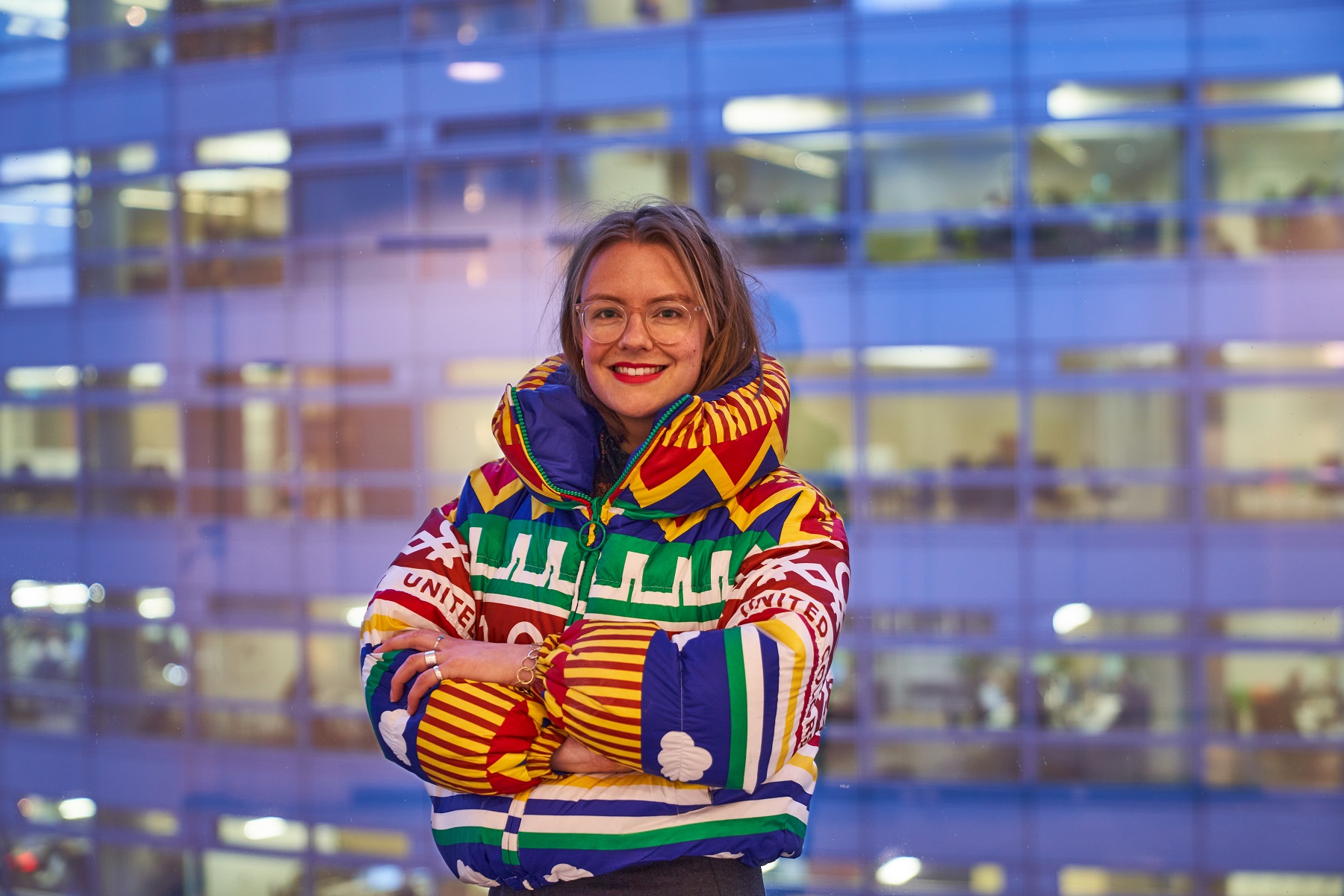 The first keys have already been issued to residents on the ground floor of The Gustav; Pauline Lingg will receive hers on 19 February 2020. ‘The time has come at last. Two years is quite a long time.’ Fortunately, the fact that she was already able to make decisions on the outfitting of her home made it all slightly less abstract. ‘I was able to choose a floor some time ago, and the kitchen is now already in place.’

An app group was also set up two years ago when it became clear who the buyers were. Lingg: ‘It already feels familiar, because nearly everyone is actively participating. We also see each other occasionally, such as when The Gustav reached its highest point.’ There’s lots of discussion on the app. ‘We’ve talked about the outfitting a great deal. Some technical issues were also discussed and we gave each other advice on such things as flooring and the layout of the studios.’

The Gustav (right) is made up of two buildings and has been developed by BPM/AM at the same time as The George (left). 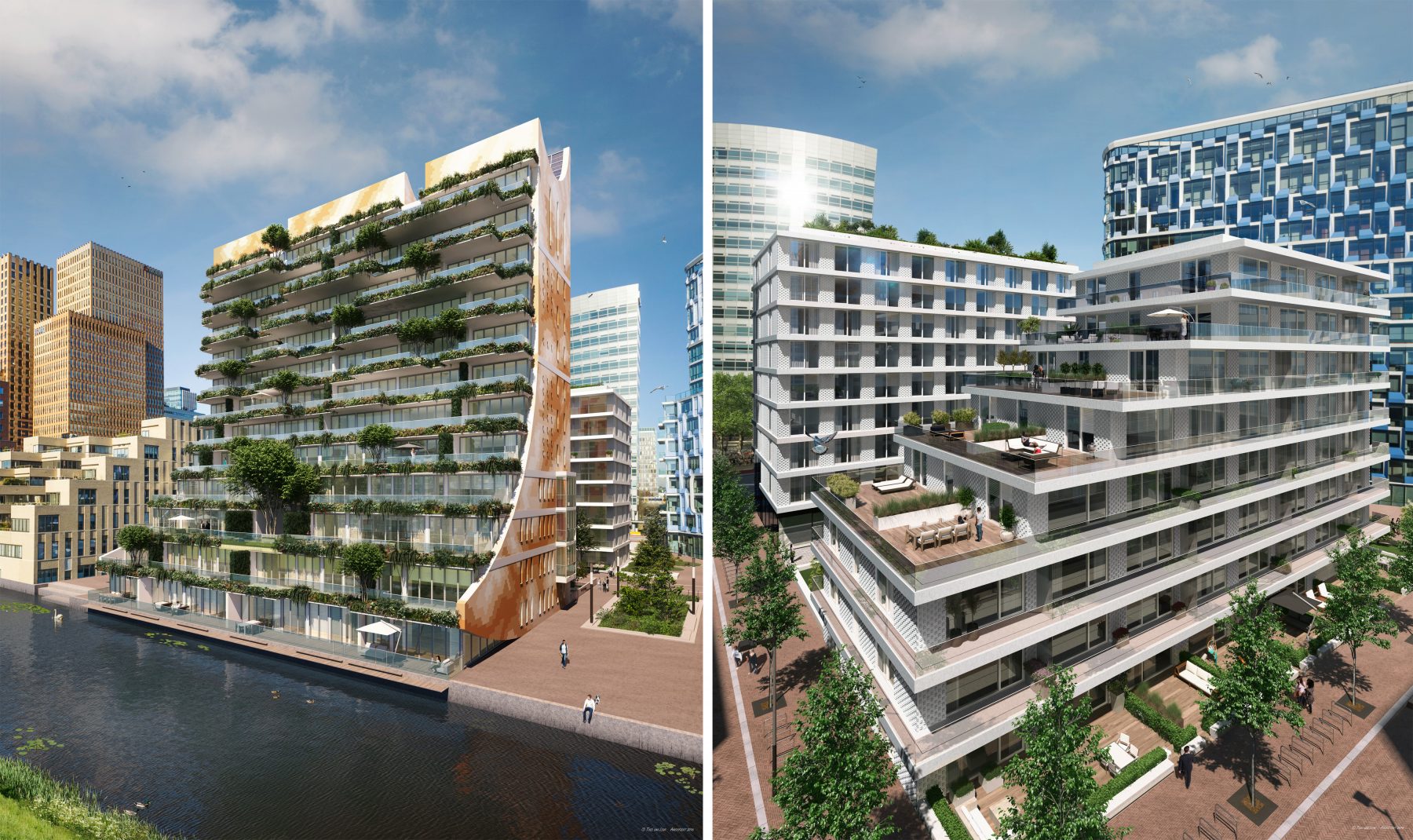 The move to Zuidas was not an obvious choice for Lingg. ‘For example, I don’t work here.’ Her friends weren’t immediately taken by the idea either. ‘Although the men tended to see it as a good investment, the women wondered whether Zuidas would be lively enough for me, because I’m often out and about in the city. I still need to get used to the idea myself, but am gradually growing into it. Zuidas may not have lovely narrow alleyways, but it does have international charm.’

Bought based on the drawing

Lingg has an apartment of 40 sq. m. ‘I did look at other parts of Amsterdam, but you always have to bid above the asking price.’ She heard about The Gustav on the grapevine, and there was just one studio left at that time. ‘I bought it based on the drawing – at that stage there was still nothing tangible to see.’ The favourable price – ‘bids above the asking price will not be considered’ – and the fact that she was allowed to have the outfitting and layout done entirely to her taste clinched it for her.

Lingg: 'It won’t be long before I get the keys'
Marcel Steinbach 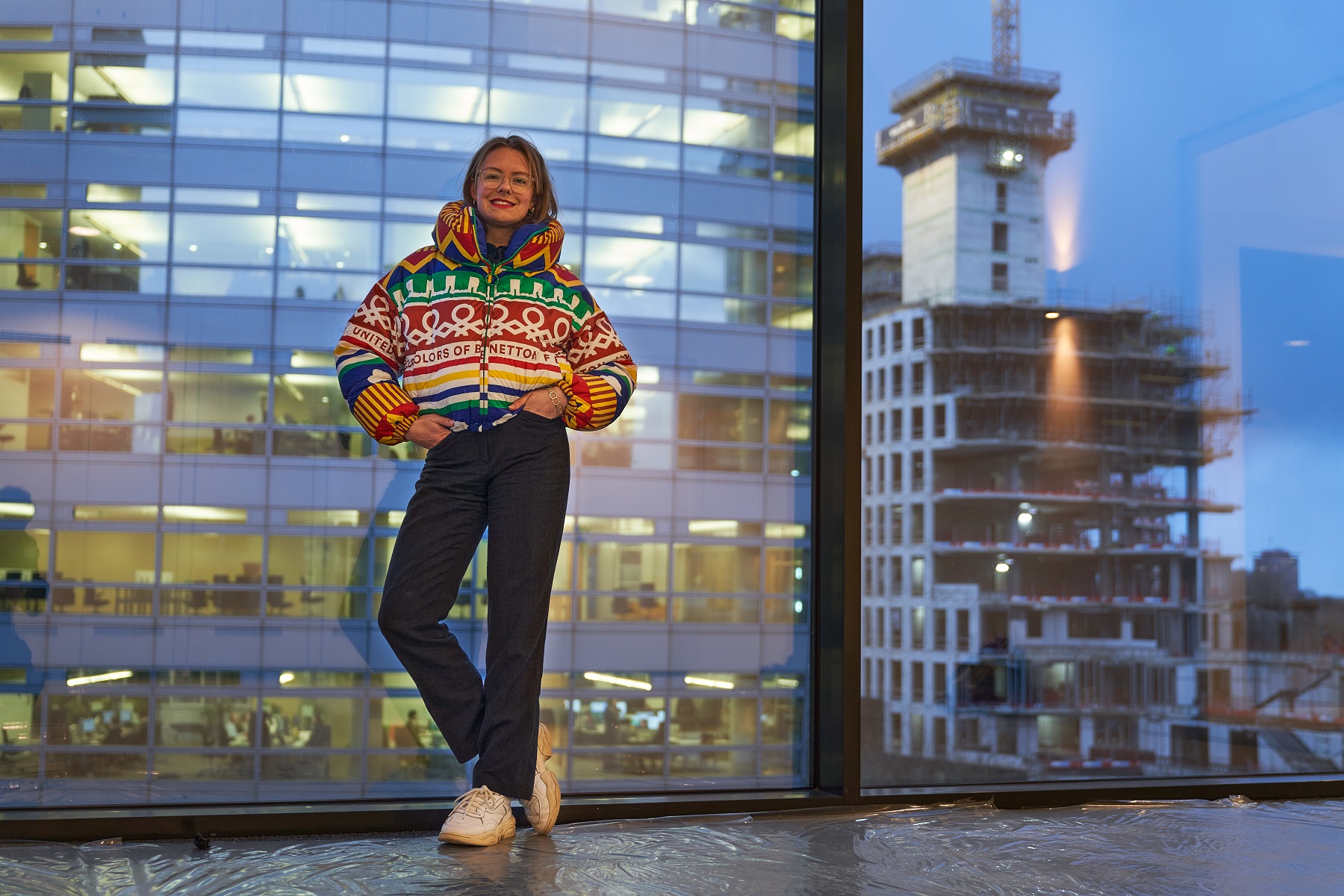 ‘I’ve had plenty of doubts over recent years’, explains Lingg. ‘Fortunately, my father is a real Zuidas fan and we’ve been here for walks and cups of coffee lots of times. Because I’m gradually getting to know the area better, it now feels more like my own neighbourhood.’ At the moment, the prevailing mood is one of joyful expectation. Her mind is made up: ‘I’ve really enjoyed living with friends, but the time has now come for a place of my own.’ It’s going to be really amazing, beams Lingg. ‘Because the apartment’s not that big, it needs to be very cleverly laid out. You have to make maximum use of every square metre and I was very careful when buying all the furniture. Precisely because it’s a tiny house, I want to have something that makes me feel happy wherever I look.’

Other things to look forward to include living with the people she’s met through the app. ‘I think we will do quite a lot together. The Gustav is particularly suited for that, because there are communal areas on every floor. How these are used still needs to be decided by all of us, but the roof terrace would be a great place for coffee or drinks, for example.’ Lingg expects Zuidas to become livelier and more fun. ‘The more people who live here, the more chance of little shops settling, for example. It’s going to be great.’

On 18 June 2022, you have an opportunity to see the real Zuidas. During Dutch Building Day, you can gain access to construction sites and we’ll show you around the neighbourhood. Join us in Mahlerplein, right next to Amsterdam Zuid station. It promises to be a fun day out, including for children.
May 27, 2022

OBA NEXT not coming to Zuidas after all

OBA NEXT, the innovative and inspirational location for learning and development, will not be coming to Zuidas after all. This was made clear in the coalition agreement presented by the new municipal council on 25 May 2022. The development will be moved to Amsterdam Zuidoost instead.
May 18, 2022

Are you interested in the renovation of Amsterdam Zuid station? Would you like to get an insider's view of the best buildings and construction projects? Perhaps you have an interest in architecture, art or urban landscaping? If so, join us on Dutch Building Day in Zuidas on 18 June 2022.
More posts