The major Zuidasdok project now has a new schedule. The original plan was for a single contractor to work on all of it. The project has now been divided into parts, some of which will be happening simultaneously. So, what can you expect? 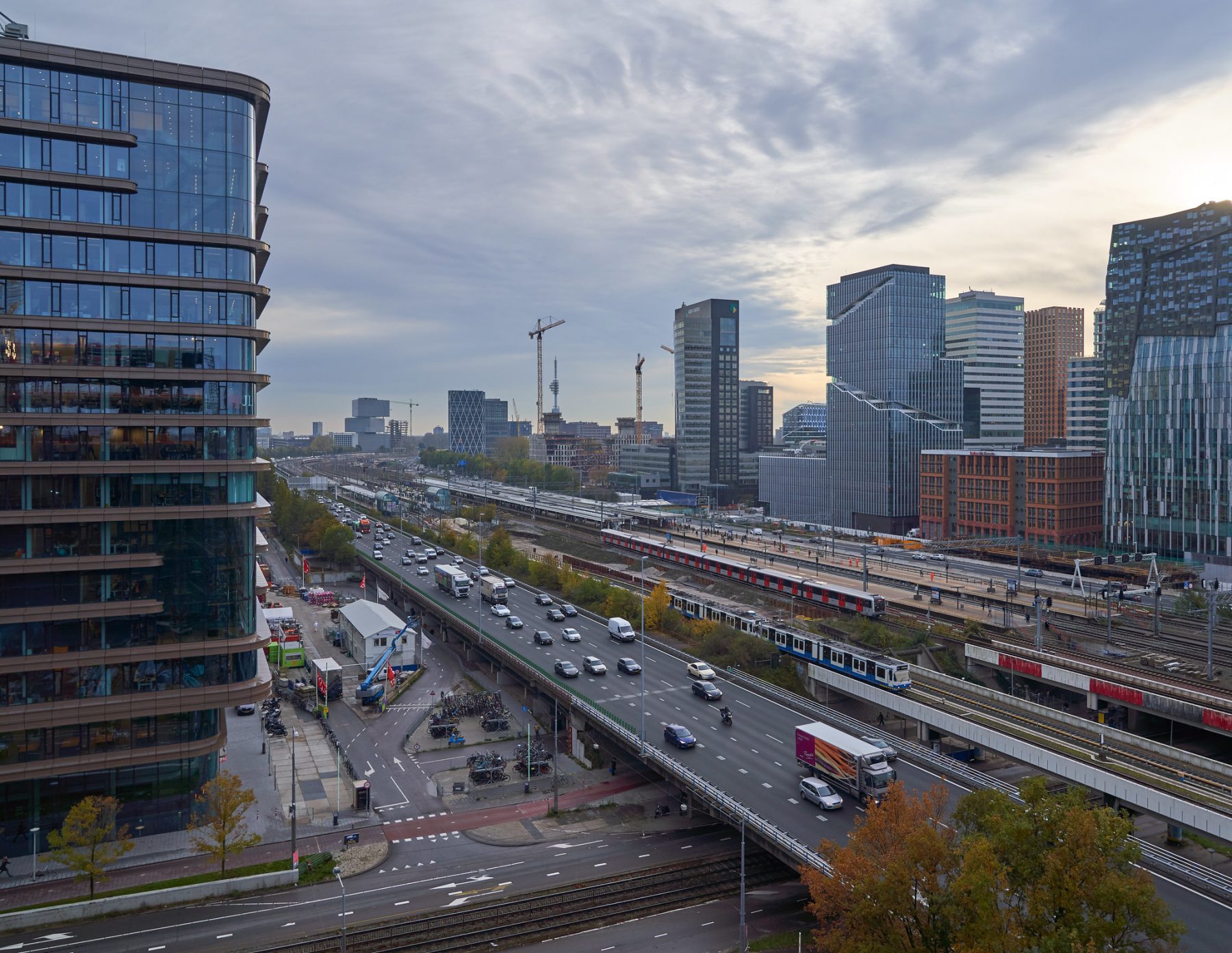 As things currently look, we will be demanding quite a lot from commuters in the period around 2025-2026. That’s when we will be working on the reconstruction of the De Nieuwe Meer and Amstel interchanges. Construction work on the tunnel for the southern lanes of the A10 Zuid will also have started by then. We will be working on the final touches of the additional passenger tunnel at Amsterdam Zuid station, the Brittenpassage. And we will be beginning major renovation work on the existing entrance – Minervapassage. So, what does the new schedule look like?

Numbered according to the latest date of completion 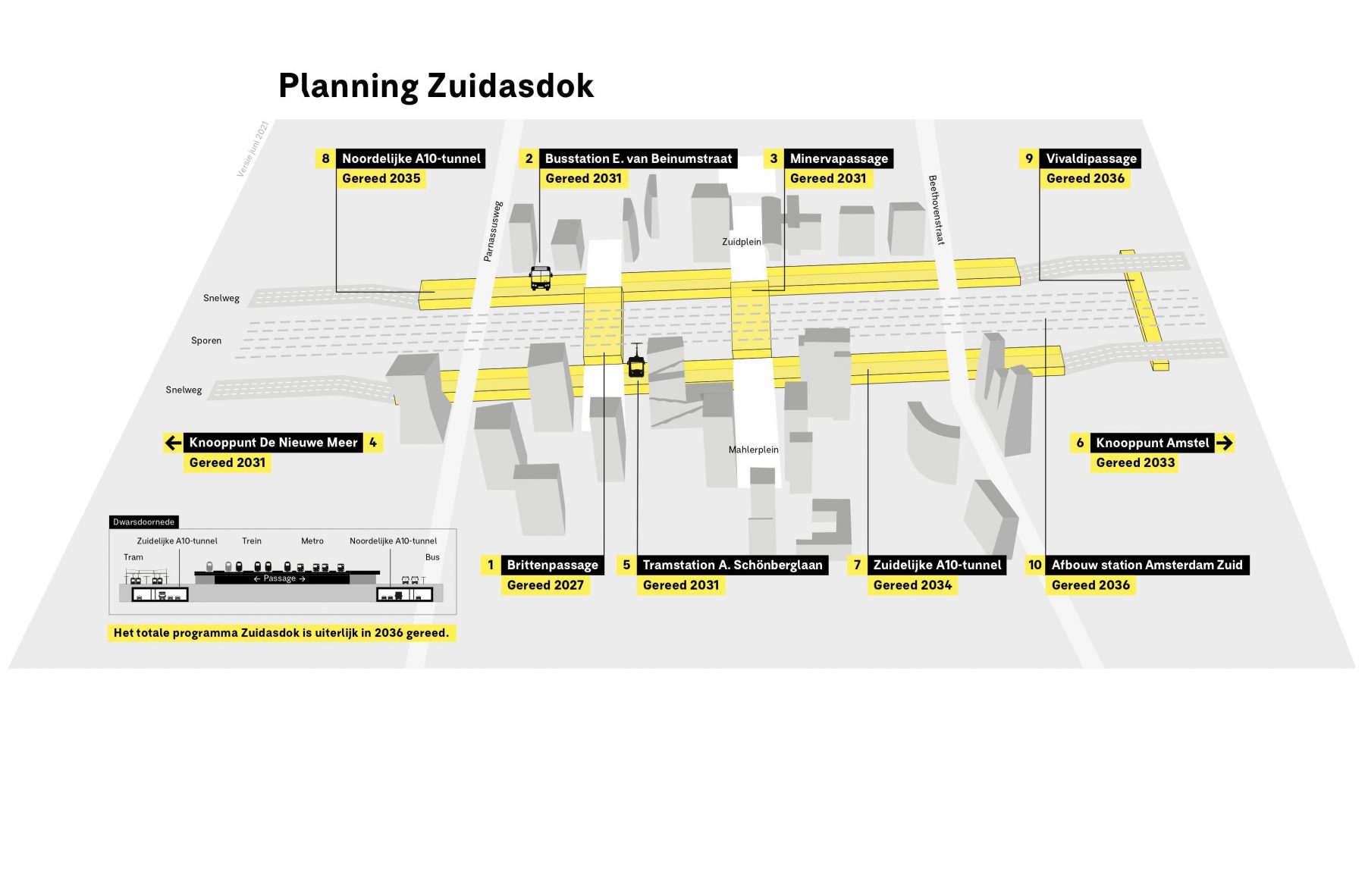 We have been working on the Brittenpassage since the autumn of 2018. In August 2021, we will be inserting two roof sections into position. According to the current schedule, this passageway will be completed in 2027 at the latest.

In 2023 or 2024, work starts on the reconstruction of the De Nieuwe Meer interchange. This highly complex operation also includes the bridges over the river Schinkel. The announcement of the tender for this project was published on 29 June 2021. The reconstruction will be completed in 2031 at the latest.

In order to make room for the station, the A10 will be diverted through tunnels in the centre of Zuidas. Construction work on the tunnel on the southern side starts between 2024 and 2027. We expect the tunnel to open in 2034 at the latest.

As soon as the new Brittenpassage at Amsterdam Zuid station has been completed, renovation work will start on the Minervapassage: between 2025 and 2027. The Minervapassage currently serves as the entrance to the station, but will ultimately look completely different, partly because it will be made much wider. The new Minervapassage is set to open in 2031 at the latest.

Between 2026 and 2029, work will start on the northern tunnel. In 2022, the Amstel tram (line 25) will be given start and end stops (on Eduard van Beinumstraat), in anticipation of its final position on the southern side of the station. The northern tunnel for the A10 Zuid is set to open in 2035 at the latest.

When the southern tunnel for the A10 Zuid reaches a sufficient level of completion, building work can start on the tram station. This will actually begin while underground work is still proceeding on the tunnel. The tram station is expected to be completed in 2031 at the latest.

The new bus station will be on the northern side of Amsterdam Zuid station. Construction work on this will also start while underground work is still underway on the tunnel. The bus station is scheduled for completion in 2031 at the latest.

Finally, there is the underpass that will provide a link for cyclists and pedestrians between Antonio Vivaldistraat – on the southern side of the A10 – and Beatrixpark on the northern side. This work has also already started, but is set to continue for a long time. We will be building sections of this underpass throughout the whole of the period of construction work on Zuidasdok. This is because of the need to move in line with changes on the A10 Zuid. The final construction work on the Vivaldipassage will be completed when the A10 is in its final position. We expect it to open in 2036 at the latest.

The new Amsterdam Zuid station will have platform roofs that are 6 metres tall. So how do you expect to maintain them? This is not the only maintenance challenge that required a solution in the design of the new station. ‘It involves a lot of thinking and solving of puzzles.’
reizen-en
September 23, 2021

Three roof sections are now in place under the tracks for the new pedestrian passageway at Amsterdam Zuid station. The construction sites look neat and tidy, but appearances can be deceptive. By popular request, here is a preview of the next phases of the work.
reizen-en
September 21, 2021

Amsterdam Zuid station is set to have new metro platforms, between the existing passageway and the new passageway currently under construction. We will need to make space for them. So, how will this be done and how will it affect passengers and local residents?
More posts